One of the best day trips (i think) from Amsterdam, is a visit to the Zaanse Schans and if you like to pack a lot into the day, continuing onto The Hague.

I recommend doing this itinerary on a weekday if you can to avoid the weekend crowds. I did this on a Thursday in early October – there weren’t many people at either destination.

Catch the 7:53am train from Amsterdam Central Station. Yes this is an early train time – you want to beat the busloads of tourists that arrive at 10am and get pictures without people in them!

Ask the person at the information centre / counter at Amsterdam Central Station if it’s better value to get a one day public transport pass or to buy individual open-ended tickets for the day (tell them the destinations). When I was researching online it looked like a one day public transport pass was going to be cheaper, but it actually ended up that individual tickets were cheaper.

8:11am arrive at Zaandijk Zaanse Schans station, then walk 1.5km to Zaanse Schans. You’ll pass the yummiest smelling cocoa factory. If you visit in October like I did, make sure you take an umbrella as it bucketed rain on the short walk and there isn’t any shelter.

8:30am arrive at Zaanse Schans – it’s very small but there are lots of things to take photos of (before the crowds arrive)

The houses on the opposite site of the river 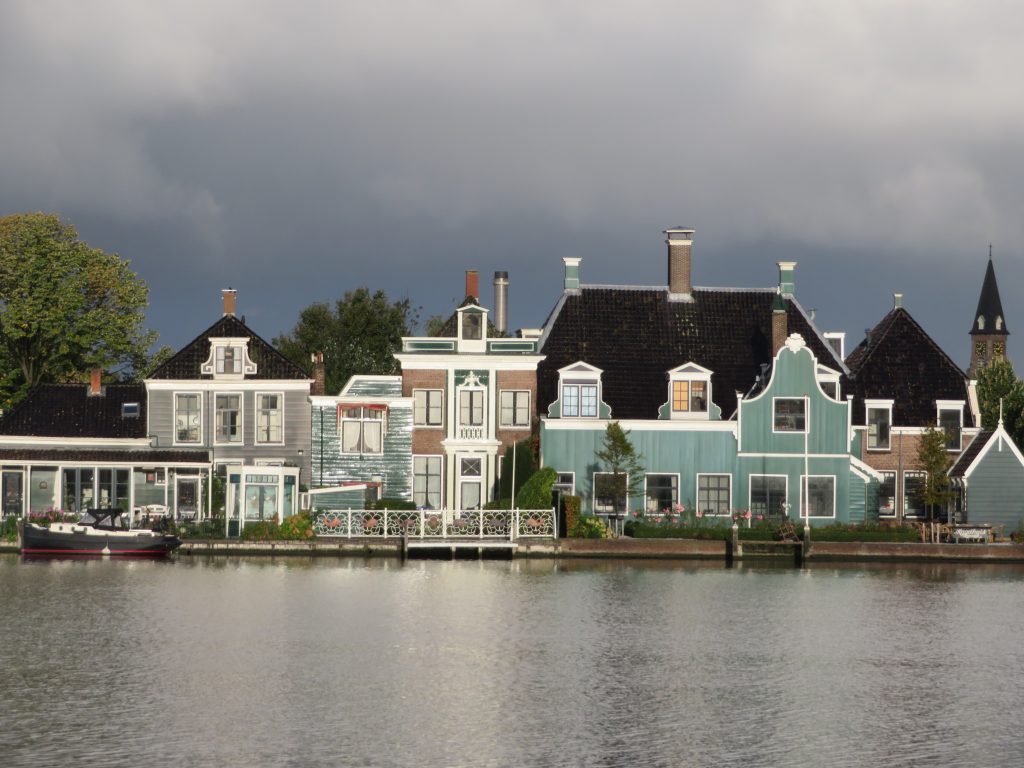 The little street with the shops 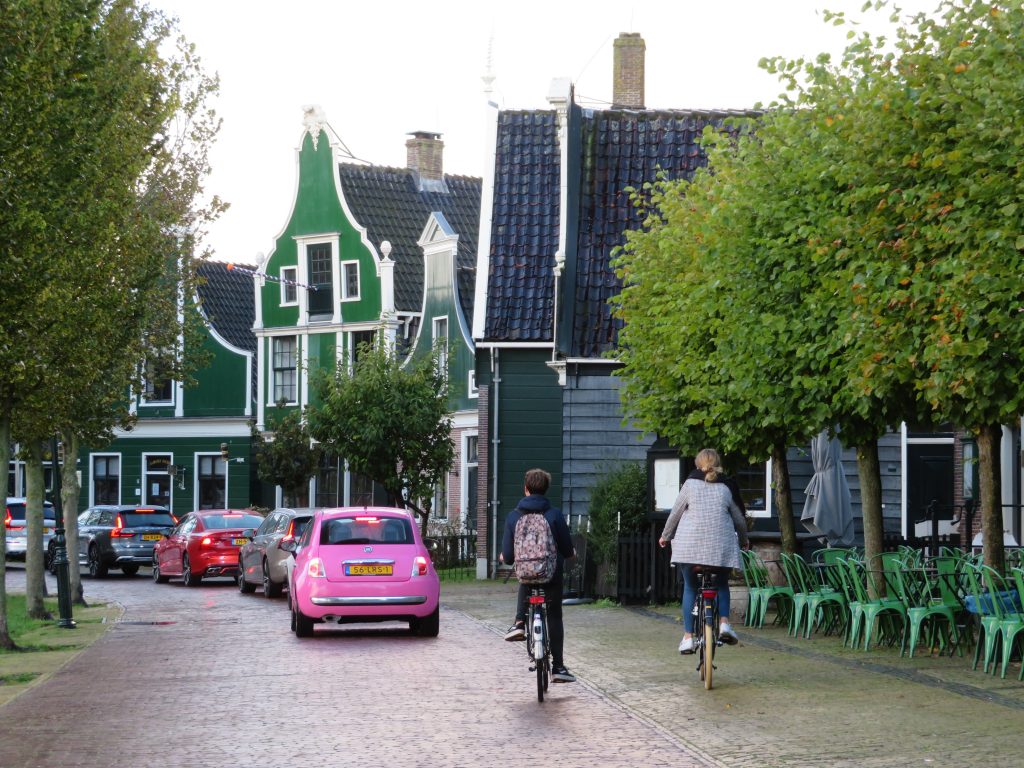 The houses with the bridge 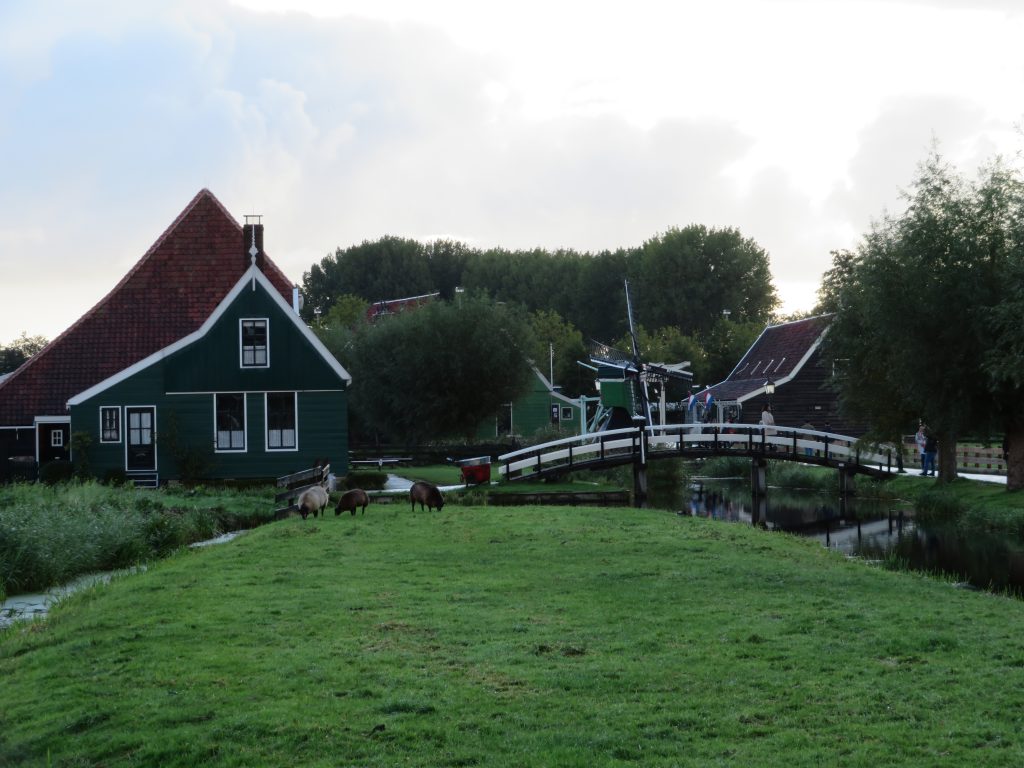 The lighting was very hit and miss. It went from blue sky to grey, to dark grey and rain, to a rainbow and then blue sky again… all in the space of a few hours. 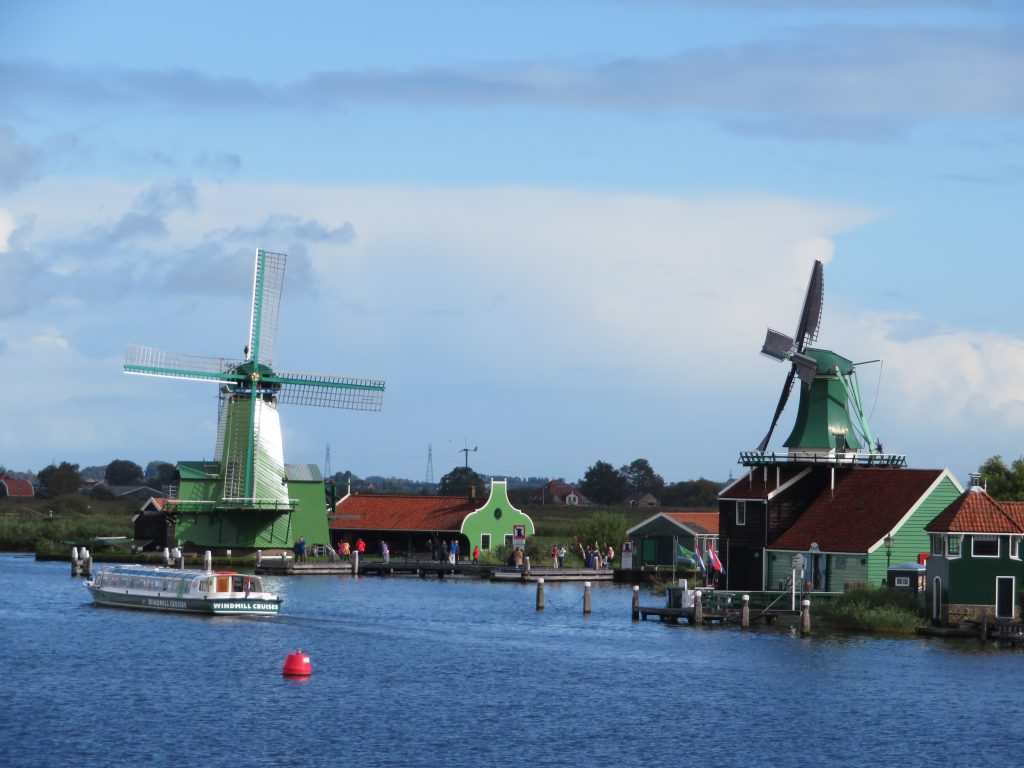 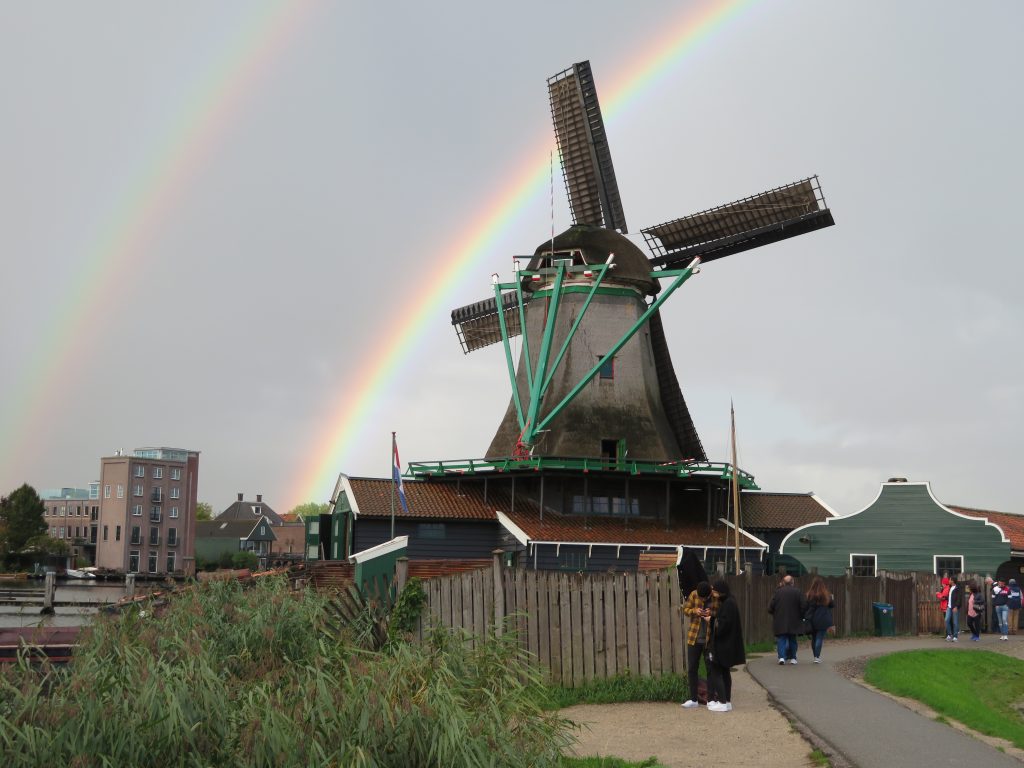 Once things start opening up around 10am, purchase the Zaanse Chans Card you can get from one of the shops for 15 euro. It includes entry into a windmill and some other perks. I only wanted to go inside one windmill and not use the rest of the stuff on the Card, so it ended up being cheaper to just choose a windmill and pay the entry fee when I got there.

i opted for the peanut windmill which may sound like a strange choice but it was the least crowded and still interesting. I also wanted to go up one of the windmills in the middle to get better photos of everything (if you climb up the ladder you can go up onto the roof).

Make sure you visit the little chocolate shop. They do a demonstration showing how it goes from the seed to the finished chocolate. I bought a hot chocolate, a brownie (yum!) and some hot chocolate to bring home. Well after lugging that around Europe for another 3 weeks, I got home, went to my local Coles supermarket… and saw it there for cheaper than what I paid – oops (it’s in the imported foods section not with the other hot chocolates if you’re an Australian reading this). The brand is Van Houten Cocoa Powder. 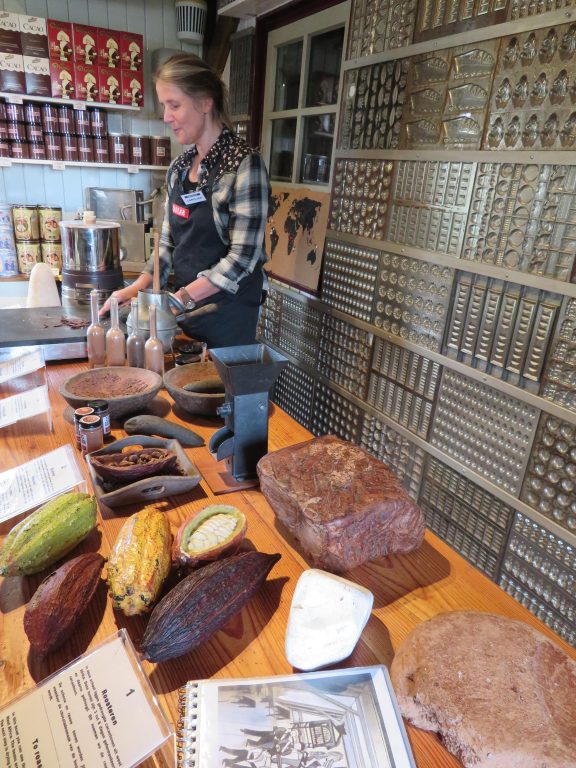 Make sure you get a photo of you standing in the giant clogs outside the clog workshop and then watch the demonstration inside. 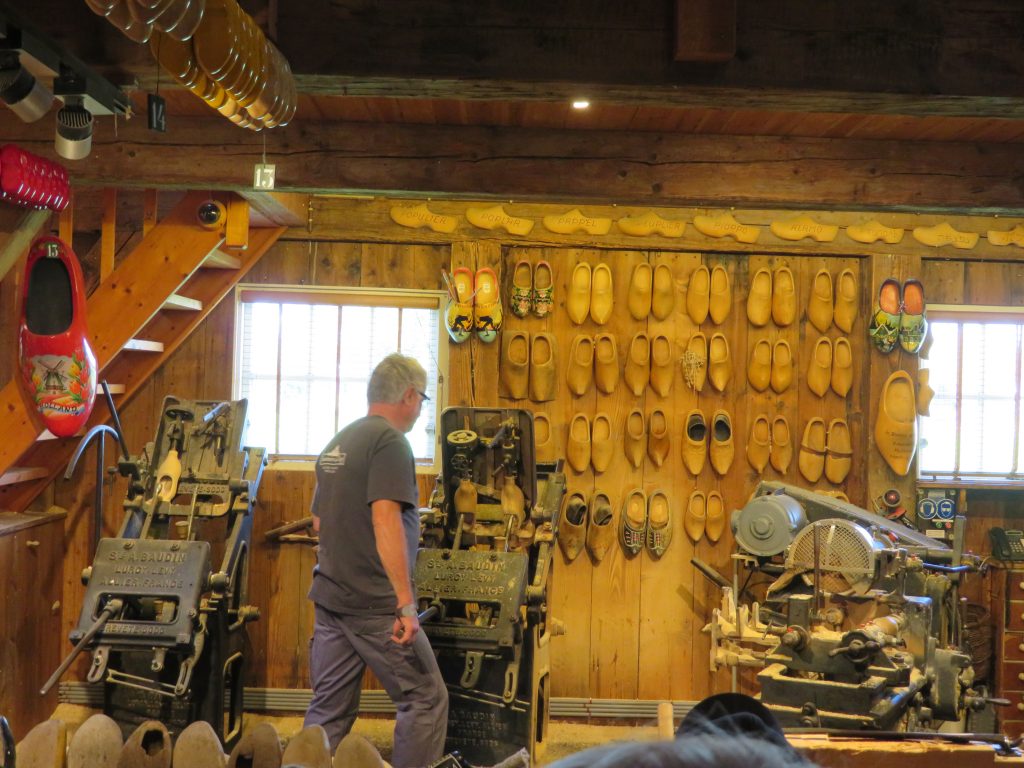 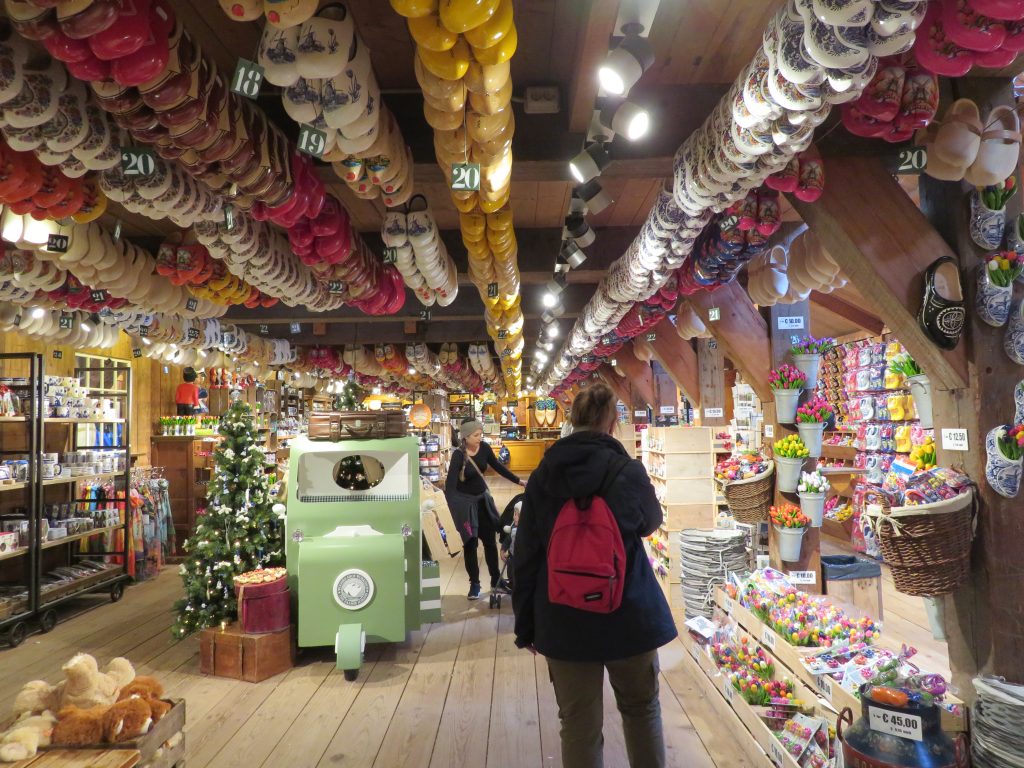 The Henri Willig Cheese Company has plenty of cheese (and cheese samples plus some yummy chocolate). You’ll see this shop in Amsterdam but the shop in Zaanse Schans is much bigger. 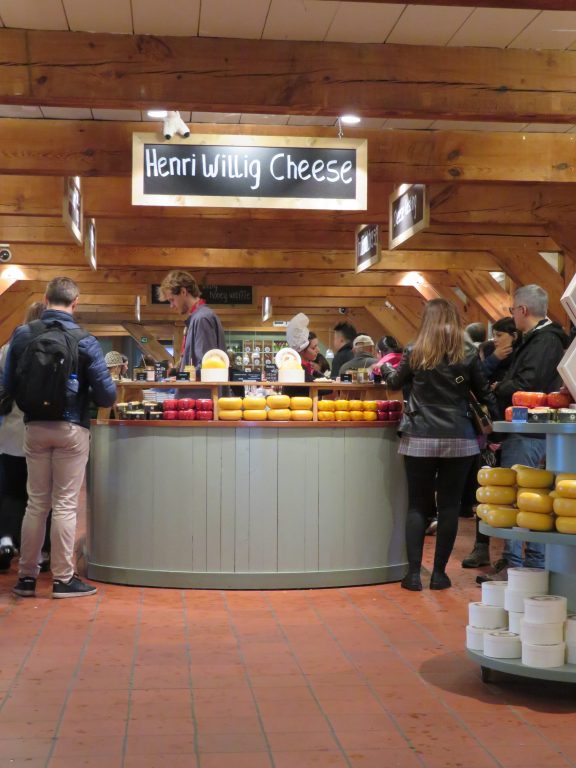 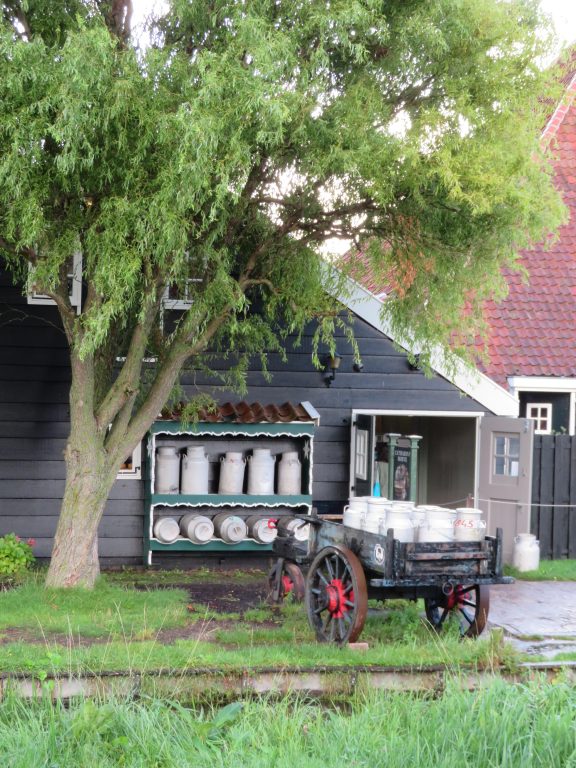 There are various other bakeries, gift shops etc. to peruse as well. 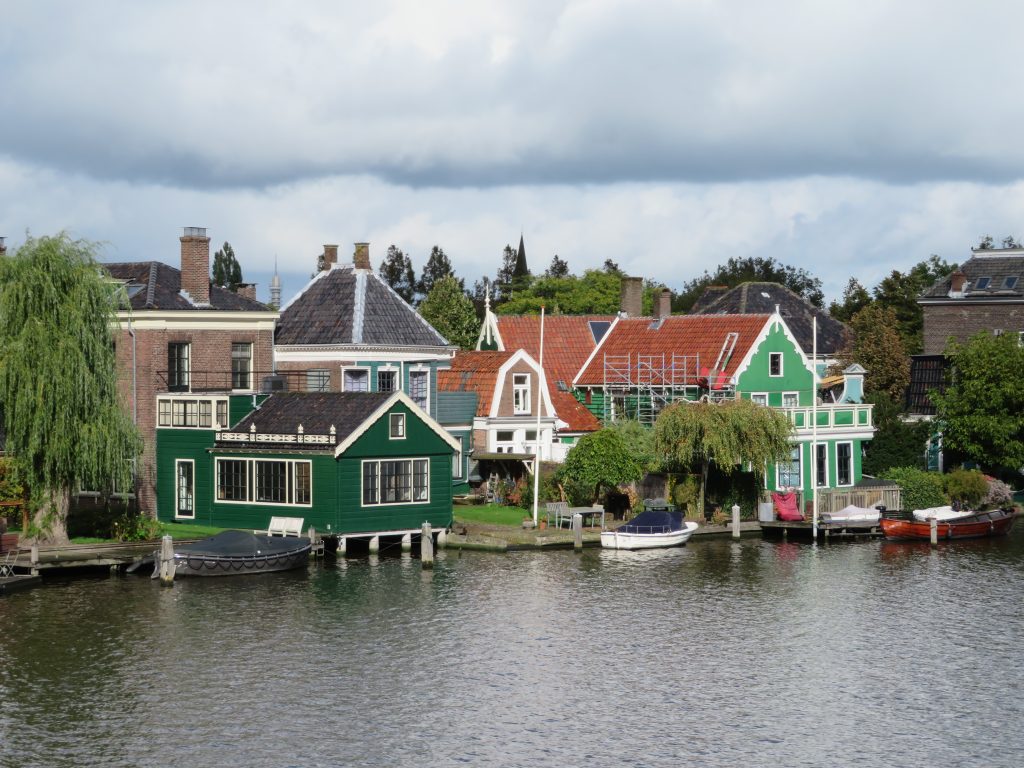 There were a ton of postcards in the gift shops showing these green fields in front of the windmills covered in tulips – I’m definitely going back in spring to see that!

The view from the lookout near the clog workshop: 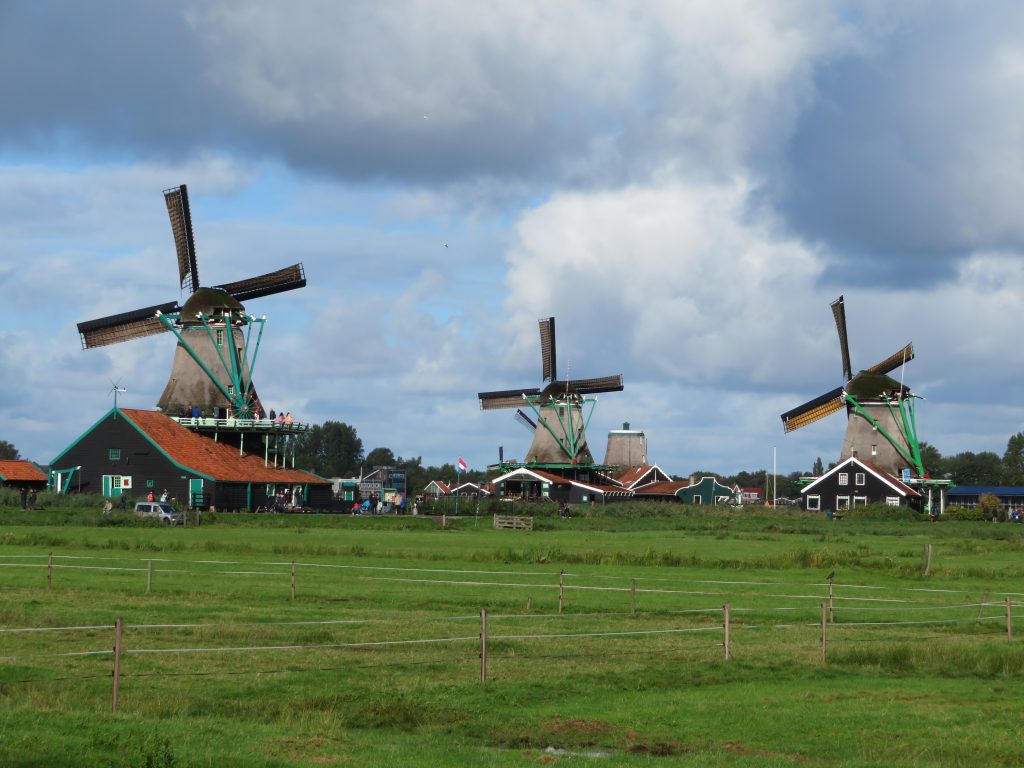 Before leaving Zaanse Schans use the toilet in the Zaans Museum – it’s the modern building near the clog workshop (like most toilets in Europe, you do have to pay – I think it was 0.50 euro which seemed to be the going rate).

When you’re finished at Zaanse Schans (probably around midday), head back to Zaandijk Zaanse Schans station. If you’re lucky, you might time them opening the bridge so a boat can go through like I did: 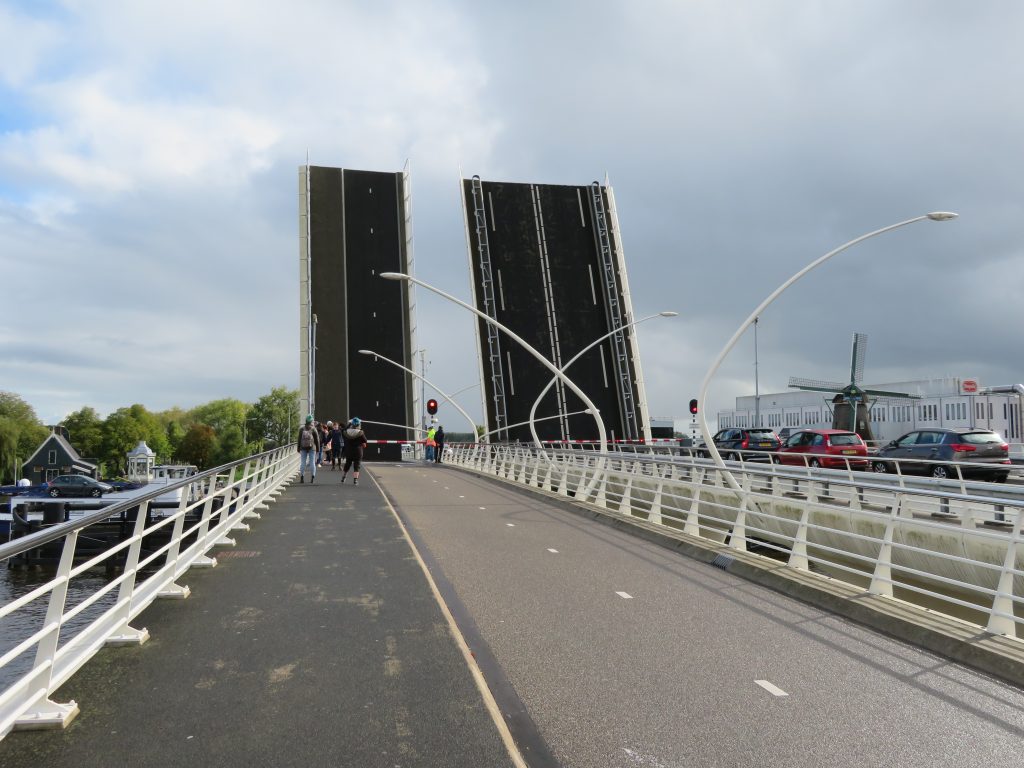 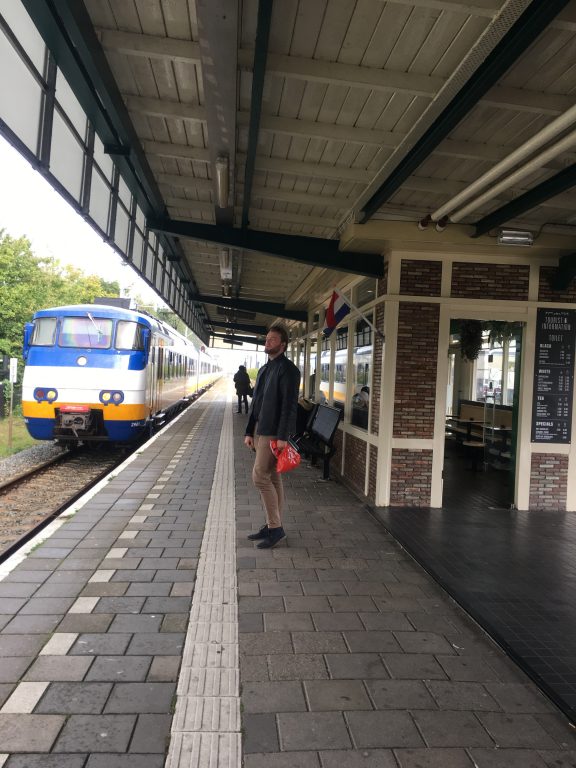 To get to The Hague first you’ll have to go in the opposite direction a few stations back towards Amsterdam and then switch trains at Leiden Station. There was about 5 minutes between trains. The journey from Zaanse Schans train station to The Hague took about an hour. 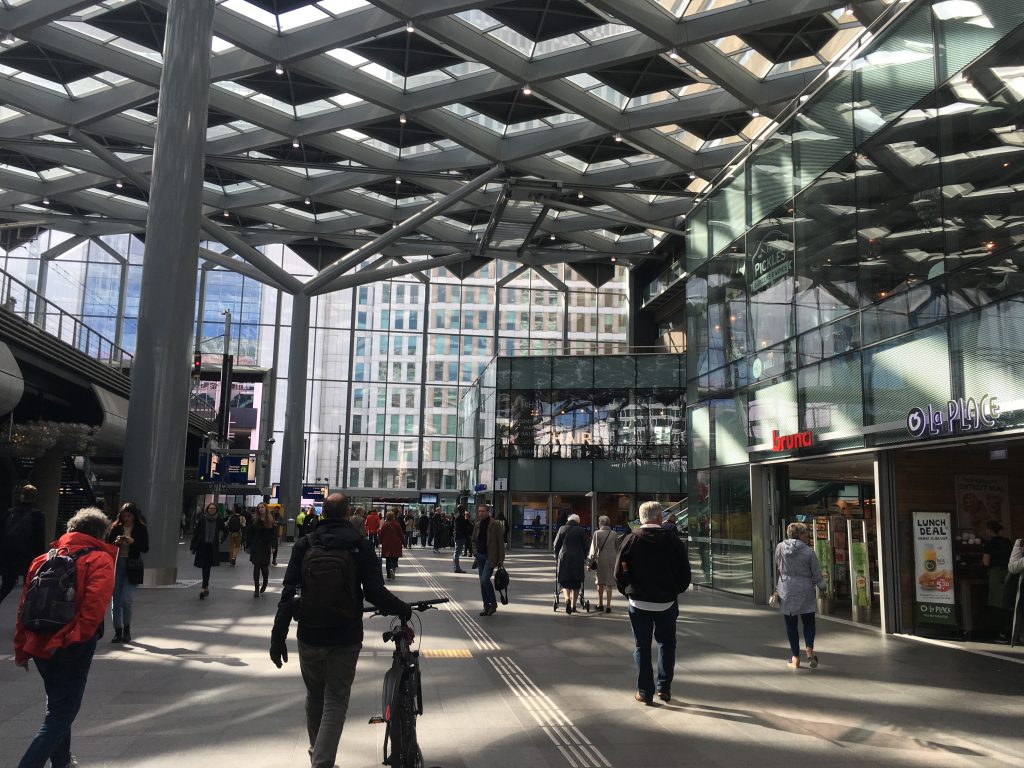 Once you arrive in The Hague, have some lunch or do what I did and skip it in favor of some Poffertjes – yum!

I went to Will’s Pancake House (slow service but were very yum!) 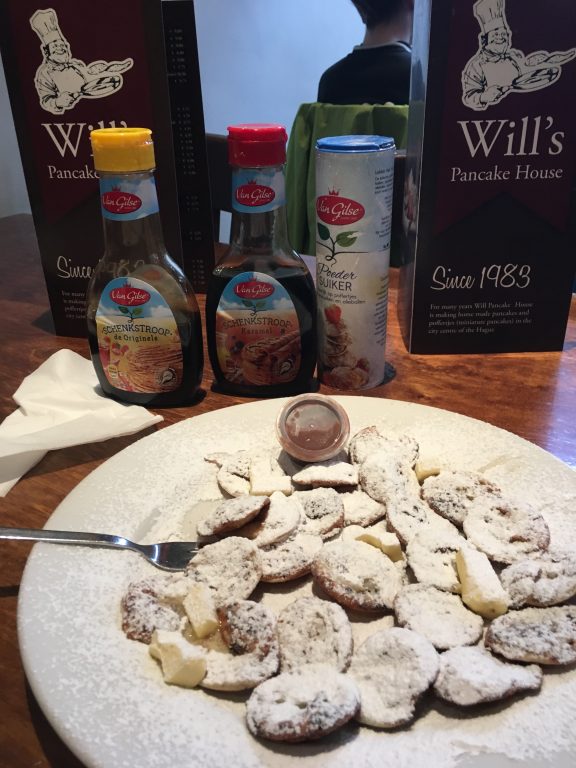 Make sure you walk around the The Houses of Parliament, wander around the CBD, the alleyways and the shopping malls in buildings with grand interiors.

I’ve seen photos of a great view from The Hague Tower but the weather was miserable and rainy when I was there so I skipped it. 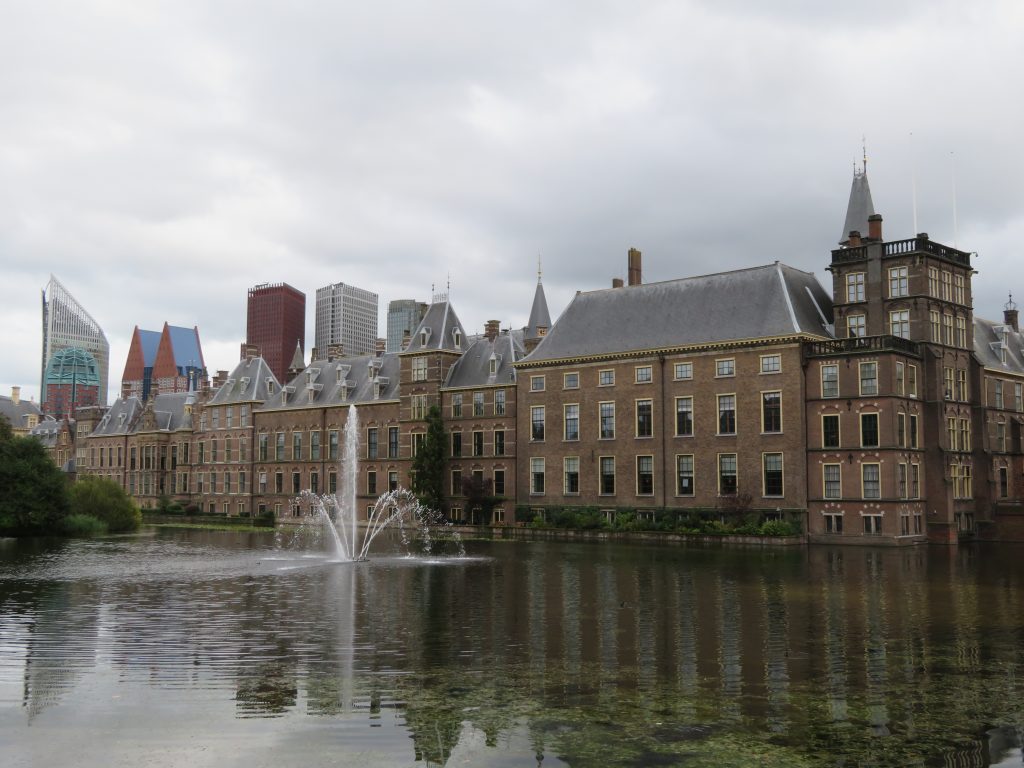 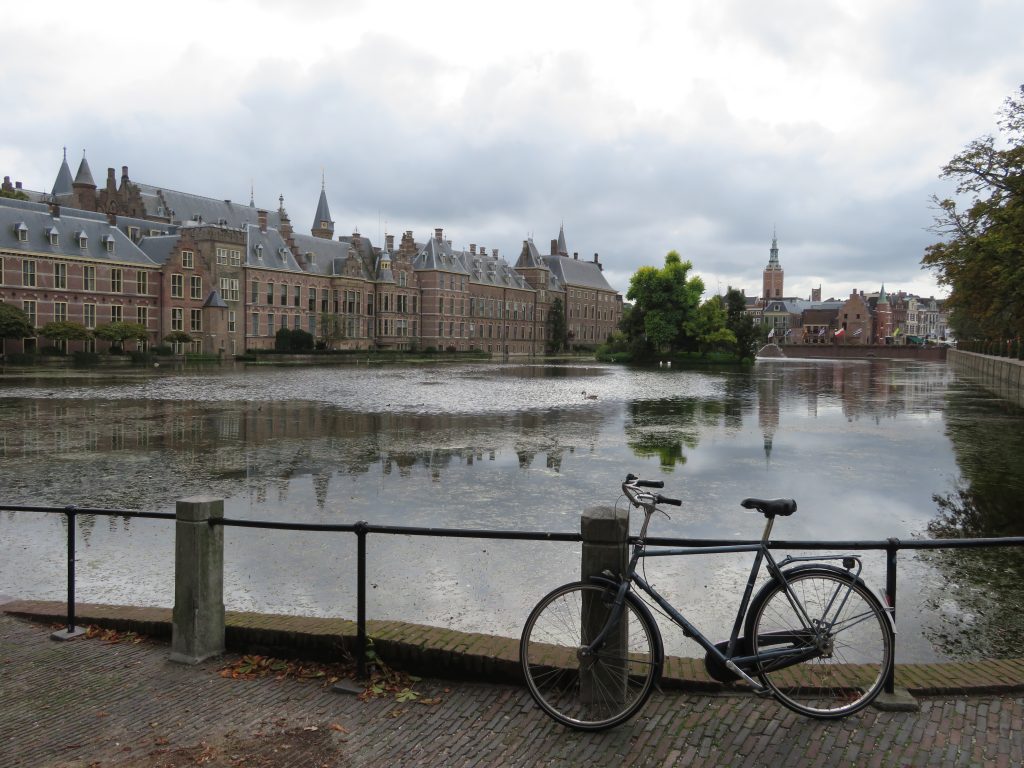 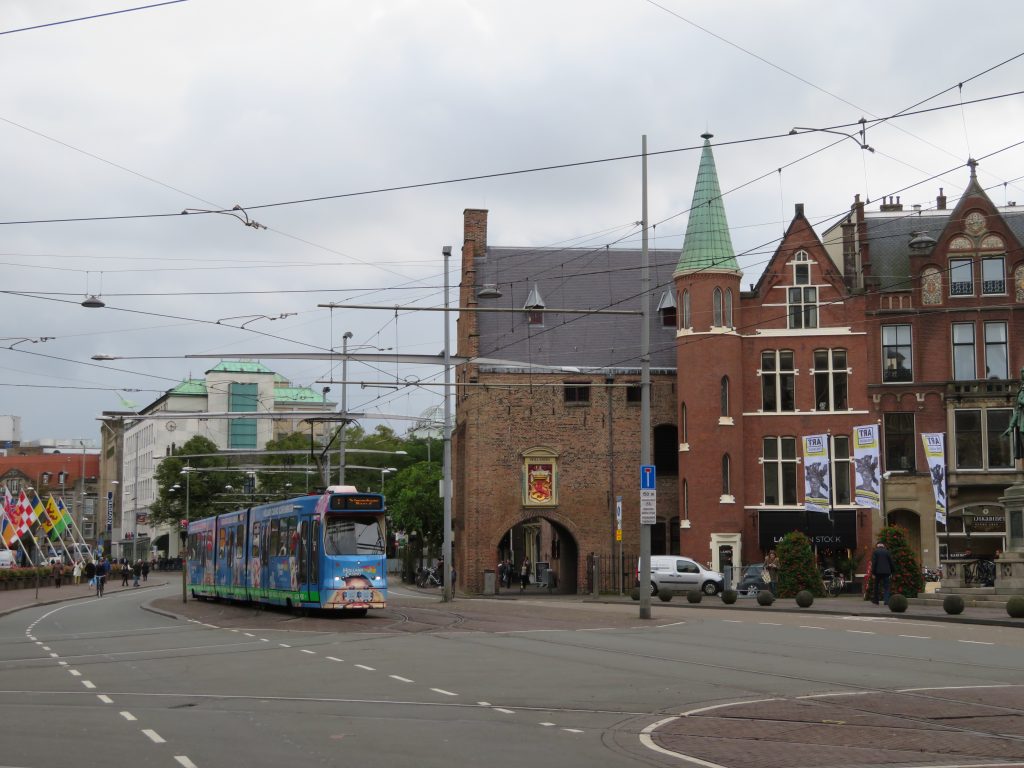 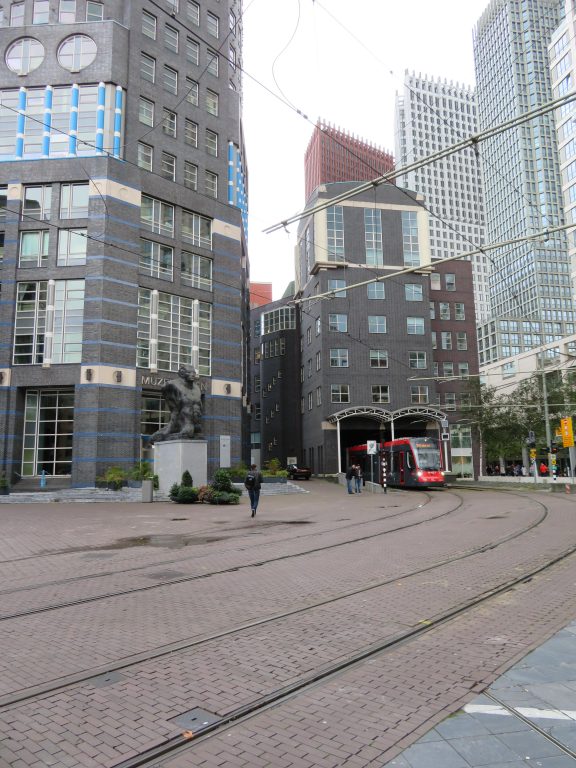 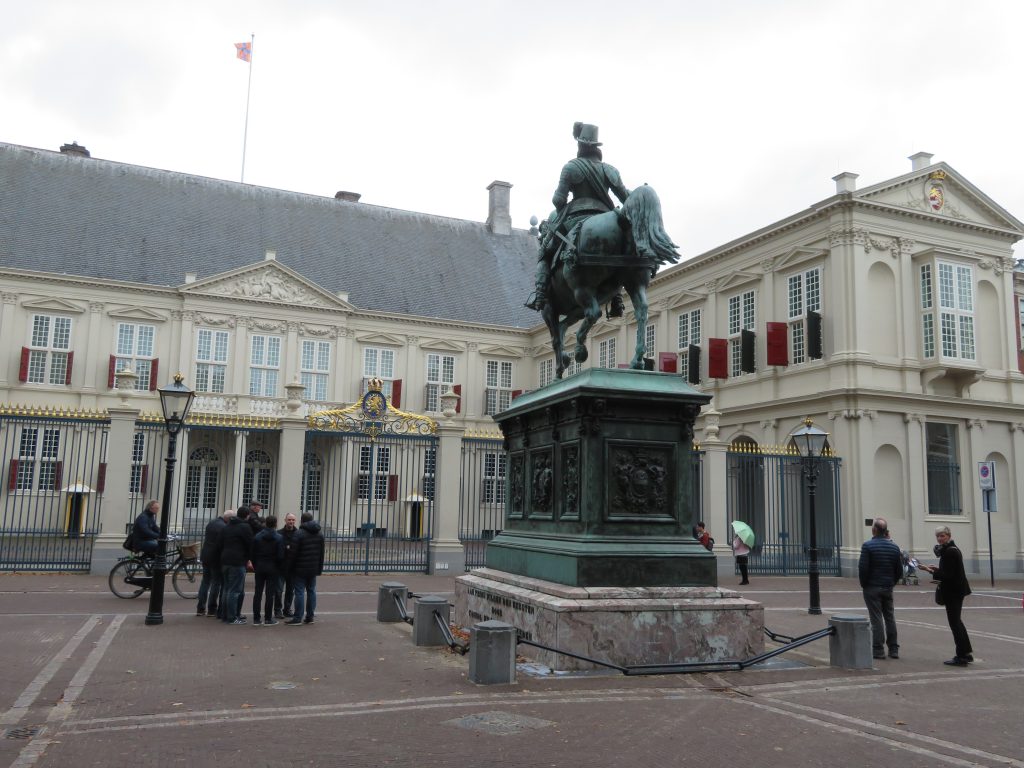 Out the train window on my way back to Amsterdam I could see huge fields of flowers (not sure what they were but they weren’t tulips) and that was impressive enough. I’m super keen to go back during spring!

Cost to go yourself versus joining a tour bus

Prices current as of the time of writing this (May 2020).

Amsterdam’s transport system was very easy to navigate – I highly recommend using it instead of joining a tour bus.

My cost to visit

I had looked up train ticket prices online before the trip and was expecting it to be cheaper than this but after not being able to figure out the self-service ticket machine and going to the info counter to ask, the lady there insisted it was cheaper to get 2 separate tickets instead of a day ticket. I may have been ripped off or the info I read online may have been wrong or been outdated by the time I got there, either way, this was the cost: 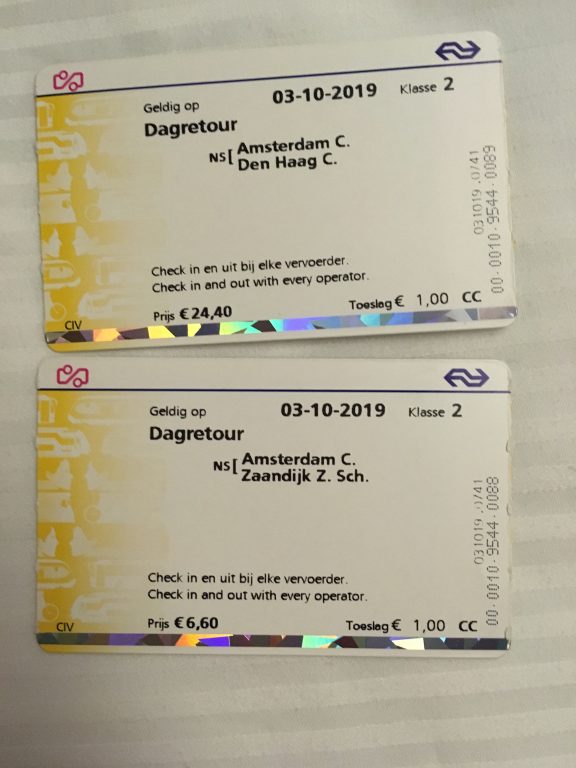 If you don’t do The Hague the cost would’ve been only 6.60 euro to only go to Zaanse Schans and back (approx $11 AUD).

Most of the day tours seem to have these itineraries (approximate prices).

Keep in mind that they pack around 50 people per bus on these day tours, they’re very popular so good luck finding a tour company that does a mini bus style tour only.

If you don’t feel comfortable taking the train and only have the chance to do 1 day trip from Amsterdam, I would do Zaanse Schans, Volendam and Marken (I split this over 2 days and added The Hague).

Another option is the Hop on Hop off dutch countryside bus for around $65 AUD which stops at Zaanse Schans, Volendam and Edam. This is a good option but it skips Marken which is why I decided to do a DIY itinerary and use public transport instead of joining a tour. Plus I find a lot of time can easily be wasted waiting at the bus stop for these hop on hop off tours if you don’t time to the bus or it’s running late.

See the rest of my Netherlands itinerary in this post.