If you search Air Baltic reviews on Google you’ll find many negative reviews, comments about strict bag limits and comments like ‘avoid flying with them’. So why did I fly with them? They were the only flight option from Vilnius, Lithuania to Amsterdam, Netherlands on the day I needed to fly. So was it really as bad as all the online reviews say it is?

In my opinion: yes 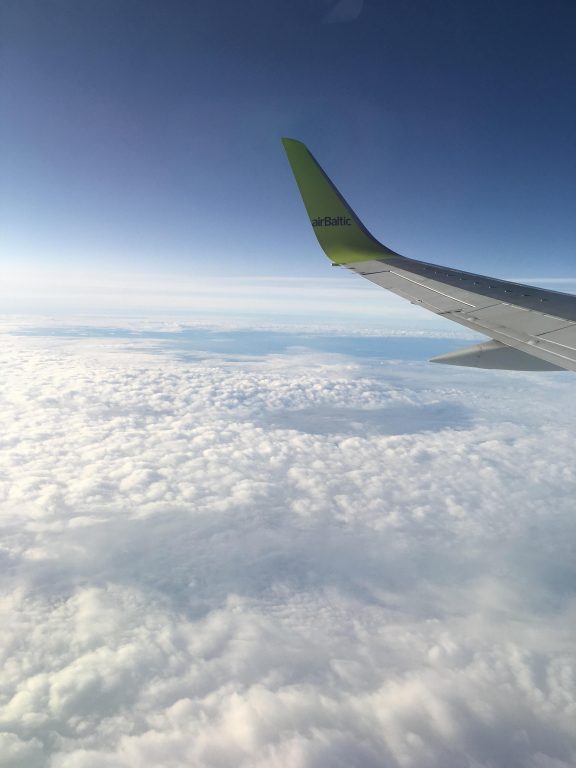 It all started the night before the flight…

I’m from Australia so travelling all the way to Europe you gotta make the cost and 24hr one-way journey worthwhile. I wouldn’t ever go to Europe for any time shorter than 3 weeks (ideally 5- 6 weeks). My last trip to Europe was a 6.5 week trip.

The stationery shopping I’d done in Copenhagen and Finland in the 3 weeks before that, combined with the discovery (and subsequent addiction) to Fazer and Marbou chocolate… well my bag was 20kg. Which normally isn’t an issue for internal European flights, except for Air Baltic’s carry on bag weight. You’re only allowed 7kg and this is to include your main cabin bag (e.g. a small wheel suitcase) plus you handbag. My small wheel suitcase is already 2.7kg, add a small laptop, noise cancelling headphones, some snacks and it was 6.5kg already. Which wouldn’t be a problem except my cross body dag bag weighed about 2kg. If they were to weight the 2 bags at the same time, I would’ve been over their tiny bag limit and up for a 60 euro fine.

If I were to move the excess from my carry on to checked baggage, and then exceed the checked bag weight limit – that’s another 50 euro on top.

I was travelling with both of my parents and 1 sister. 2 of them had been travelling for a month and are not light packers to begin with… combine my dad’s love of buying touristy t-shirts and my sister buying too much chocolate and shoes, everyone was over the bag limit.

We thought, ok let’s just pre-purchase extra baggage in advance and save the hassle with dealing with it at the airport.

Good idea but… if you want to purchase extra luggage you needed to do so sooner than 48hrs before your flight. Since we missed the time cut off and knew our bags were over 20kg (each of us was travelling for between 4 – 7 weeks), we decided to make 1 checked bag overweight and keep the rest under the 20kg.

I was so glad I’d spent $20 on a digital bag weigh scale before we left home so we could test the bags before we got to the airport. We were Googling in the hotel room the night before to see if they’re strict. As expected, there were tons of reviews of people complaining about the bag limit – that their bag was only 200g only and they got slapped with the fee. Someone even said Air Baltic weighed their winter coat with their carry on luggage so they could slug them with an overweight bag fee.

We decided to send my sister’s overweight bag first and thankfully the person at the counter was so distracted eagerly telling her how to go pay the baggage fee, I managed to sneak through with my carry on suitcase plus cross body bag (which were about 9kg as I travel with a small laptop). The person at the counter only weighed my carry on wheel bag, not my cross body bag. I did ‘subtly’ push this behind my back bad it was easy to see the giant strap across my body so it was still quite obvious I had 2 bags. I was the only person in our group who didn’t have both bags weighed.

Make sure they add tags to your carry on bags at the bag drop counter, as they were re-weighing bags at the gate before boarding. There was quite a few heated discussions between passengers and ground staff as they made people go to another service desk at the other end of the airport (they weren’t giving many directions / instructions on where to find the other counter) to pay the 60 euro overweight bag fee, then they had to run back to board the flight before it closed. The flight crew made it clear to passengers they weren’t boarding the flight until they presented the receipt for their overweight luggage and weren’t going to hold the plane while they went and paid.

You can check in online or via mobile. Great. Make sure you have a digital copy because if it’s a paper copy it must be printed on A4 paper. I wonder what happens if you print it on US letter size paper…? 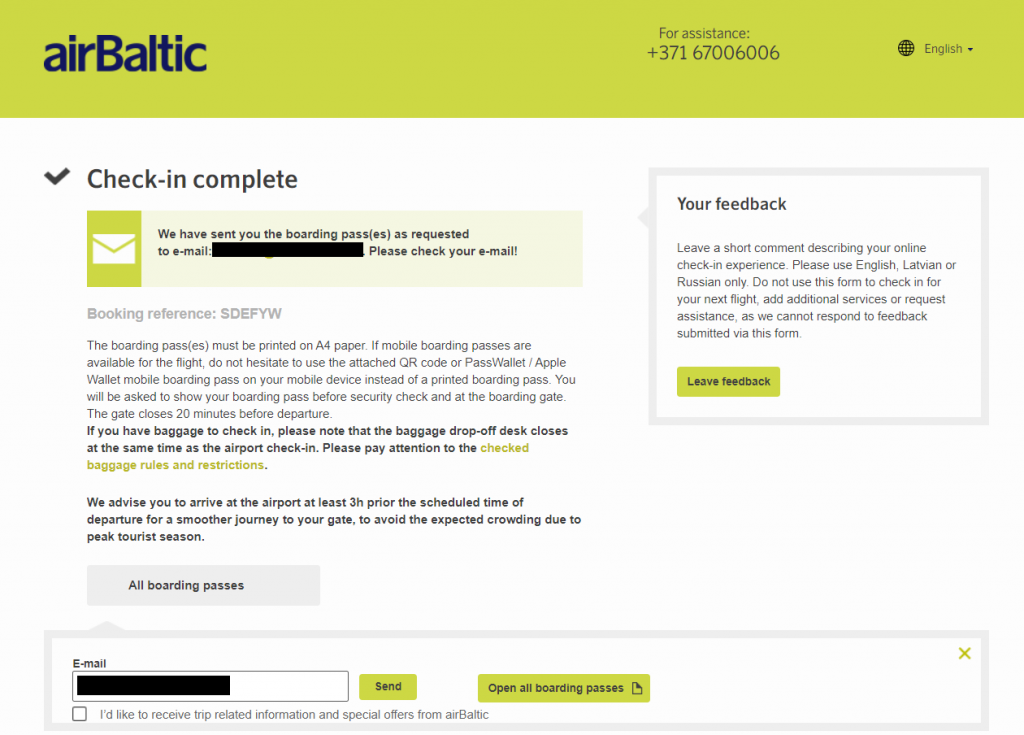 One thing I forgot to mention was the flight time of 8:05am. Ok not too bad… except they recommend you be at the airport at least 3 hours prior to this. So we had to be at the airport at 5:30am. Like really? It’s not like Vilnius is Charles De Gaulle airport. They probably tell you to be there so early because there was only 1 Air Baltic person checking people’s bags in for the flight. I wonder if this was so people deliberately missed their flight…

I found the staff at the airport seemed to only think there’s one way to do something and that way must be followed. They were very brisk staff and didn’t even say hello when you get to the ticket counter (or board the plane). When I said hello to them they totally ignored me. I know I don’t speak Latvian but everyone knows what hello means…

I was offered no water on the plane. I can’t remember if they had some available for purchase – they probably did for a ridiculous price. The plane was very small and cramped (one of those really loud propeller ones – definitely made use of my noise cancelling headphones). There was hardly any aircon and everyone squabbled over the very limited overhead locker space.

The seats were so close together my Dad’s knees hit the back of the seat in front (as bad as Air Canada if you’ve ever flown them you’ll know what I mean). There hardly any room underneath the seat to put your feet and a personal bag (with passports etc. – definitely not putting that into the overhead storage) and if you have winter jackets you’ll have to hold that on your lap the entire flight. The whole plane was stuffy due to the crappy aircon. Myself and everyone I was travelling with felt queasy the whole flight (which never happens) – I was so glad to finally get off the plane.

Long story short – I’m never flying Air Baltic again. I’ll change the entire itinerary if I have to! If I ever visit the Baltics again I’d rather a long bus ride to Warsaw and fly out of there. Or get the bus to Tallin and fly Finnaiir.

The best part about the Air Baltic flight? Arriving in Amsterdam! 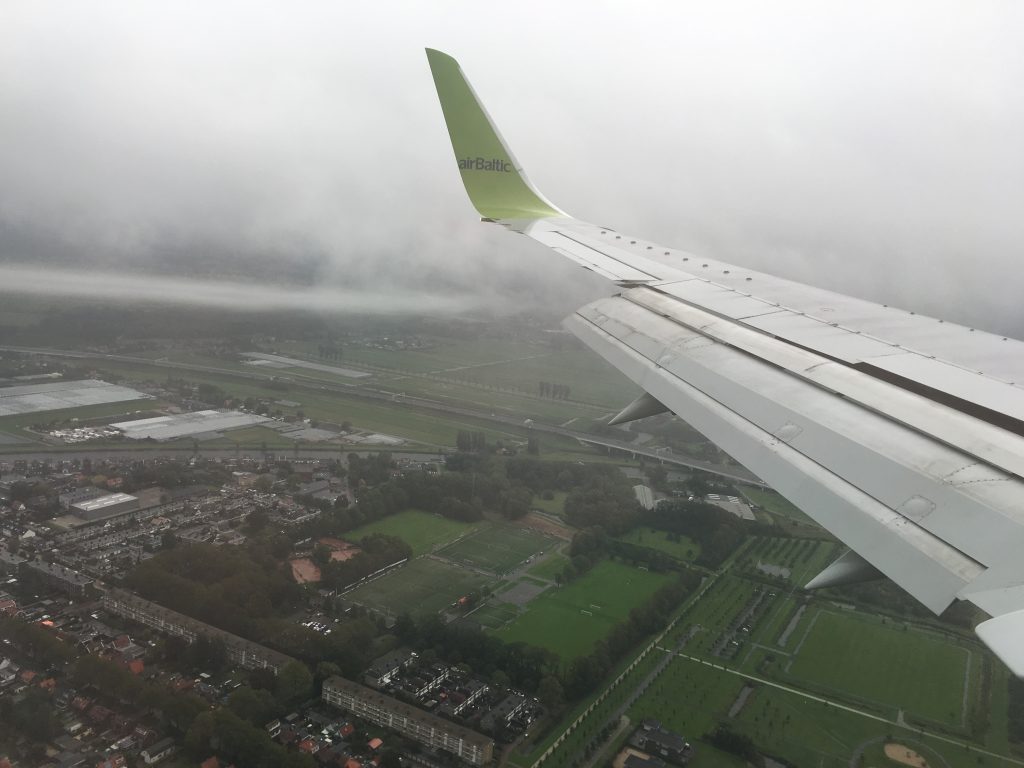 Some of the things in this post may seem minor, but most other airline staff will at least say hello to you, have appropriate air-conditioning on the plane etc. And just because it’s an airline with a monopoly doesn’t mean they should slap you with excessive bag fees that other airlines don’t charge.

The costs mentioned in this post were current as of 2019. Air Baltic fees & policies may have changed since then.