When visiting a country, I usually visited the capital and then do a day trip outside of the city. While visiting Tallinn, Estonia I chose to do a day trip to Lahemaa National Park. This national park has a boardwalk walking trail through a bog, plus it included a visit to an old Estonian fishing village and manor houses.

If I’m only doing a day trip I don’t bother hiring a car (too much hassle) so opted to join an organised day tour with a guide. I found a tour on Viator (cannot add the link to this post as it doesn’t appear to be on there anymore, although there are plenty of Lahemaa National Park day tours on Viator if you want to do a similar day trip).

Either because it was September (outside peak season), or because not many people visit Estonia, the tour was in a minivan with only 7 of us (which was a great group size!) plus the tour guide.

Time of my visit: End of September – the leaves were just starting to change.

First stop was Jagala Waterfall, Estonia’s biggest waterfall. There’s not much water as it was September / Autumn when I visited. It looked much higher when you walked down to the bottom! 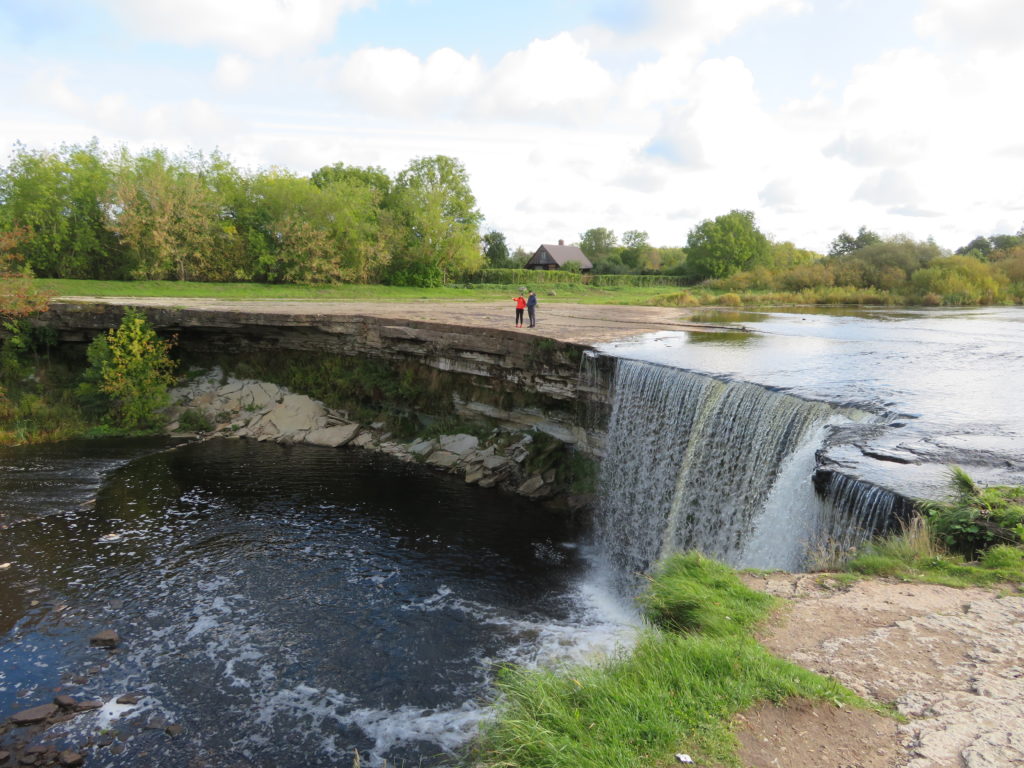 After that we made a quick stop at one of the 3 manor houses we’d see during the day where the guide told us a lot of history about Estonia… like way back from 1,300’s onwards. The guide was very passionate about the history (talked for 30 minutes about it!) but to be honest I couldn’t retell anything she said – I was too focused on how cold and windy it was and regretting not bringing my scarf and gloves. 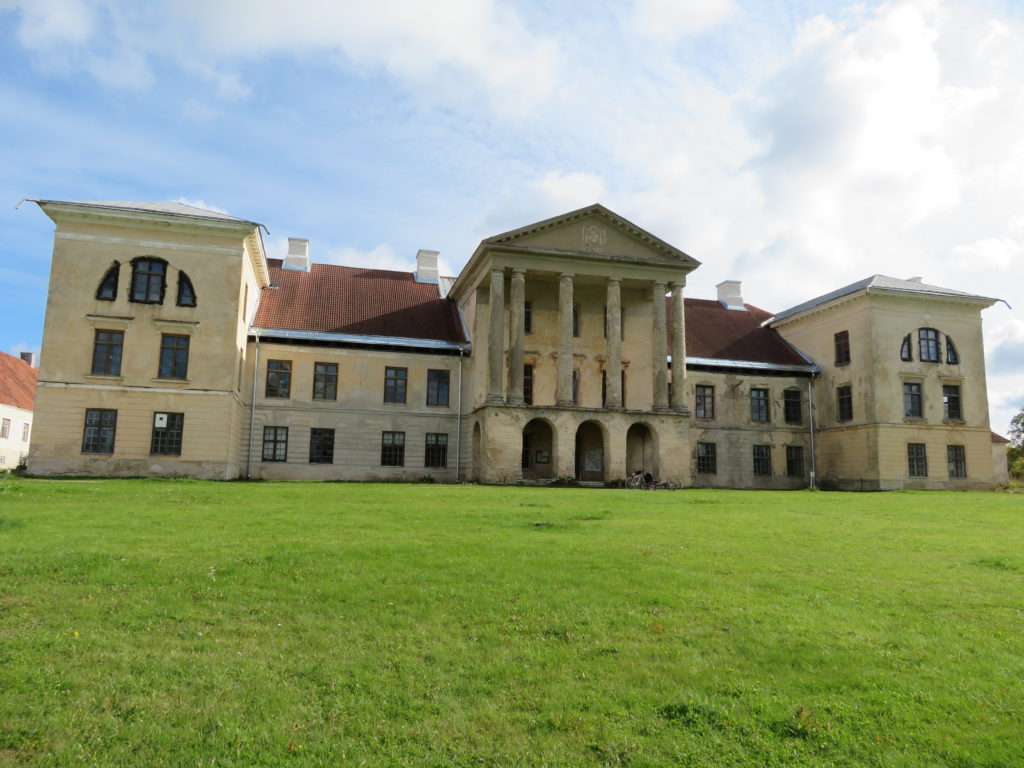 Lahemaa National Park is about a 45 minute drive from Tallinn and was the highlight of this day trip. There are many bogs you can walk but one of the most well known ones is the Viru Bog. 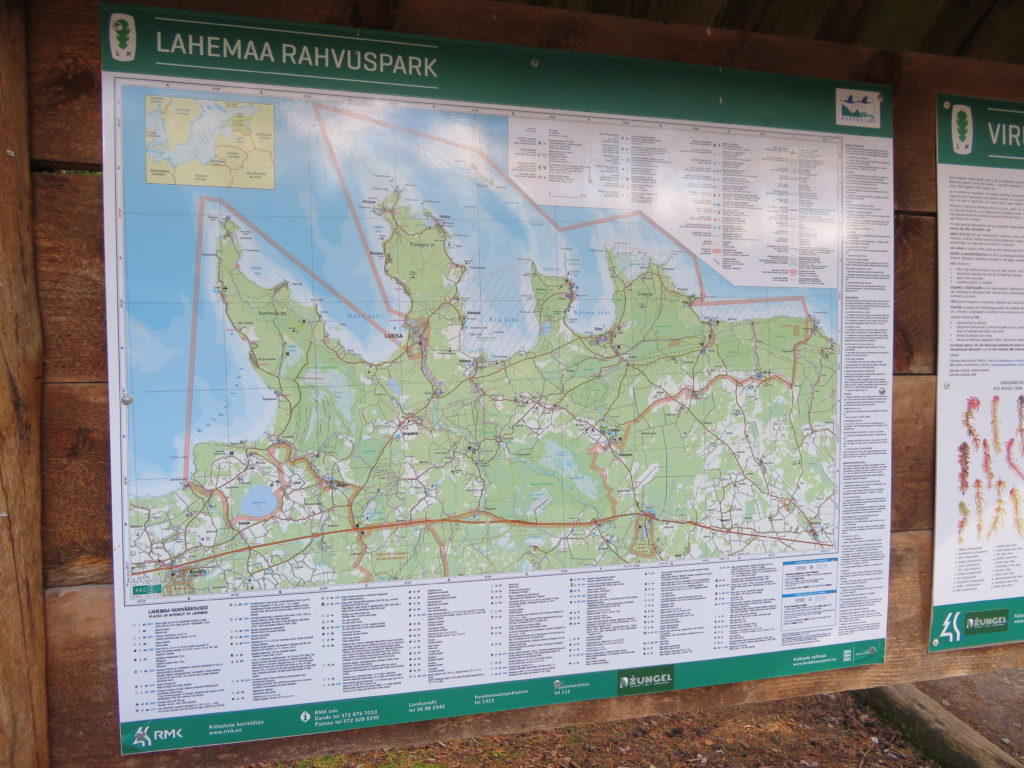 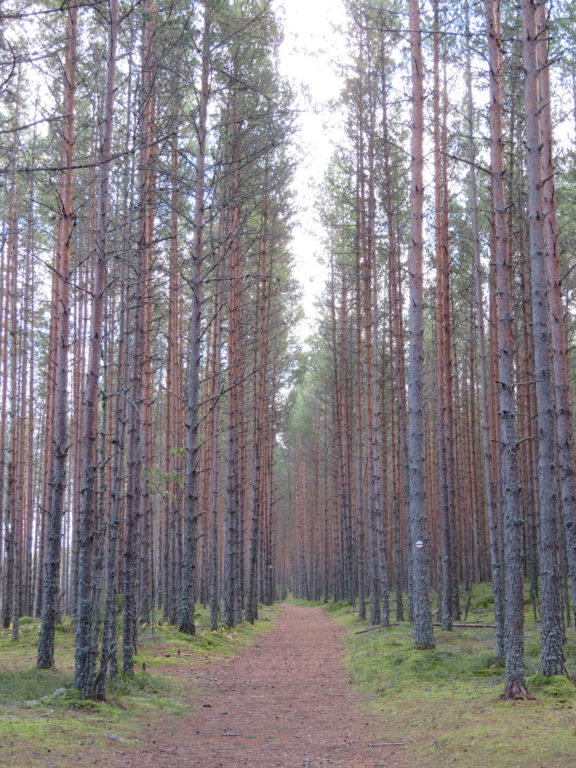 This continued until reaching the observation tower. 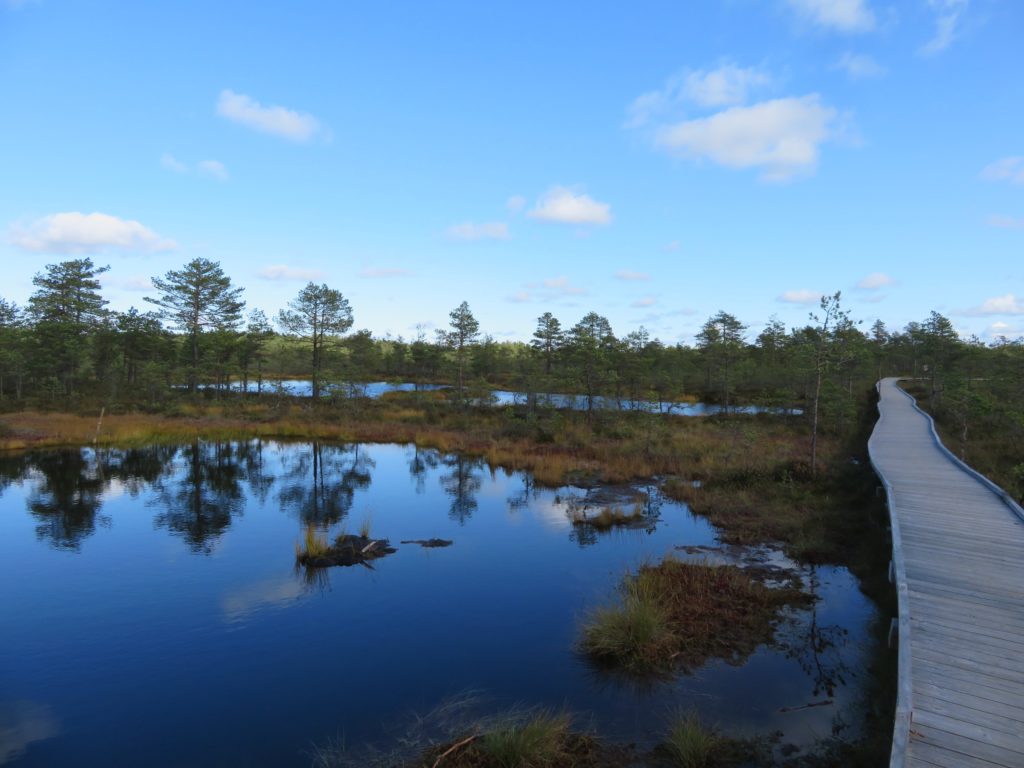 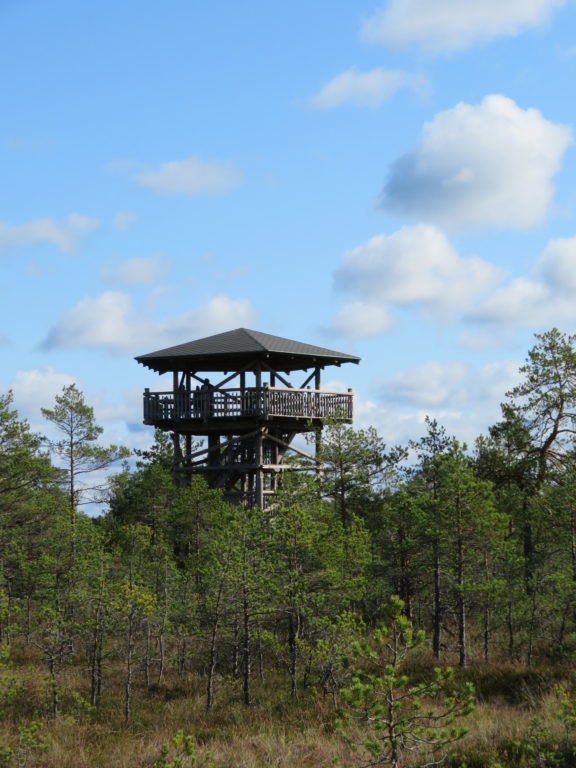 And this was the view from the top! 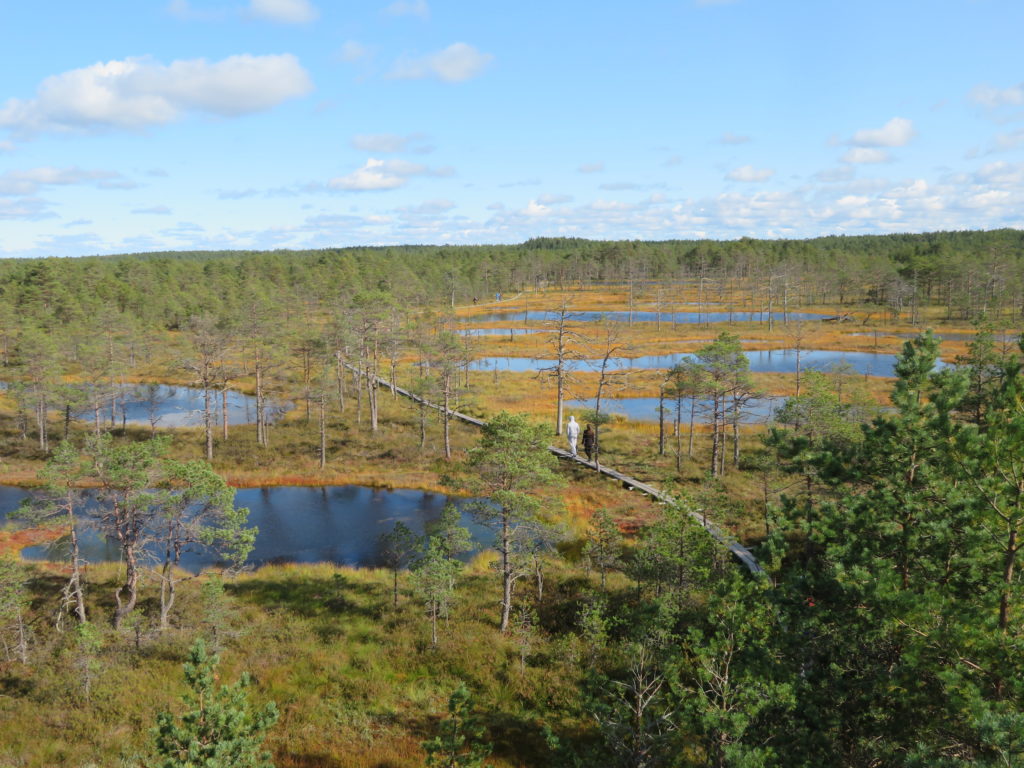 The walking trail is approx 3.5km long. The guide walked with us to the observation tower telling us things along the way, then sent us on our way (bit hard to get lost when the duck boards are just in a straight line) and then met us at the other end. It was boardwalk to the observation tower and then duck boards to the carpark on the other side where we met the guide. 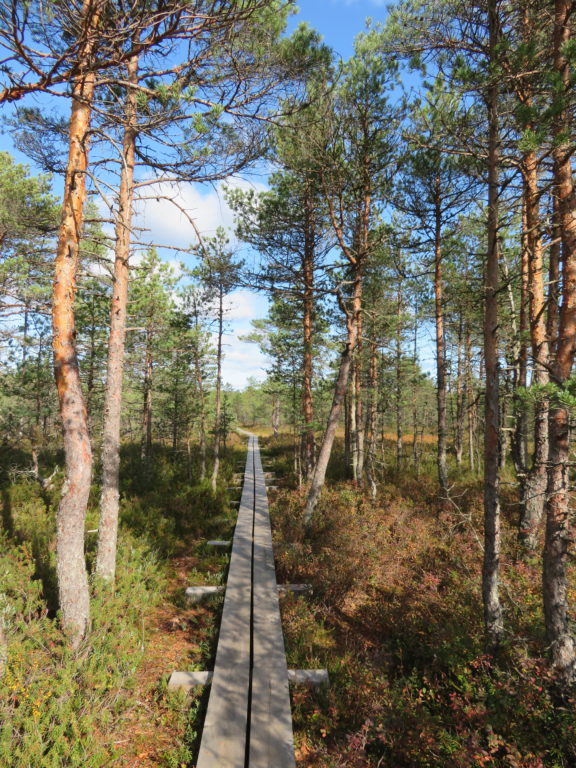 This is how you pass people on the bog 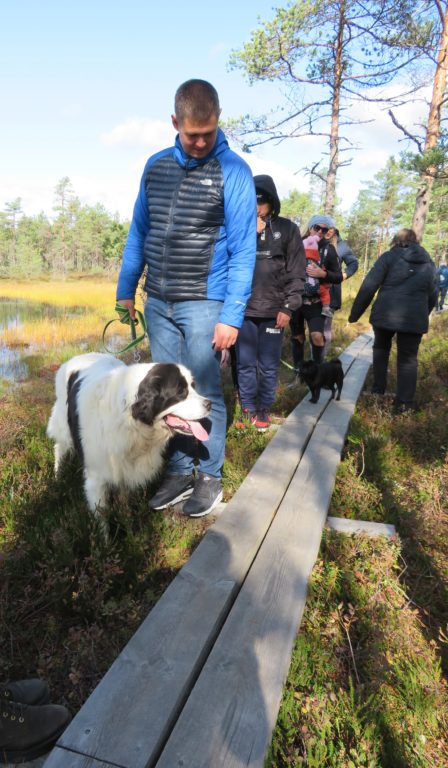 Some tourists were nice and stayed to the side well off the path, others took up the entire boardwalk barging into you even when you were already off the boardwalk on the side planks. Be careful not to slip off the little side wooden planks, I did once and my entire foot sunk into the mush. If my dad hadn’t grabbed me I’d have lost my balance entirely and fell into the swamp!

BTW, if you google Laheema national park in winter it looks completely different!

Berry & mushroom picking in this bog is apparently a popular routine weekend activity for Estonian’s. I peered into 1 child’s basket that was left on the boardwalk to see what they were collecting. The child quickly came running back and promptly snatched up the giant mushroom and clutched it to their chest while giving me the evil eye! The guide told us most kids learn which mushrooms are editable or poisonous and told us which berries you could eat (and had no hesitations grabbing a few off a branch when I told her I didn’t believe they were edible!)

After that is was onto lunch. Something to note: Estonian’s love their rye bread (really dense, chewy brand that in, my opinion, tastes horrible!) Breakfast, lunch and dinner, it’ll be there. They even make their garlic bread with it!

The lunch place we went to was called Palmse kõrts – it was only a few hundred metres up the road from Palmse manor. The day tour I chose didn’t include time to actually go inside the manor, just a quick photo from the outside (which I was fine with but just note if you want to actually go inside you may need to pick another day tour that solely focuses on the Estonian Manor houses). 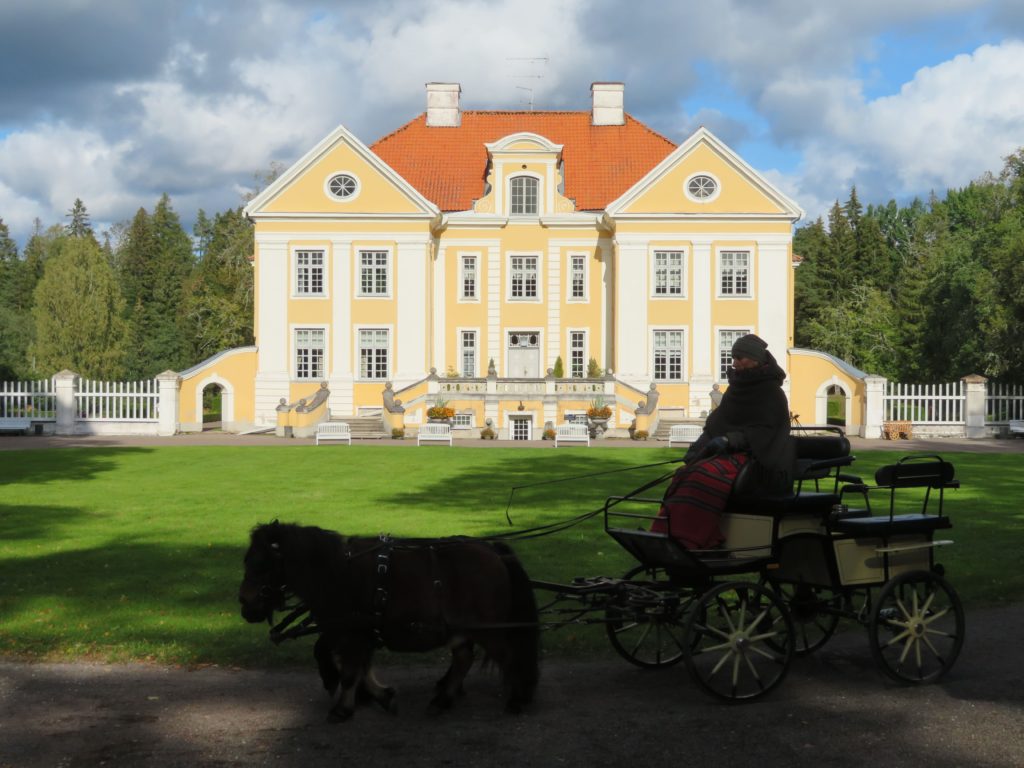 The tour included stops at 3 manor houses, my favorite was Sagadi Manor. If you wanted to go inside you had to pay (costs 5 euro). I opted to just walk around the gardens. You could peer in the back windows at the main hall with chandeliers anyway. 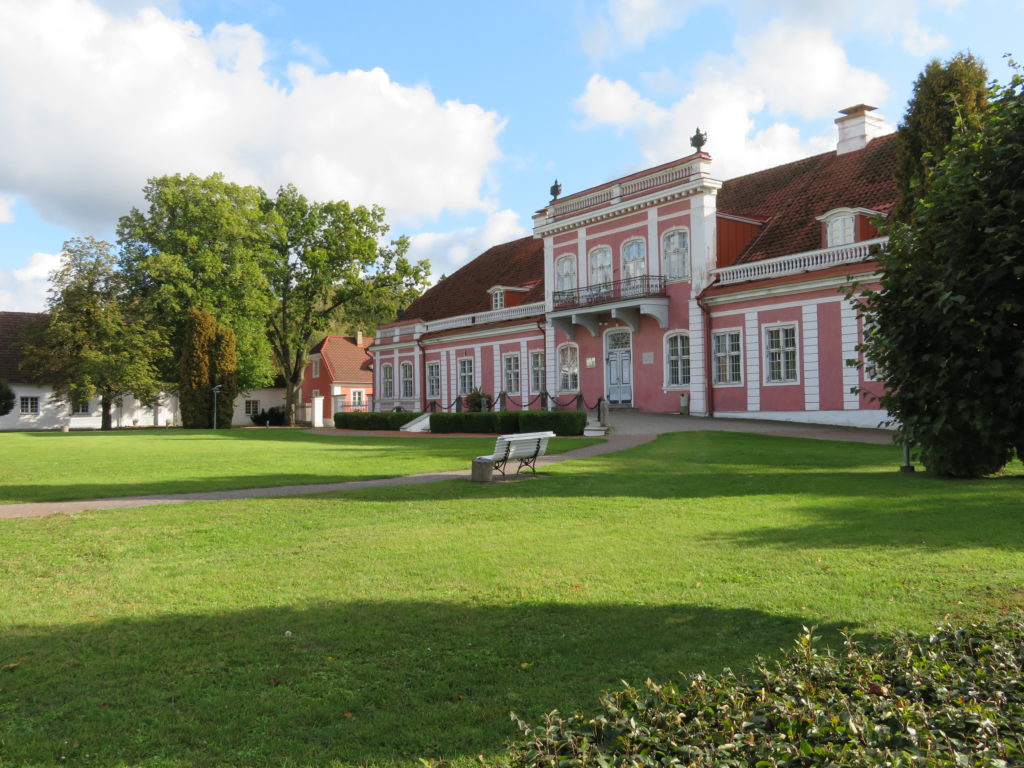 The manor house had a sauna of course! 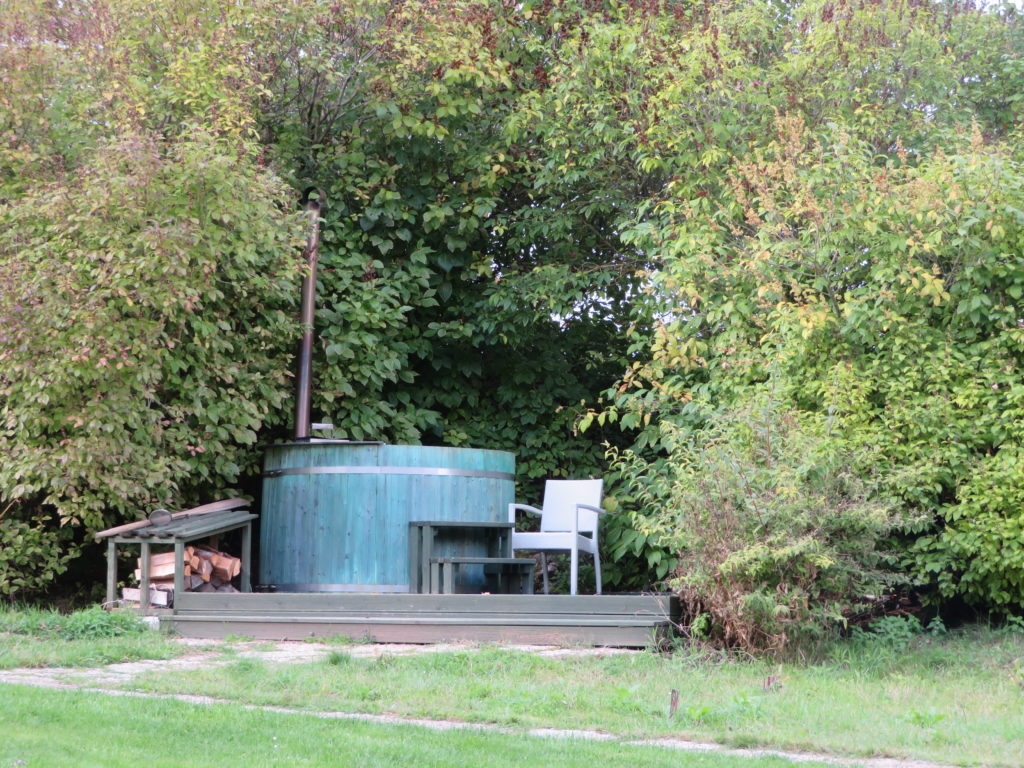 Last stop of the day was a local fishing village along the Estonian coast.

This little village dates back 500 years! The guide told us interesting facts about how the houses were setup (in the winter – one room for the animals, one for the humans). There’s an old well that you can still use. There’s also a swing which is apparently a big sport in Estonia called Kiiking. 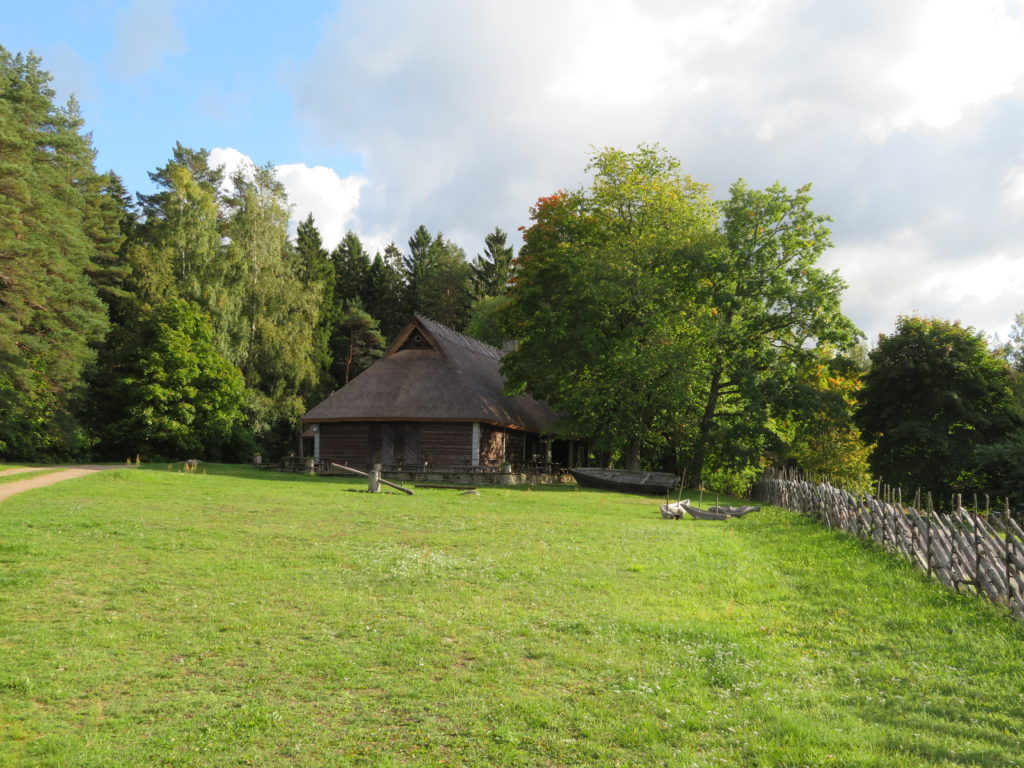 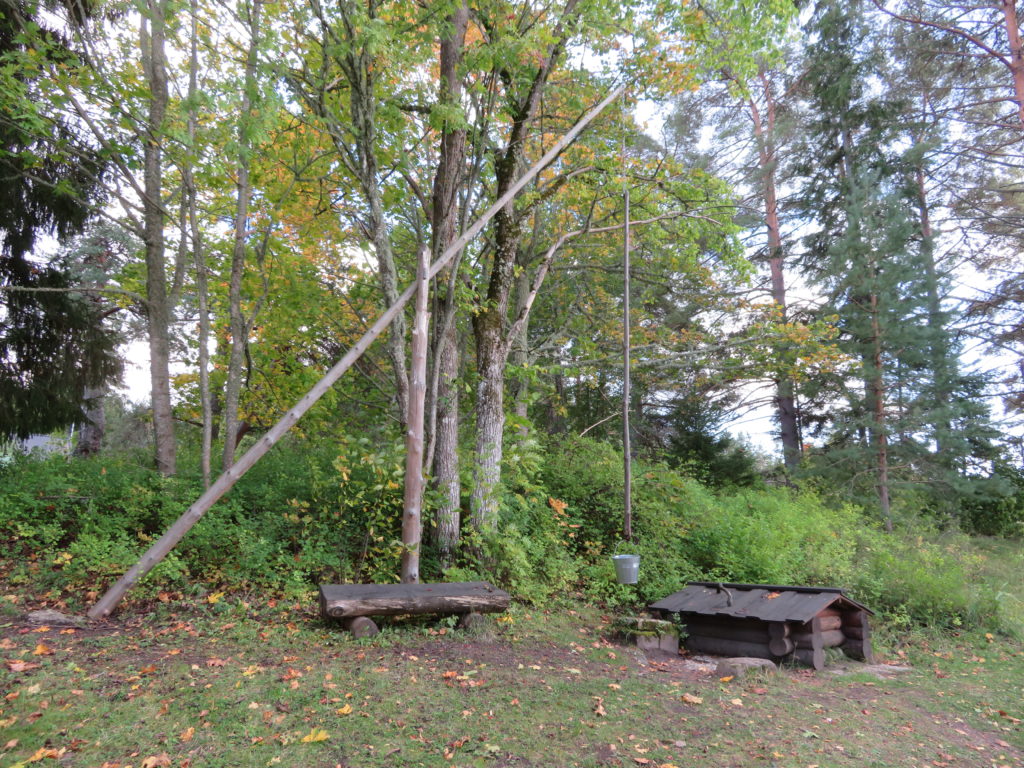 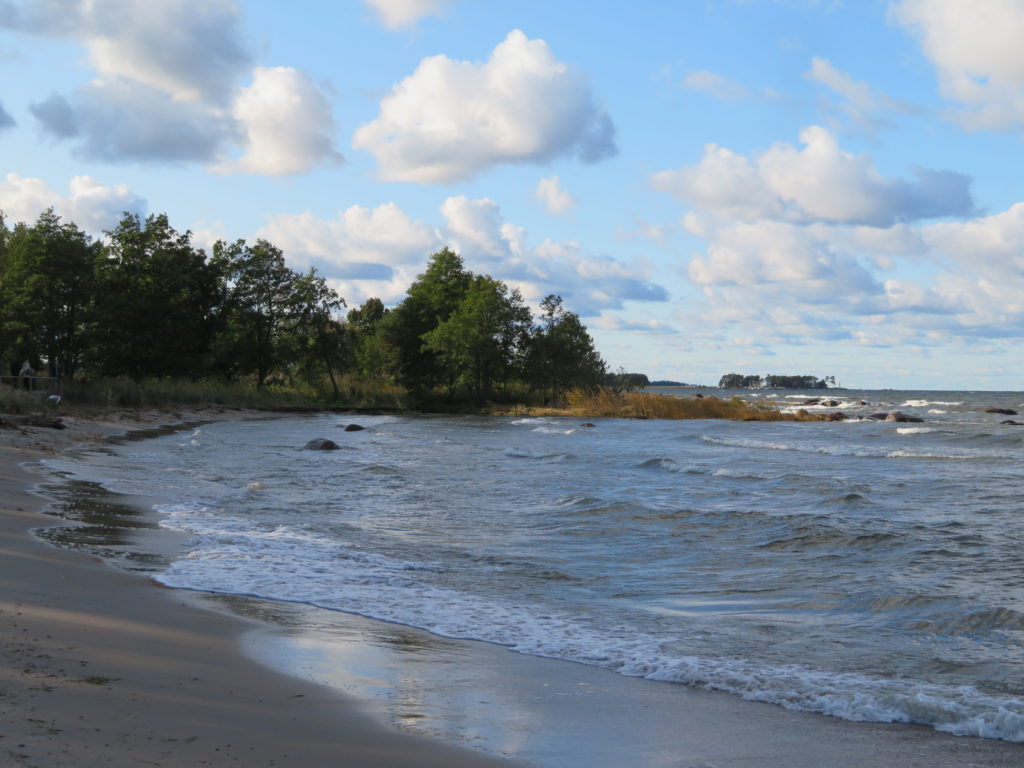 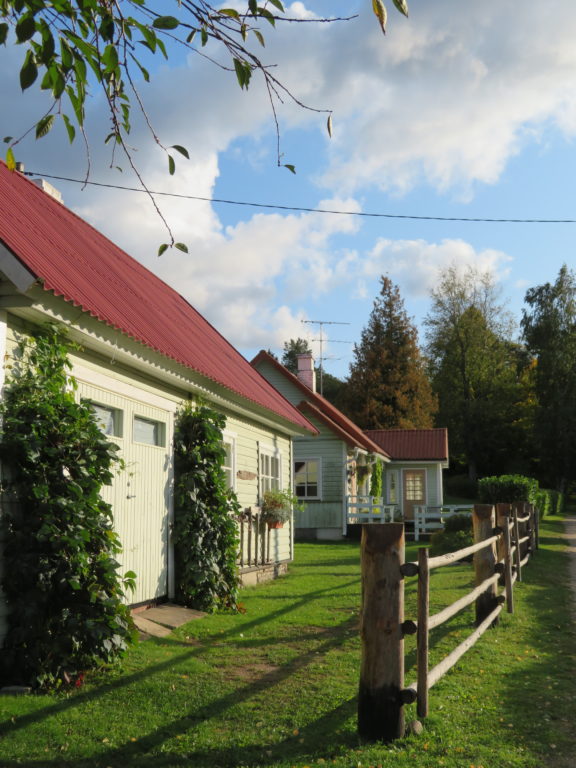 A short walk along alongside adorable cabin houses and the water and you’ll reach a small beach (there was even a suspension bridge).

Some of my favorite photos of the day! 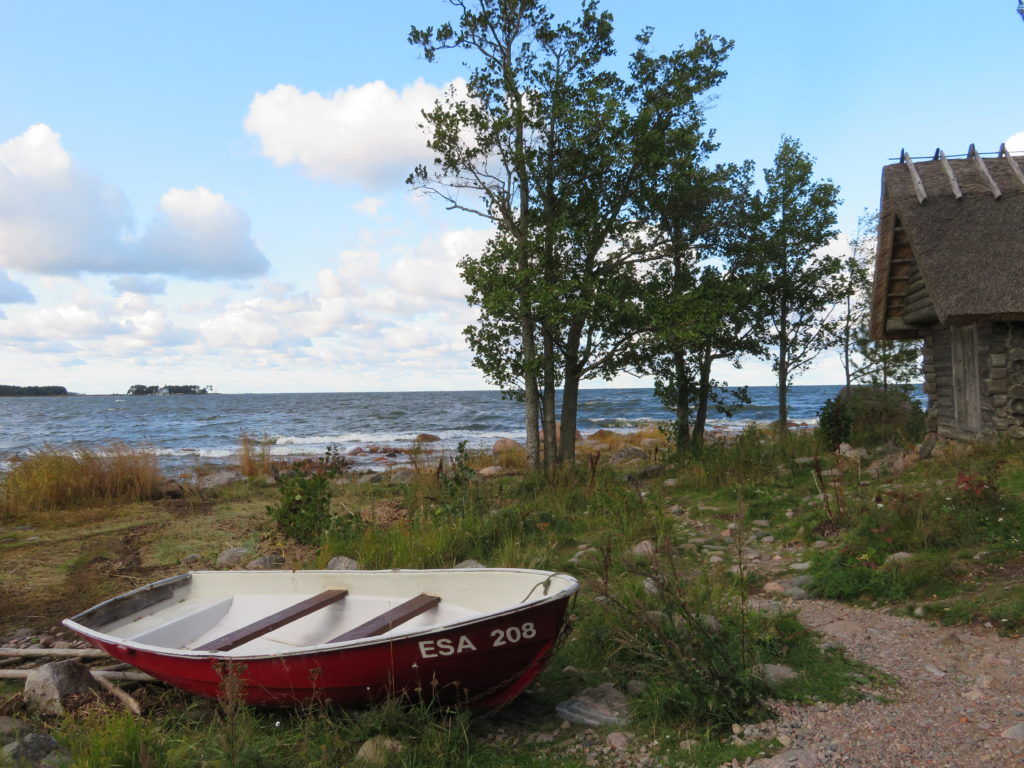 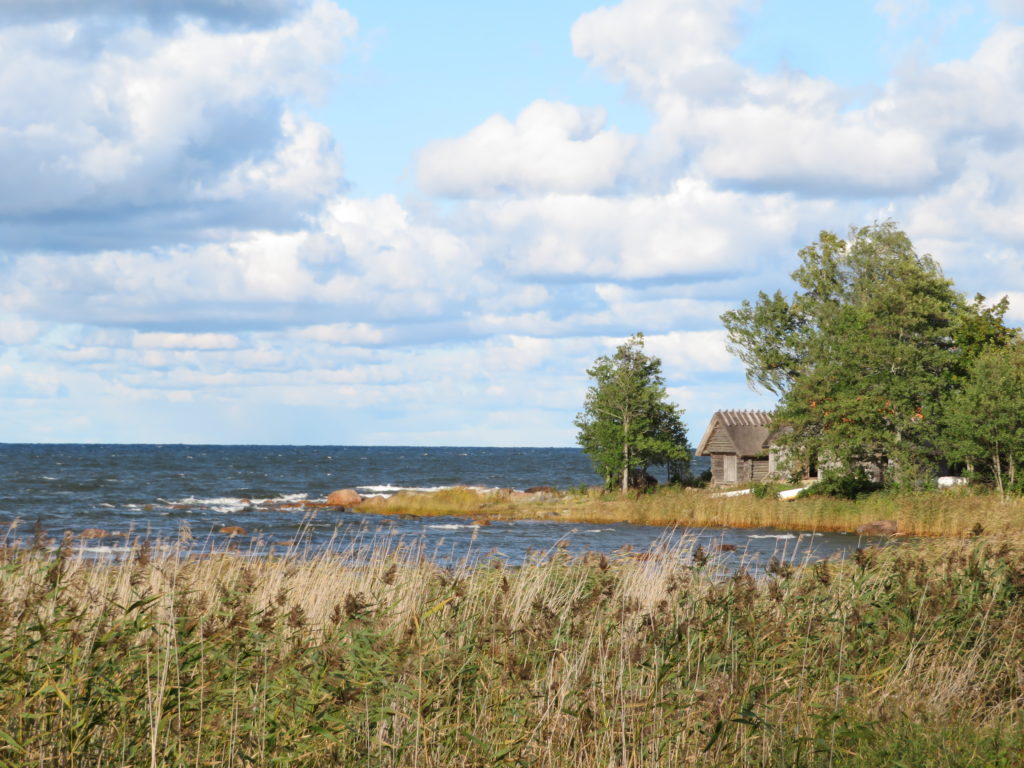 Do I recommend this day tour?

Yes – I really like this day tour! it had a good variety of Estonian manor houses, bit of nature with the bog walking trail and the waterfall, Estonian food at the restaurant the guide took us to, plenty of nice fields and forests when driving between locations and the quick visit to the coast was good too. The stops on this tour and the timings for each location were just right.

The guide was efficient and had clearly done this tour many times – knew to give everyone the menu before we did the walking trail so she could ring ahead so we weren’t waiting for food when we arrived at the restaurant, was there at the end of the trail to pick us up in the car, knew where to park etc. I’m glad I did this trip as a group tour rather than hiring a car and going on my own. I doubt I’d have been able to fit everything in and would’ve probably gotten lost on all the country roads.

It was a full day tour departing 10am from the Tallinn Tourist Information Centre and arriving back in Tallinn around 6pm (so 8 hr day trip). I booked the tour on Viator. From memory I think it was around $100 AUD per person which I thought was a fair price.