Tallinn, Estonia is a city that’s made it near the top of my list of favorite European fairytale cities – hard to believe it’s in one of Europe’s least visited countries!

Time of my visit: September (autumn)

Must see and do

The main photo spots. I made this map using Google Maps (see my tutorial on how to make one in this post). 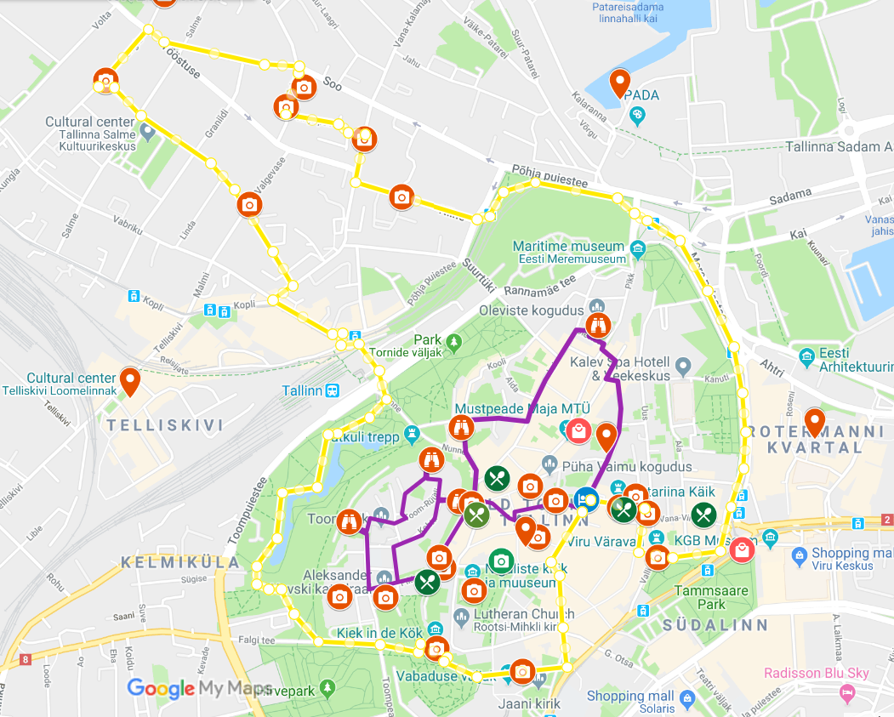 The old town is enclosed in the city walls with an abundance of hidden alleyways to explore. Despite being part of the former Soviet Union it’s not a city that’s filled with stark grey concrete block buildings, it’s really well preserved medieval town. Tallinn is the cutest medieval city I’ve visited to date!

There are quite a few good viewpoints in Tallinn (see this post), my favorite was Kohtuotsa viewing platform: 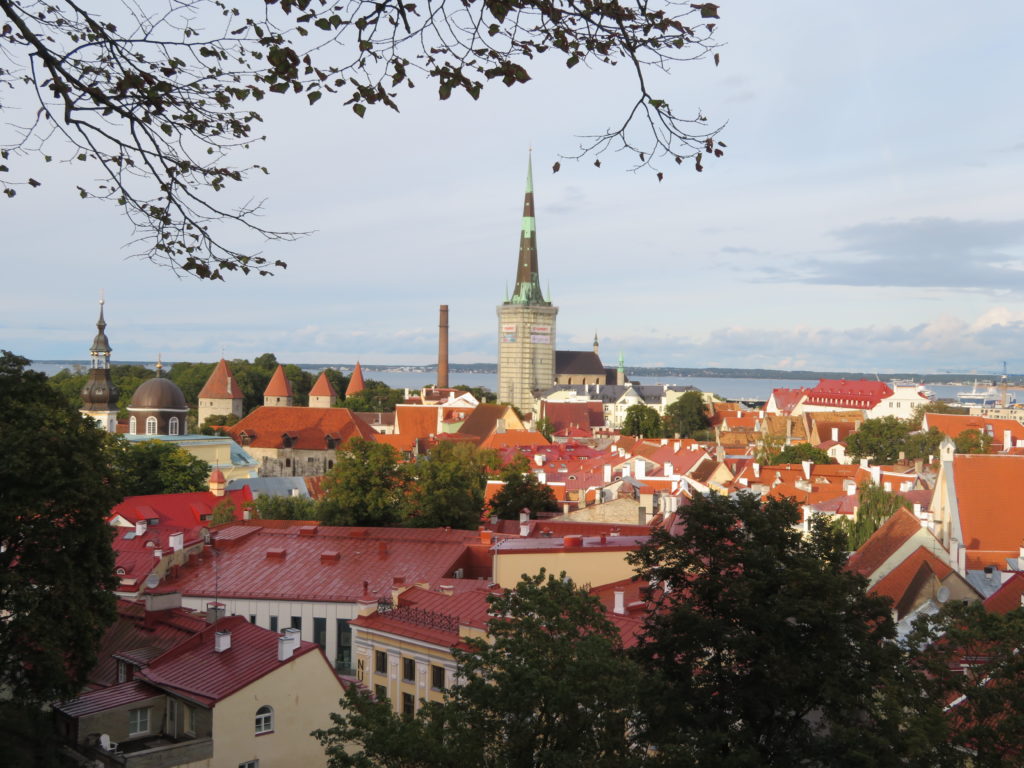 Visiting was like stepping back in time, I definitely need to come back in winter when they put up a giant Christmas tree in the square and all those red roofs are covered in snow. 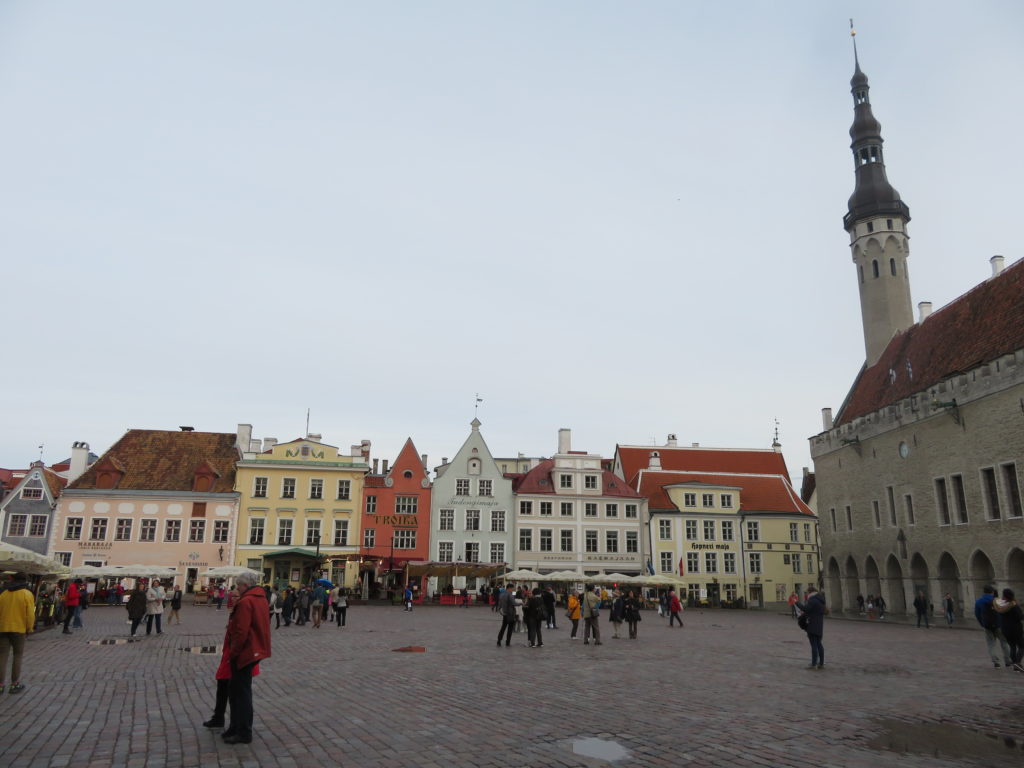 Balti Jaama Turg Market just outside the old city walls had some nice food stalls… but not much else. Good for wandering through in about 15 minutes if you’re in that part of town (I went there after walking around Kalamaja neighbourhood). 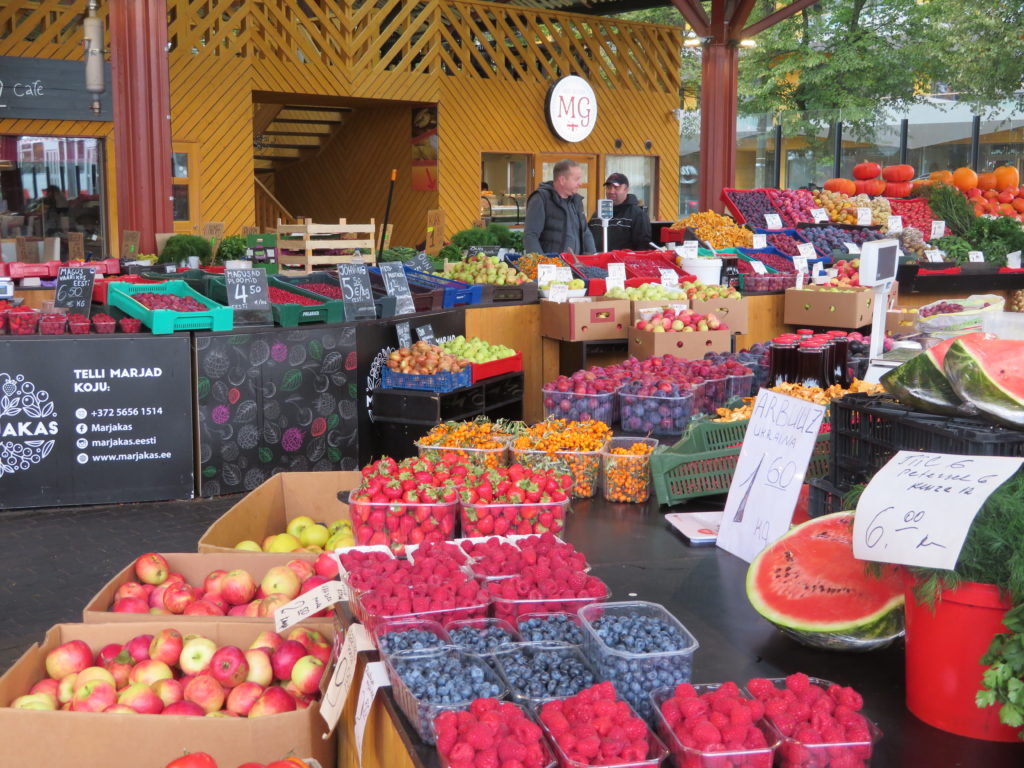 Not to be missed is the Kiek in de Kök Museum and the Bastion Passages (access both from the same location: Komandandi tee 2, 10130 Tallinn, Estonia). Allow around 2hrs for your visit if you do both.

The Bastion Passages are underground tunnels that go a deceivingly long way. They were used to hide in during the war – the tunnels contain numerous TV screens with videos on Tallinn’s history and some setups of how the passages have been used in the past. 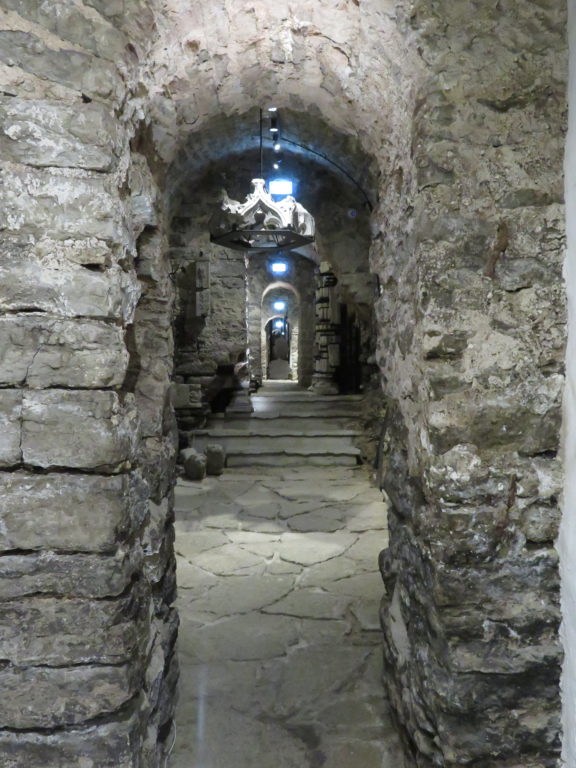 For what I think is the best view of Tallinn, visit the Kiek in de Kök Museum where you can walk along the old walls and go up and down the towers looking at the exhibits (and the view). There was some intresting history in the towers – I didn’t realise Tallinn was under Denmark’s rule for a long time! 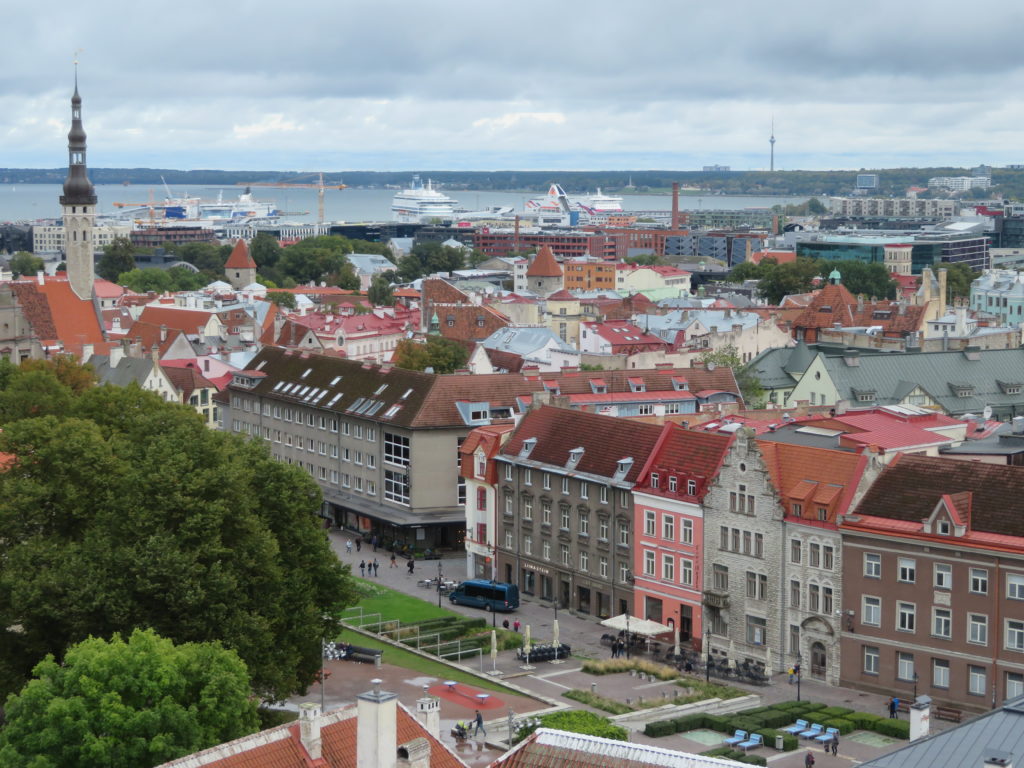 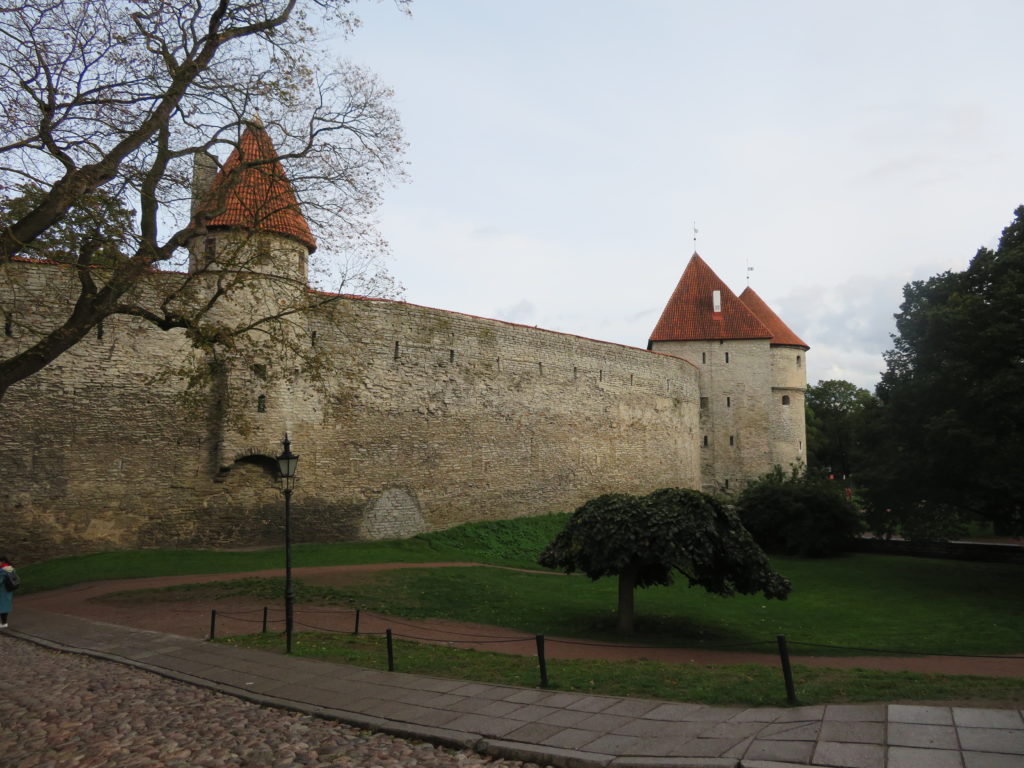 Most people arrive via ferry (from Helsinki) or the Lux Express Bus from another Baltic country. Tallinn Airport or Lennart Meri Tallinn Airport is only 15 min drive from the old town. I arrived via plane from Helsinki (as I first flew Rovaniemi to Helsinki, then Helsinki to Tallinn on a connecting flight on the same day).

The best way to get around the old town is on foot.

If you’re venturing outside the city walls (e.g. going to Kadriog Museum), it’s easy to take the local tram or the bus. I couldn’t find a ticket vending machine so hopped on the tram and went to buy a ticket from the driver… who didn’t even care. No one was checking tickets, no one was really tapping a card on or off – it was like everyone was riding around for free. Or maybe I just timed a day where they didn’t care to check. There are tram stops all around the old town walls.

One of the alleyways in the old town 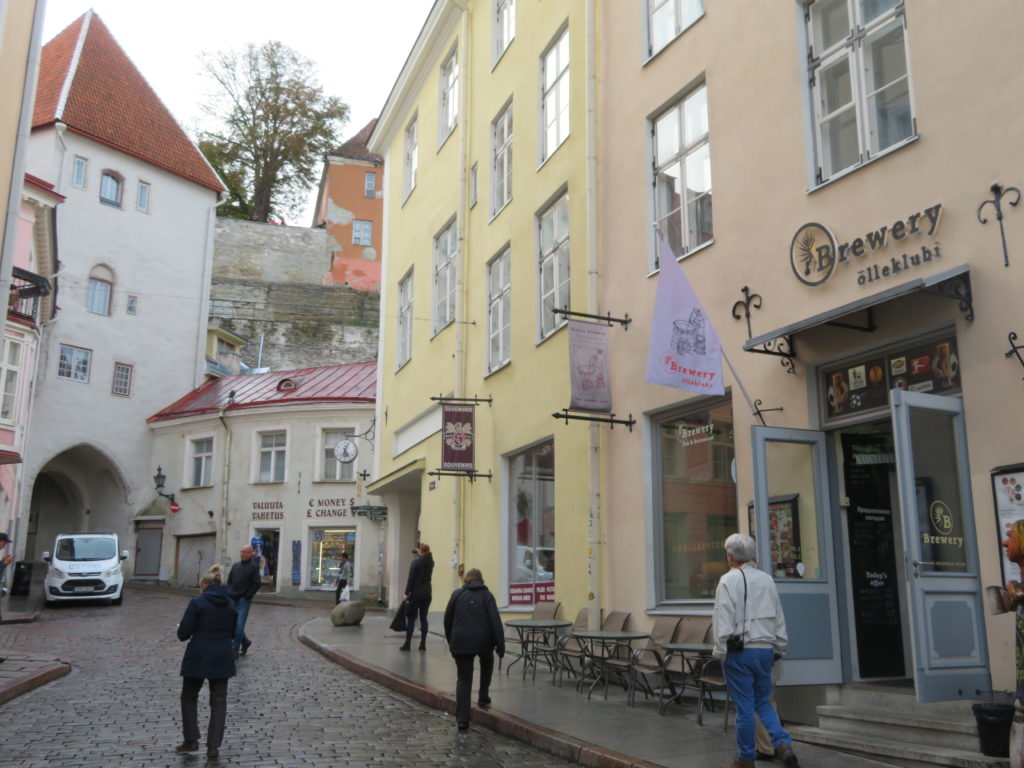 Most people visit Tallinn for only 1 day off a cruise ship or the boat from Helsinki. The town was so much quieter at night than during the day. But 1 day is not enough! If you’re going to visit Tallinn you’ve got to stay in the old town. All the old buildings, tons of hidden alleyways and the main square lit up at night is not to be missed.

I stayed at Hotel Telegraph which had a great location close to the main square and plenty of restaurants. Had I not been in a big group with my family (we had 4 people) I probably would’ve stayed somewhere cheaper. It’s a nice hotel and was in a great location. Even though it’s 5 star the price was comparable to what you’d pay for a 3 or 4 star hotel in more touristy European countries. I wouldn’t worry too much about the hotel’s location within the old walls, everything is within walking distance. I walked around at night and felt totally safe (felt safe during the day too!).

There are a few more well known chain hotels outside the old town walls (Hilton, Radisson Blu etc.) but they’re a bit far out of town and just look like any old hotel. If there’s one city you’re going to splurge to stay in the city centre, make it Tallinn. 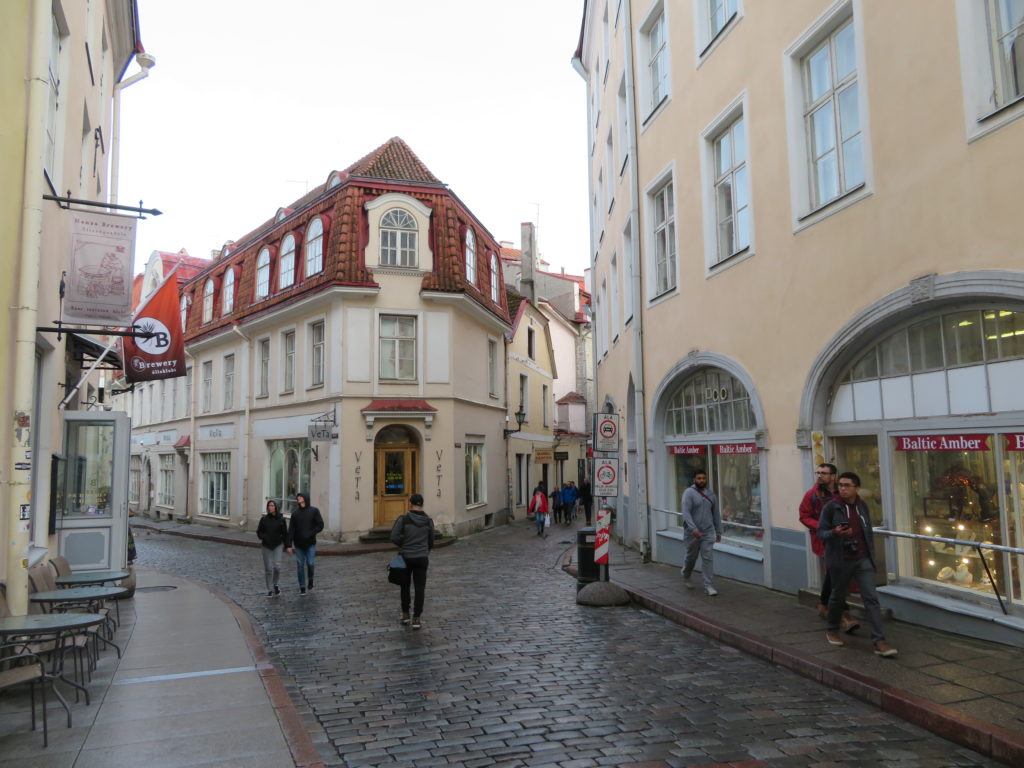 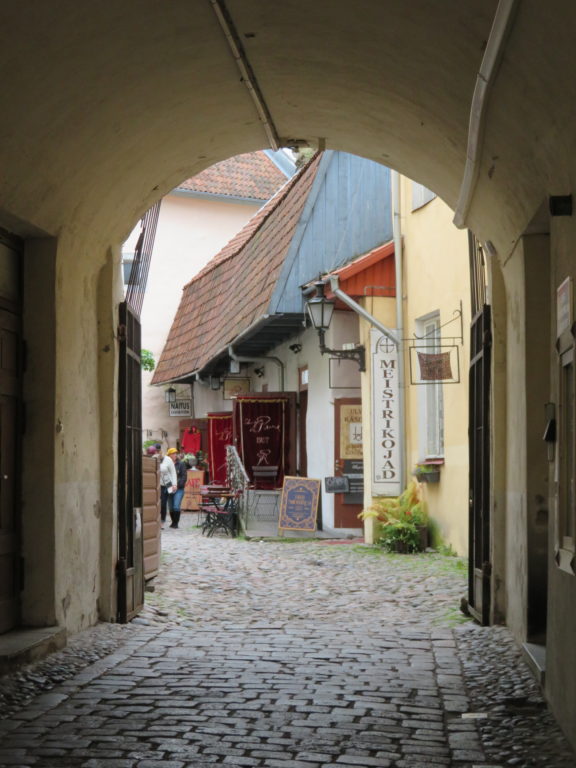 Not sure what was up with this guy. Just casually opened this little wooden door built into the old stone walls. Does the city lease these holes in the wall to residents living in the old town to store their junk as they don’t have garages? 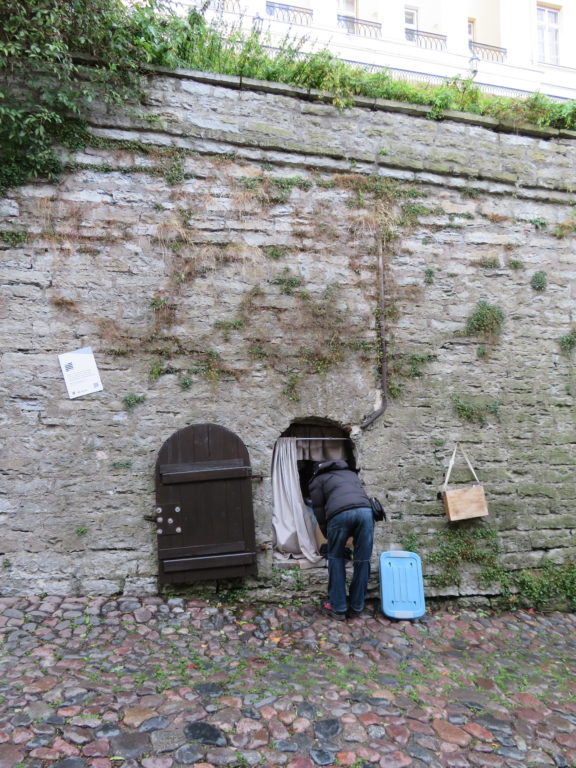 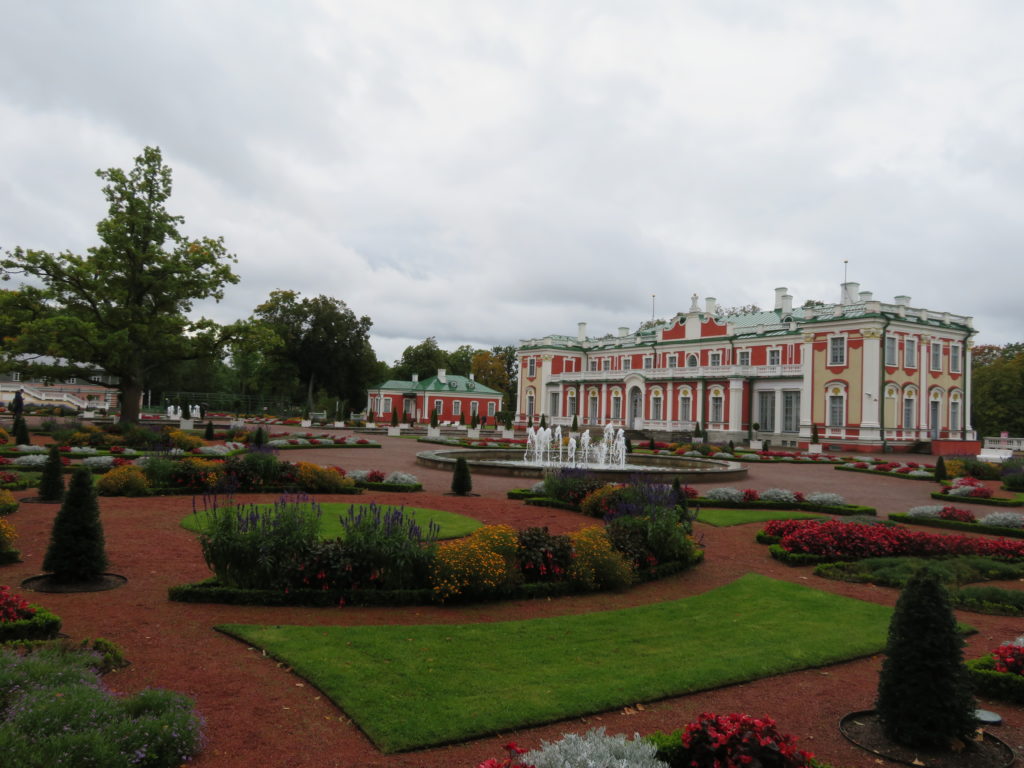 If you Google Kadriog Park in autumn (or Kadriog Palace in autumn) you’ll see a photo taken in the same spot I stood but the trees are bright orange – that’s what I was hoping to see! Sadly late September was a bit too early for autumn colors. 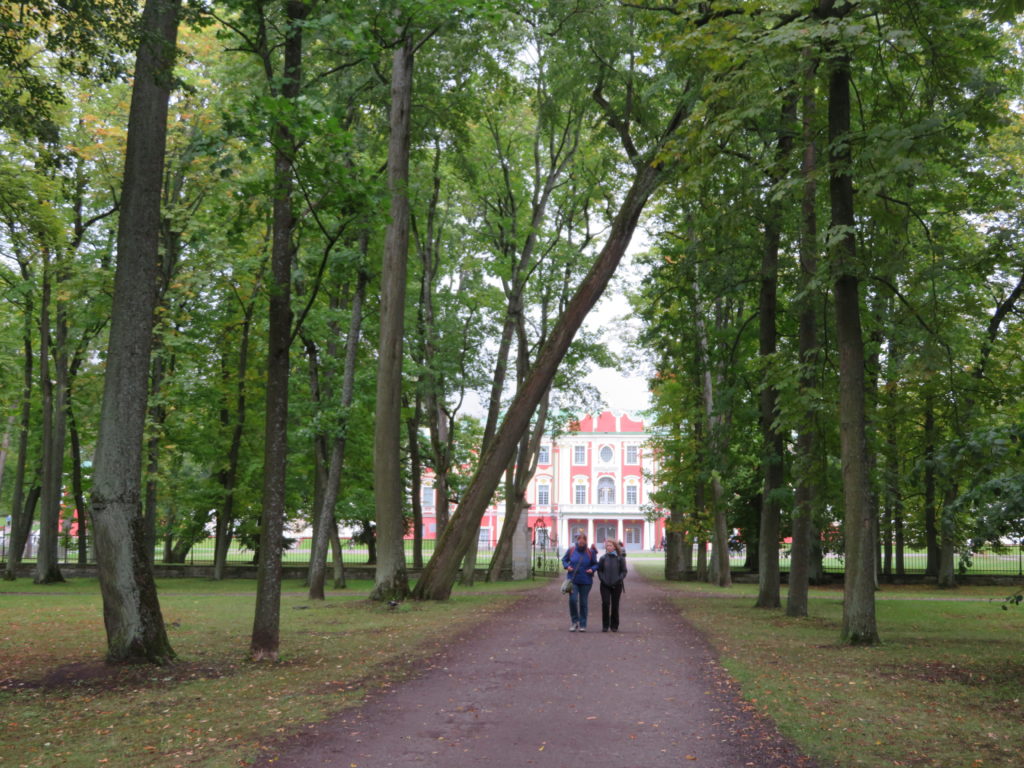 Kalamaja neighbourhood with the cutest houses 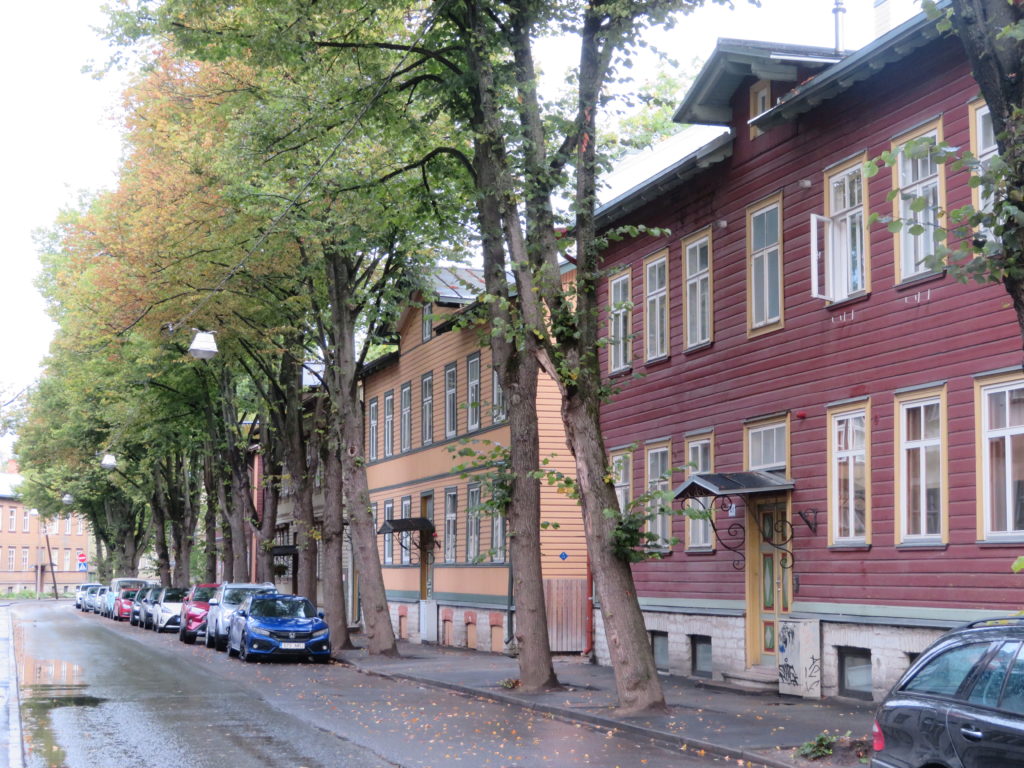 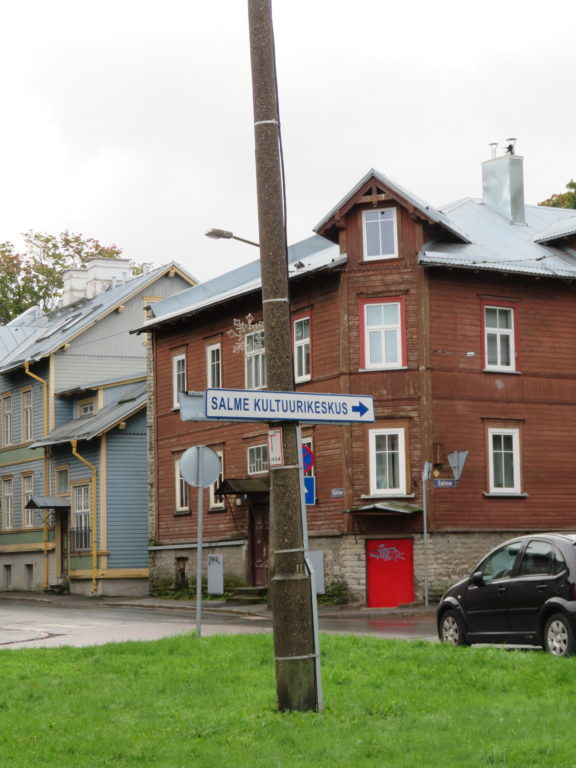 How long do you need?

I stayed in Tallinn for 2 days and did a 1 day trip to Lahemaa National Park. This was the perfect amount of time – not too short but not rushed either. 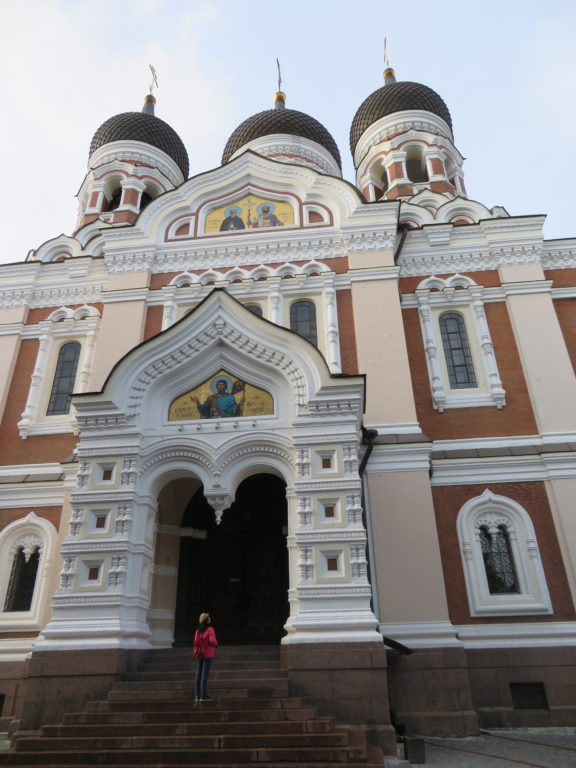 Whenever I visit a city I try to spend at least 1 day out of the city.

I chose to do a day trip to Lahemaa National Park which involved walking through a Bog (wetlands) a small fishing village on the edge of the coast and driving through lots of forests. I really liked this day trip and definitely recommend! Since not many people visit Tallinn, there were only 8 of us on the tour in a mini-van (a nice change from big tour buses).

Read more: Best of Helsinki in One Day 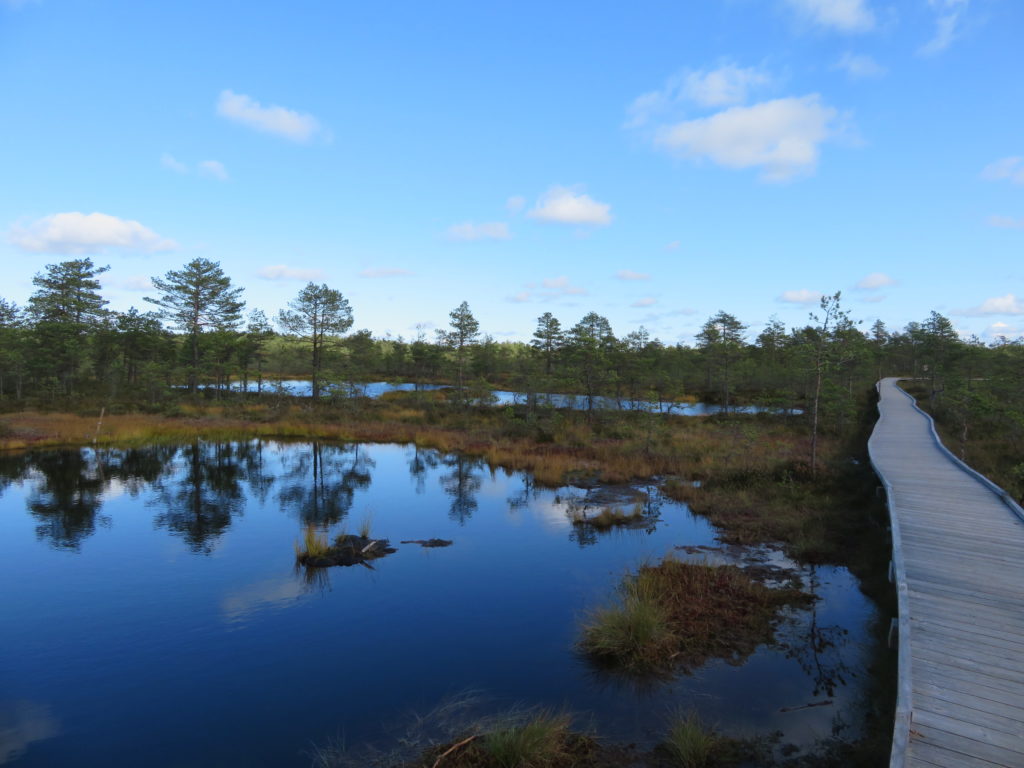 Where to Eat in Tallinn

The Baltics have great food for great prices. Variety of meat and lots of veggies and best of all – mashed potato. Tallinn had an abundance of medieval themed restaurants. My favorite food places were:

There are plenty of others hidden in the side streets too!

If you’re heading to the Baltics keep this in mind: garlic bread isn’t like ‘normal’ garlic bread. They have really dark and dense rye bread with a very strong flavour, then cook it to a crisp with oil then add literal chunks of garlic on top… I was not a fan.

I found some of the best chocolate I’ve ever had in my entire life. Kalev brand. I stumbled across this at Rimi supermarket. A 100g block cost only 1 Euro so naturally I wasn’t expecting much. But OMG that chocolate was so creamy I went back and bought 5 more blocks. And wished I’d bought more as sadly I never saw it again in the other Baltic countries or elsewhere in Europe 🙁 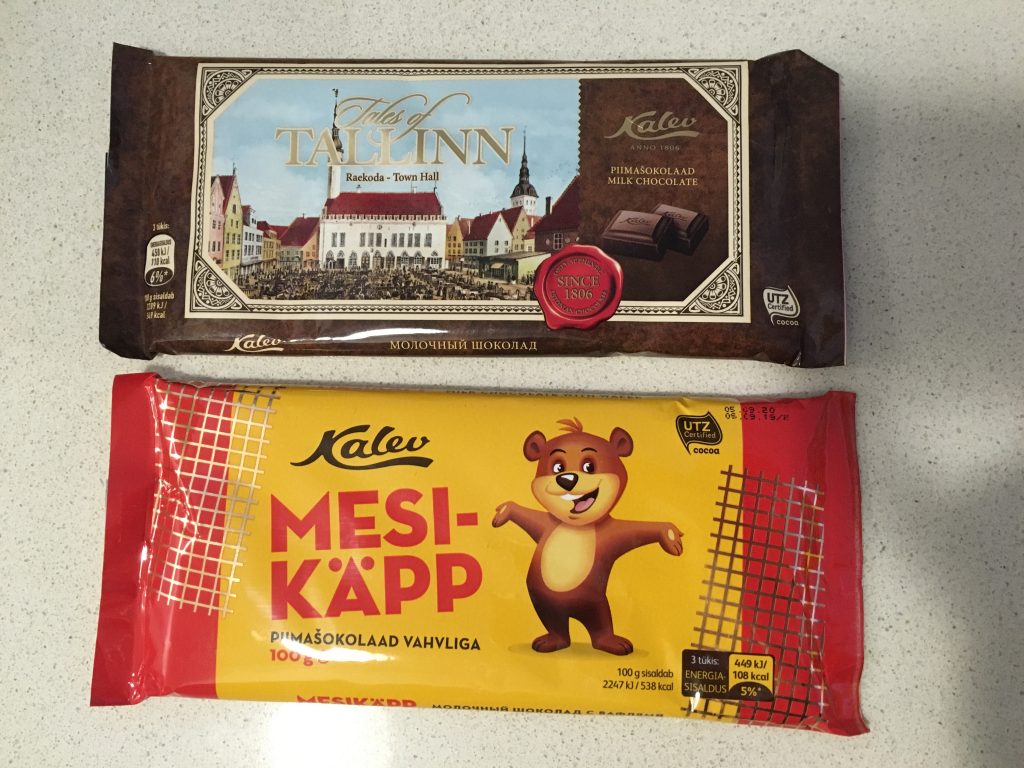