The Tombow brush pens (affiliate link) are ideal for adding a little creative flair to your bullet journal. While experimenting using a bullet journal for the month, one of the first things I did was pen testing. Since most of the bullet journals I purchased (8 to be precise, all in the name of research of course), had ghosting and pen bleed through when pen testing, I wanted to see if there really is a bullet journal that won’t show pen bleed. 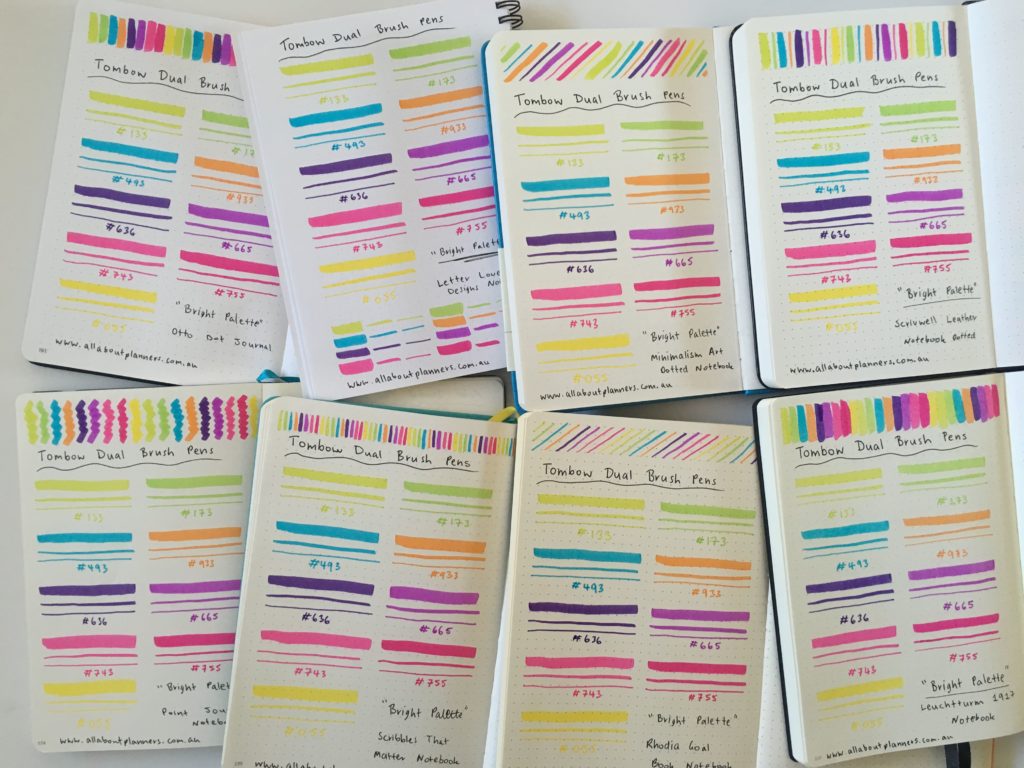 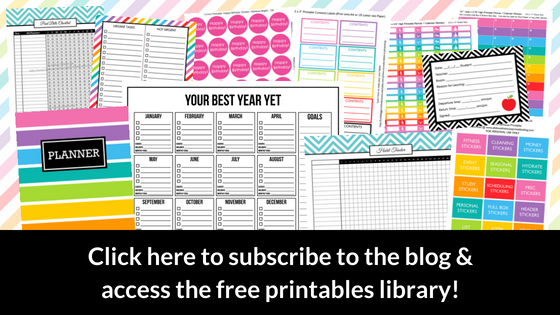 You might notice the Moleskin notebook is not on the list. The reason is because I have the Moleskine planner. I know they do a dot grid notebook that could be used for bullet journaling but since the pens I tested in this notebook have bad ghosting (and I’m assuming the pages will be the same quality for all Moleskine notebooks), I haven’t bothered purchasing a bullet journal notebook.

I originally purchased the Tombow Brush Pens because I wanted to learn how to do brush lettering. I stopped practising it for a while and by the time I got back into it, the muscle memory was gone and I was too lazy to try and re-learn how to brush letter (plus I don’t have time). Rather than letting brush pens go to waste, I started to think of some of the ways I could use them for planner decorating – titles, dividing up the page, borders and just generally adding color to the page without using stickers or washi tape. Which then led me on the seemingly never-ending quest to find a notebook with decent paper where the ink wouldn’t show through! 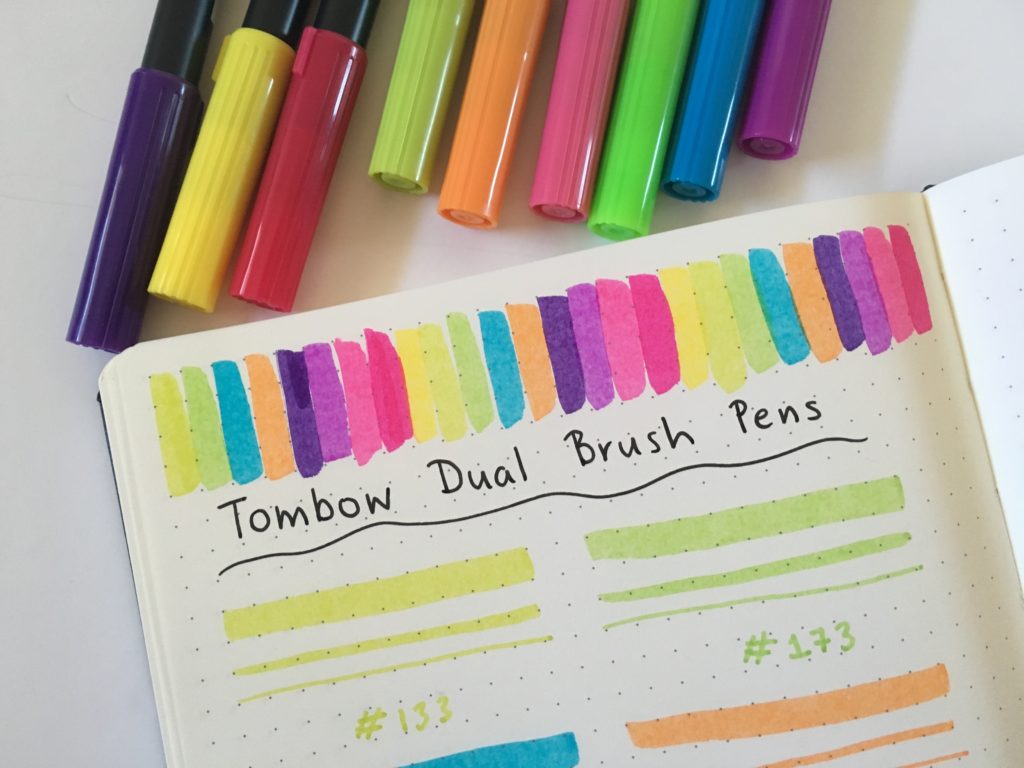 Note: using paper in normal notepads (not special paper like the Rhodia notepads) can blunt the tips of your brush pens. So if you want to continue using them for brush lettering you might want to buy some cheap brush pens for your bullet journal.

Brush pens make really good highlighters, or draw a swatch then write the title over the top for list making. Because of the brush tip I find it’s easier to control a straight line than a normal highlighter and the line ends up thicker too. They also add a pop of color to a page border.

The pens worked well and the paper feels smooth to write (brush?) on. However, the yellow page color is a big turn off for me. Colored pens always look better on bright white paper. 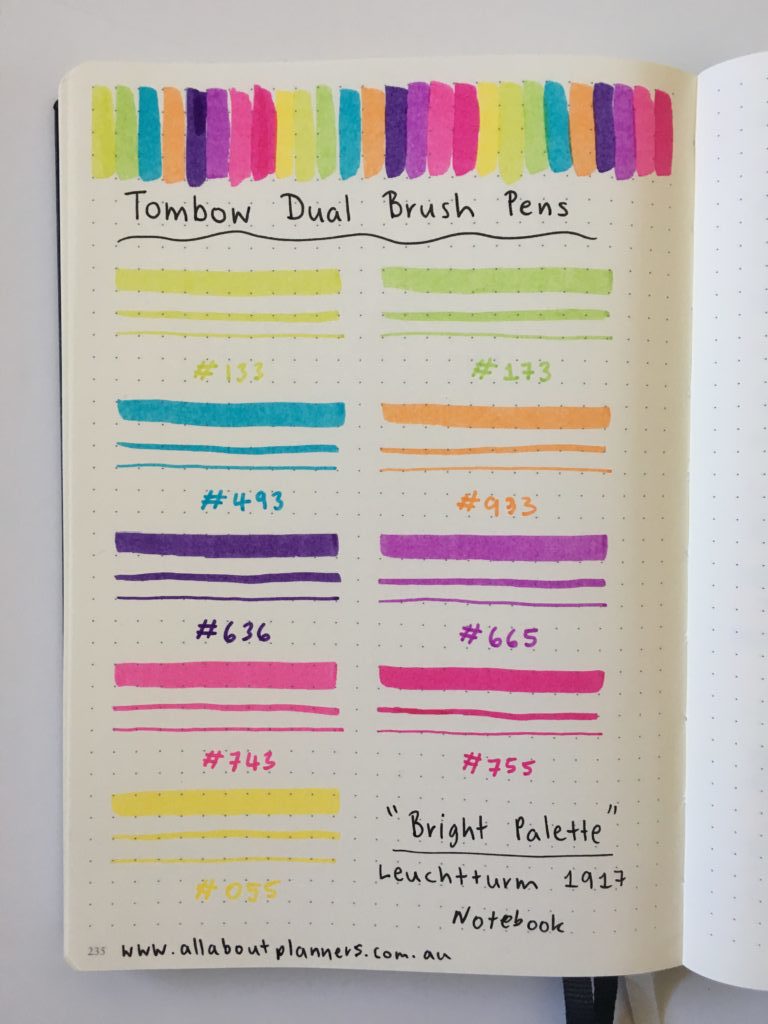 There was heavy ghosting in the Leuchtturm 1917 Bullet Journal Notebook. 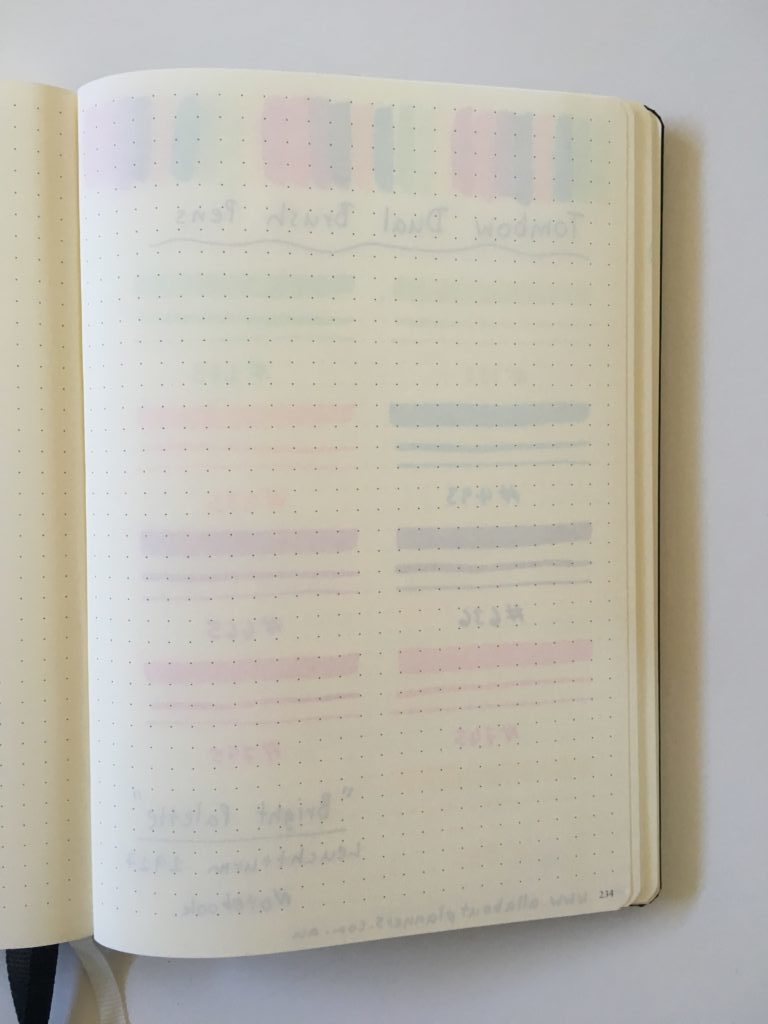 Related: Review of the Leuchtturm1917 Bullet Journal Notebook A5

Given that Rhodia produce notepads with paper that is designed for brush pens (won’t blunt the tips), I thought the paper in this notebook would feel nicer to write on. I was expecting paper similar to the notepad but it was moreso just like an ordinary notebook. 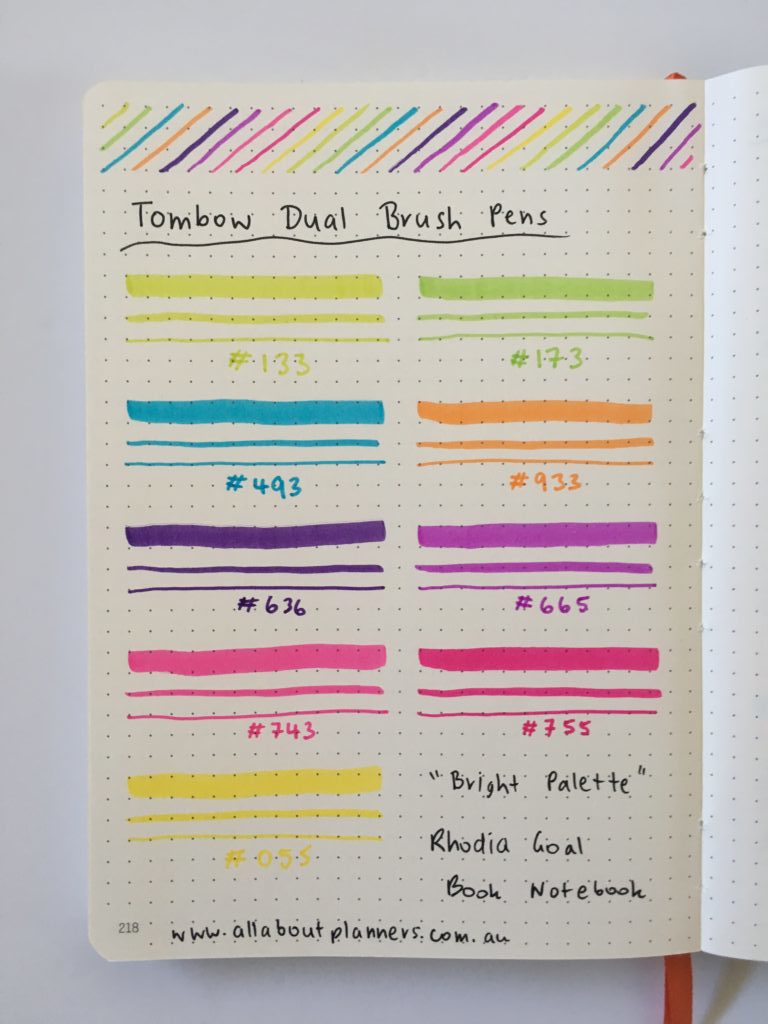 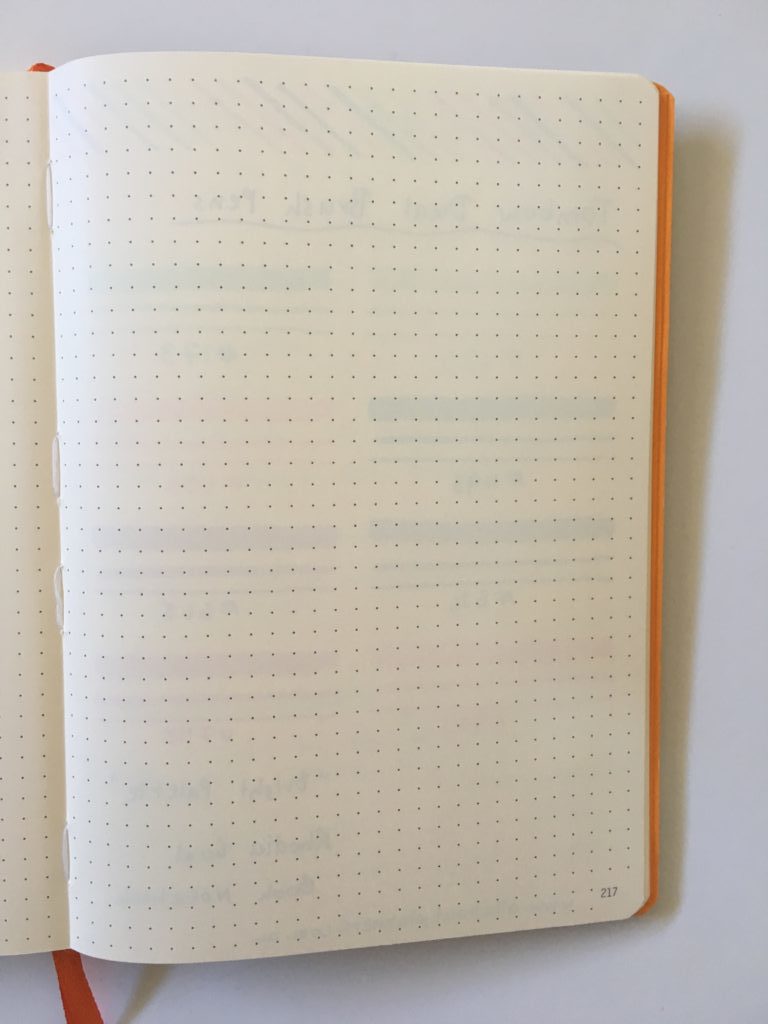 For all the hype about this simple notebook, I expected the paper quality to be better. While the paper feels smooth and nice to write on, the brush pens still ghosted in this notebook. 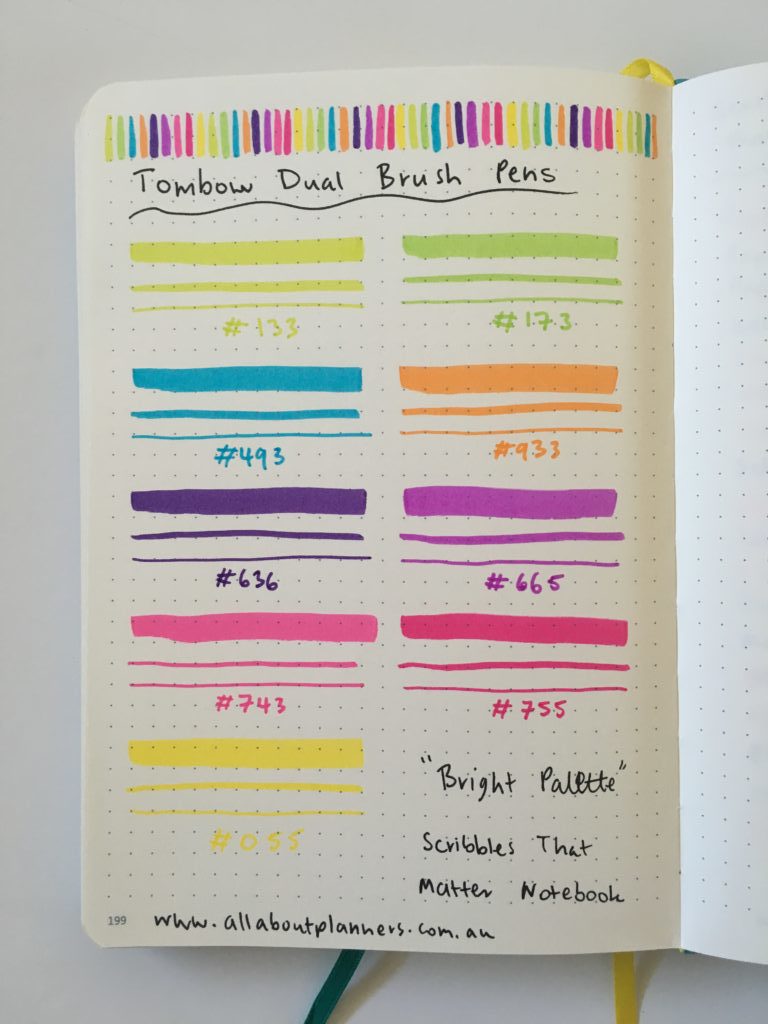 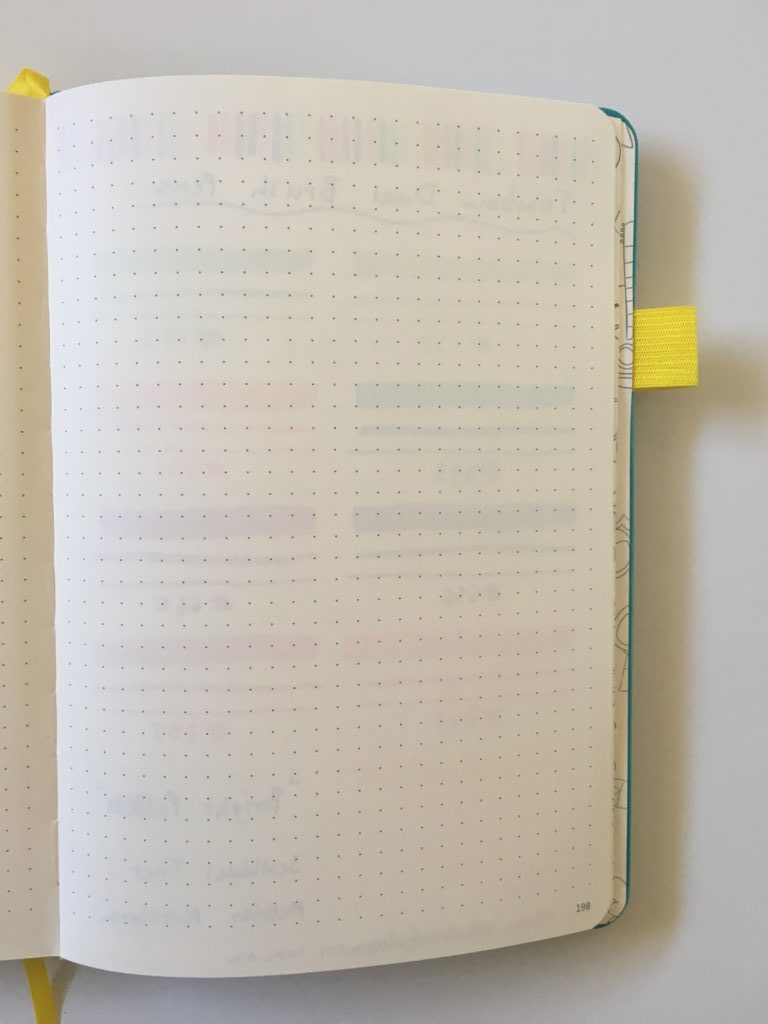 The Scrivwell dot notebook is ok – it’s basic, nothing special but a cheaper alternative to well known brand name notebooks. The paper reflects this also. Feels a bit cheap and would likely damage the brush tips if used all the time. 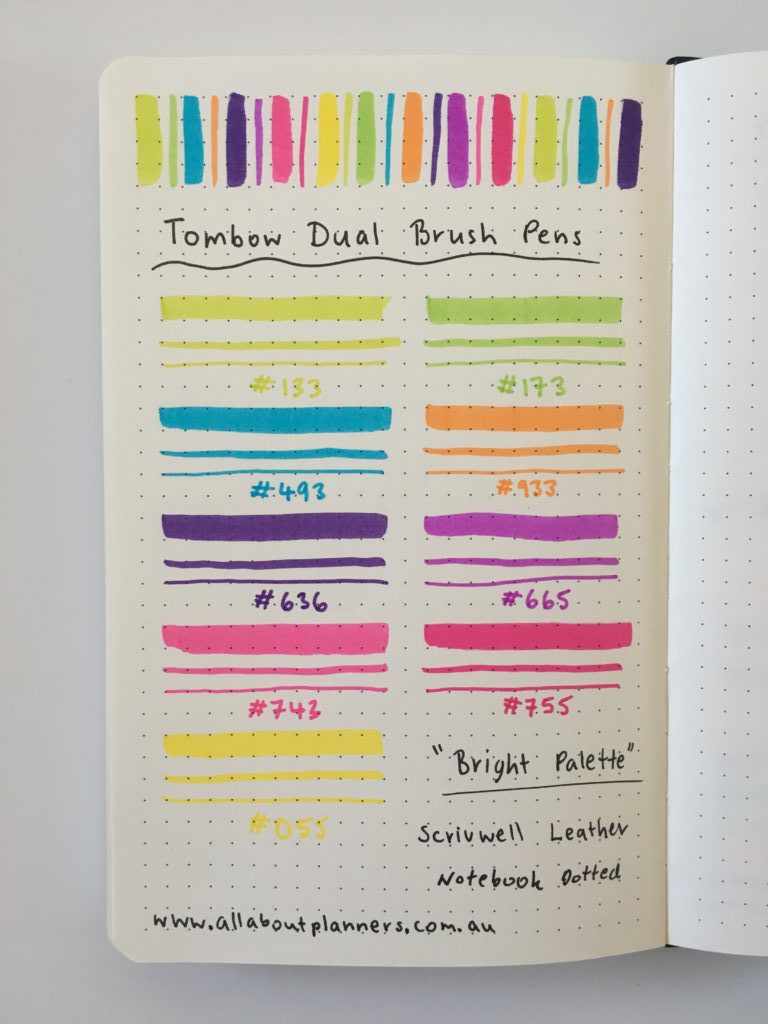 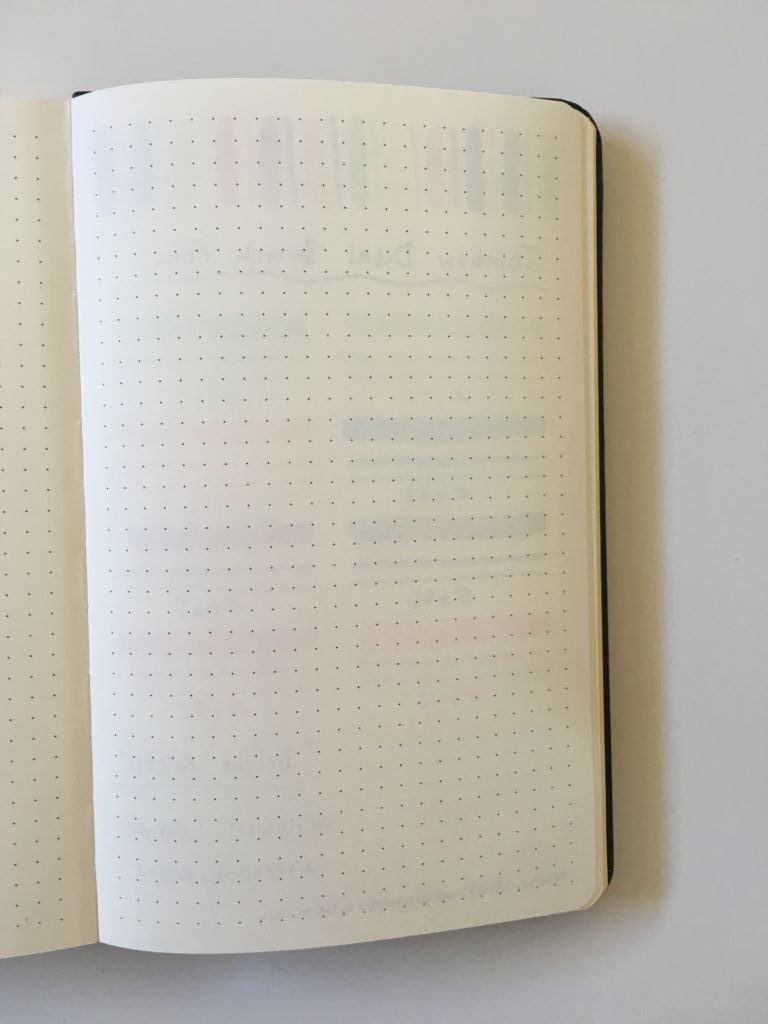 The colors of the Tombow brush pens really pop against the bright white of the paper. This notebook has the whitest paper I’ve found so far (for a dot grid notebook). 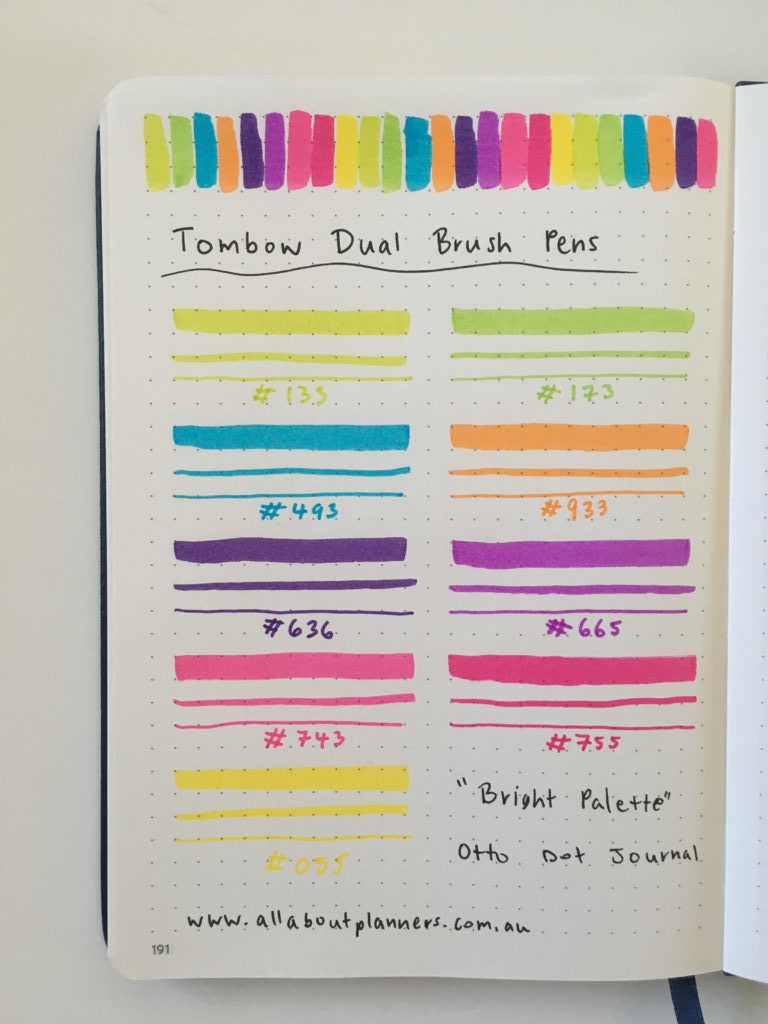 But once again, heavy ghosting. 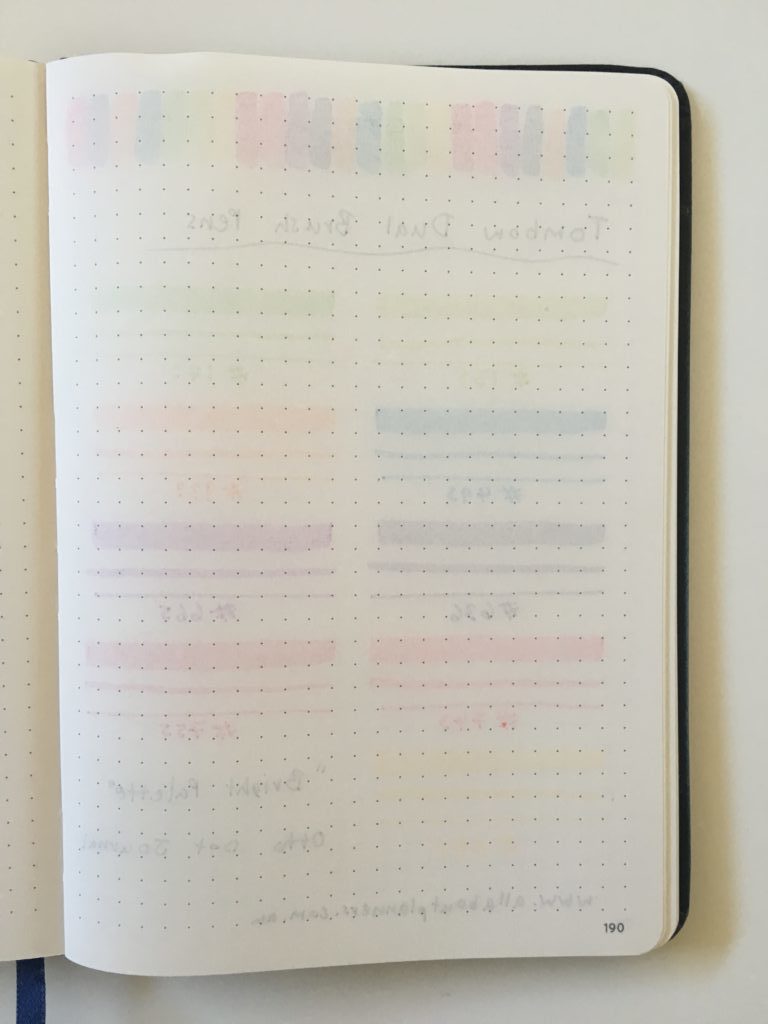 I wouldn’t recommend using brush pens in this notebook – it was quite cheap and the paper quality reflects that. It’s textured which means the fibres of the pen tip will likely be ruined quicker in this notebook than the others on the list. This notebook also doesn’t have page numbers pre-printed so it’s not the best option for bullet journaling. I’ve taken to utilising dot grid notebooks that don’t have page numbers for drawing up potential weekly spreads (like a ‘draft’ bullet journal). 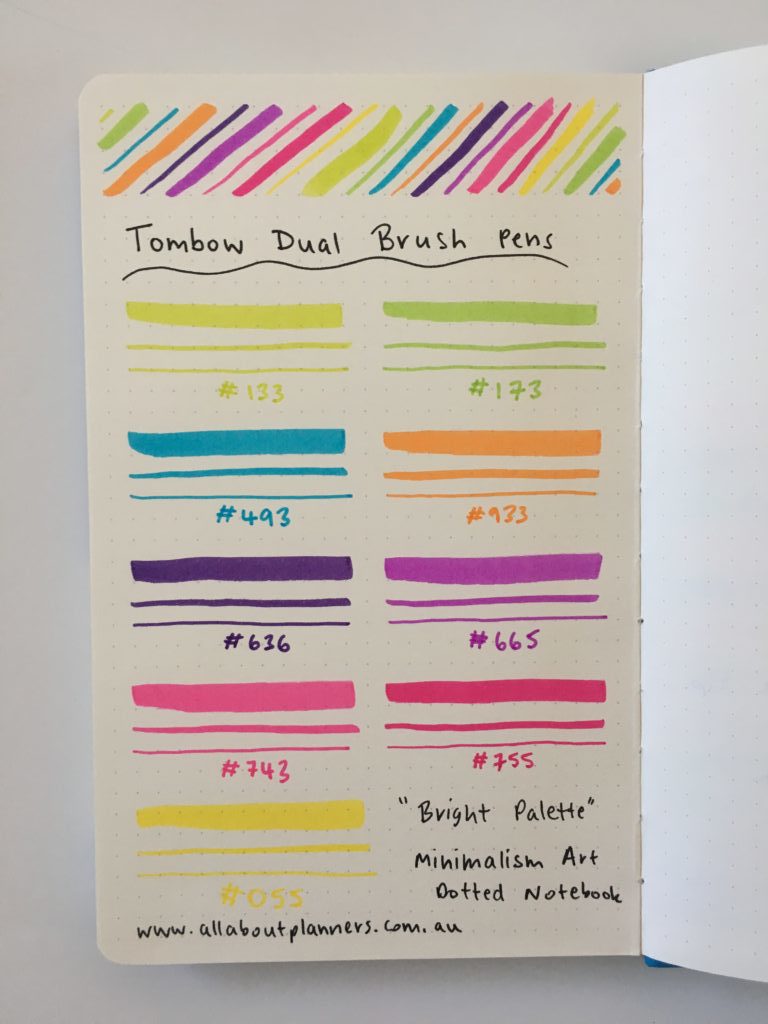 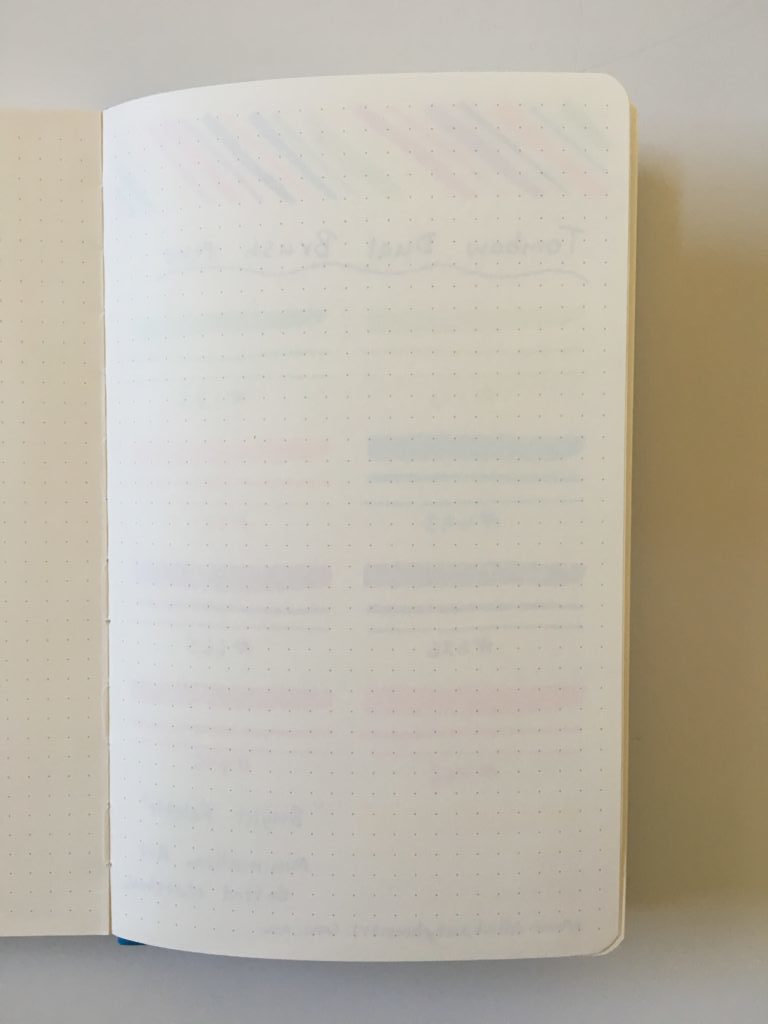 Found this at Big W here in Australia. Ok but wouldn’t recommend frequent use. 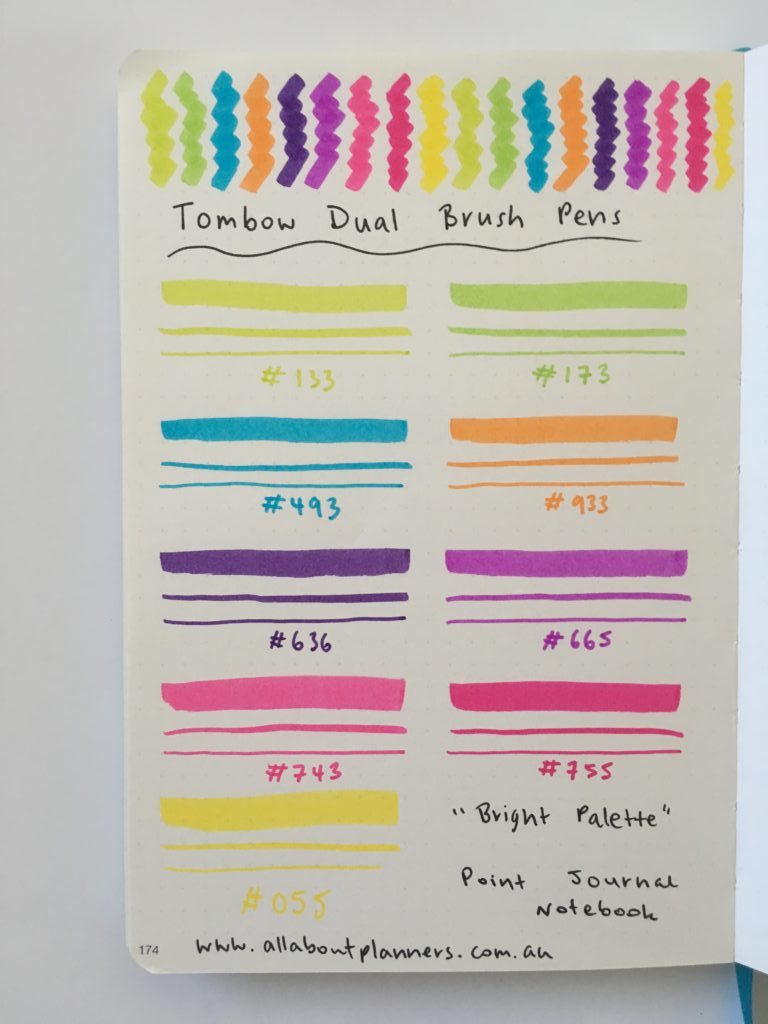 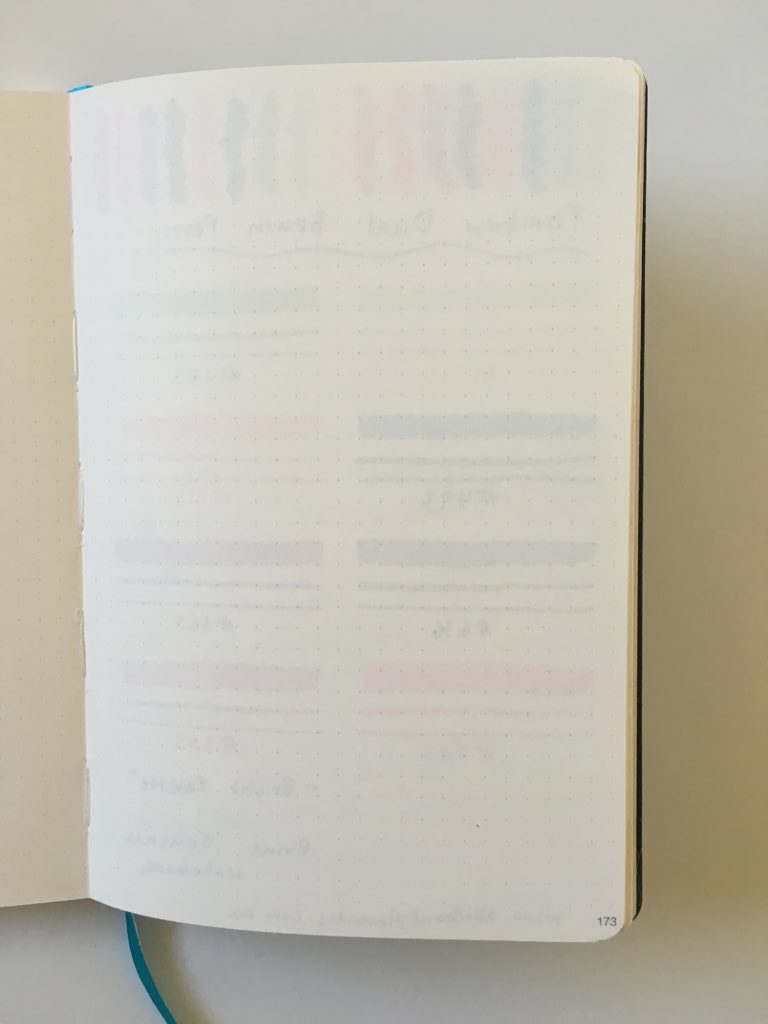 I wouldn’t recommend using brush pens often in this notebook. Occasionally would probably be fine but the pens resisted against the paper and I feel the tips would be ruined faster as more of a textured paper. 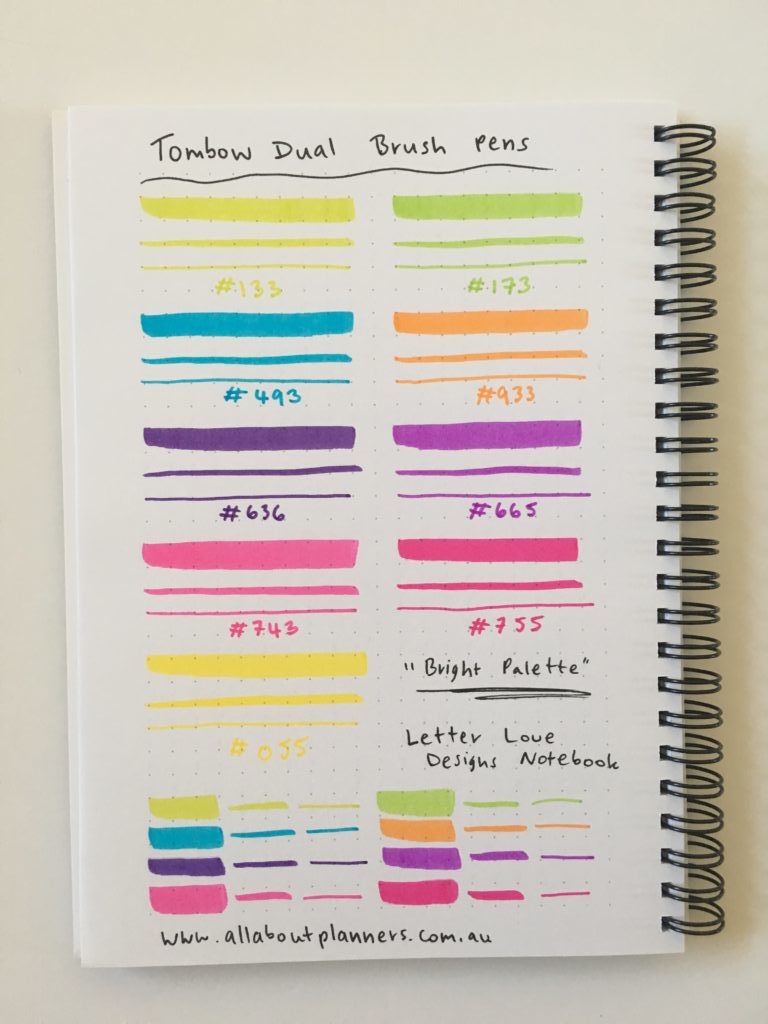 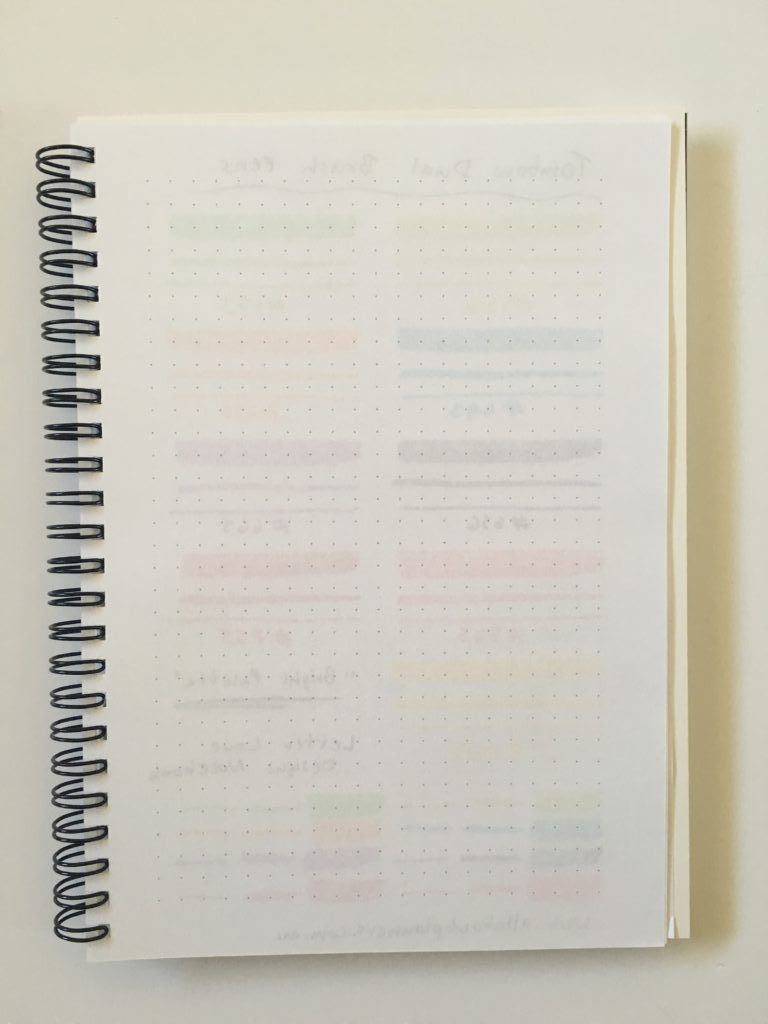 So which planner was the best?

None. The brush pen ink had ghosting on all of them – too much for me to feel comfortable recommending any of these notebooks as having decent paper quality. The notebook with the least amount of ghosting was probably the Rhodia Goal Book. Or just do what I do which is skip writing on the back side of the page.