Belgium is one of my favorite countries to date. Easy to navigate, clean, day trips are easy to do by yourself on the train, it’s close to England, France, Netherlands, Germany and Luxembourg, had a great range of stationery shops and most importantly, has tons of waffle and chocolate shops!

I visited Belgium for 4 days which included:

I found 1.5 – 2 days in Brussels to be a good amount of time to see the highlights, so here is my itinerary if you want to replicate it. 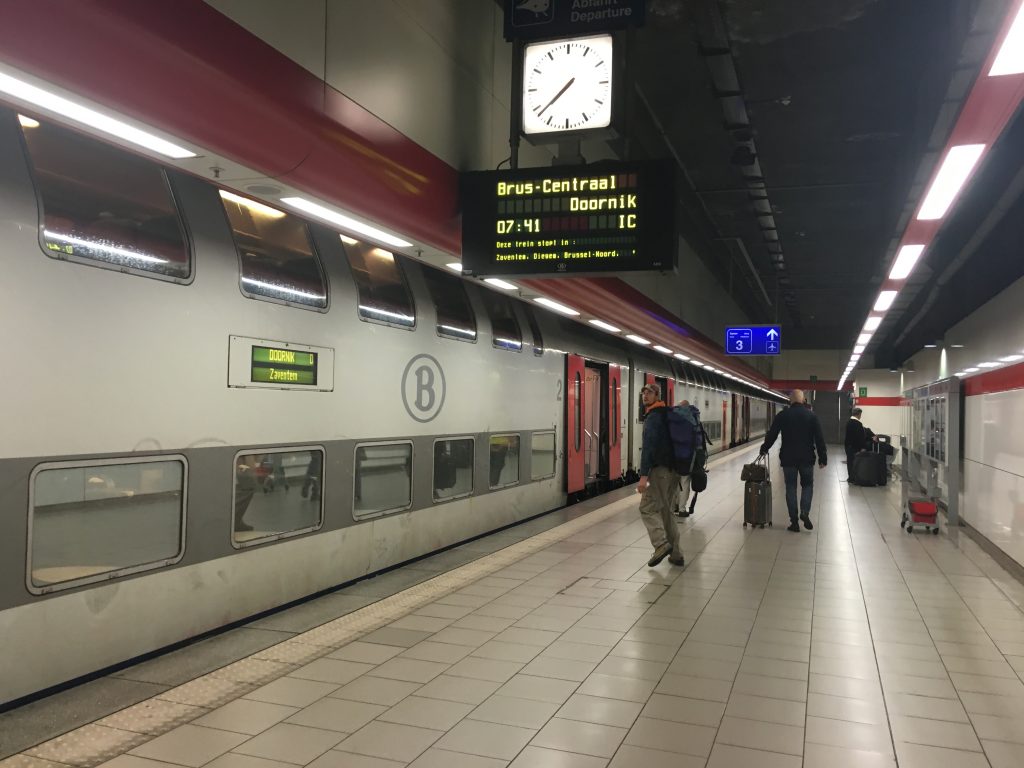 Best of Brussels in 2 days

You’re in Belgium so first priority should be… waffles and chocolate! I’ll be doing a separate post on the chocolate shops I recommend but for this itinerary I’d set aside a good hour or 2 to wander the cobblestone streets popping in and out of the chocolate shops. They start to look the same after a while and I found most of them actually sold a lot of the same expensive stuff but some of them had different things like a massive chocolate fondue fountain, floor to ceiling walls of chocolate and massive clear containers (you know the ones you put the scooper in and pick out how much you want) and lots of extravagant window displays. 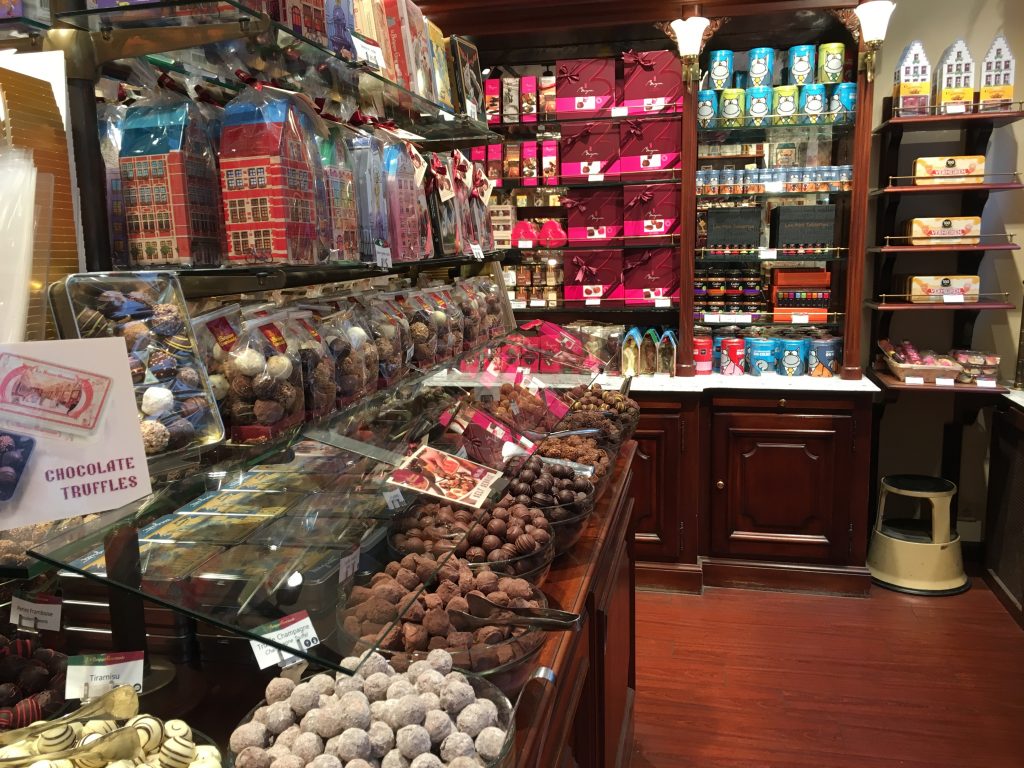 Don’t be enticed by the fancy toppings on the waffles, they dump so much cream and toppings on some of them that it drowns the waffle. 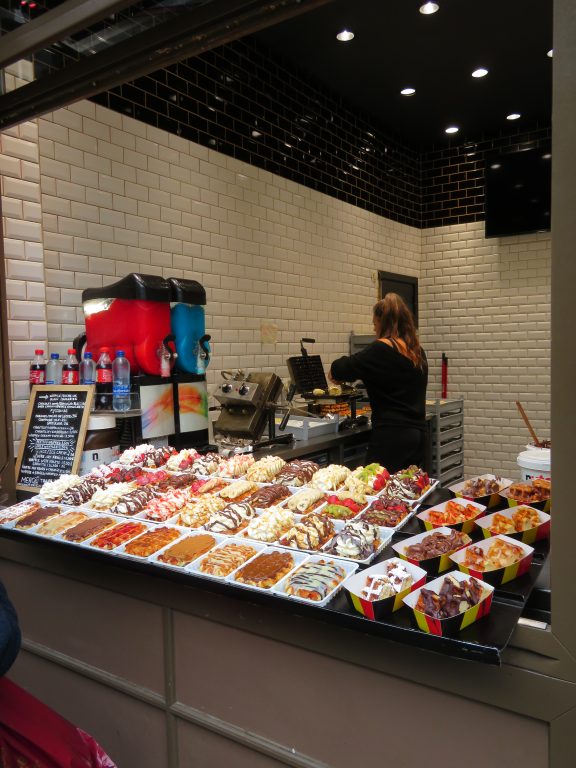 After wandering around for a while you’ll likely stumble upon The Grand Palace, otherwise known as the main square in Brussels. My photos don’t do it justice! Every building in the square is slightly different and equally impressive. 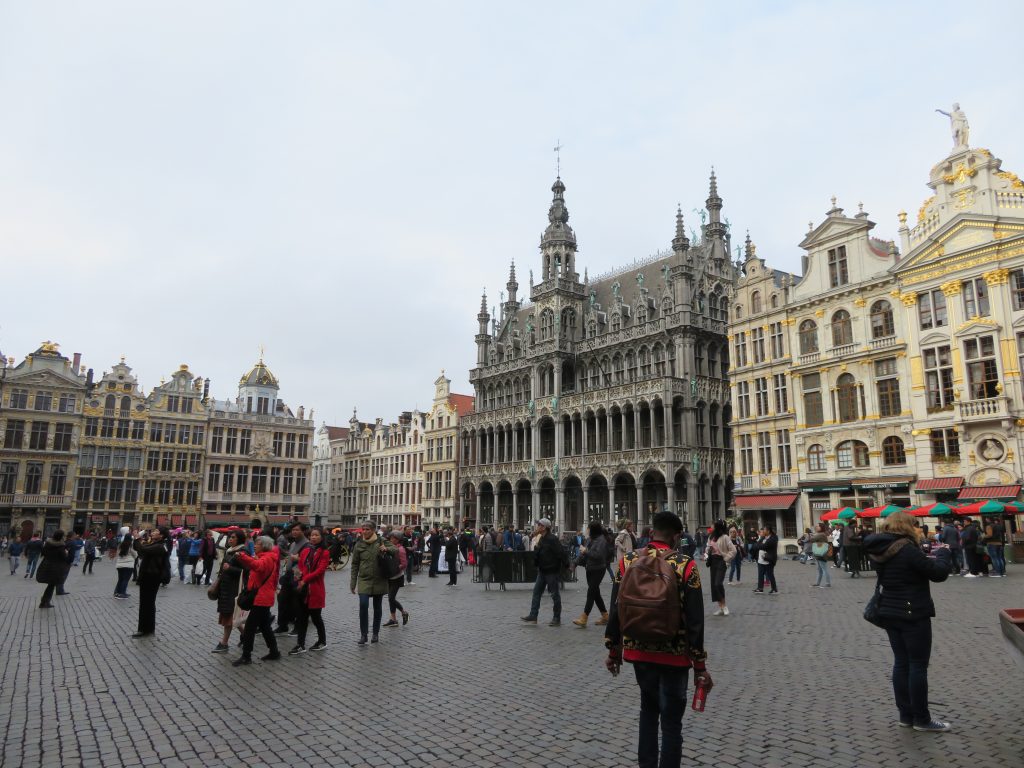 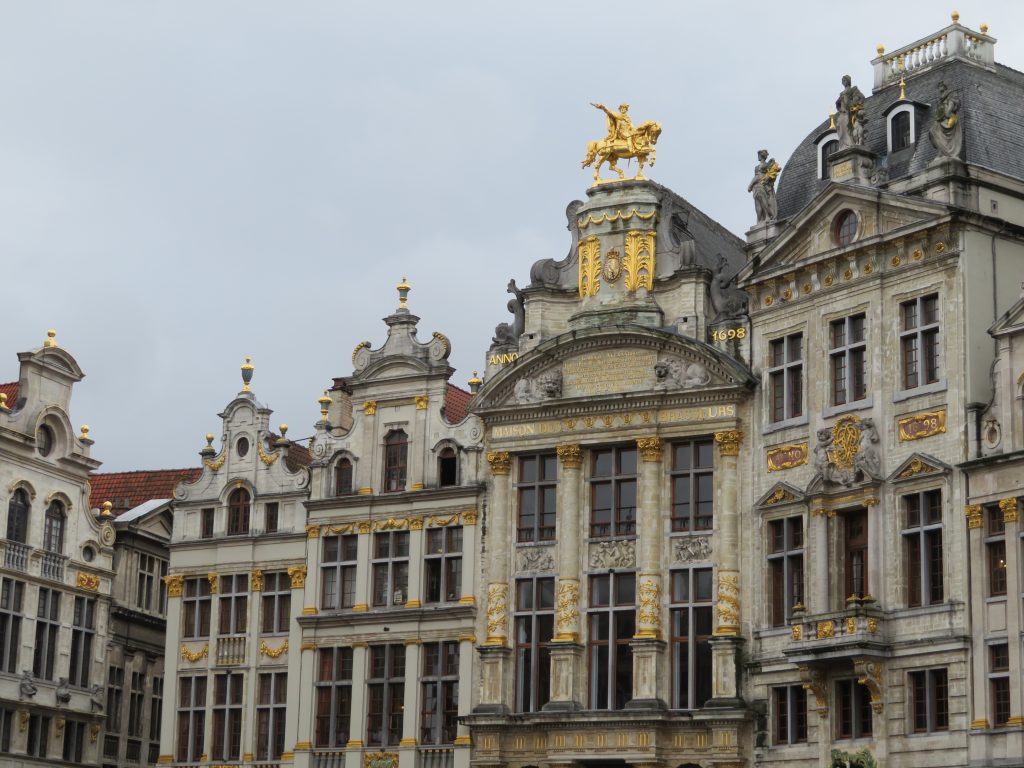 A short walk from The Grand Palace, is the Galeries Royales Saint-Hubert, an impressive passageway filled with plenty of over-priced chocolate shops with nice window displays. Excuse the terrible iPhone quality photo – it’s much brighter / nicer in person. 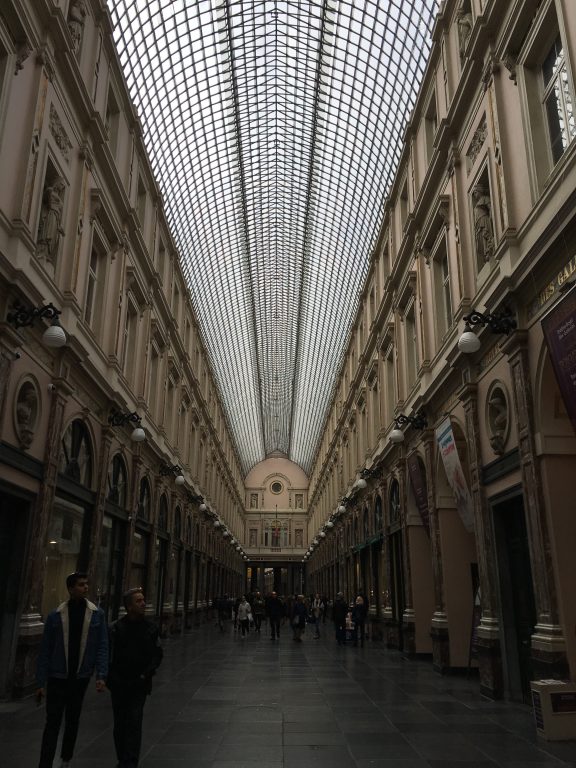 Continuing on from Galeries Royales Saint-Hubert, next head to St. Michael and St. Gudula Cathedral. It’s free entry to pop in and have a look. Construction began back in the 11th century!! It hosted a royal wedding back in 1999. 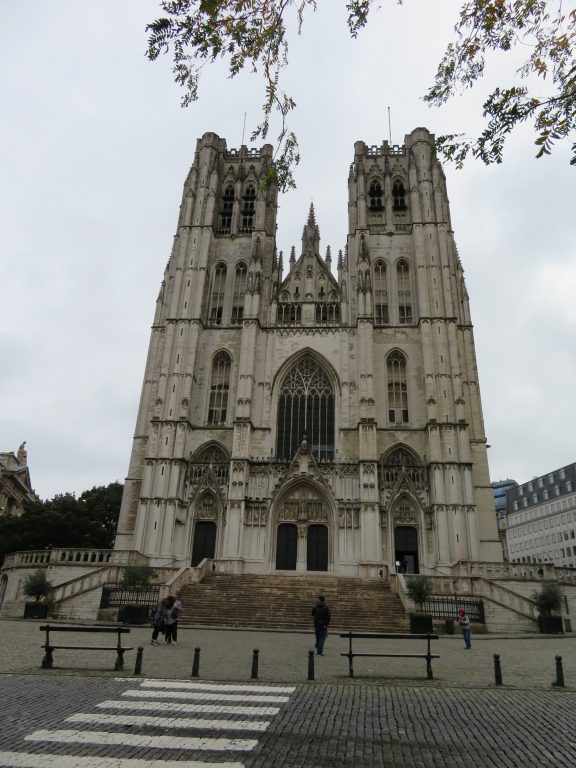 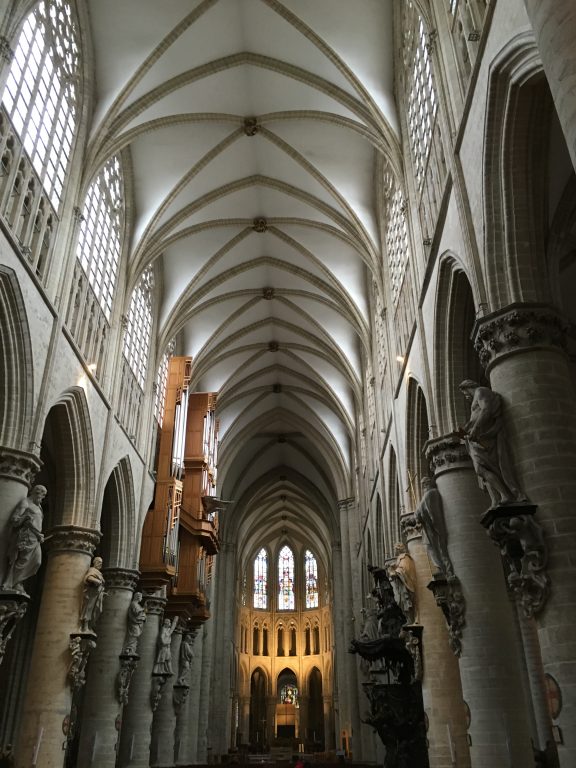 Past the Grand Palace and up the hill to Mont Des Arts for a photo spot. 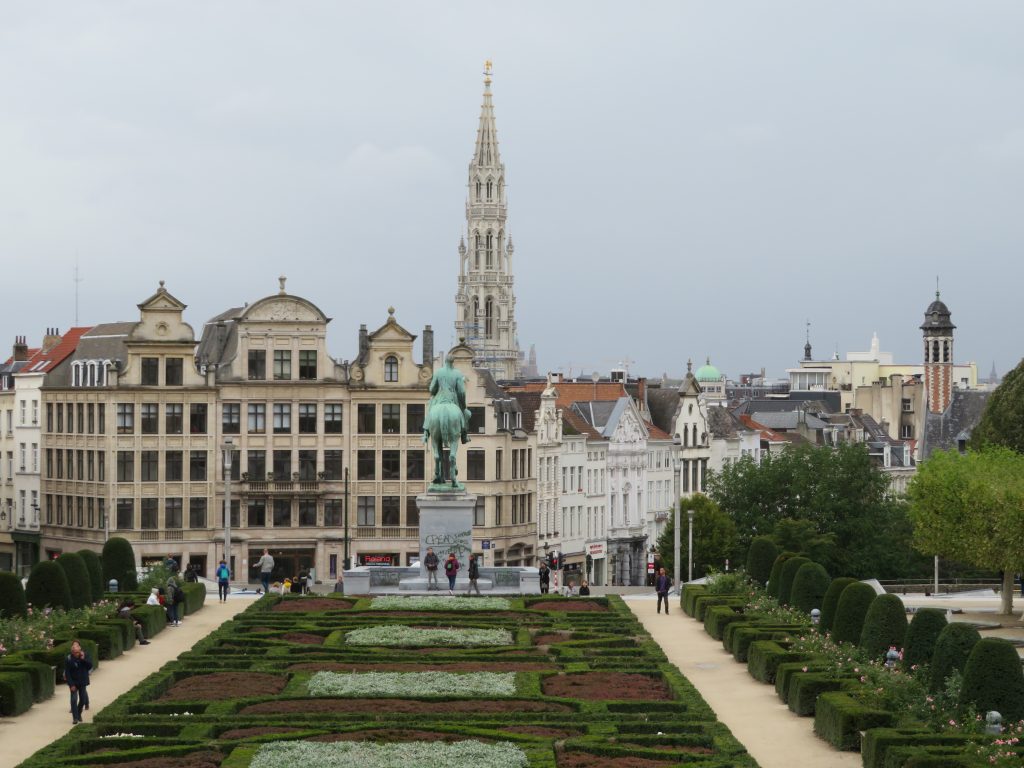 Keep going up the hill to the Museum of Magical Instruments. While you could go there for the museum, but I went there for the view. There is a restaurant on the roof of the Art Nouveau building which has a good view if you can get a table. I couldn’t so instead, I went down to the floor that has the toilets (free, clean toilets are hard to find in Europe!). There were benches against the walls so I stood on one of those and managed to get this photo through one of the windows. 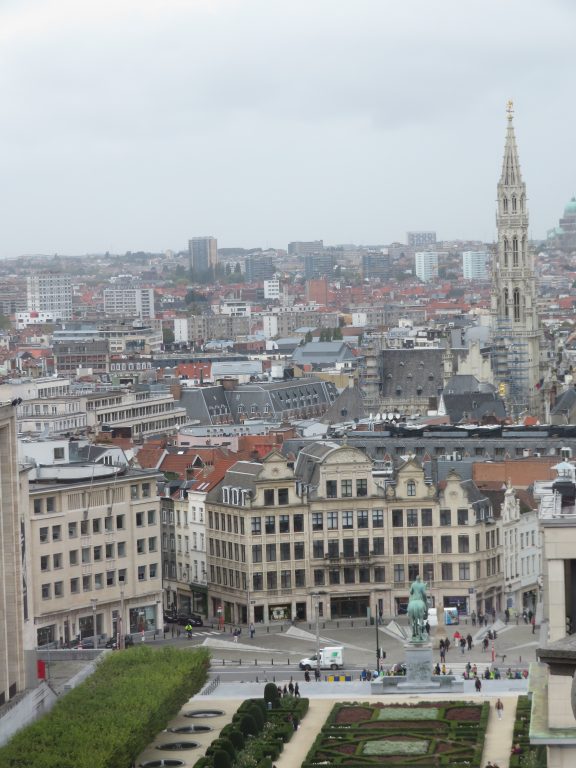 Opposite the Museum of Magical Instruments is the Belgian Royal Palace (tours inside are only offered in summer). 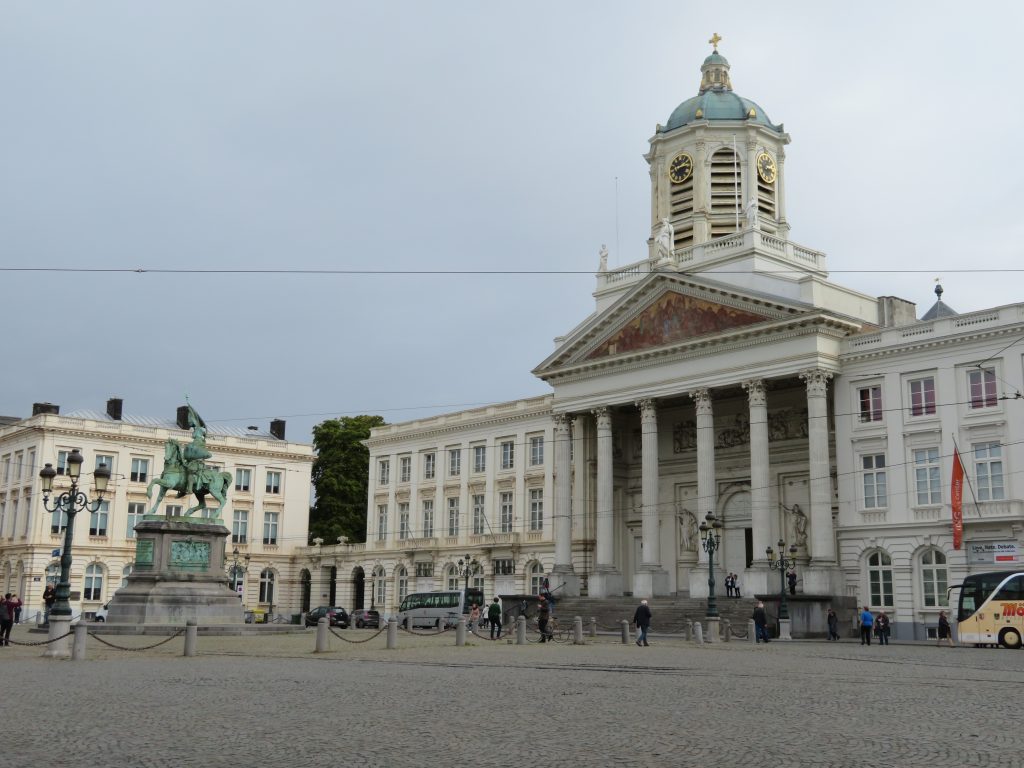 If you like stationery, Papeterie NIAS (Chaussée de Charleroi 4, 1060 Saint-Gilles, Belgium), is one of the best stationery shops I’ve come across in Europe. It’s open everyday (9:45am to 6:15pm) except Sunday. 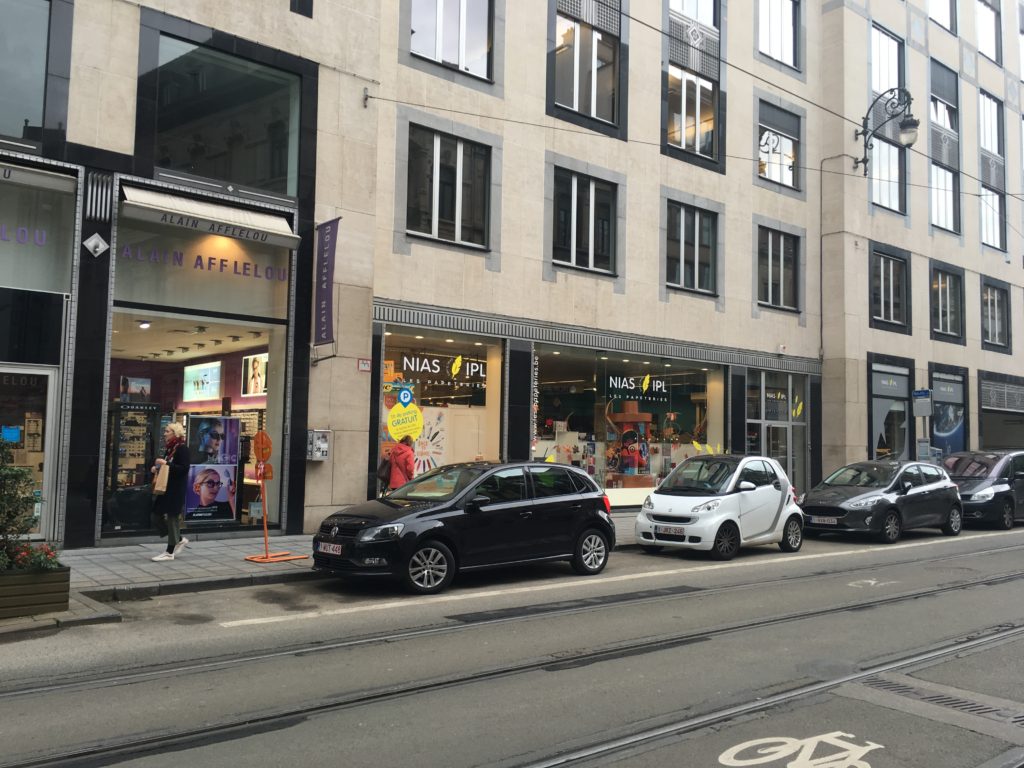 Next, head back to Rue de la Régence/Regentschapsstraat (road with the trams). If you’re skipping the stationery shop, just turn right after the Royal Palace. Along this street you’ll pass the Church of Our Lady of Victories at the Sablon until you reach the Palais de Justice de Bruxelles otherwise known as the Law Courts of Brussels. Unfortunately scaffolding almost completely covered the nonetheless very impressive building. 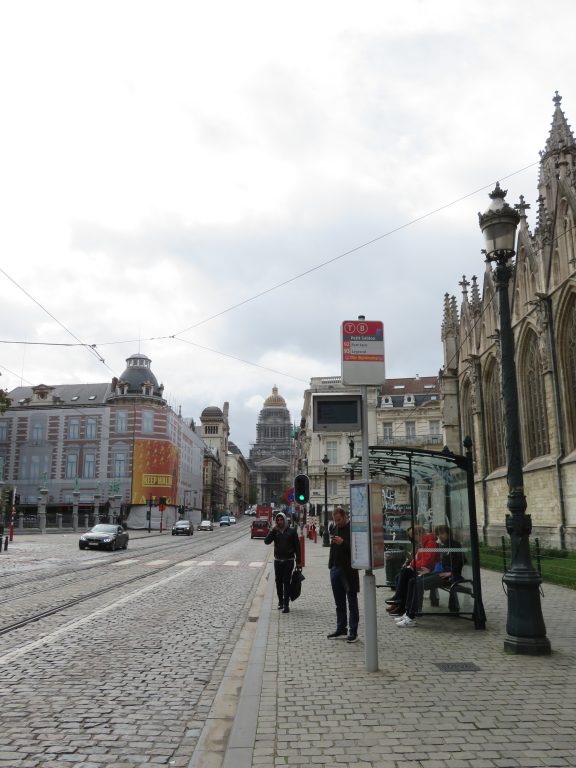 I had seen numerous Instagrammers take pictures on the stairs and assumed you had to enter the courts to find those stairs. So after an airport style security check we went wandering around the courts and found some impressive stairs, but they didn’t look quite like the ones I’d seen on Instagram. As we were heading back out past the security check I saw various people wandering in the same direction and decided to follow… and found the stairs. You don’t actually need to go through security, you can access them to the left of the main entrance.

If you do decide to go inside, it’s open Monday to Friday from 8am to 5pm, closed Saturday and Sunday. 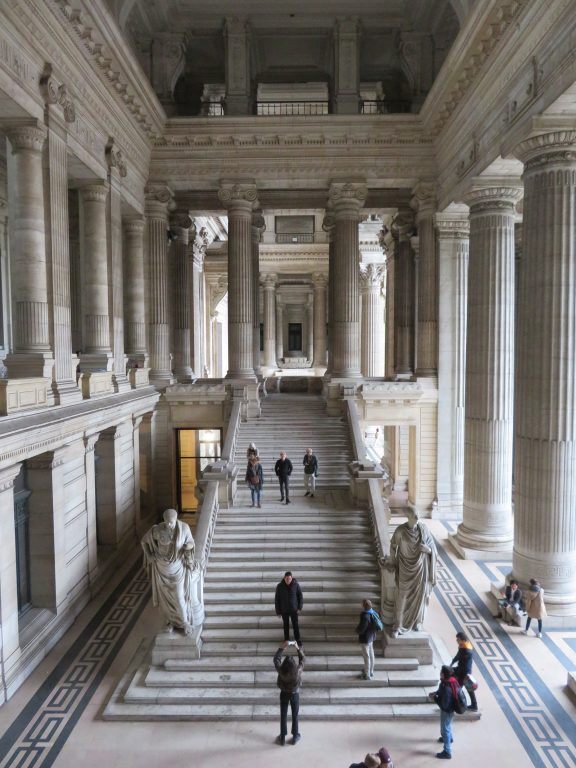 After the Law Courts, head towards the ferris wheel nearby, there’s a view from the balcony (put Place Poelaert into Google Maps) It’s not quite high enough but with some zooming / cropping on your camera you can still get a good photo of the view. There’s a free glass elevator that will take you down to street level Rue Haute where it’s about a 20 minute walk back to the main square. 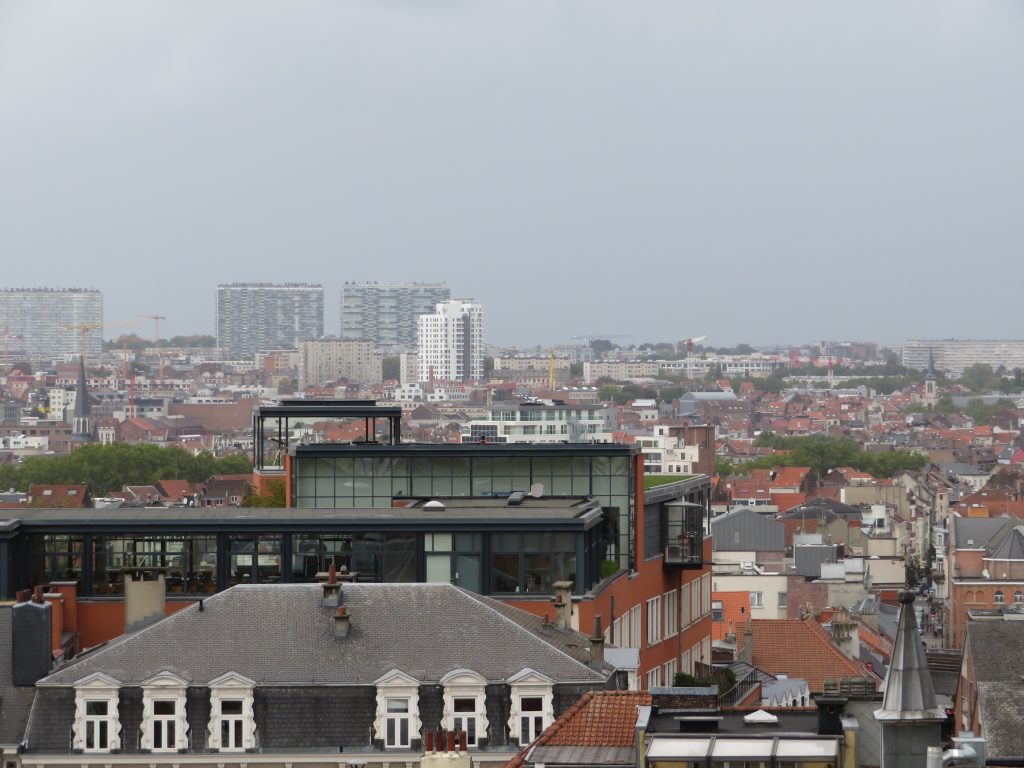 Head back to the Grand Palace to see it lit up at night. 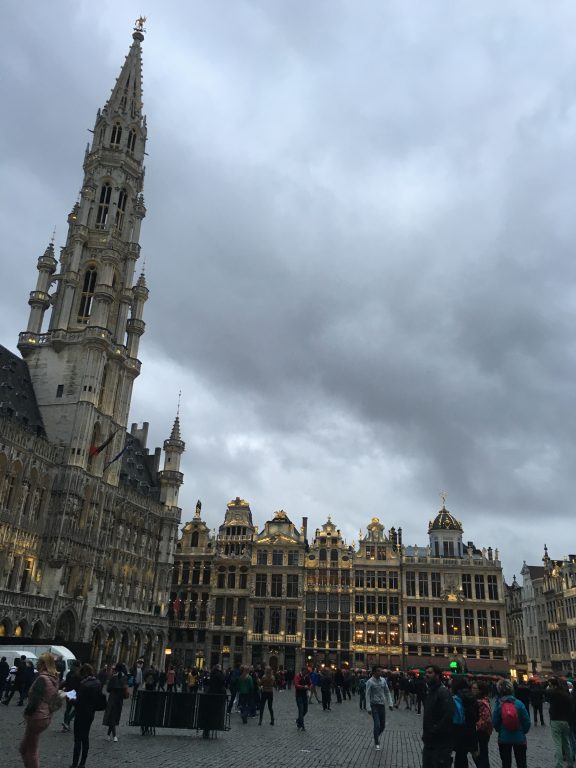 If you haven’t already used the train in Belgium then today is the day! Very easy to navigate and never felt unsafe. Just don’t get confused by the main train stations: Brussels Central, Brussels Midi (otherwise known as Brussels South) and Brussels Nord. 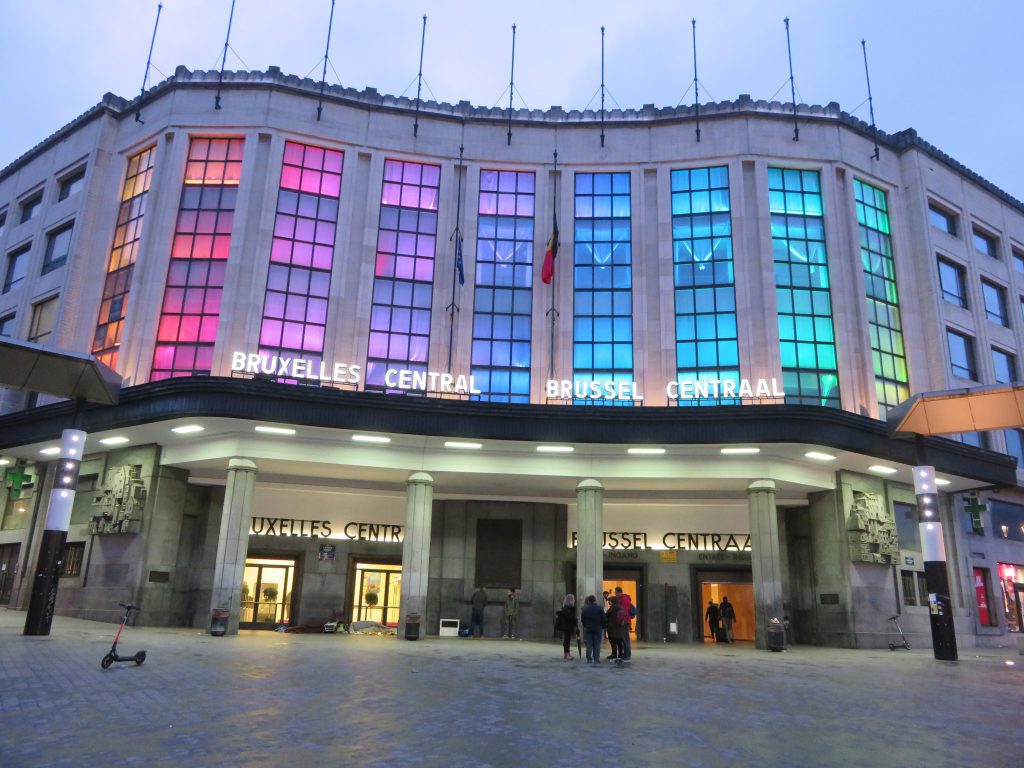 There are ticket machines but I found it easier to just queue and ask for the cheapest ticket at the information counter. I’ve included more info on how to take the train at the end of this post. 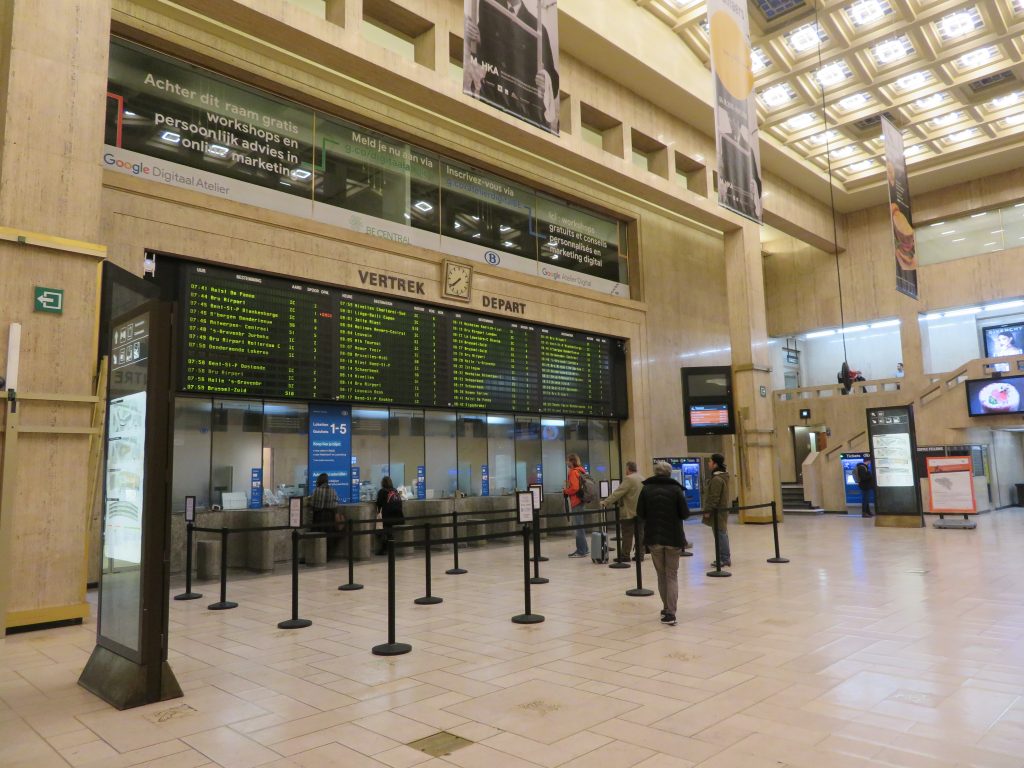 You can choose to either do a half day trip to Antwerp, Ghent or Bruges, or spend more time exploring Brussels. I opted to go to Antwerp in the morning and see more of Brussels in the afternoon. I’ll be doing a separate post with my Antwerp itinerary. If you’re pressed for time and only have 2 days in Belgium, Bruges was my favorite of the three. I spent 3/4 of a day there and think a half day would be a bit rushed but a half day is better than not going at all!

You have a few options for viewpoints that are a bit farther out of the city. I wanted to do the National Basilica of the Sacred Heart in Koekelberg but it was too far out of the way (approx 1 hour each way from Brussels Central Station), with not much else I wanted to see in that area. Apparently it’s the 5th largest church in the world and if you Google it you’ll see what I mean by the impressive view. If you do choose to go there, some things to note:

The basilica’s website doesn’t state what is considered Summer and Winter so if visit on the cusp of seasons like I did (in October), I’d ask your hotel’s reception to call the church about opening hours.

Instead of the Basilica, I went to Parc du Cinquantenaire. Keep in mind the viewpoint is closed on Sundays. It’s still worth visiting the park even if you don’t go up to the top. If you like museums, the building houses the Royal Museum of the Armed Forces and Military History, Art & History Museum and the Autoworld (car museum). 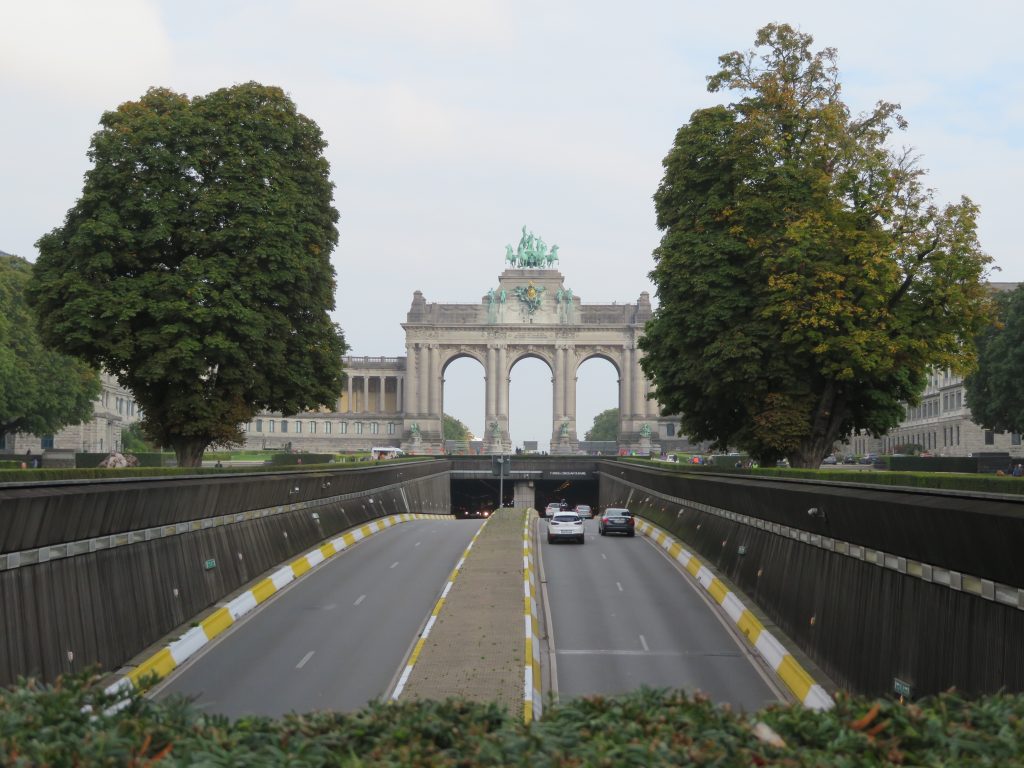 It can easily be reached via the metro. Hop off at Schuman station. You’ll know you’re in the right place when you see the European Union buildings. 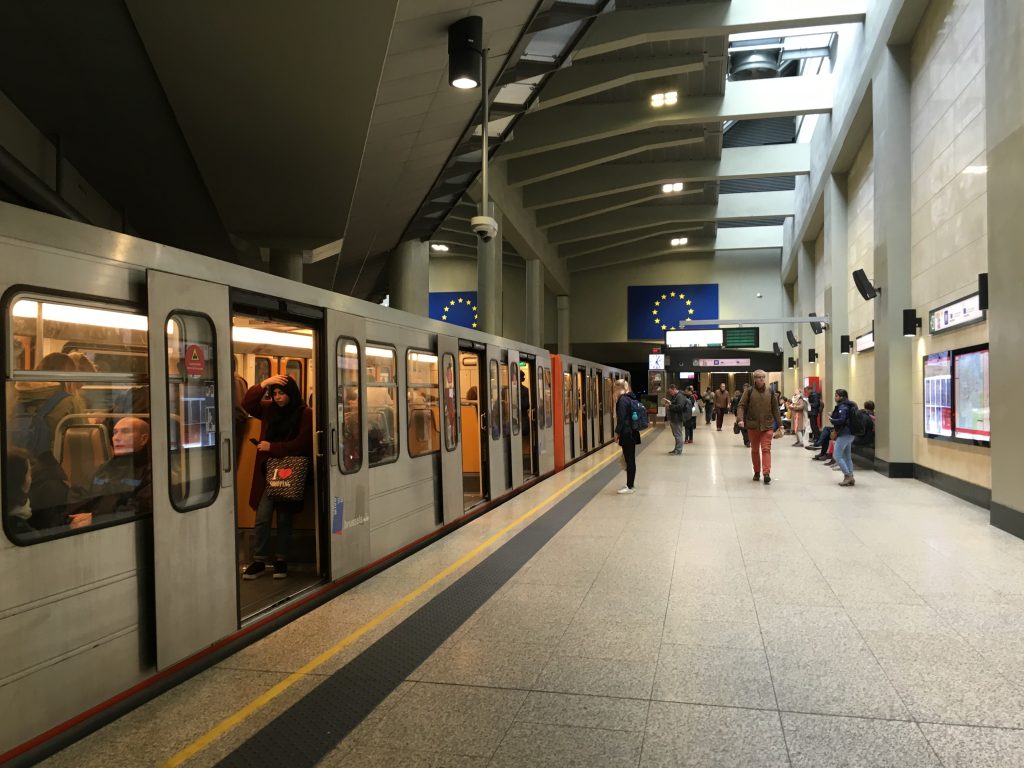 Another option, is Atomium, a museum built for the World’s Fair back in 1958 which is modelled after one unit of iron crystal magnified 165 billion times(!!) to look like an atom. There’s sphere compartments you can move between for different views over Brussels and beyond. It has (what I think), is a pricey entrance fee at 12 euro for 18 to 59 year olds so I skipped it.

Where to stay in Brussels

I stayed at the Hotel NH Brussels Grand Place Arenberg which was conveniently located close to Brussels Central Train Station (important for day trips and if you’re arriving by train on the Eurostar). It was a short 5 minute walk to the Grand Palace (main square).

Not that important but a nice extra, is that they actually provide a generous amount of shampoo, conditioner and body wash. 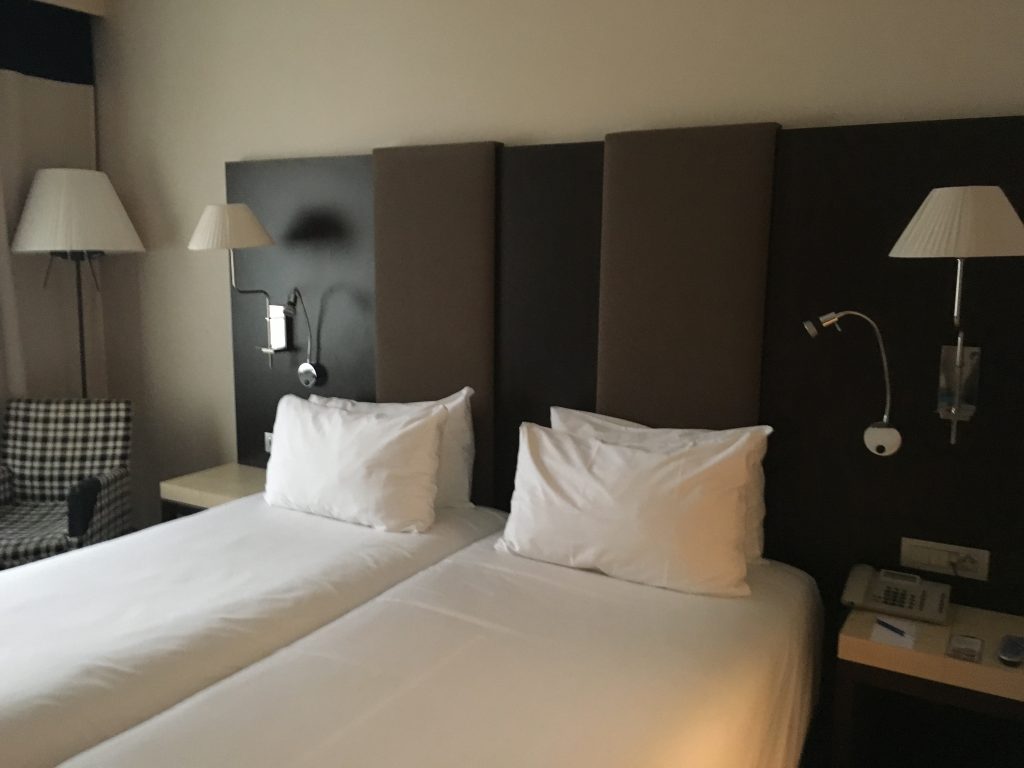 Not sure who designed the hotel room but it had a weird window into the bathroom with frosted glass.. that wasn’t that frosted – you could still clearly see the other person’s silhouette when they were in the bathroom. Not a dealbreaker… but still weird. 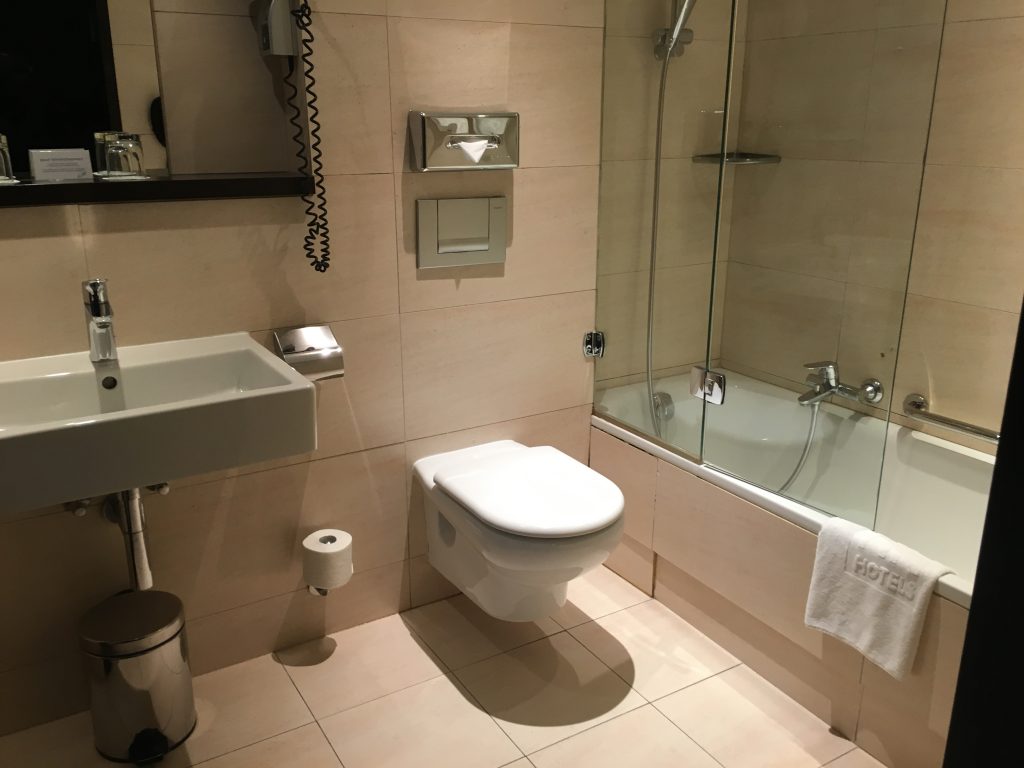 Where to Eat in Brussels

For dinner, I recommend Brasserie de la ville. I went there 3 days in a row hoping for Shephards Pie (they didn’t have the ingredients each time I went 🙁 however they did have a yummy chicken, mushroom and cream with pastry dish. 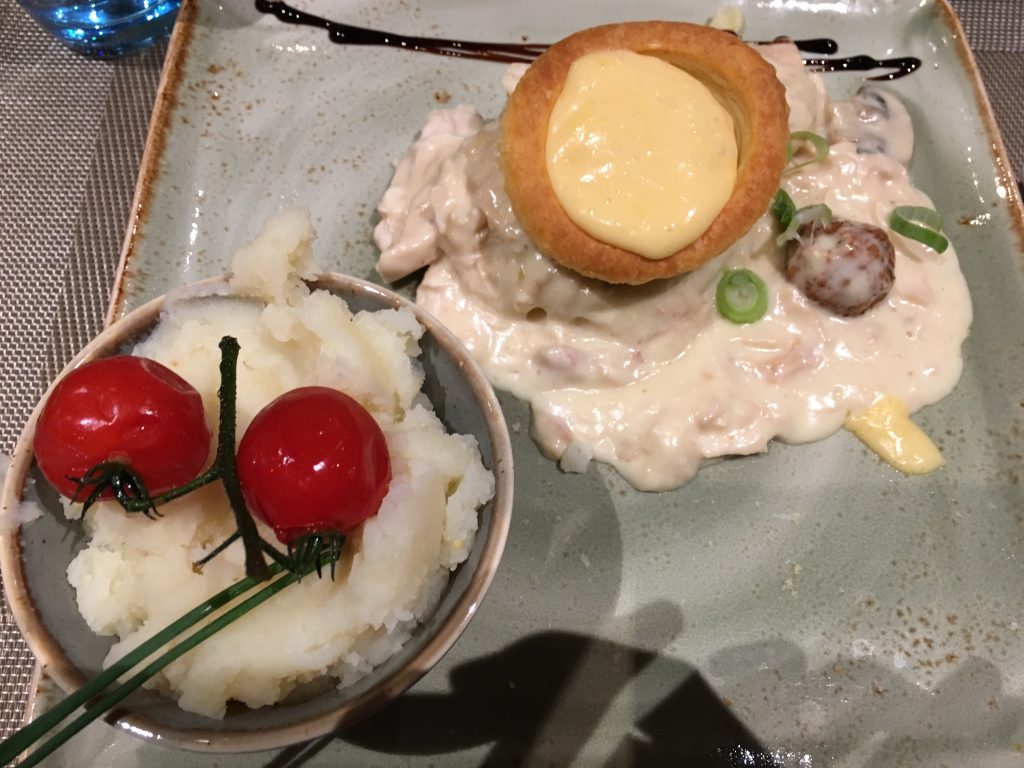 Note that a lot of food places seemed to be closed on Sundays for some weird reason so if there’s a place you really want to eat at, plan accordingly.

There was another restaurant in one corner of the Grand Palace called ‘T Kelderke that was very difficult to find – it’s underground! I had meatballs and my mum had the same chicken dish the other restaurant served. The food wasn’t that great. Not sure if it’s a Belgian thing or what but the mashed potato was cold (yuk!) 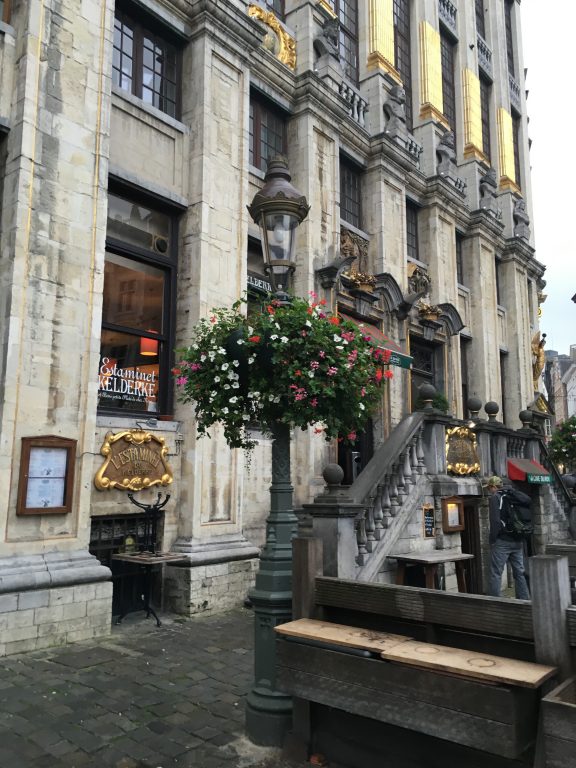 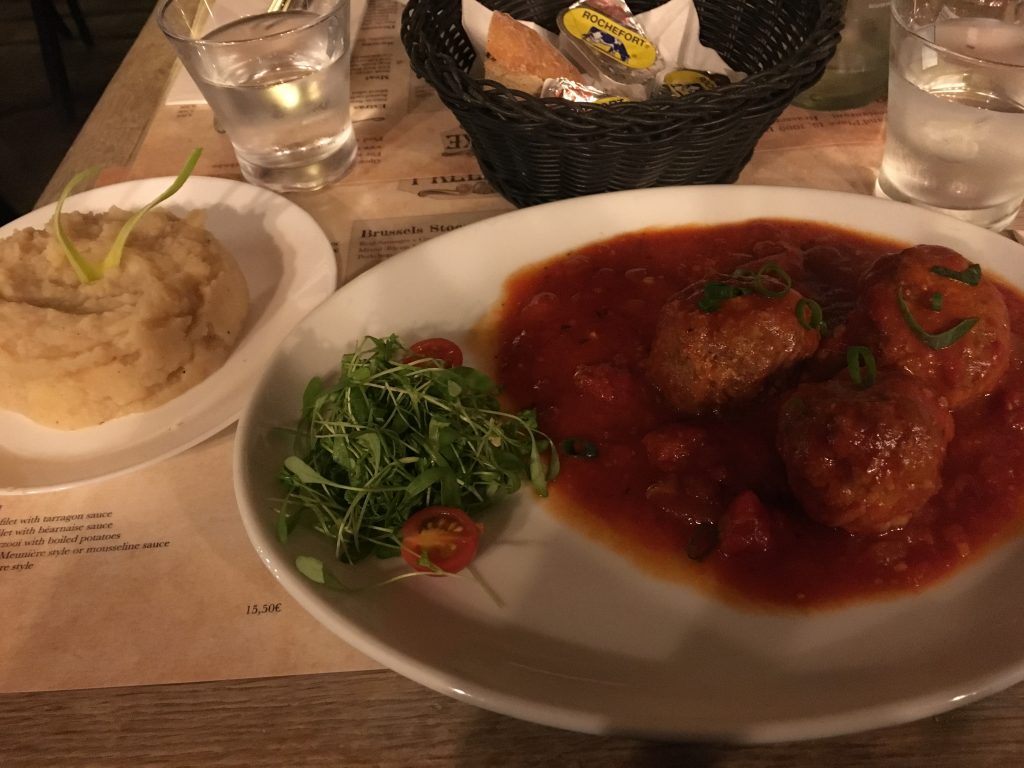 The last place we tried was Le Roy d’Espagne which looked like a medieval pub. Despite it’s 4 star Google rating, the lasagne and fish and chips we ordered were average – I wouldn’t recommend it.

Head a street or 2 behind the main square for better food places. 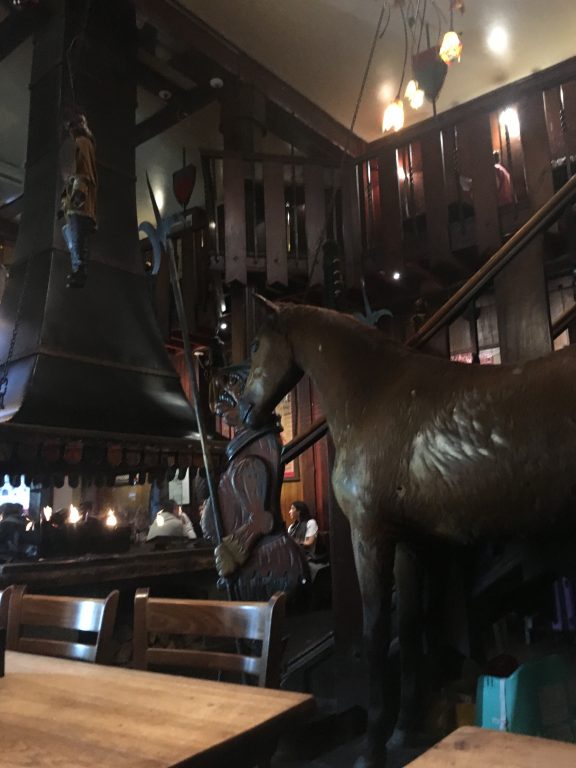 Manneken Frites at Rue du Midi 30, 1000 Bruxelles is much hyped… but in my opinion overrated. Having said that I’m not a huge fan of chips and well, they just tasted like chips you can get from anywhere. 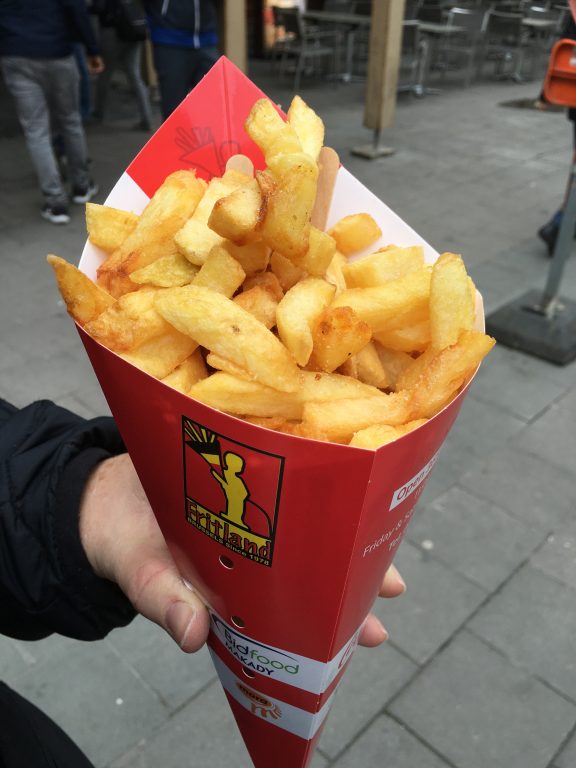 As expected, there were many waffle and chocolate shops – and not all of them are good! I’ll be doing a separate post on which ones I do (and don’t) recommend.

The train is easy to navigate and there are 2 card / deals you should check before going which are based on the number of trips.

This was my plan:

If you’re under 26 you can get the Go Pass 1 which worked out to cost 51 euro for 10 journeys. If you’re over 26 there’s the Key card (no age restriction) which offers 10 journeys for 76 euro. A senior is classed as over 65 years old 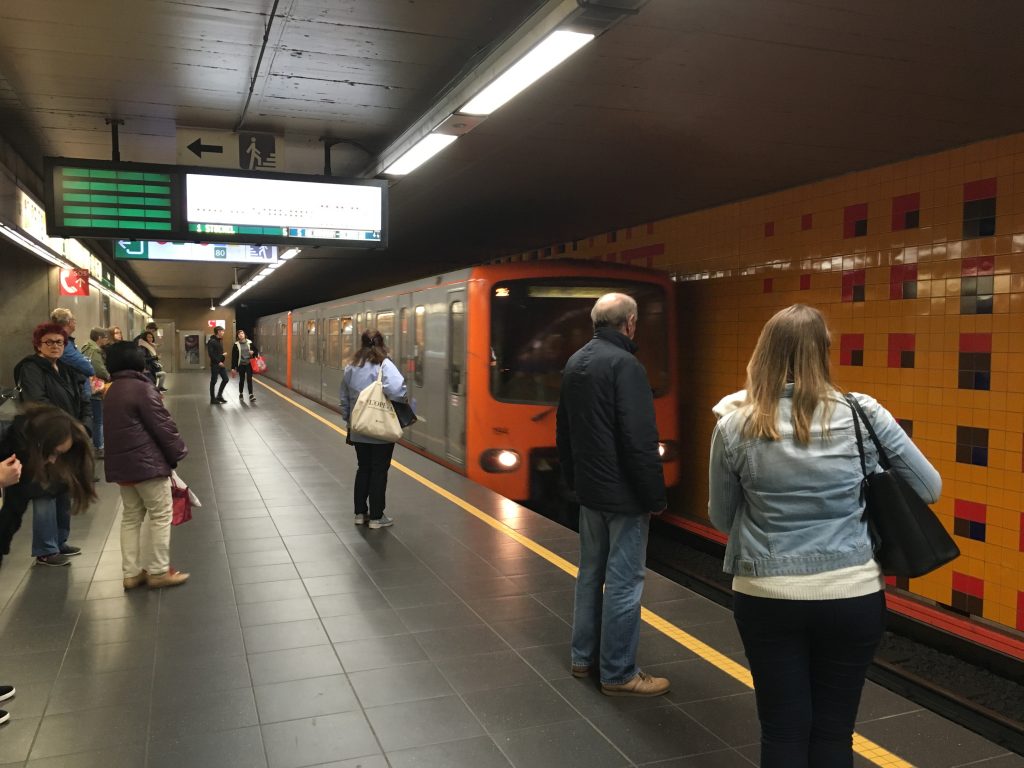 Have more time to spend in Belgium?

I’ll be doing more posts soon with itineraries for the day trips I did to:

Planning your next trip? Download my travel planning spreadsheets