Viator is a good website to give you ideas on where to go, especially day trips. However, $90 AUD for a day trip on a bus to see Bruges and Ghent… I don’t think so. It’s cheaper to take the train plus you can decide what time to leave and how long to spend in each place.

There are discount passes for the train like the Go Pass (under 26), key card and senior tickets however I found it was just easier to go to the ticket counter at Brussels’ main train station and buy a ticket on the day. Then I didn’t have to worry about possibly having the wrong ticket and figuring out the ticket machine.

After exiting the train it’s a short walk into town. I opted to take the 20 minute ‘scenic route’ into town by walking through Minnewater park. My visit was in early October and I was hoping to see some Autumn leaves… but everything was still green. If you do happen to time the leaves changing, I’ve seen many pretty pictures of Begijnhof in Autumn (very old white building – nuns currently live there).

I switched my itinerary to make the most of good weather for photos. By doing this my visit had to be on a Saturday. I arrived at the main square of Bruges around 10am which is of course, the beginning of peak time. It was a 1 hour wait in the queue (started queueing at 11am) and then 366 steep steps to the top of the Belfry. Once at the top I was quite disappointed the gaps in the wire are too small to fit a camera lens through (I don’t have a fancy camera with a big lens – I have the Canon SX730 HS). The windows were also up very high making it hard to get a good view out of them (and they were really dirty).

Belfy of Bruges. It’s free to enter the courtyard if you don’t want to go up the tower. 10 euro entry fee. Open 9:30am to 6pm 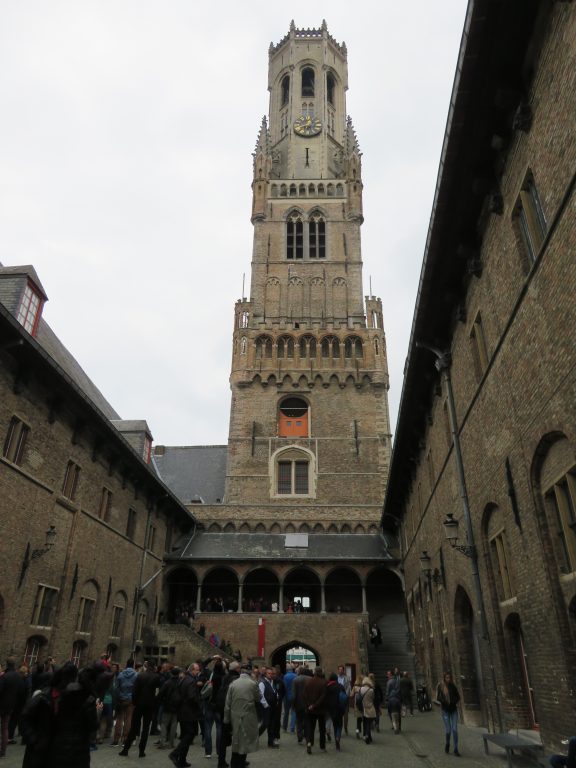 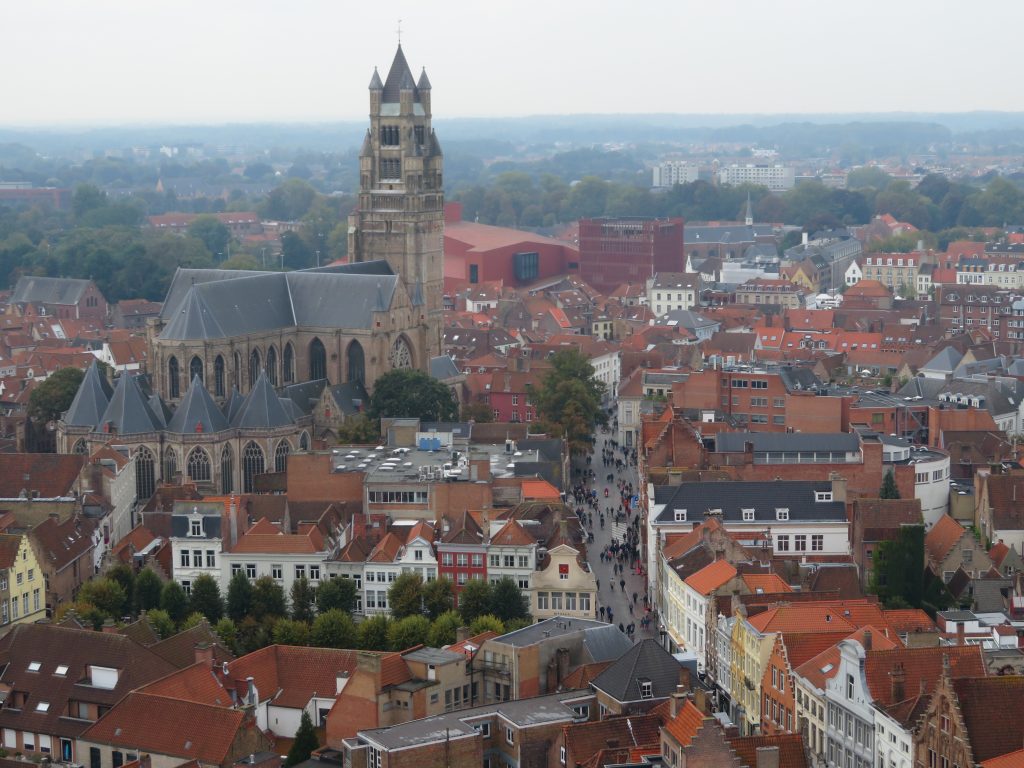 A better view over the square was from the viewpoint across the square at the Historium Bruges which had no queue at all! They don’t advertise that there is a viewpoint in that building very well, it was only when I was at the top of the Belfry and saw people on the balcony of that building that I knew there was a viewpoint there. 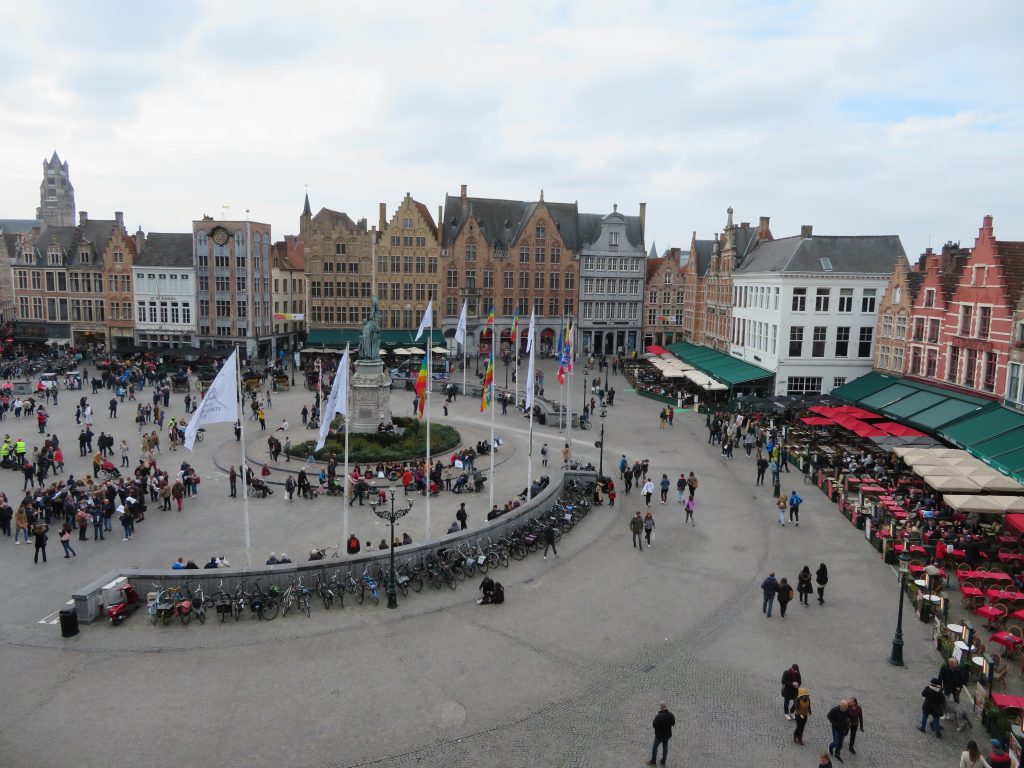 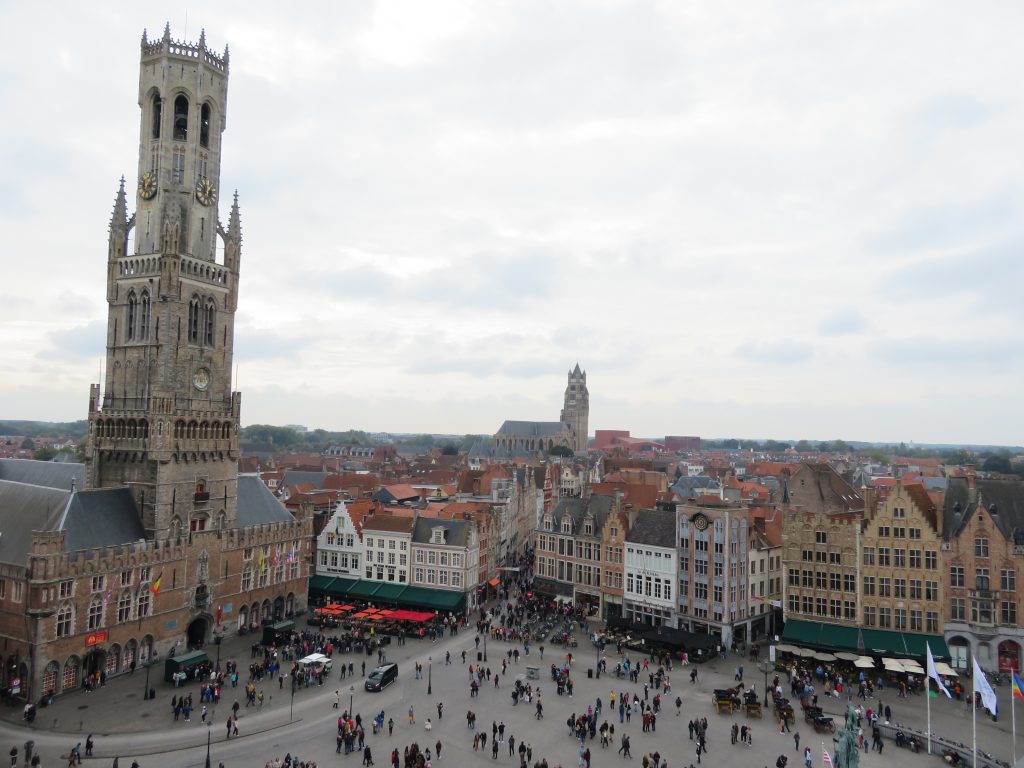 You can find this medieval looking facade near the Bonifacius Bridge near the Church of Our Lady Bruges. 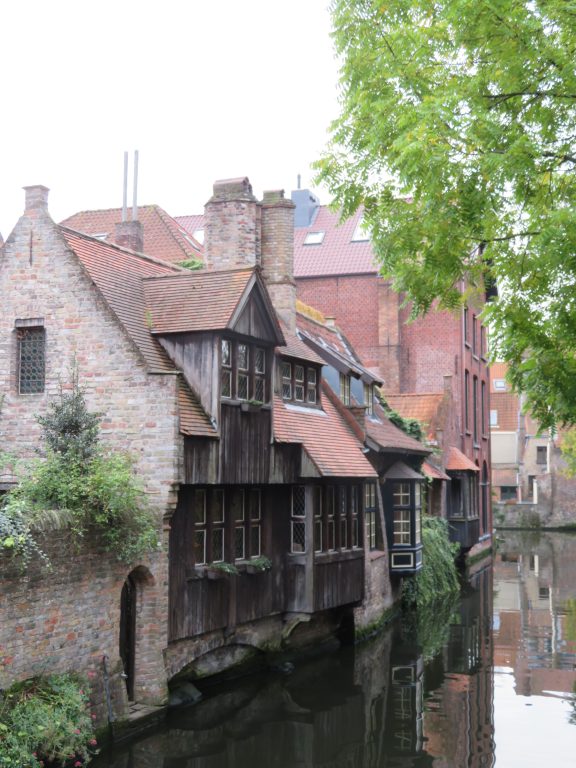 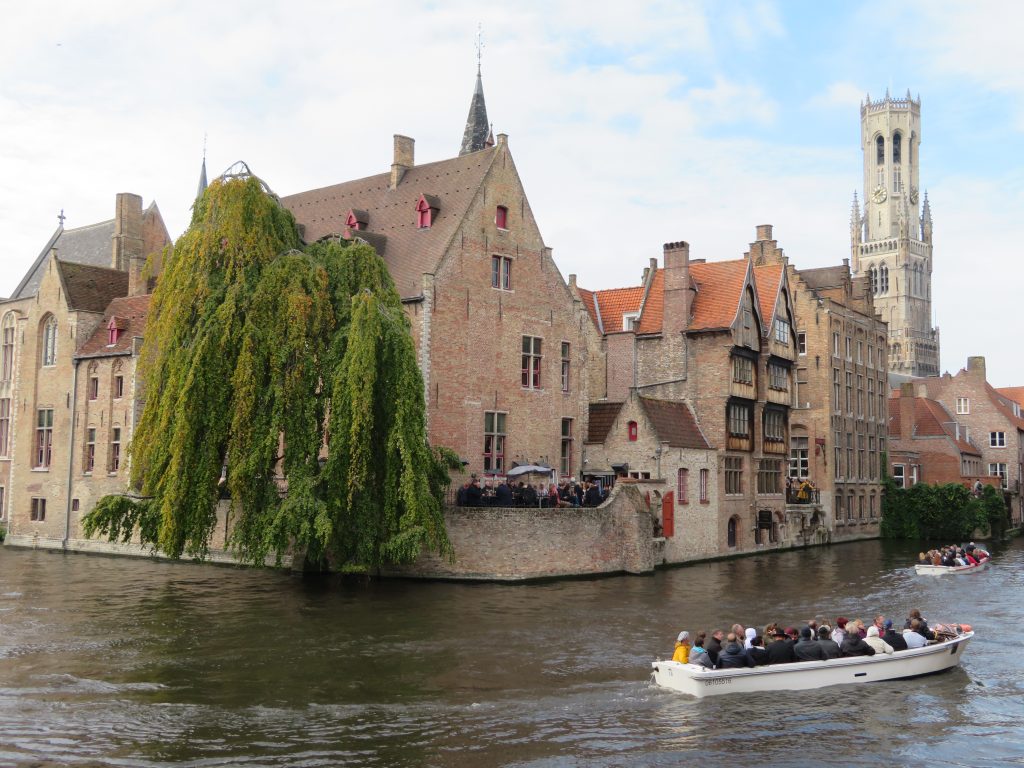 Continuing on from Rozenhoedkaai , Take a walk along the Groenerei (canal). 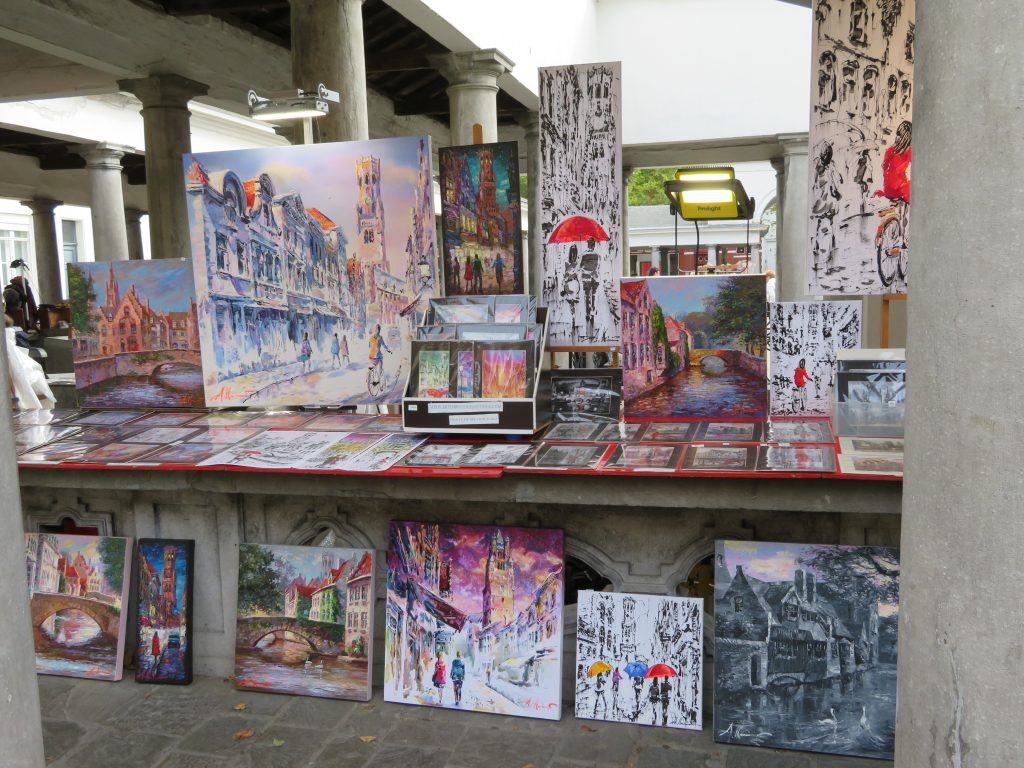 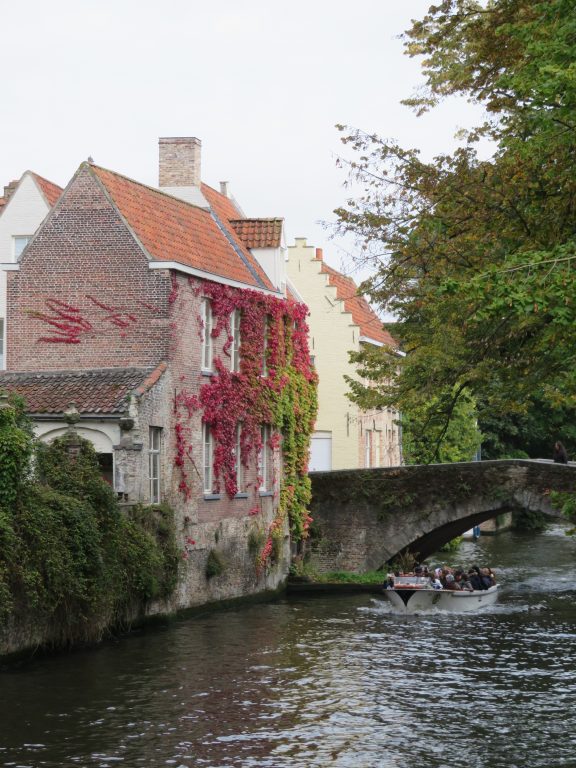 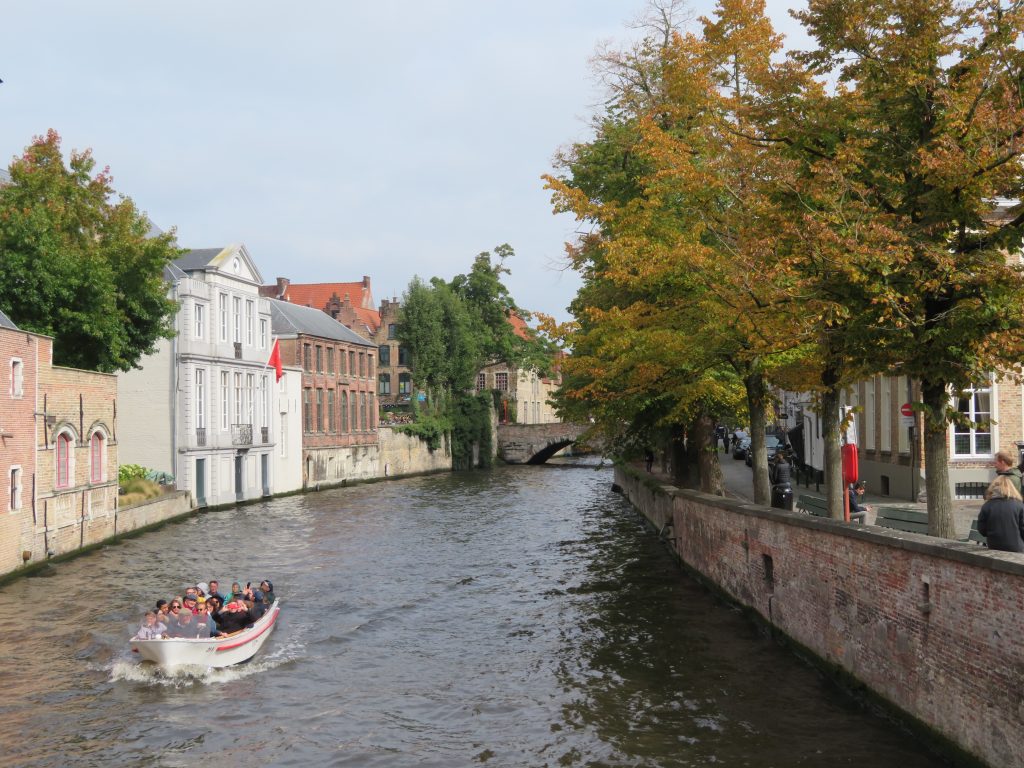 Some trees starting to turn.. 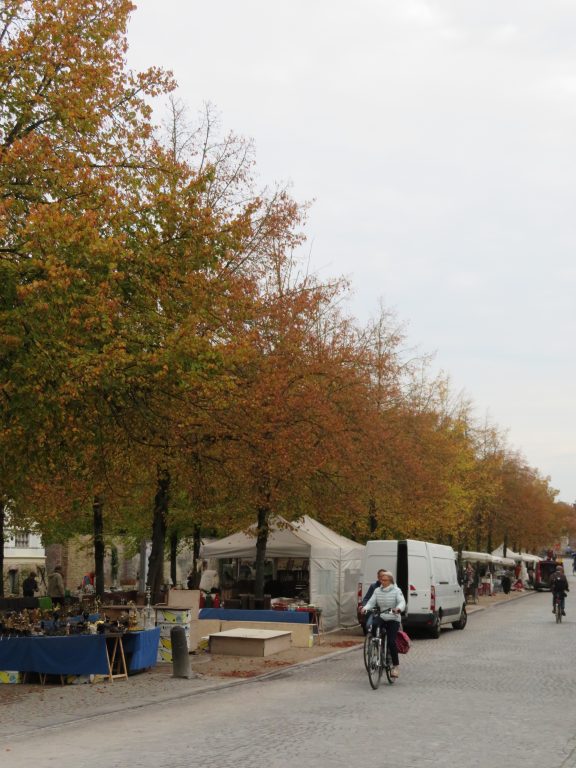 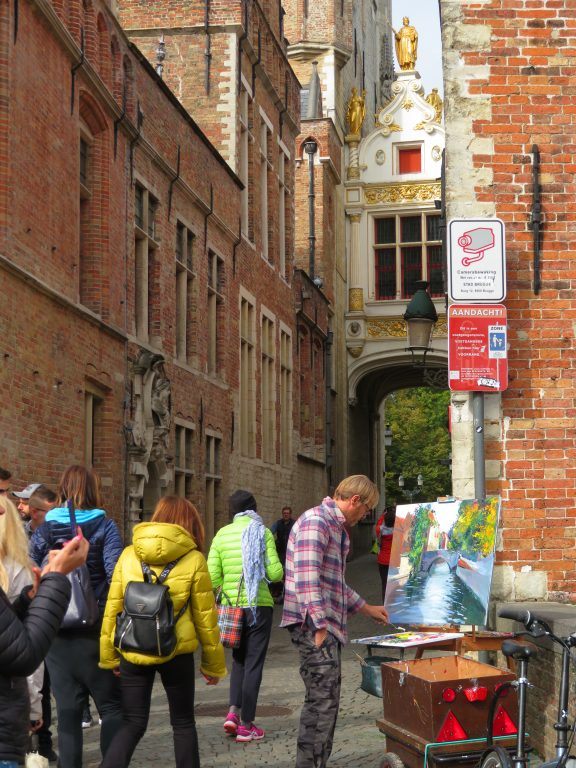 Can’t have a day in Belgium without some waffles! I tried Otto Waffles… and was very disappointed. The tasted weird, like a healthy low fat waffle. 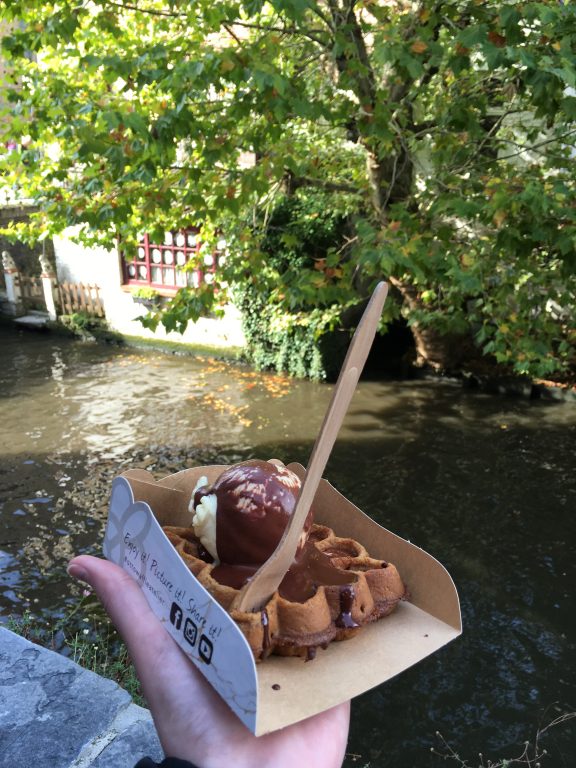 A popular chocolate shop that kept coming up when I was researching was Chocolatier Dumon however I found this overrated. The chocolate didn’t taste that great and it very expensive. The ice cream wasn’t very good either. 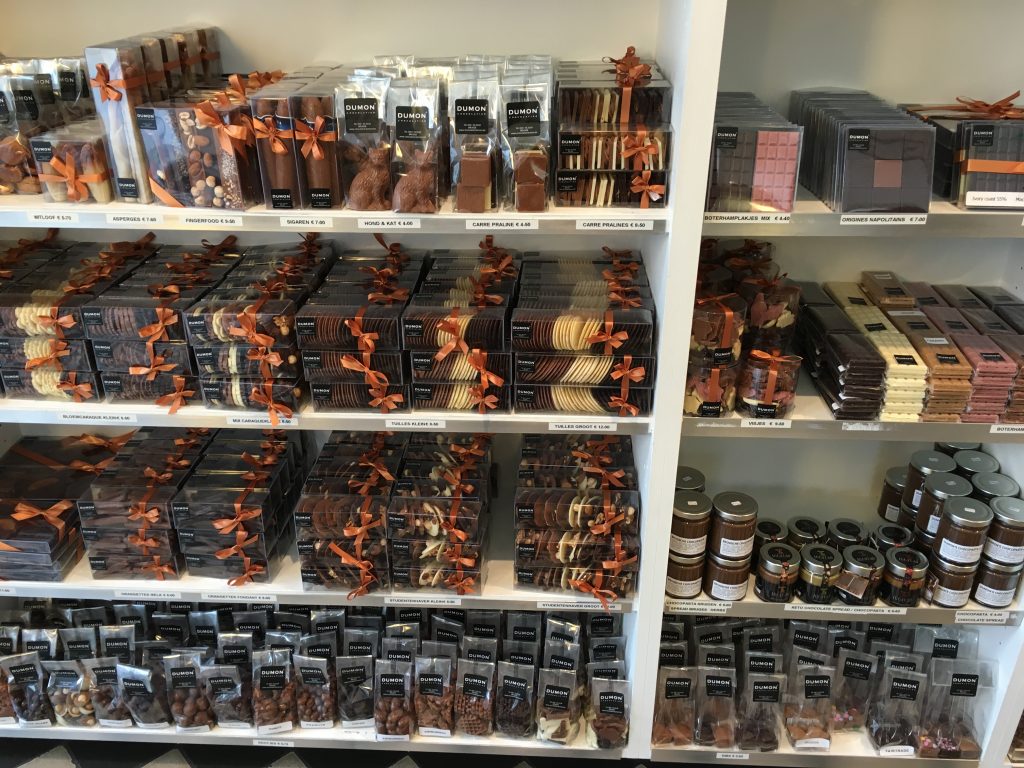 The best hot chocolate I’ve ever had in my life was at The Old Chocolate House. You can buy the chocolate melts if you want to make it at home. 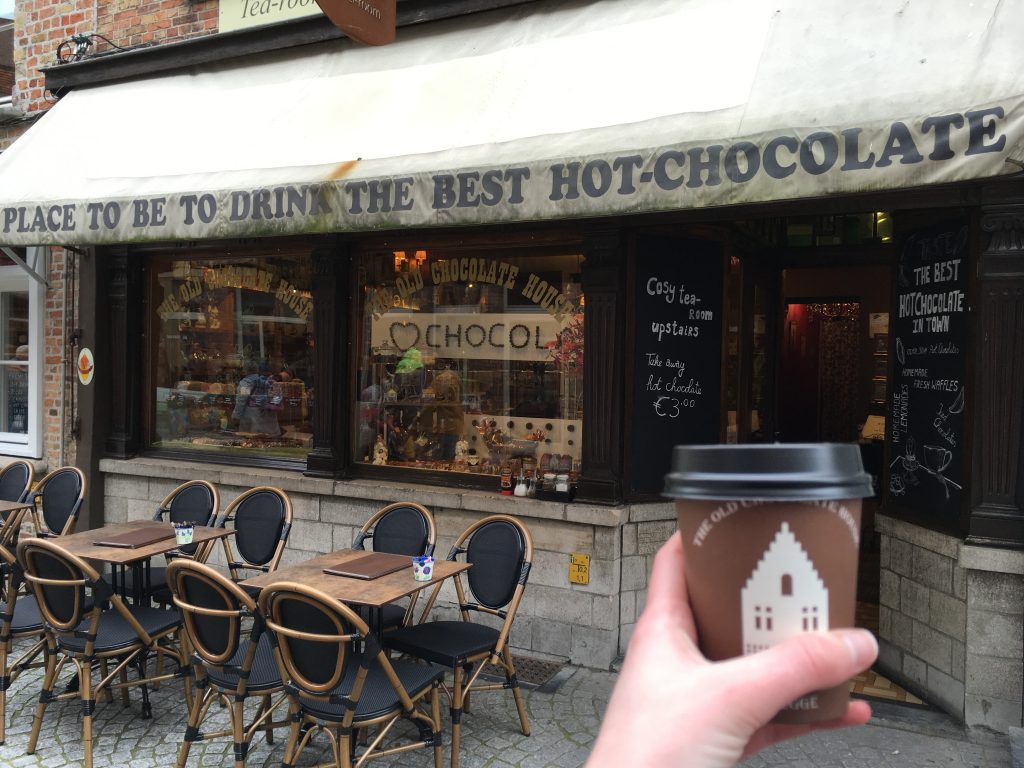 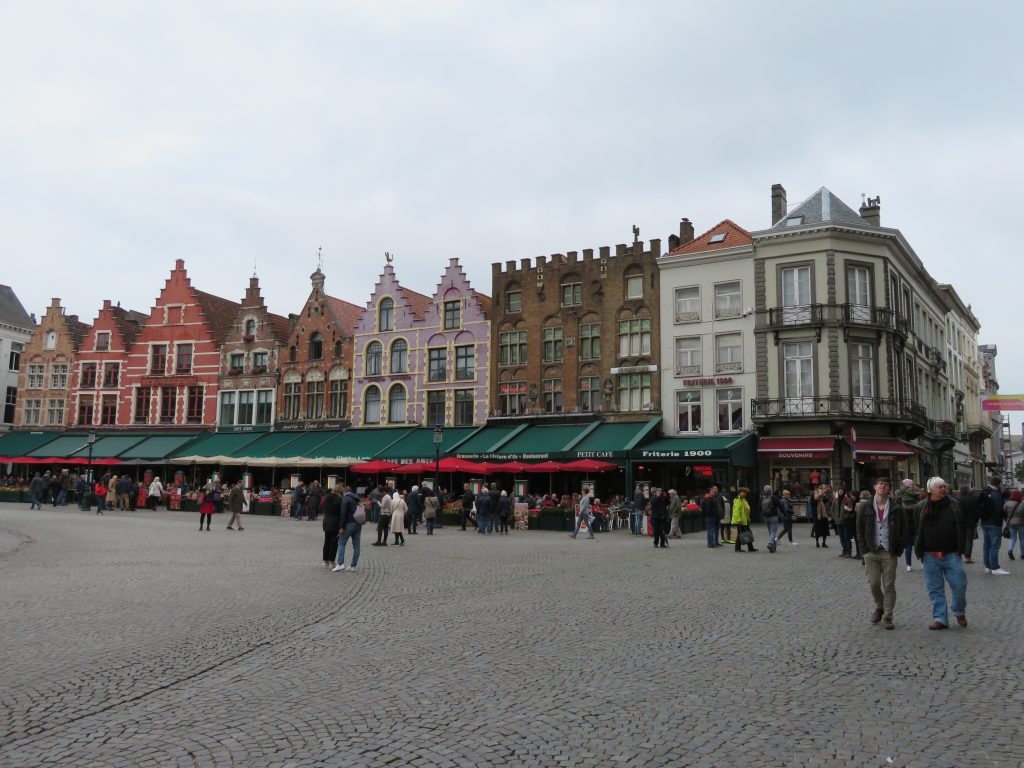 After about half an hour on the train train ride from Bruges you’ll arrive on the outskirts of Ghent. You can either pay a few euro to take the tram from the city centre to the train station, otherwise it’s a 30 minute walk.

I wasn’t as impressed with Ghent as Bruges. If I’d had more time I would’ve spent a half day but having spent more time in Bruges I had about 1/4 left of the day.  This was just enough time to take a leisurely walk along the river, walk around the main square and some of the side streets. 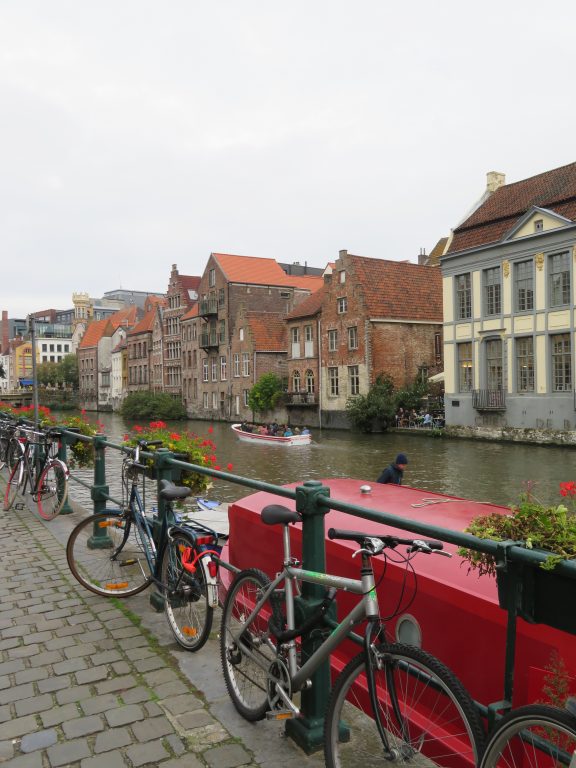 I wanted to go up the Belfry of Ghent viewpoint but it was packed and the wait time was at least half an hour so I skipped it. Cost is 8 euro and is open from 10am to 6pm. 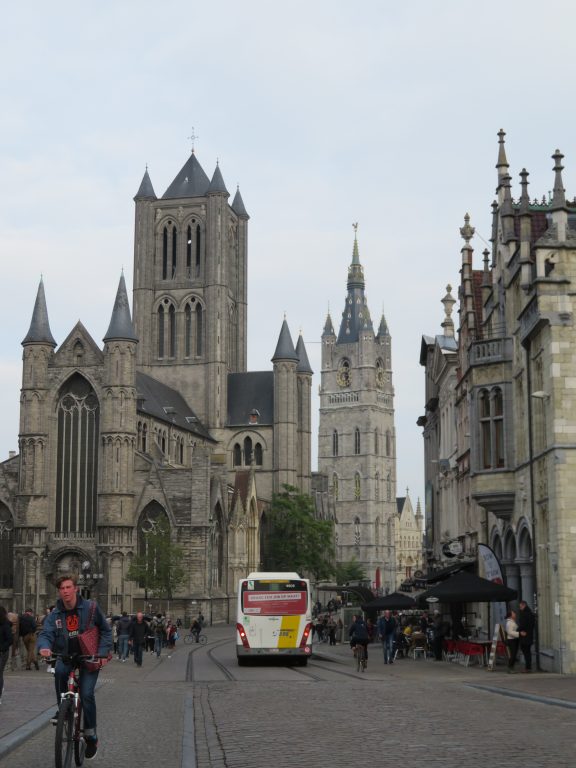 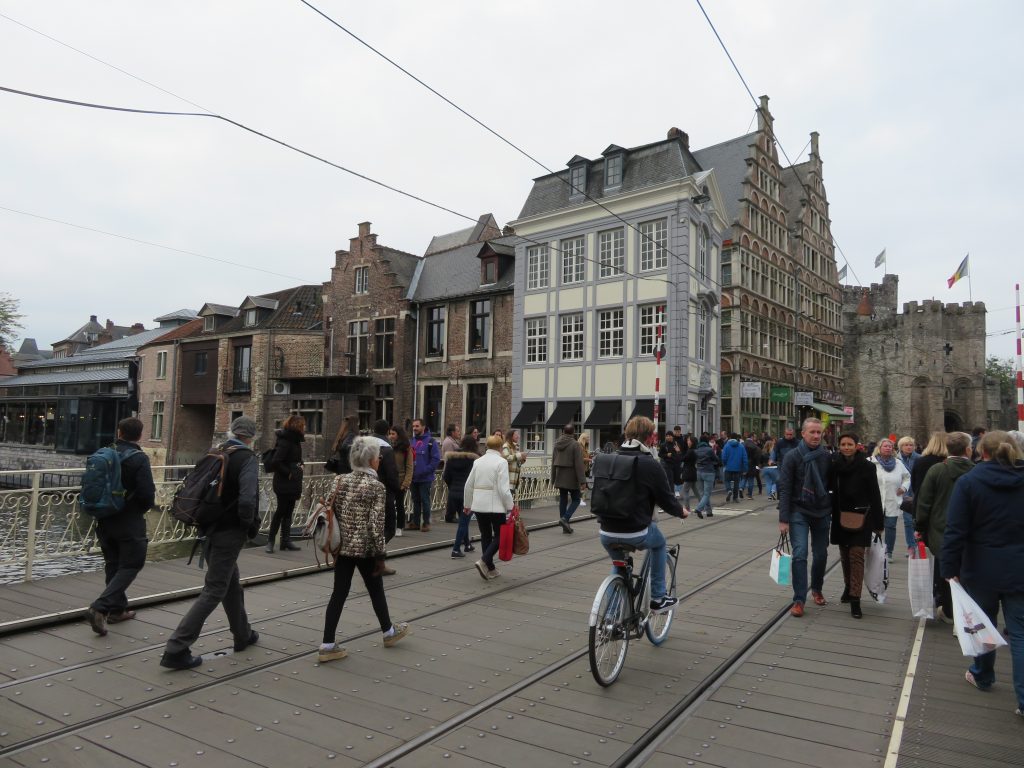 One of the most popular attractions is the Gravensteen (medieval castle). Open Sun – Sat 10am to 5pm, entry fee is 10 euro.

I don’t eat lollies but if you do, you can try a Cuberdon (usually have a raspberry flavour). My Mum (who I was travelling with) just wanted to try them but not buy heaps in case she didn’t like it. If you ask the stall holders they’ll sell you 1 individually… Expensive but good if you just want to try it. 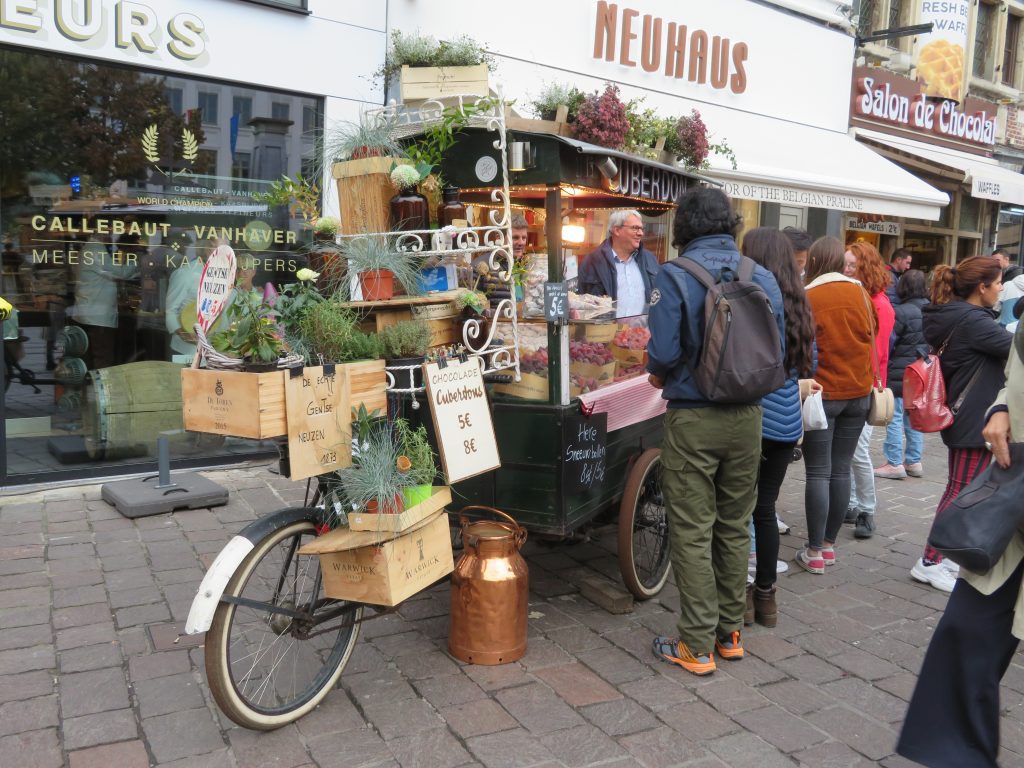 I’m normally all for the boat cruises but I skipped it this time for the same reasons as I skipped the Bruges canal cruise, I was short on time and I think the boats sit too low in the water.

Walk along the Korenlei, Graslei and St. Michael’s Bridge for pictures like this: 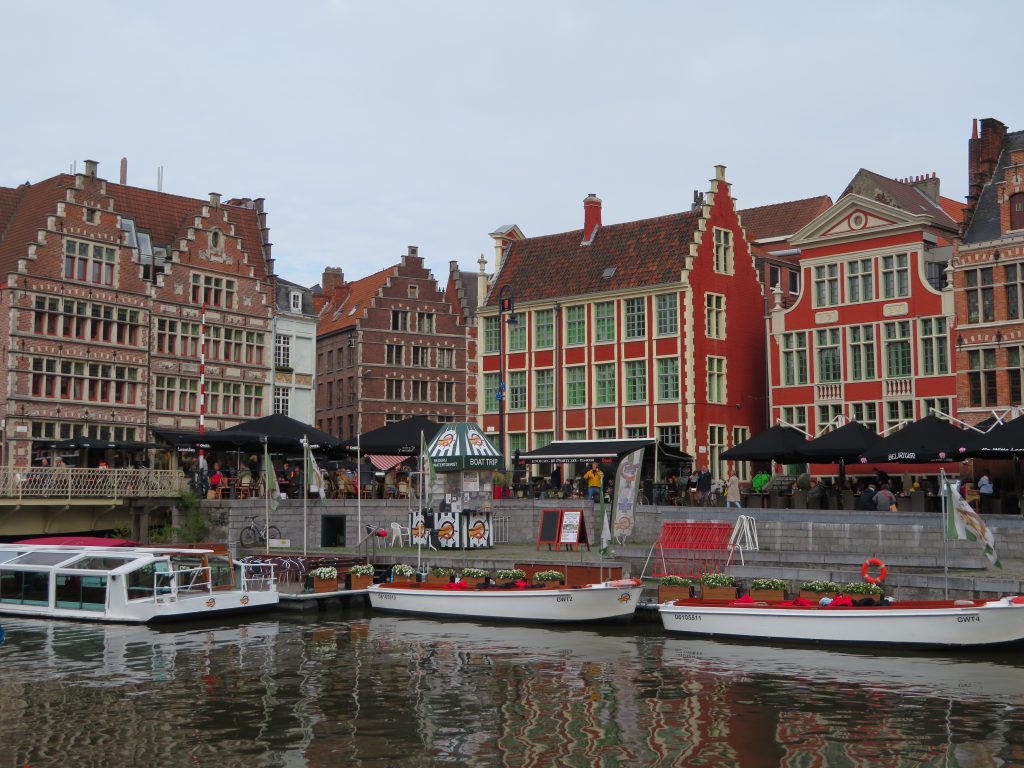 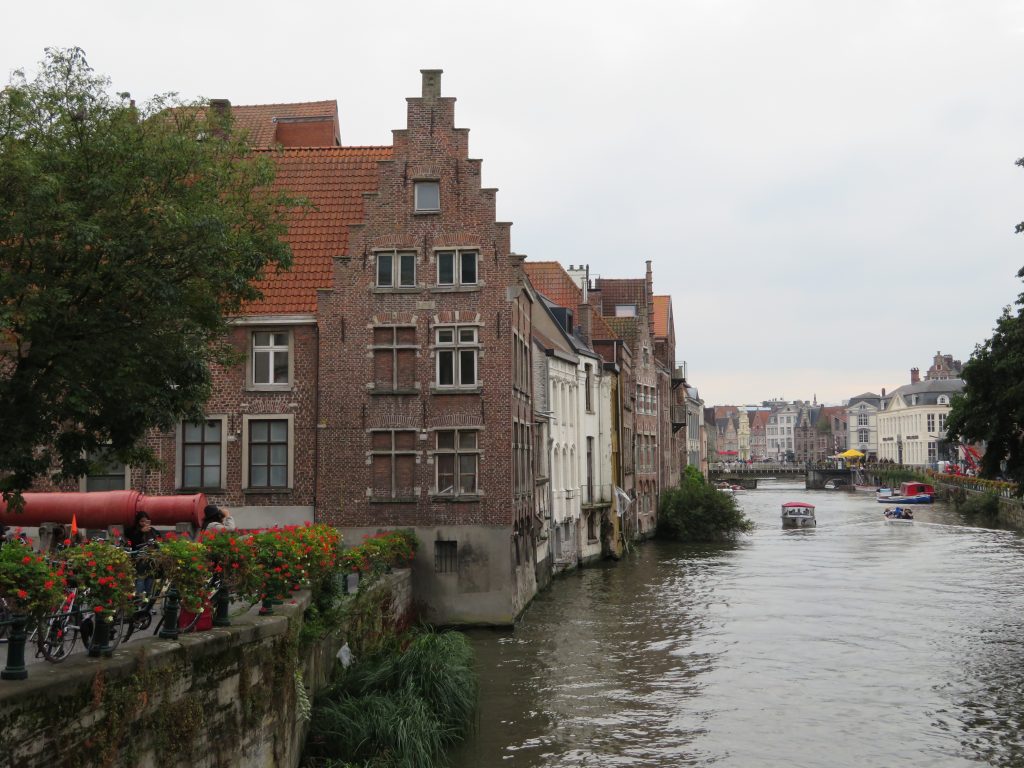 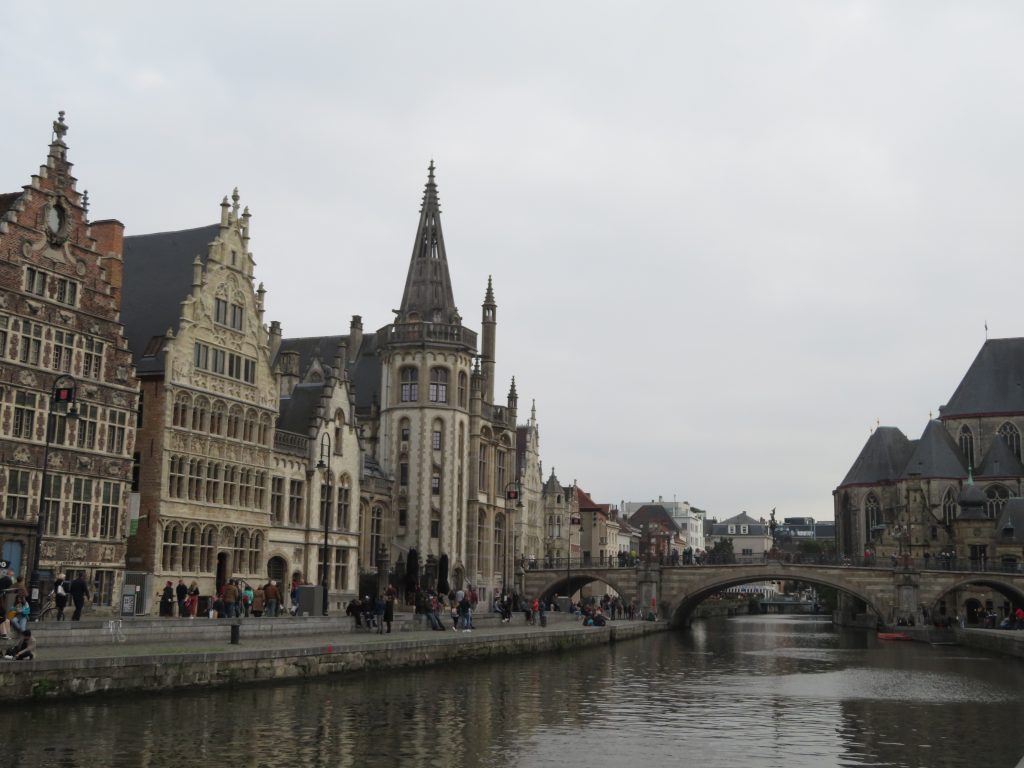 If you’re running out of time take the tram from the city centre to the train station, otherwise it’s a 30 minute walk.

Trains were leaving approx. every 20 minutes from Ghent to Brussels. 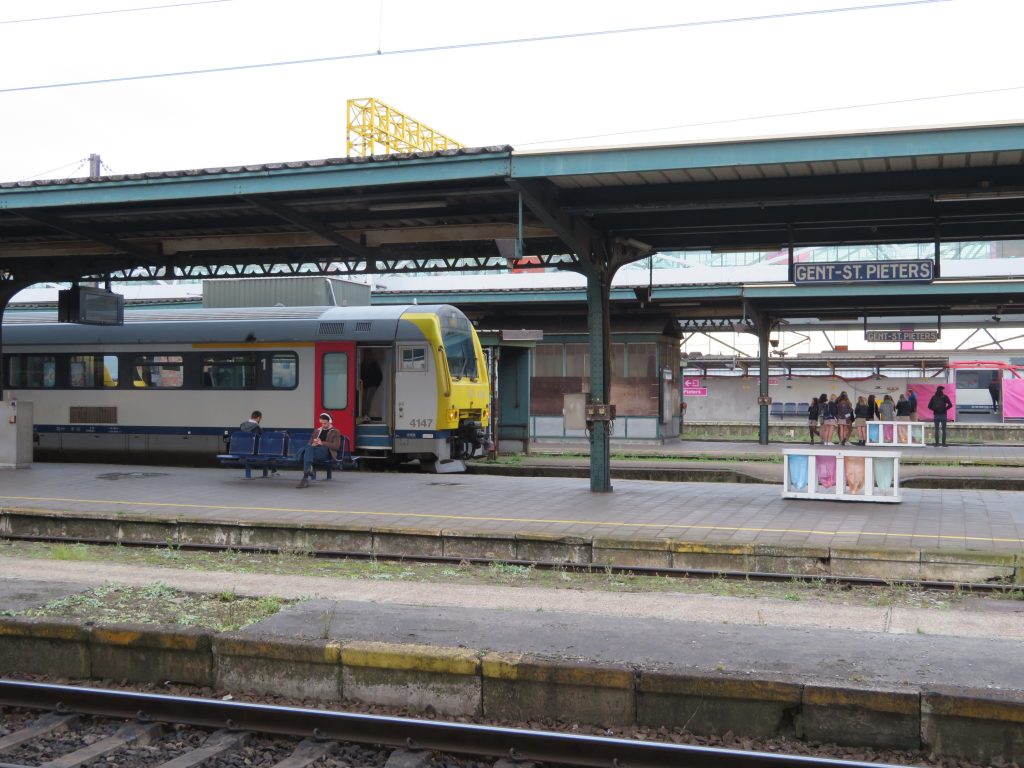 Would I go back to Bruges and Ghent?

I definitely want to go back to Bruges (at Christmas time). If I go to Belgium again I would base myself there for a day or 2 instead of Brussels.

Ghent was pretty but there didn’t seem to be much there so I’m not in a rush to go back.

Planning your next trip? Download my travel planning spreadsheets