I’m backkkkk! After 5 weeks in Europe and visiting as many stationery shops as I possibly could, I ended up with quite the haul… Let me show you what I found!

To enlarge the screen of the video, click the square icon in the bottom right hand corner of the video (it will say ‘full screen’ when you hover your mouse over the icon). 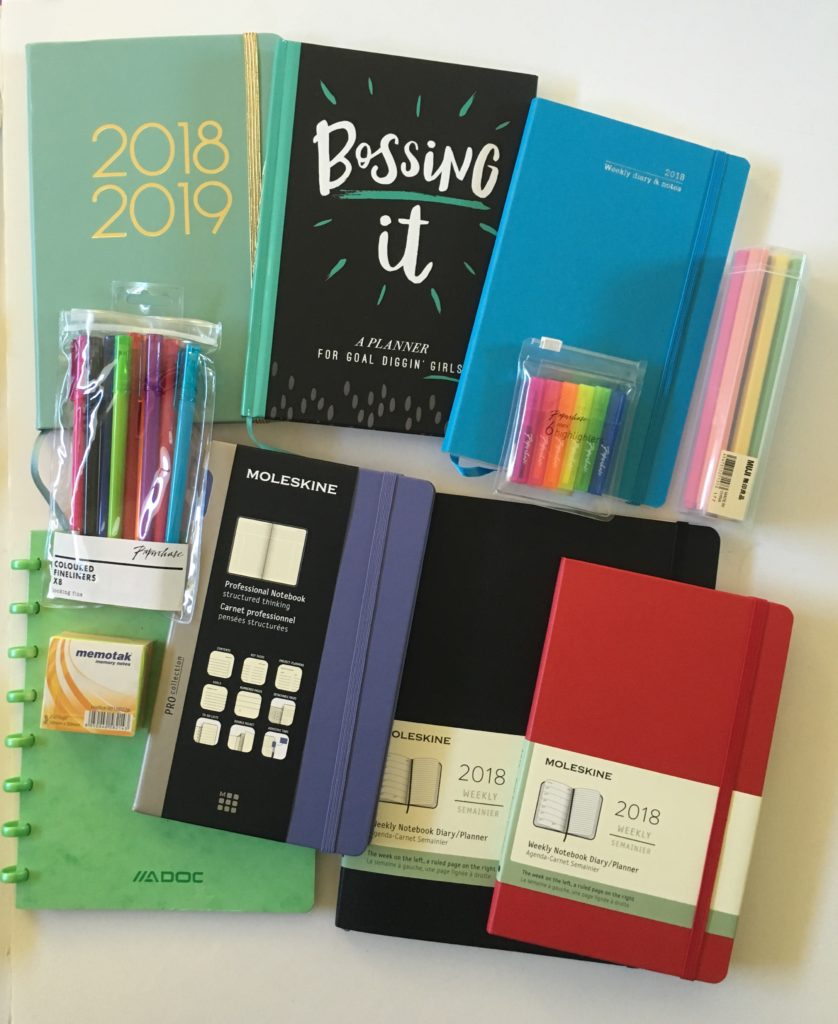 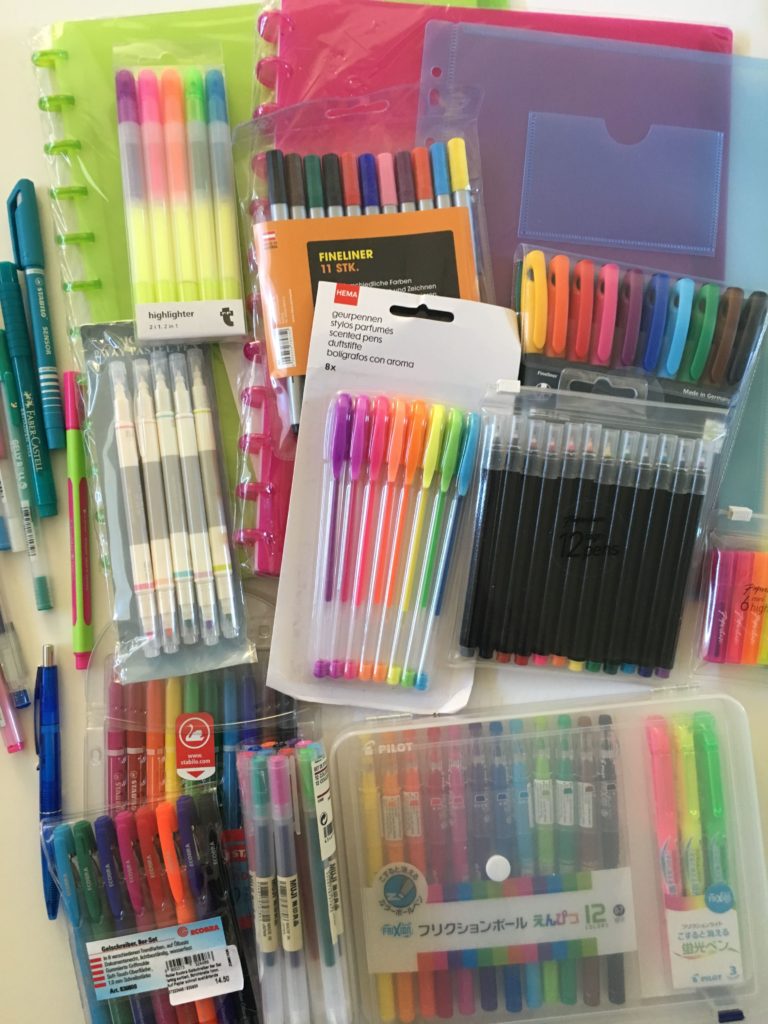 There are a few Paperchase’s in London including tube stations and along the Strand. The best one I found was in Euston Station waiting to board the Eurostar to Paris. The smaller shops didn’t have any planners but this one did! I couldn’t resist and purchased these 2 planners (reviews will be filmed and posted soon!) 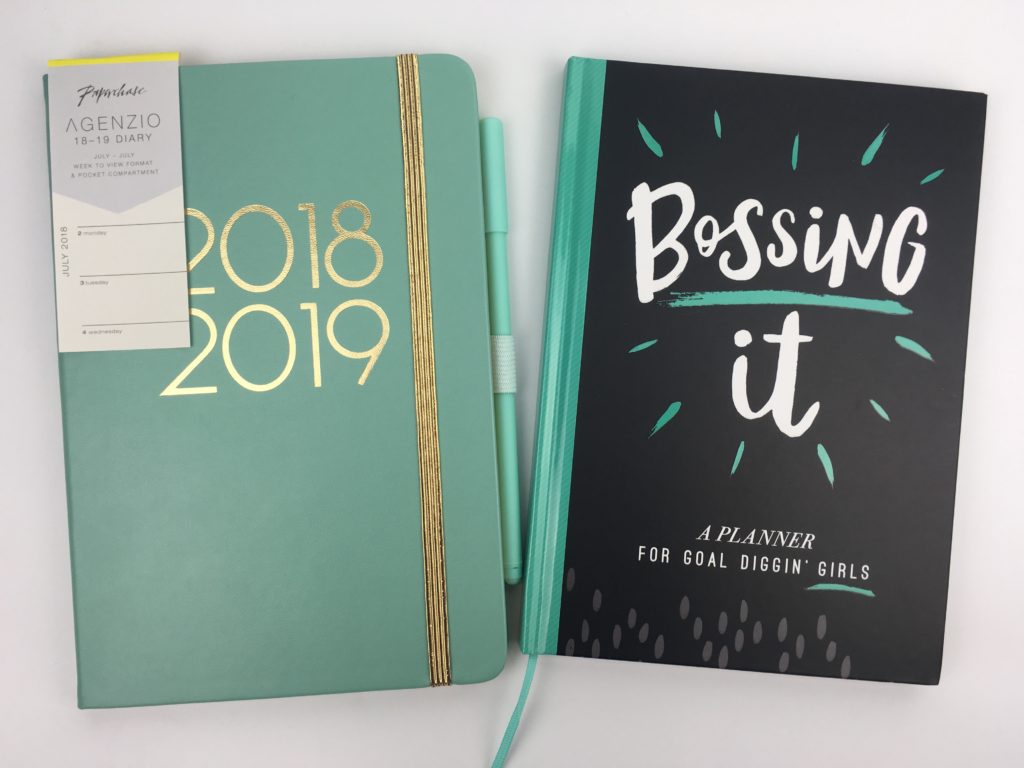 The mini highlighters are a bit awkward to use because they’re so well, mini. They’d be ideal for headings in your planner. 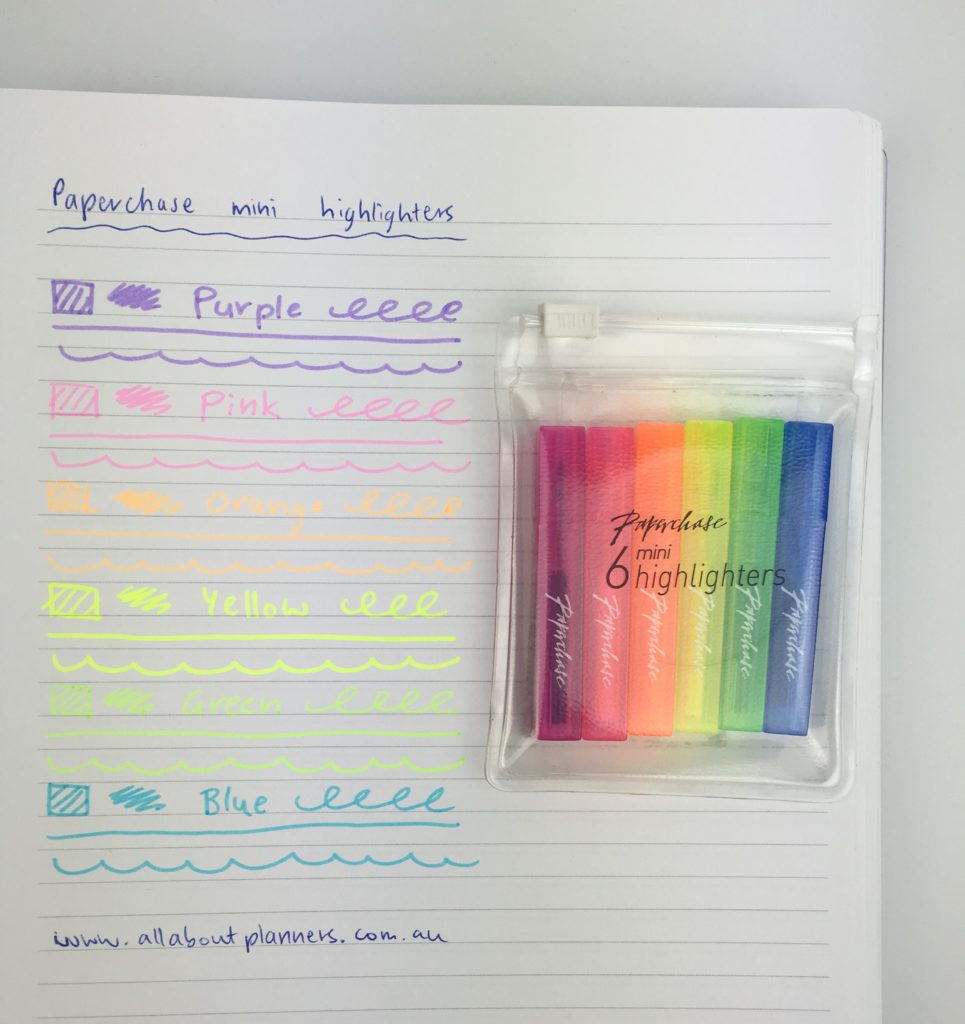 The sign pens write really nicely and were reasonably priced (only 6 pounds for the 12 pk). 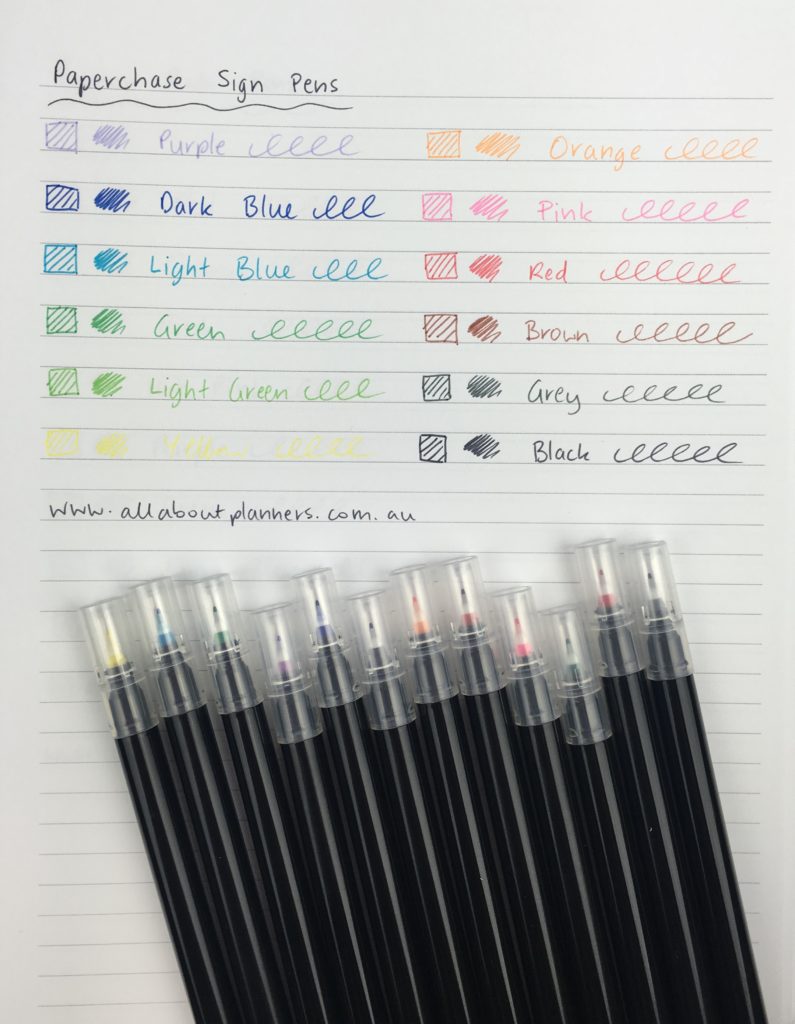 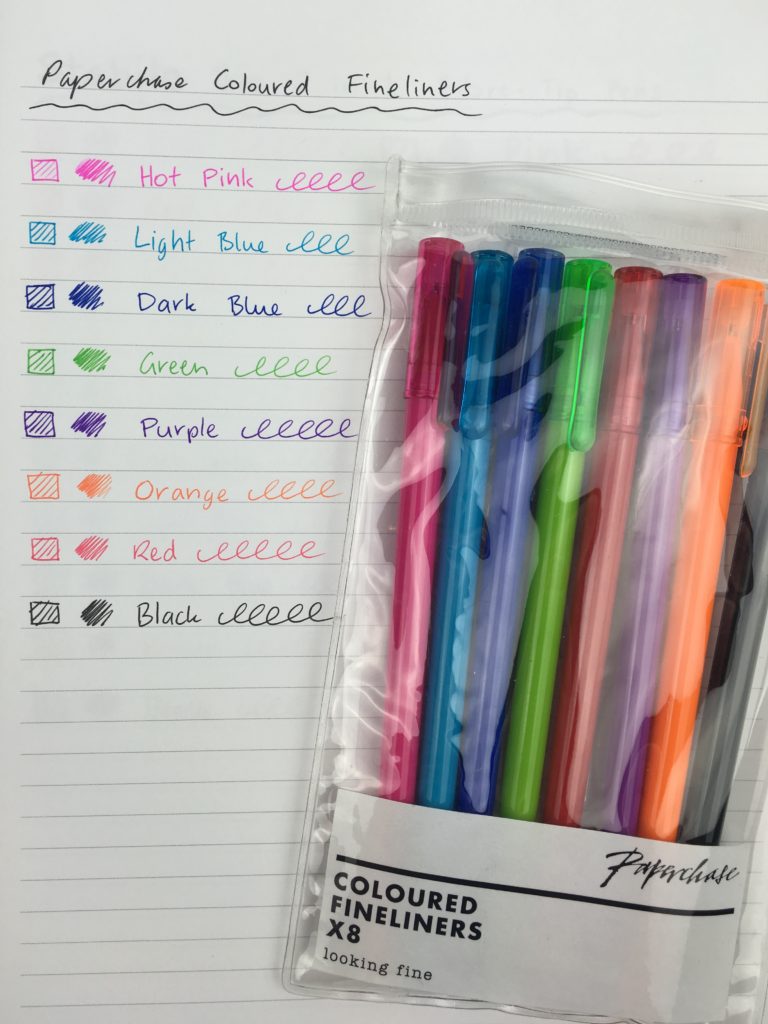 I found these cheap Rymans brand pens (they were only 2 pounds). They’re ok, the ink skips a bit, but for a couple of dollars it’s to be expected. 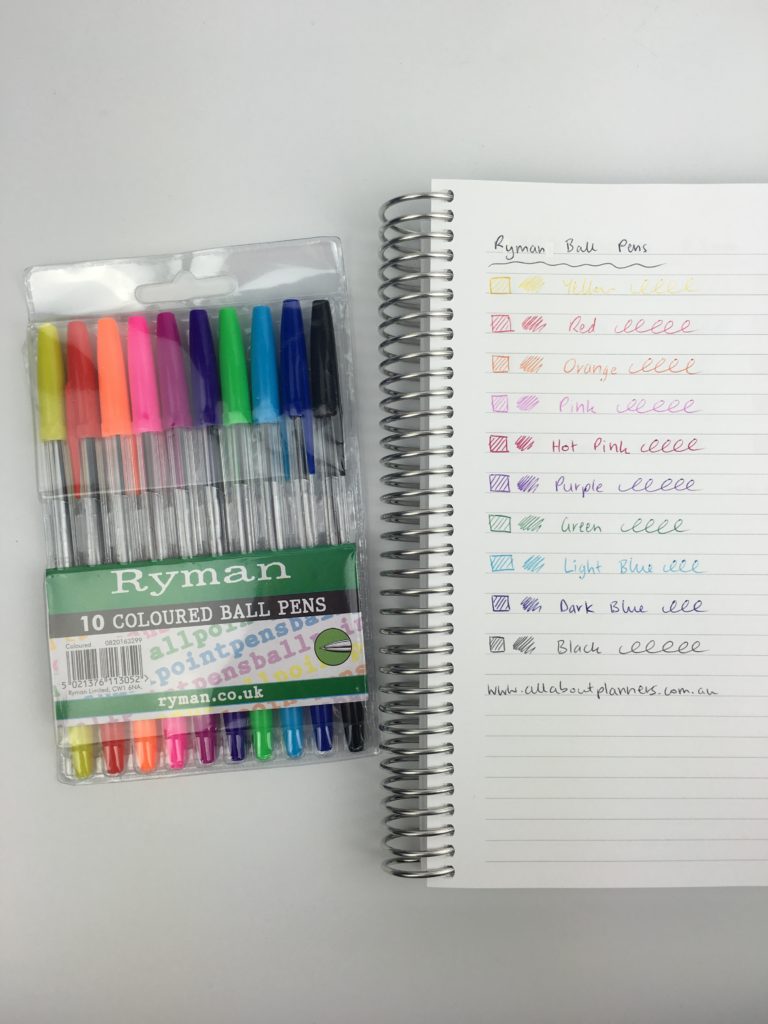 My new favorite pens! They write smoothly, the ink doesn’t skip, multiple shades of blue, green and pink AND there’s no yellow in the pack! <3 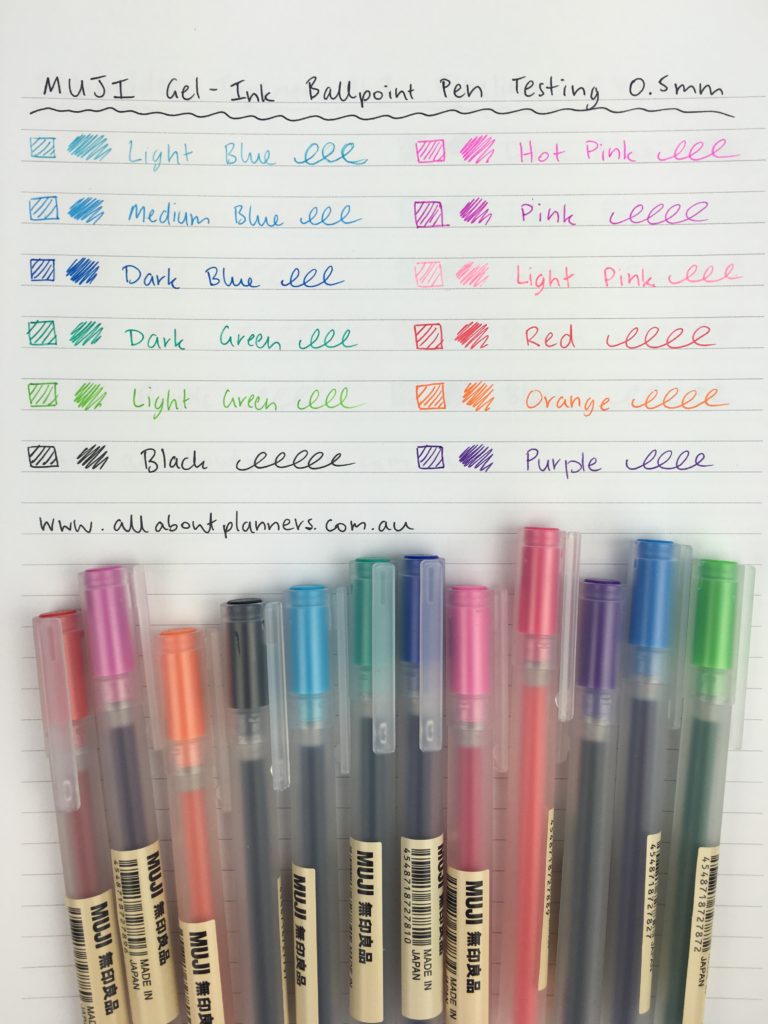 The Hexa pens are going to be great for headings. The colors are really nice plus you can actually see the yellow ink: 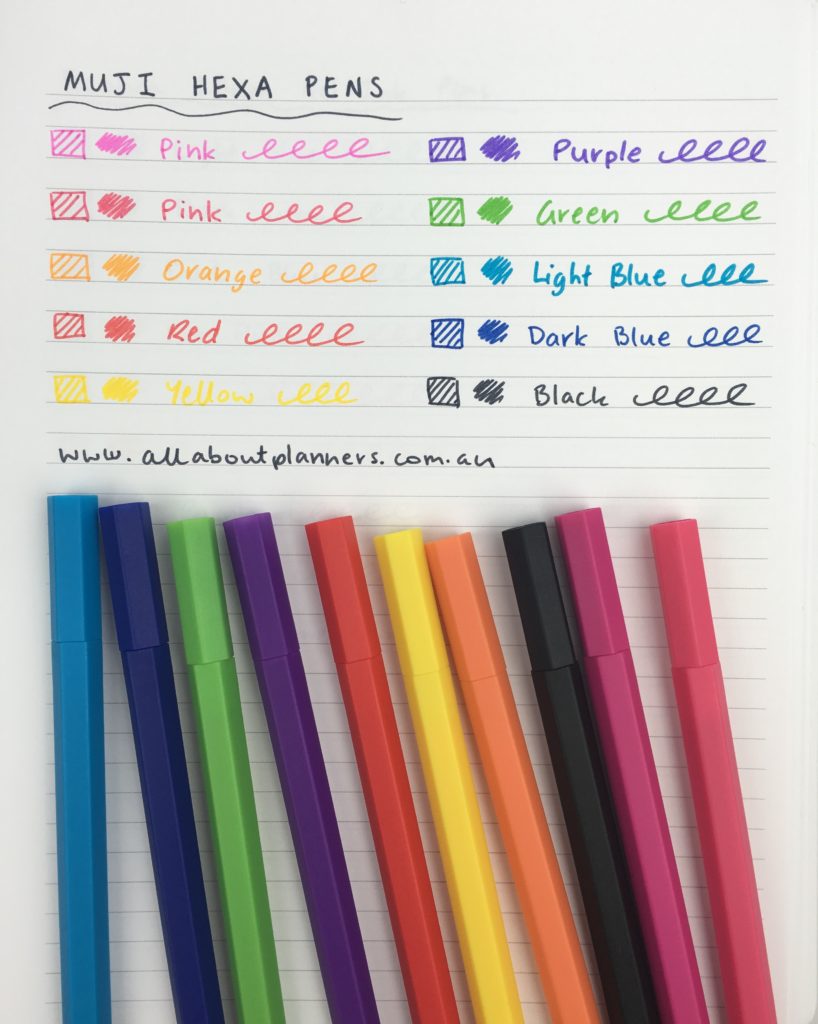 We stopped in at Liberties as my mum, being a patchwork quilter, wanted to see Liberty fabric. I was pleasantly surprised when I found a stationery section in the shop and even moreso when I found these highlighters!

However, when I did a pen test after I got back I was a bit disappointed. The blue / teal is really pretty but the green not so much and the purple is too pastel for my liking.

This store was in London and a few other places around Europe – especially Rome.

These 2 in 1 highlighters were only a couple of dollars, the ink is bright and the tip is small so you could use them as a pen for headings. 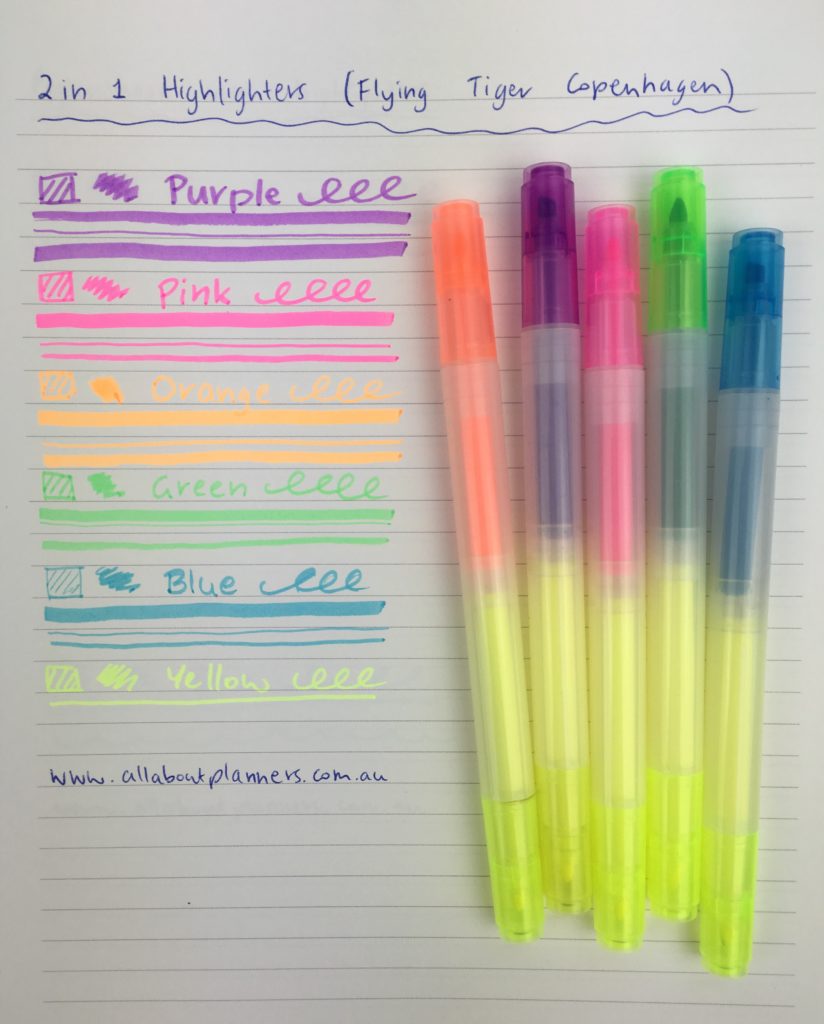 This shop had a bit of this and that. These rainbow scented pens were cheap so I wasn’t expecting much. They smear a bit and are too neon for my liking. 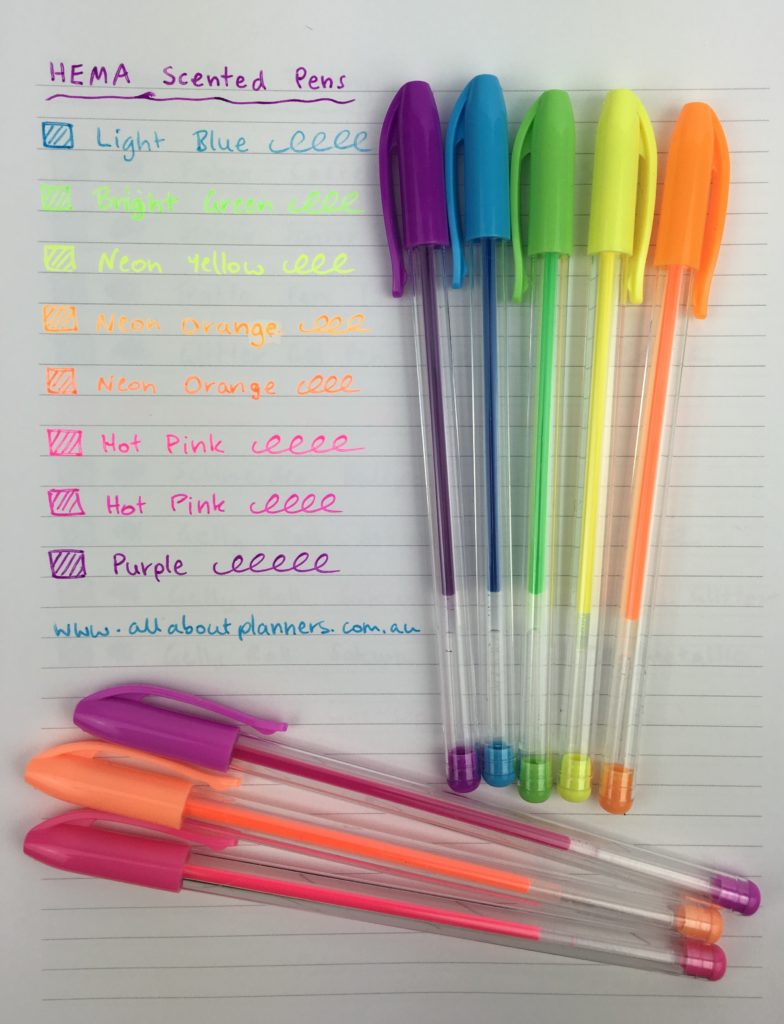 I found this shop in Salzburg, Austria. It had a bunch of this and that including a decent stationery section where I found these pens:

I wasn’t expecting much since they were cheap but they actually write really nice. 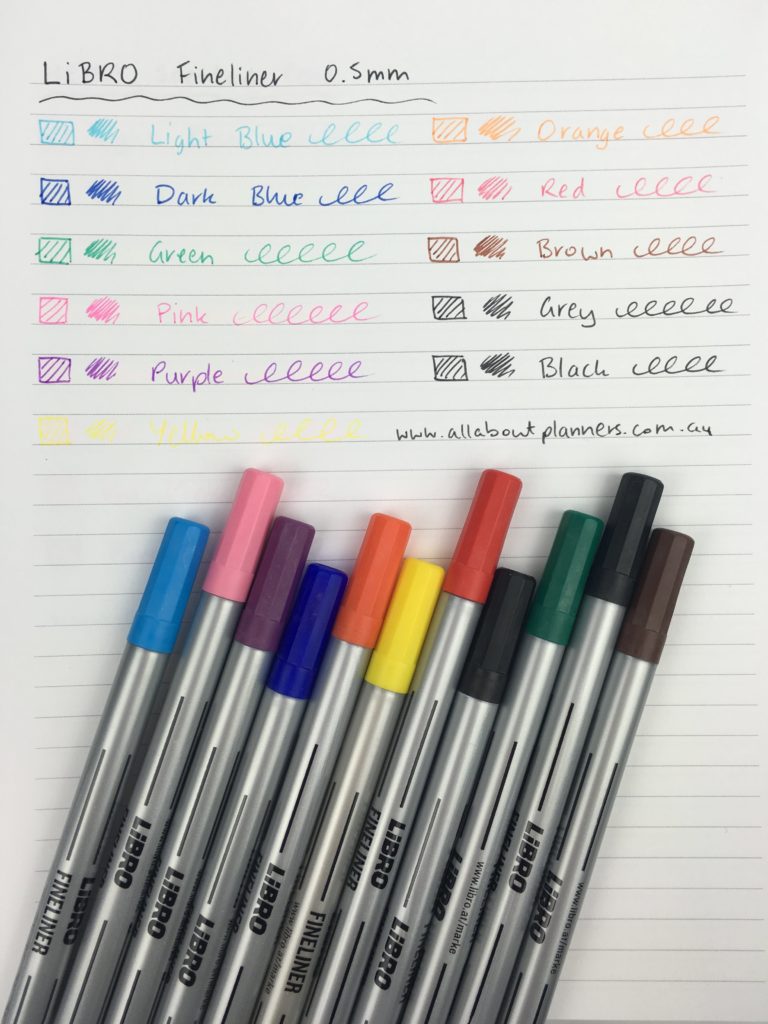 This shop was a bookstore with a small stationery section. They had plenty of moleskin and I picked up this 2018 diary (review post and video coming soon!) 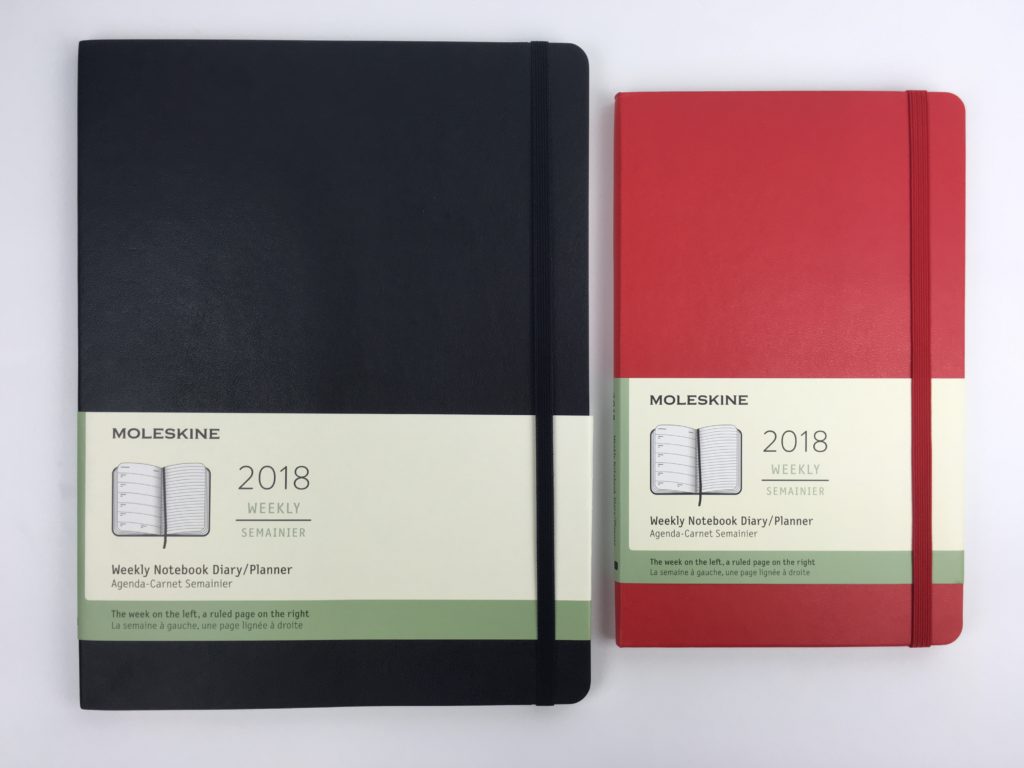 At a hole in the wall random assortment of things shop in Sorrento I found a memo cube for 1 euro. I’m not holding out much hope that they’ll stay sticky for long but the pack had different colors and came in 2 x 2″ size (my fav. size for sticky notes).

This store had the best stationery & giftware department!

After seeing the Sakura Gelly Roll pens everywhere and so many people raving about them I had high expectations. Which were met. These pens come in so many colors and styles including glitter and neon. They were are bit on the pricey side and since I’d already bought quite a bit of stationery I resisted… this time. If I find the rainbow pack of them again I’m definitely getting them.

Globus had the German brand, Edding. There were brush pens in plenty of colors but since I hadn’t heard of them and there was no tester paper, nor were they available to purchase individually, I opted to skip them. This time… 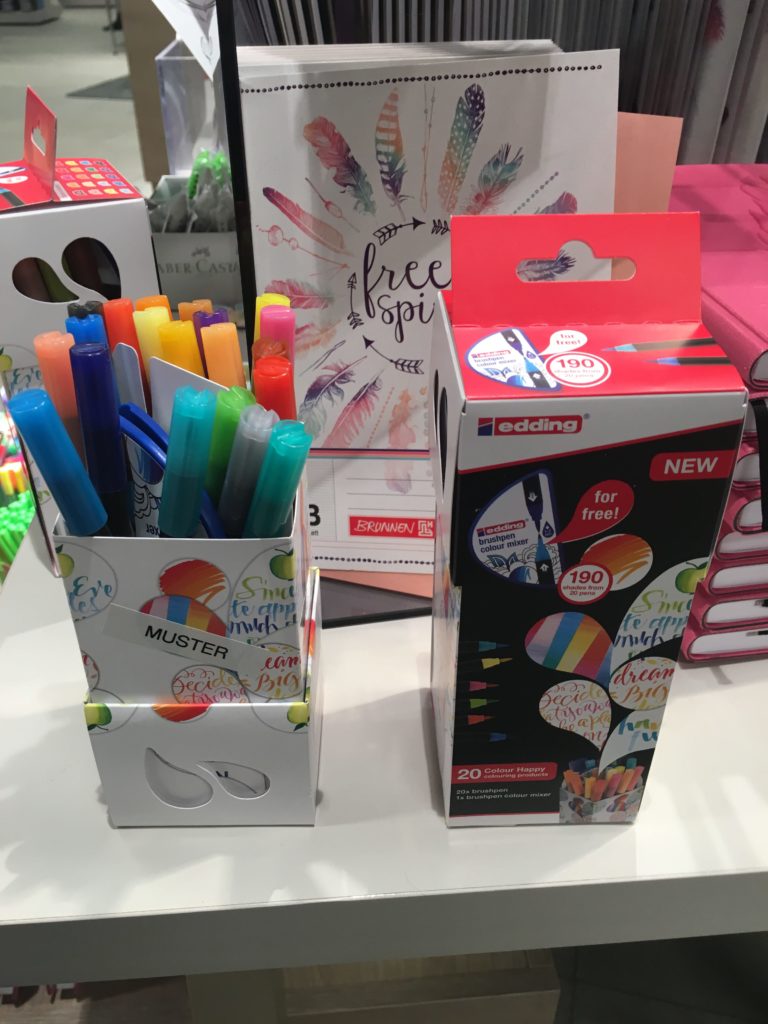 I did find a marker style pen from the same brand in silver and gold. The gold looked too much copper and not enough gold so I opted for the silver instead (bottom swatch in the photo below). Keen to try the silver against black cardstock – would make a cute DIY planner cover in various patterns – polka dots, stripes, chevrons… The first thing I noticed when I found the stationery department at Manor? The rainbow wall <3 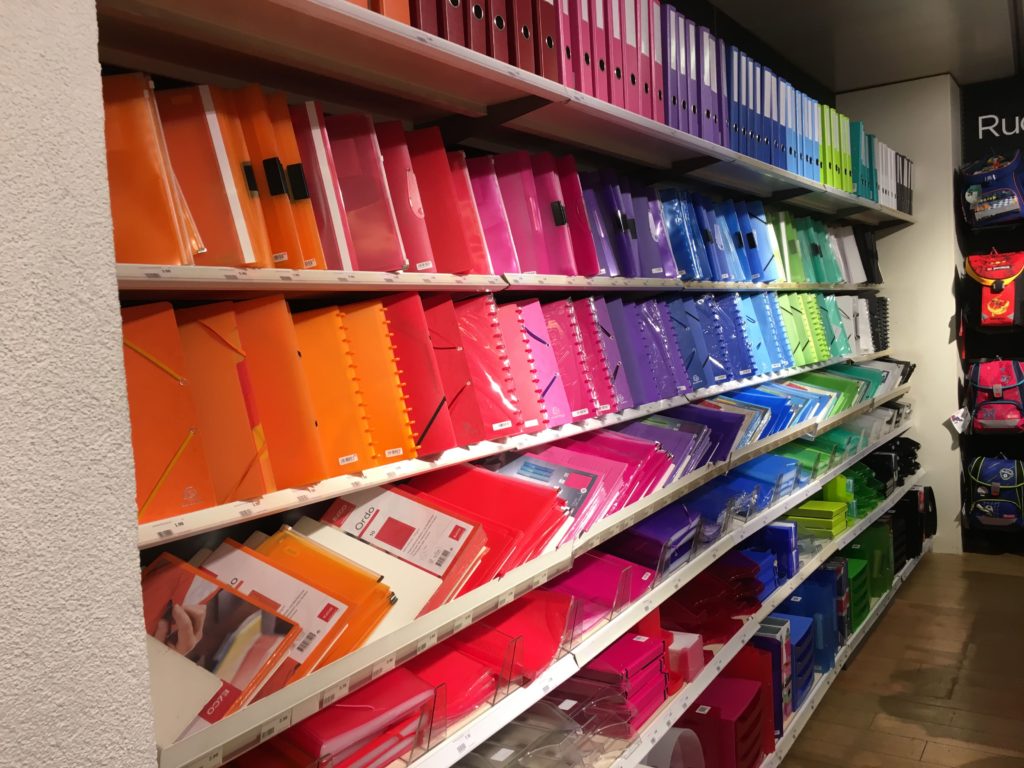 Manor is where I found the folders and plastic sleeve at the top of the photo below. The folders are like the Arc system (discbound). There were so many colors to choose from if I wasn’t limited by suitcase space I would’ve bought them all!

I really liked Migros – lots of swiss chocolate and the one in Zermatt had a stationery section downstairs where I found these pens: 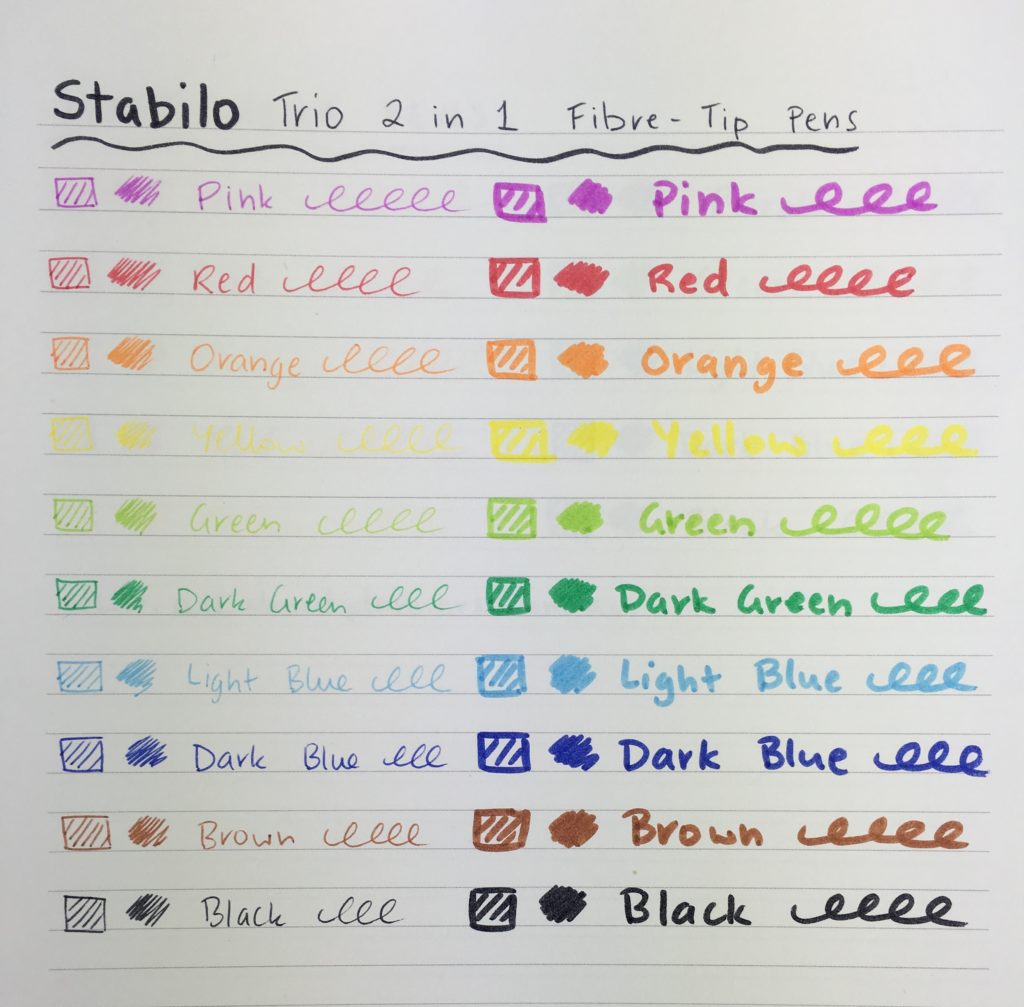 Also known as my new favorite pens for headings. Plus the thin tip end writes nicely too! <3 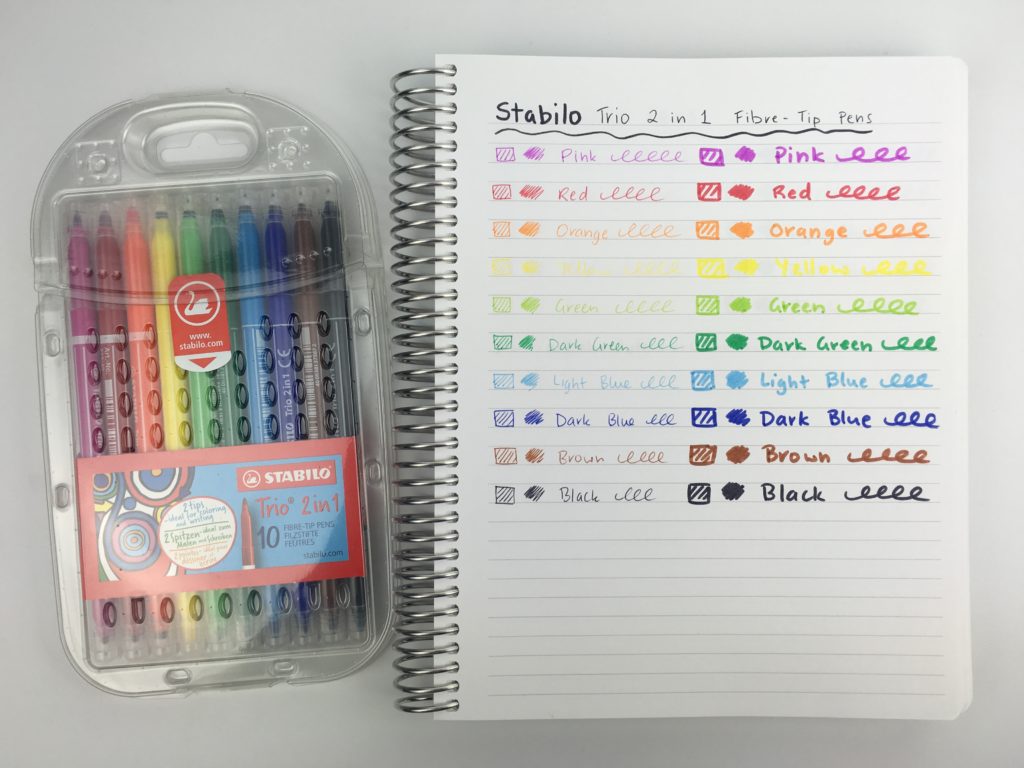 I found quite a few pens at this shop (which was my favorite stationery shop on the entire trip!)

These pens were around 15 CHF (approx 30 AUD). For that price I expected these to be really good quality. I was a bit disappointed, there’s nothing really special about them. I wouldn’t recommend these pens – there are plenty of cheaper brands that work just as good (if not better). These pens were a bit pricey but worth it – they write really nice – although I wish the yellow was easier to read. On a layover in Singapore I found these pens in WH Smith.

You guys know I love Frixion pens and even though I already have plenty, I really wanted these as they have the eraser on the end of the pen lid not the pen itself. So when you’re writing you can put the lid on the end of the pen – with the other Frixion ones the lid always goes missing, rolls onto the floor etc.

Moreover, this set comes in so many pretty colors 🙂 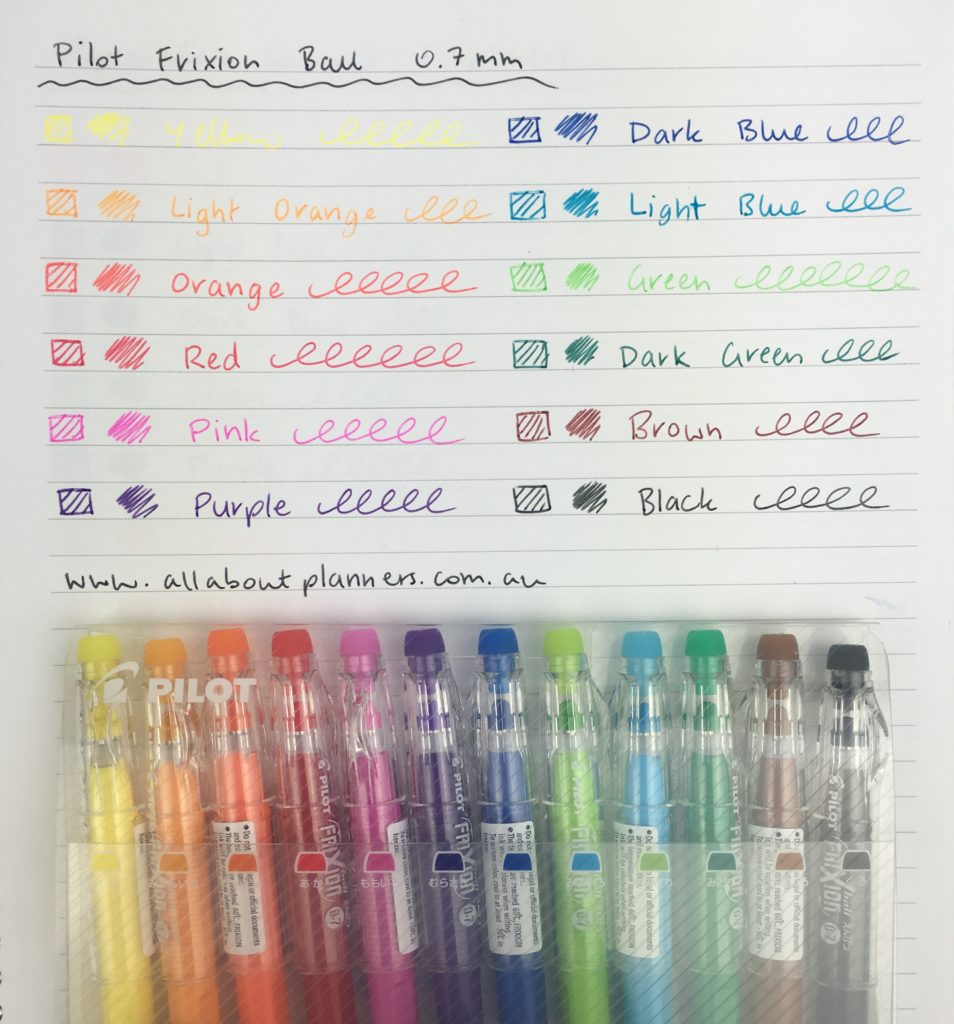 So that’s a sneak peak at my Europe stationery haul! I’ll be doing reviews / videos for the planners in upcoming posts. Make sure you subscribe (if you haven’t already) if you want to be notified when those posts are published.