If you’re venturing down to Italy’s Amalfi coast there’s one place you cannot miss – the Isle of Capri! 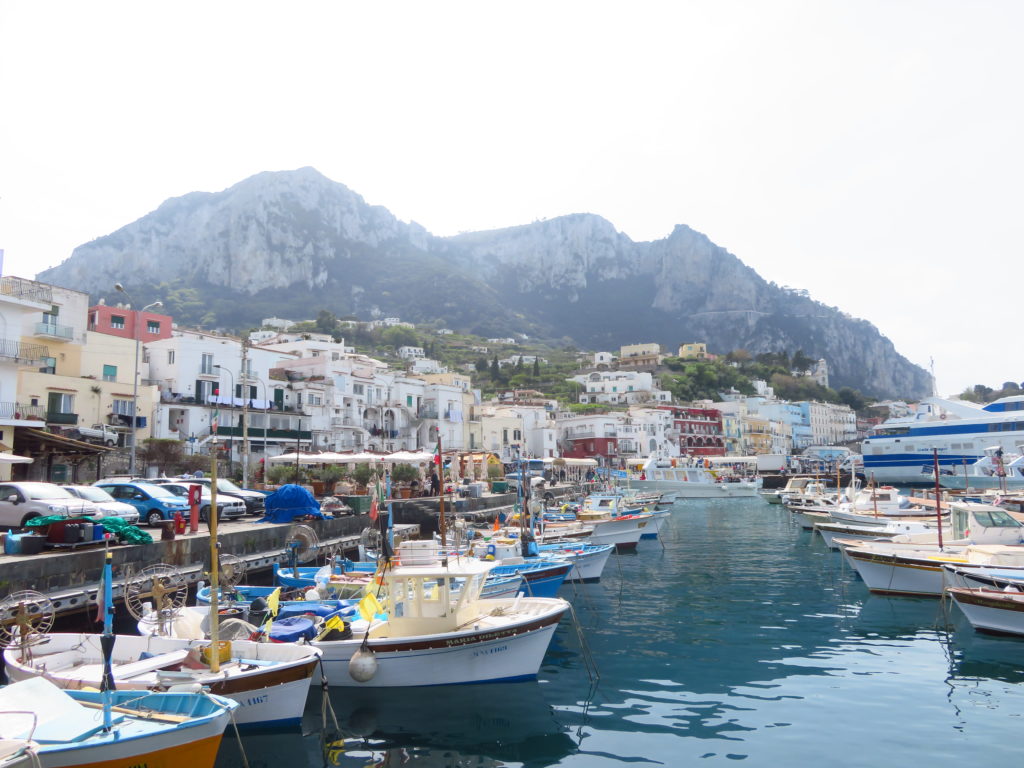 Things to see and do

Boat ride around the island

This would be my #1 recommendation. Take a relaxing boat ride where you go around the entire island, underneath that famous archway between the rock and take some great pictures of the Marina Grande. 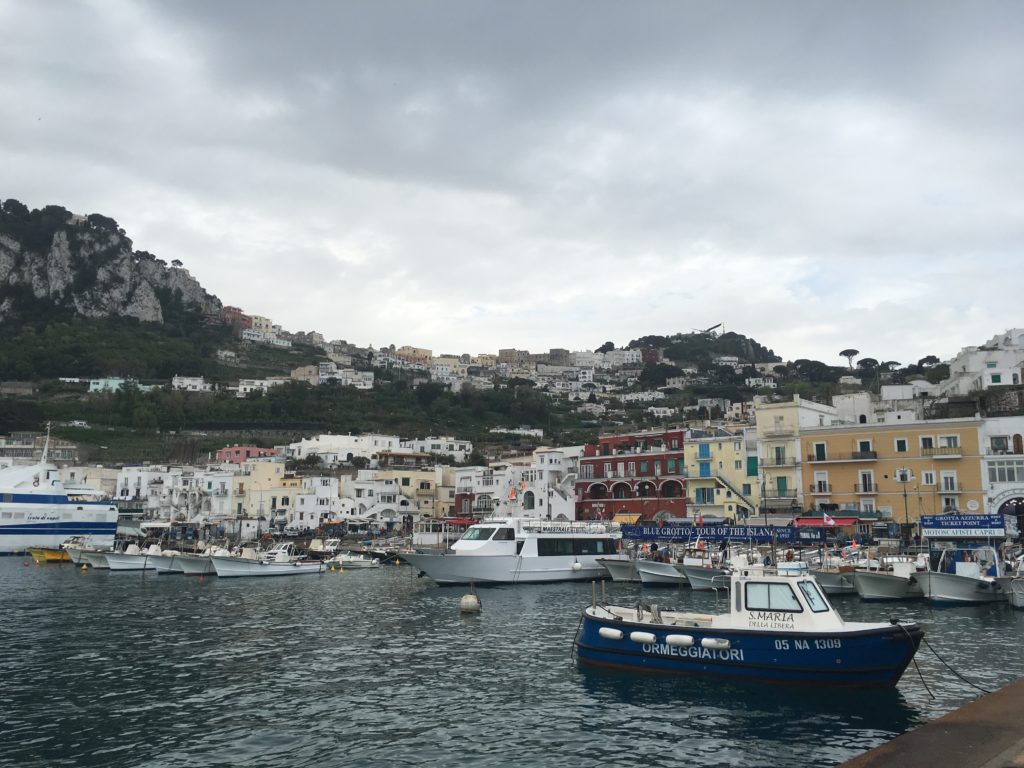 When I saw the chairlift I immediately questioned Italy’s safety standards. The only thing stopping you from falling about 20m to the steep hillside below you, is a thin metal bar that doesn’t actually lock into anything. But if you can avoid thinking about it, it’s definitely worth doing – the views are spectacular – especially on the way back down! 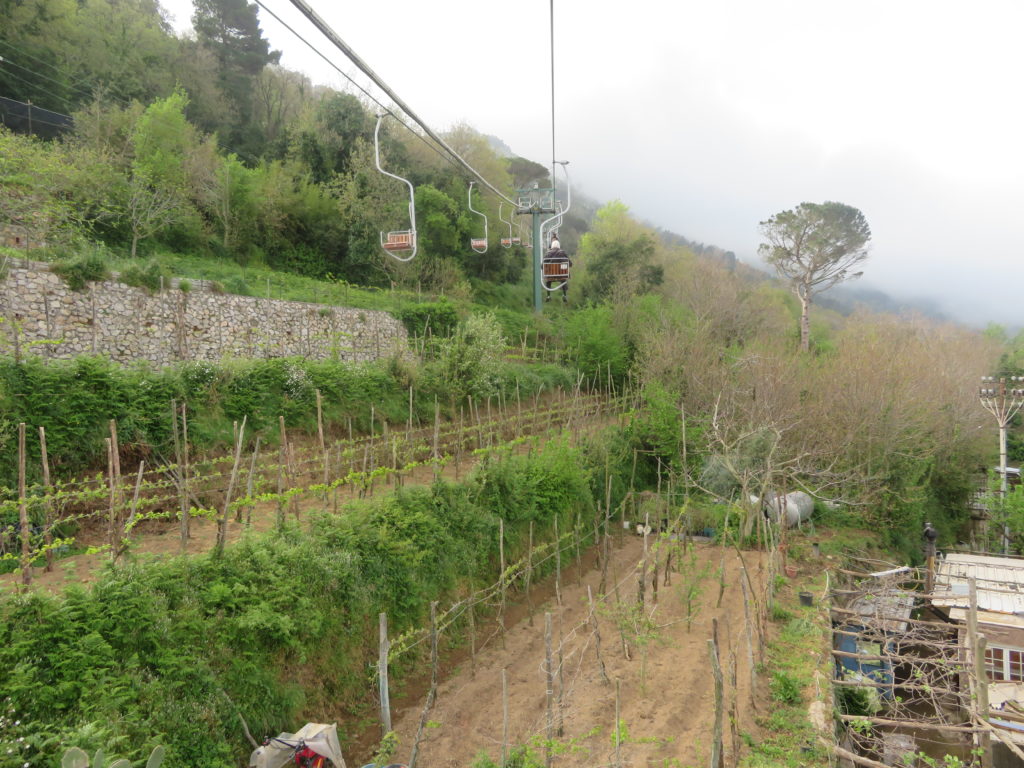 Just don’t bother doing the chairlift if it’s foggy. I was on an organized tour where the chairlift was included in the price and at a fixed time so figured we may as well. About halfway up it was so foggy I couldn’t even see the person on the chairlift in front of me and once you got to the top you couldn’t see a thing: 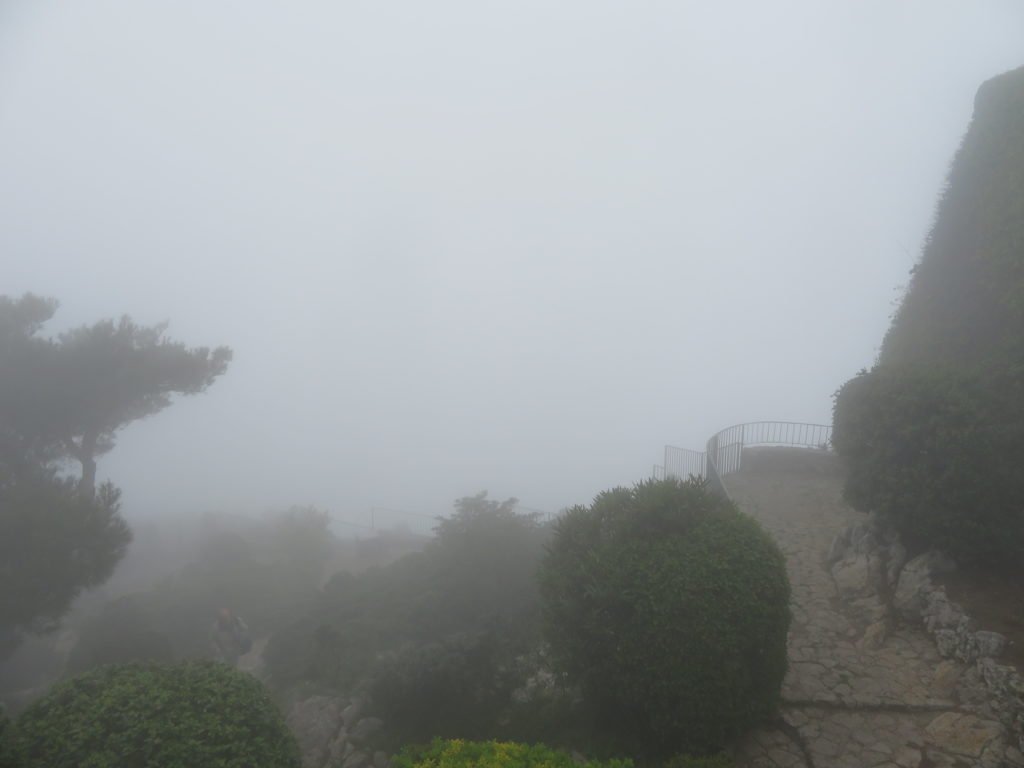 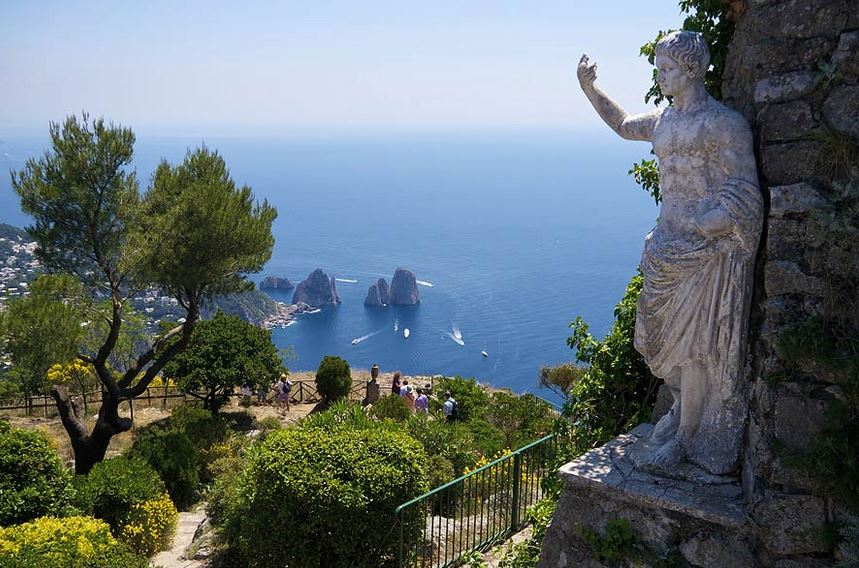 The fog cleared later in the day so if you have the option, wait to do the chairlift in the afternoon instead of first thing in the morning.

No day in Italy would be complete without some gelato! 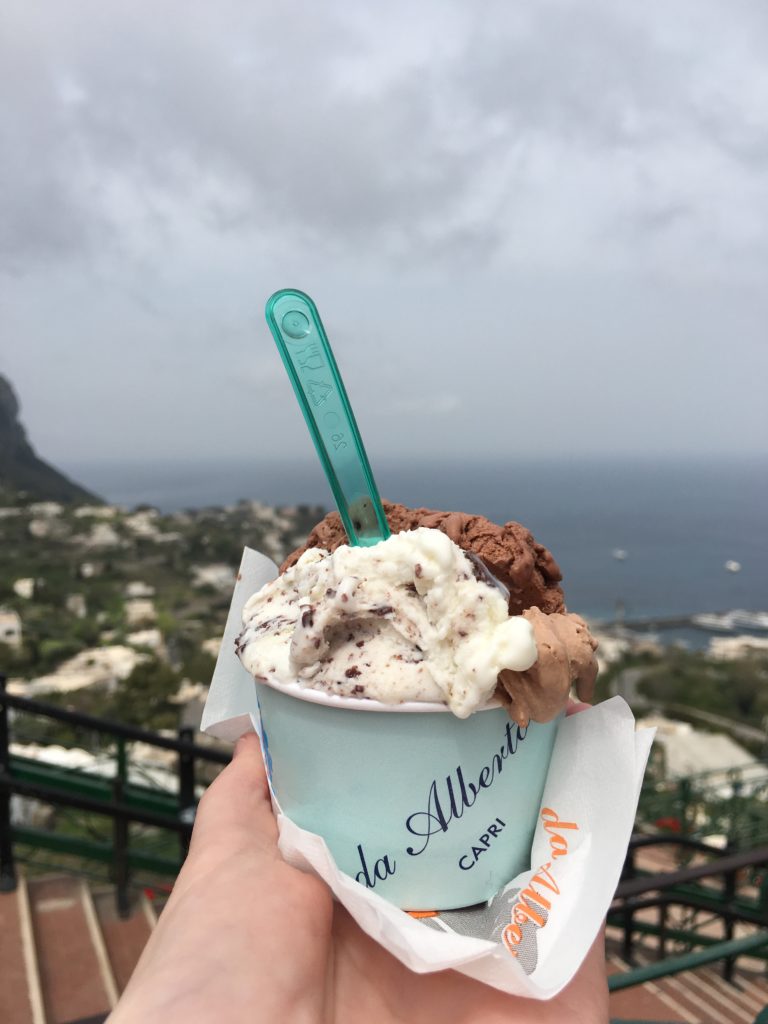 Walk the narrow streets of AnaCapri

Since the roads are so narrow, be careful to get out of the way when walking on the side of the road 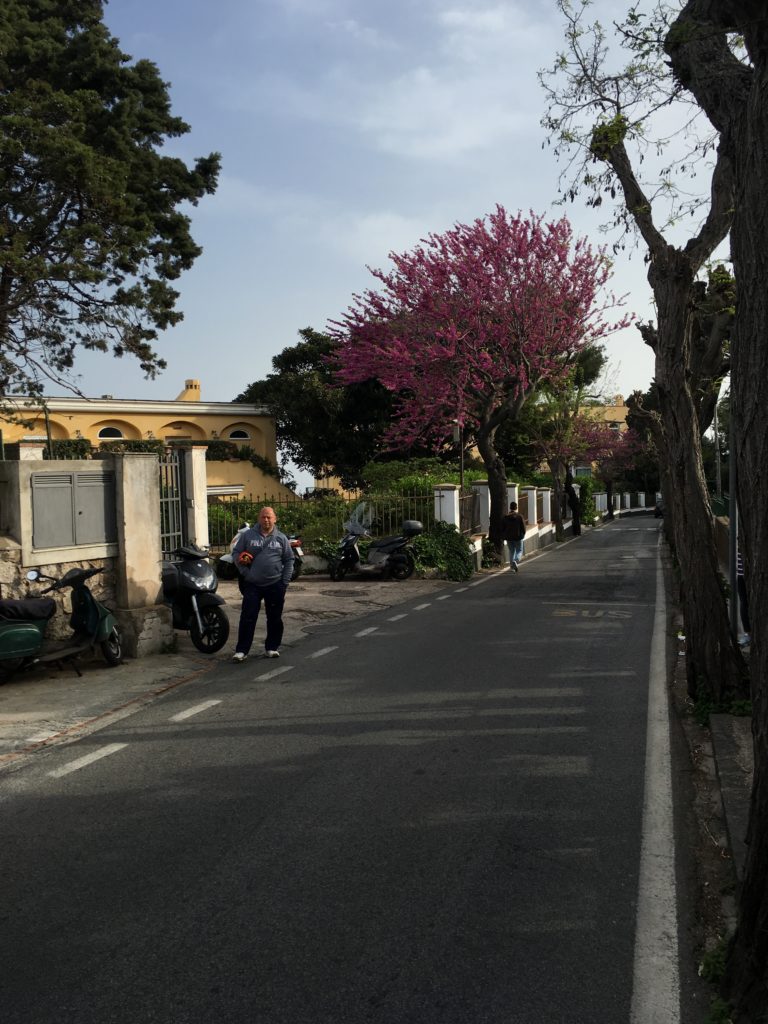 If you’re not afraid of tight spaces and have some $$ to spend, take a trip to the Blue Grotto (if you can manage to time it as spaces are limited).

Take photos of the miniature cars

The garbage truck, police cars, pubic buses and maintenance vehicles with trailers (that reminded me of a big wheelbarrow!) are all miniaturised on the island.

The roads on Capri are basically the width of a one lane road so taking the bus is an experience in and off itself! 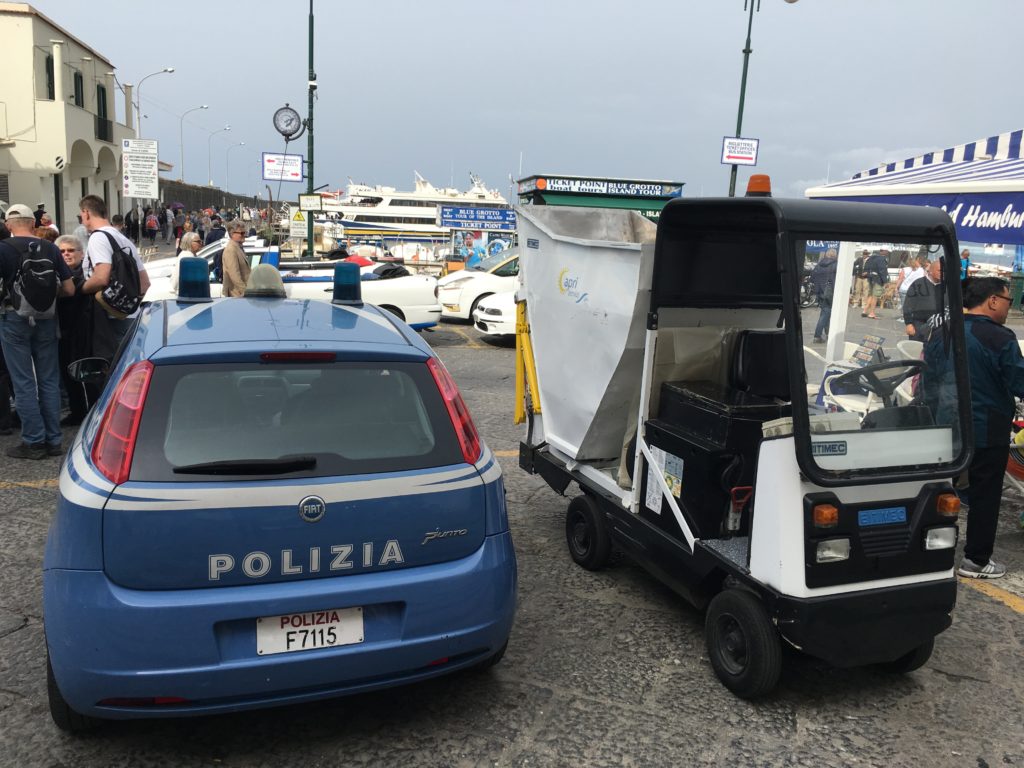 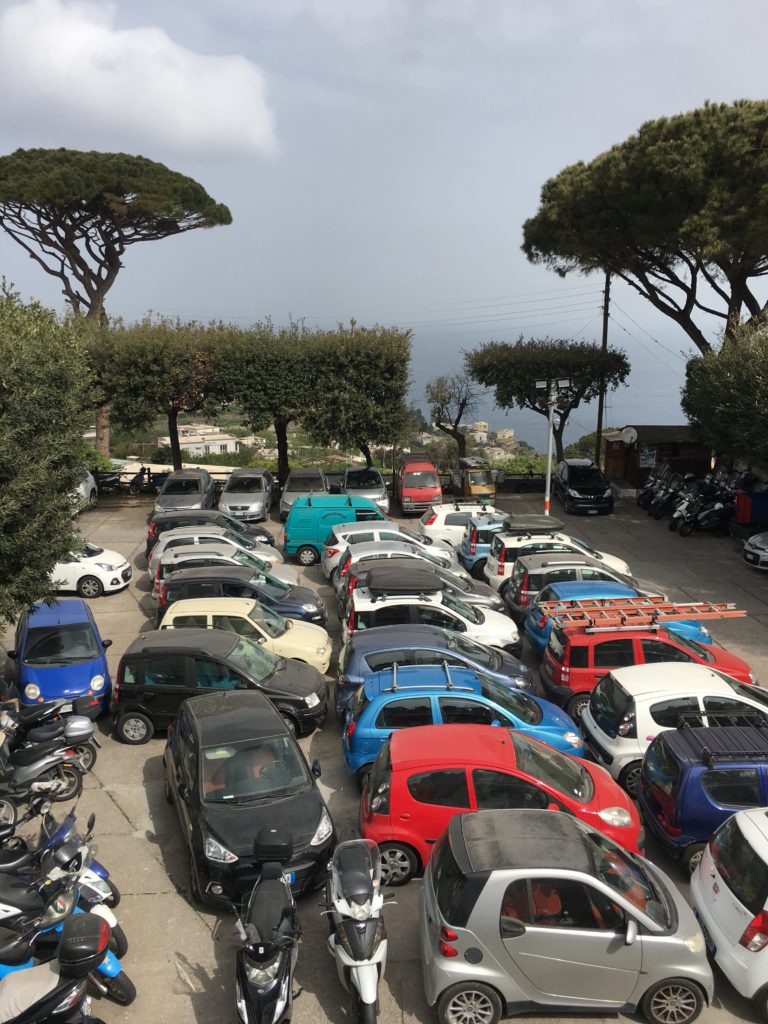 Is this the world’s smallest roundabout? 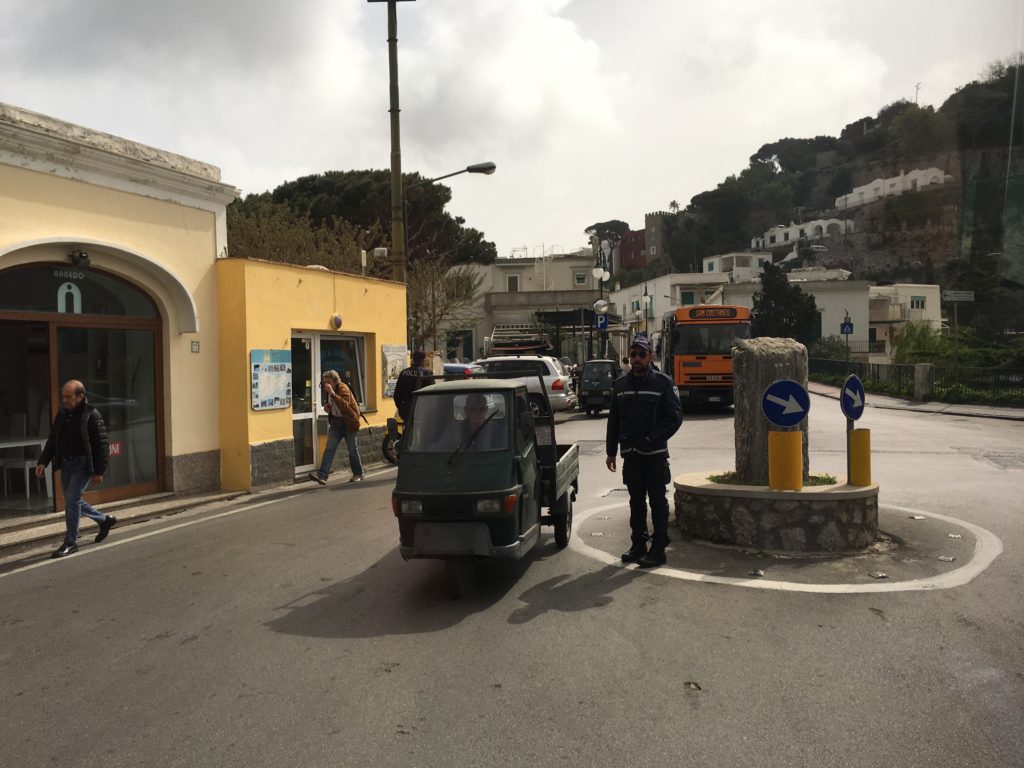 Being an island with plenty of cliff faces, there are plenty of viewpoints 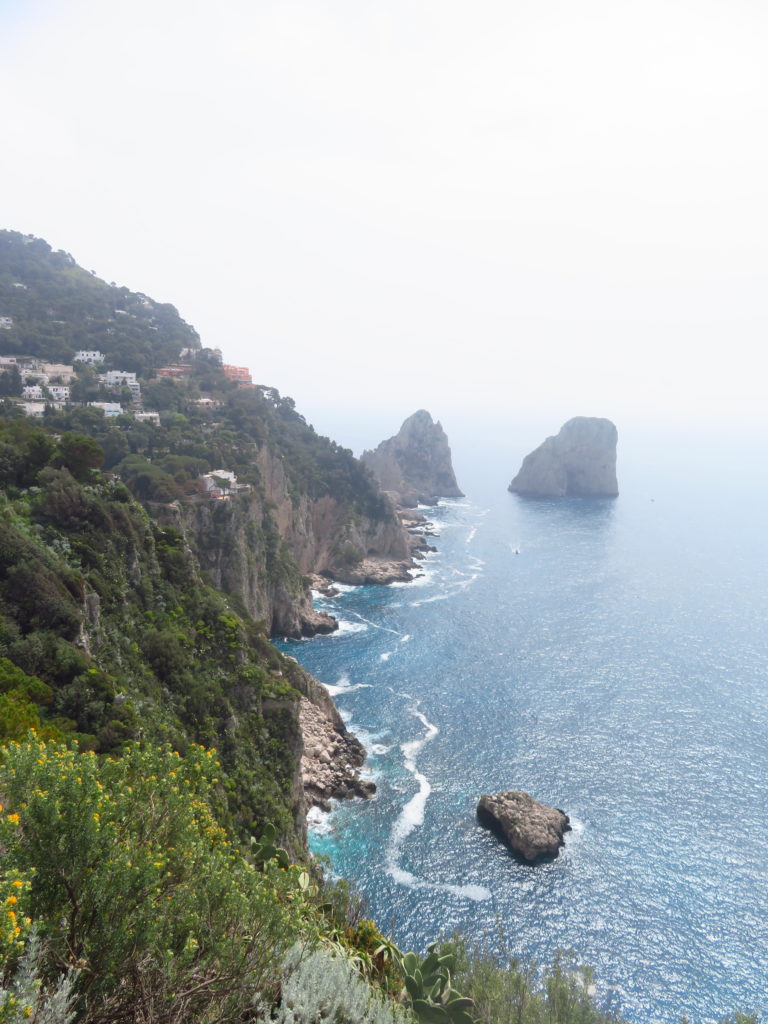 To get that famous picture, head to Augustus Gardens. It’s paid entry (only a small fee though so definitely worth it)

Mid level part of the island: 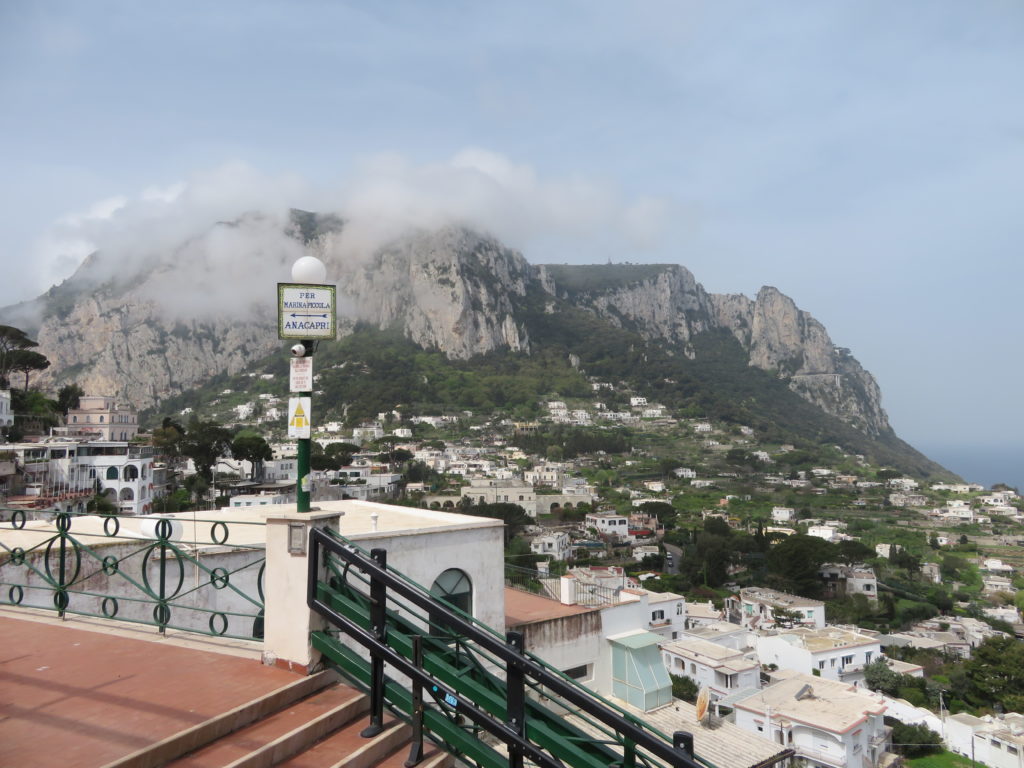 I visited as part of an organized tour. We arrived on a boat from Naples and left on the boat from Capri to Sorrento. 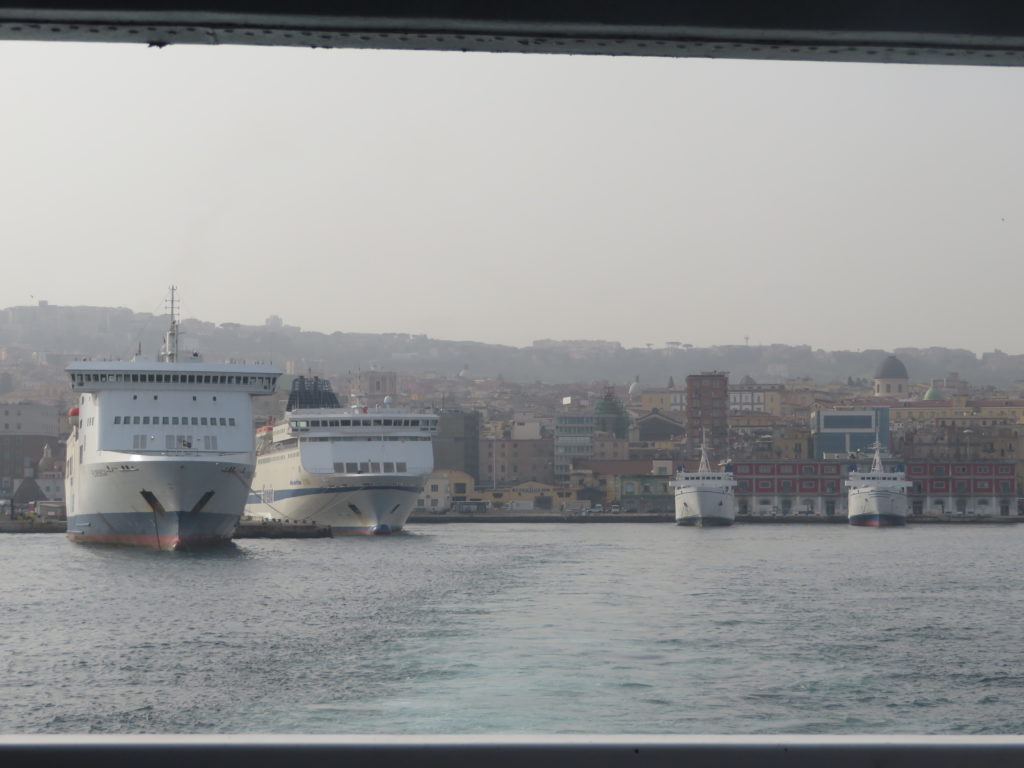 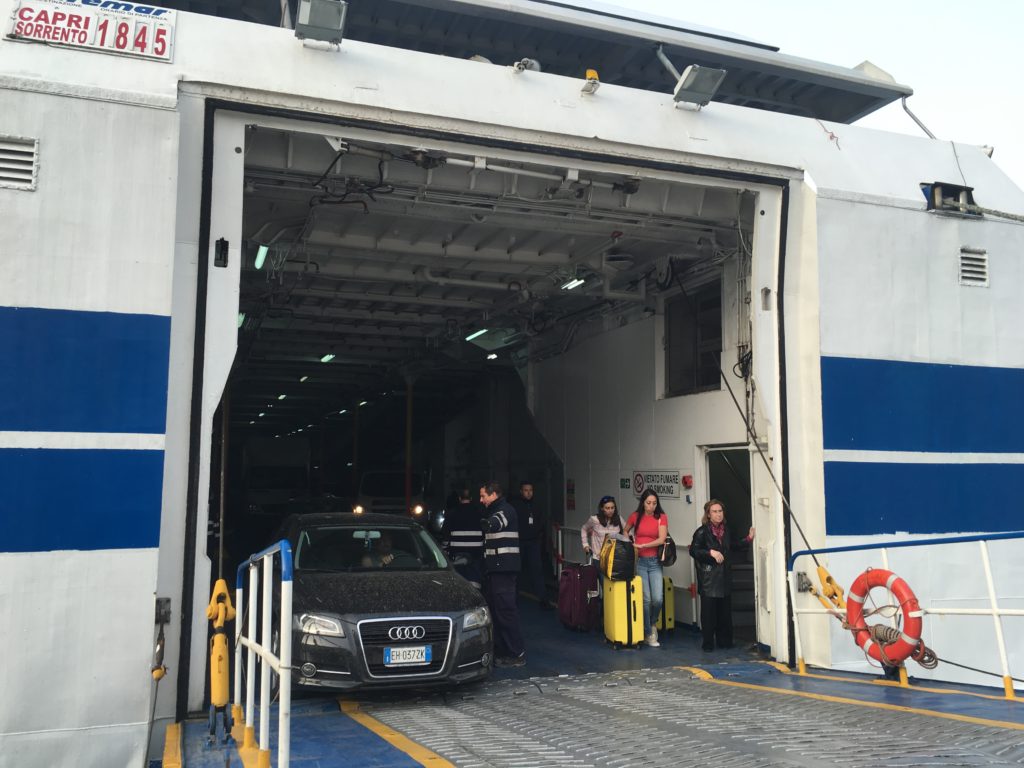 Don’t be afraid to take the public bus. It’s cheap and the people were friendly telling us which stop to get off at.

There’s also a funicular on the island although this was closed for maintenance during my visit.

It’s basically impossible to walk the entire island – it’s a lot bigger than you think.

Due to the massive cliff faces I wouldn’t recommend taking the steps from Capri up to Ana Capri (where the Monte Solaro chairlift is). Just spend a couple of dollars and take the public bus.

If you don’t like heights, don’t sit beside the window – the road up to AnaCapri (like the rest of Italy) is very windy and very steep. 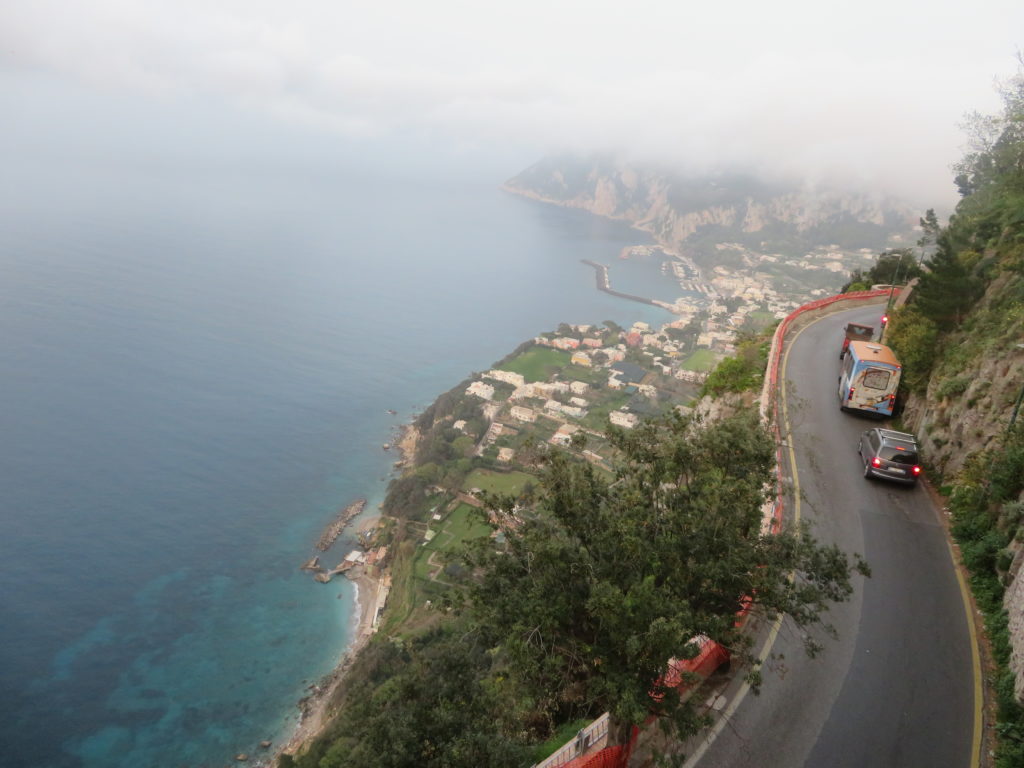 How long to stay

I arrived on the last ferry of the day from Naples, spent a full day exploring Capri and then headed to Sorrento the following morning. I think one day is just the right amount of time. 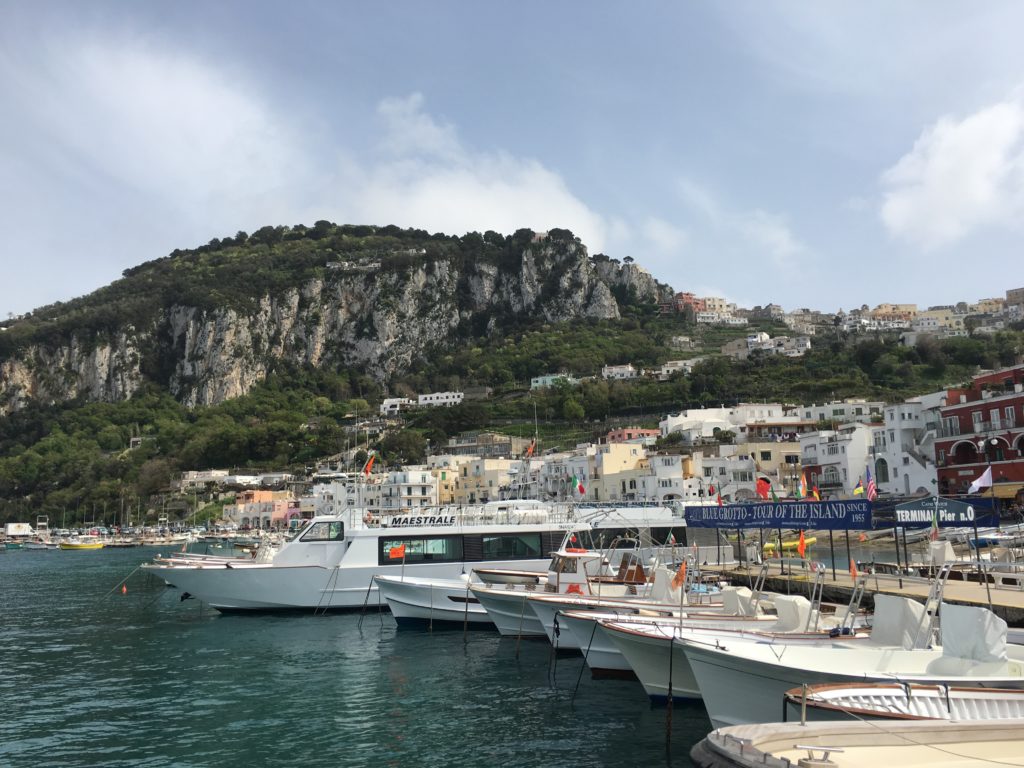 Best time of year to visit

I visited in spring (mid April). I think this was a good time of year to visit. The island wasn’t overrun with tourists like I imagine it would be during summer. It was warm during the day and bit chilly at night. 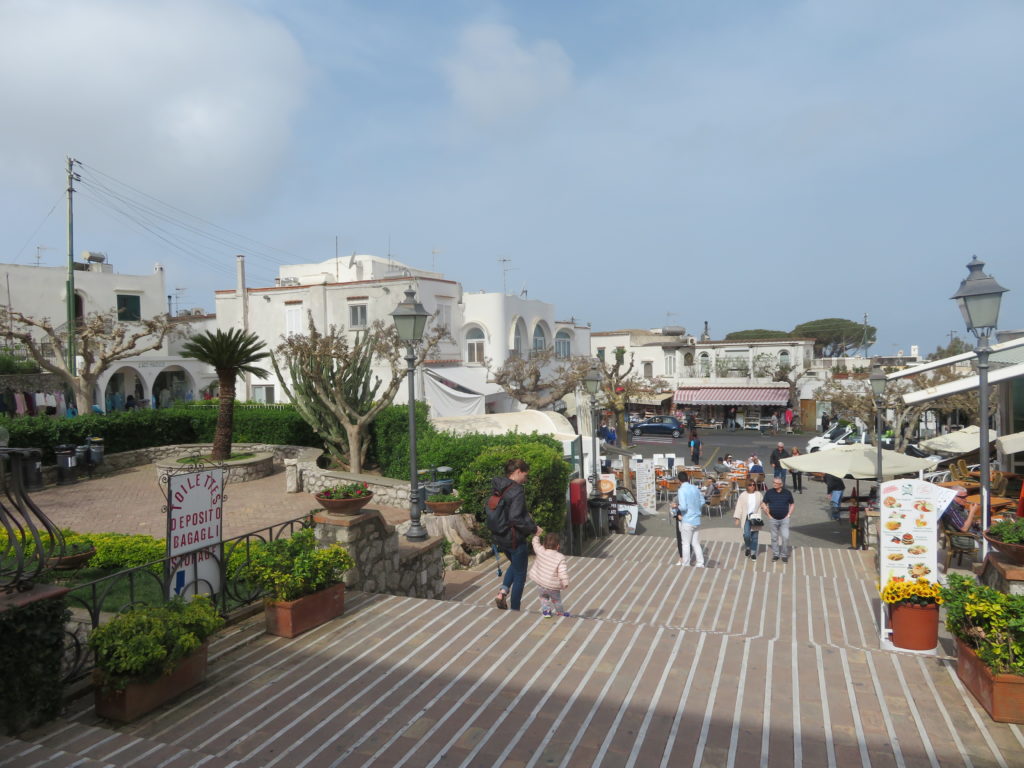 I stayed at Hotel San Michele as it was included as part of the organised tour I took. The location was ok. It was only a short walk to the Monte Solaro chairlift, a few shops and good viewpoints. There weren’t many restaurants around (average dinners at the hotel were included in the tour). Google maps indicates there’s more food places on the other side of the island (Matermania)

Much like Rome (and the rest of Italy), the hotel and the buildings are a bit rundown so don’t expect too much!

Transporting our luggage to the hotel was included in the organized tour so we didn’t have to worry about that (one of the reasons I chose to do an organised tour – much less hassle). The tour guide only allowed each couple / group of 2 to take one suitcase with them (the rest were taken to Sorrento, the next stop on the tour via the tour bus). So if you’re heading to the island by yourself, be sure to check those types of things first.

Given the expensive price of the organized tour I took, I imagine it would be quite expensive to get to the island yourself and would be a pain to organize luggage transfer from the ferry.

If I’d done this myself I would’ve just stayed in Sorrento another night and done a day trip from Sorrento. 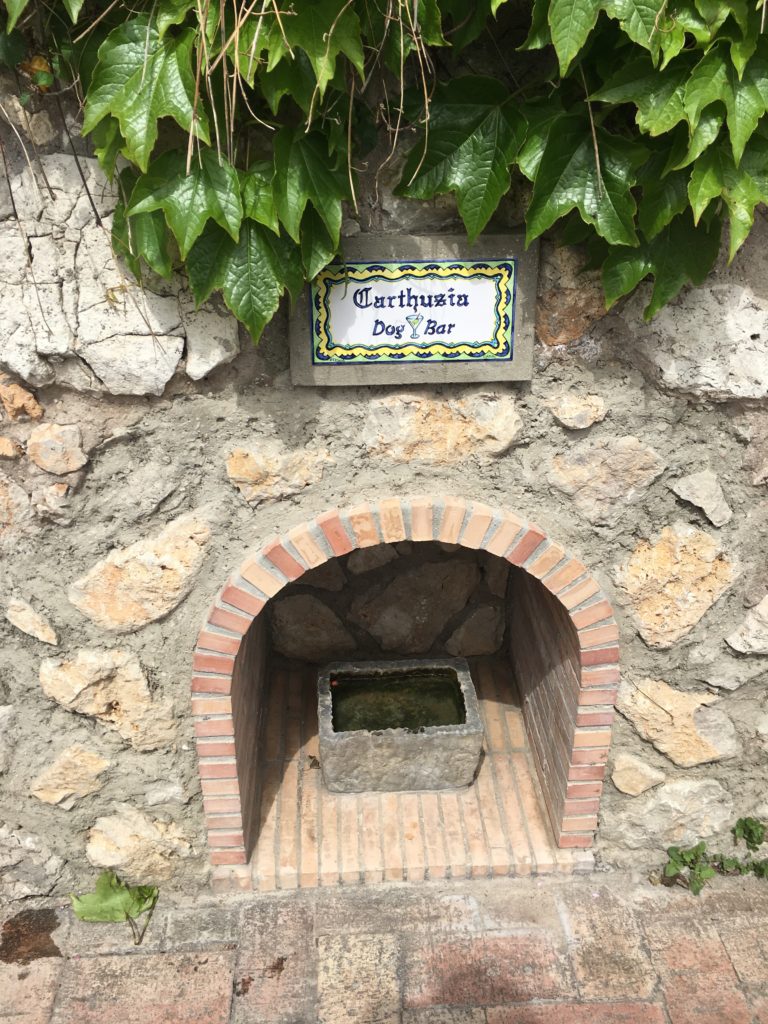 1 day on the island

If you only have 1 day, this is what I recommend:

Remember that Italy is very laid back so be sure to check the bus times and get 1 or 2 buses before you need to get your ferry. The buses could be full during busy times of the year and the buses can be unreliable (run on ‘island time’) 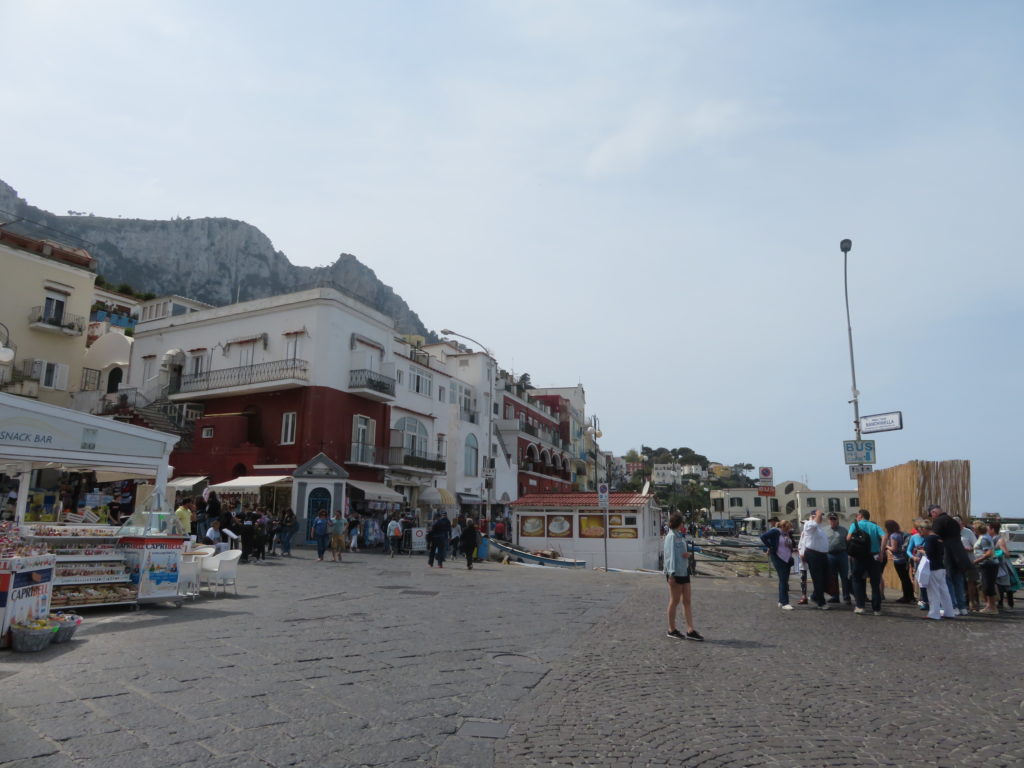 Would I go back to Capri?

No. Once was great and I’m so, so glad I went – but I don’t need to go back again. There were other people on the tour with me that had been to Capri 10 years earlier and said it was basically exactly the same as they remembered it so I think once would be enough!