Stencils that help you mark up monthly calendars, to do lists, annual overviews and weekly spreads by counting boxes save so. much. time. I think they’re the most important bullet journaling supply apart from Frixion erasable pen (and a good quality notebook of course!)

Instead of wasting time counting dots, marking up the spread, then erasing, then realised you might have miscounted, so then you start counting again but forget where you’re up to so have to start counting again… a row and column stencil will do that for you.

I’ve been trying out different row and column stencils over the past year and managed to find 5 which I’ve ranked in this post.

All of these stencils are designed to be used with a 5mm dot grid (which is the most popular dot grid spacing in bullet journal notebooks). Keep in mind that these stencils are designed to be used for A5 page size or smaller. Depending on the number of dots vertically and horizontally in your notebook, the stencils may not always align perfectly. I’m yet to find a stencil that can do larger (e.g. B5) page size.

This post contains affiliate links. If you make a purchase after clicking one of these links I’ll receive a small commission in exchange for referring you (at no extra cost to you).

The 5 row and column stencil brands are (left to right in the photo below):

All of the stencils on this list are more flimsy than I would like. They slip / move easily so I hold them with one hand while I mark dots where lines needs to connect on the page. All of them feel like bendy plastic except for the Moxie Dorie stencils which are thin cardstock. 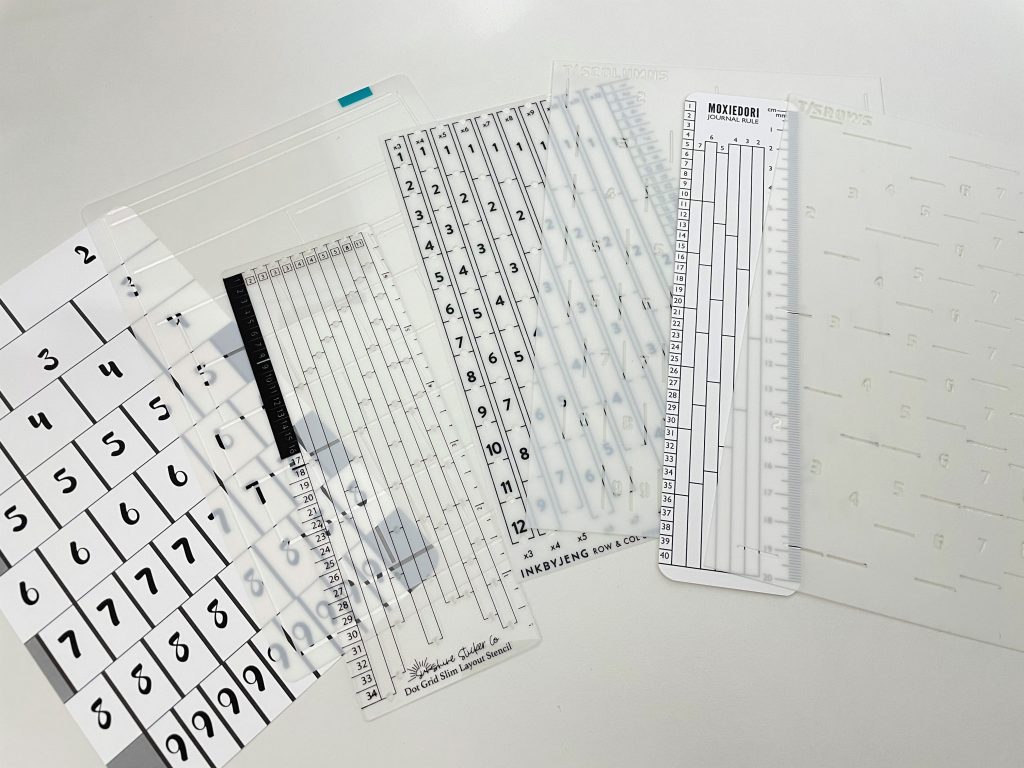 The first row and column stencil I found and still my favorite. Unfortunately Ink By Jeng seems to have closed down and no longer sells the stencil. The reason I liked this one is because it was pre-sized for A5 so suited most notebooks. The photos below are in the Leuchtturm.

I did a detailed review of the Ink by Jeng stencil in this post. 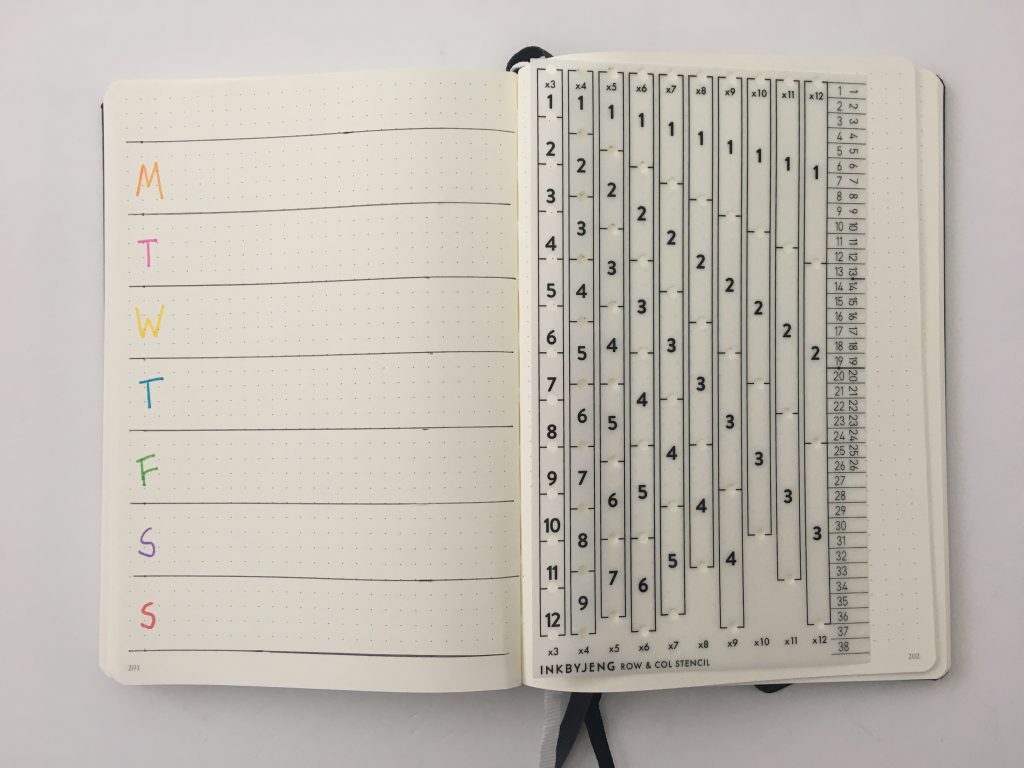 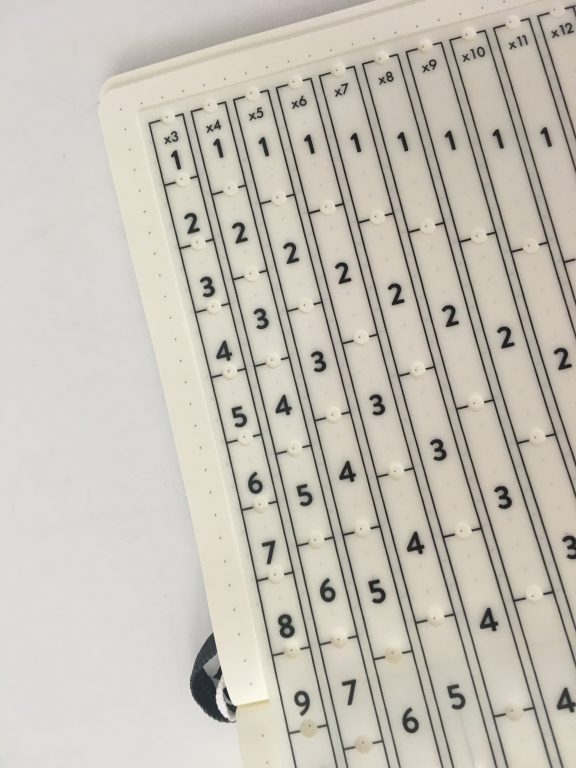 I also liked this stencil because it has markers for up to 12 sections (ideal for annual overview planning / seasonal tasks tracking etc.) – none of the other stencils on this list go up to 12. It also has a horizontal and vertical numbers guide.

The large font size, bold black font, gaps between the guides and holes within the grid makes it really easy and quick to use. 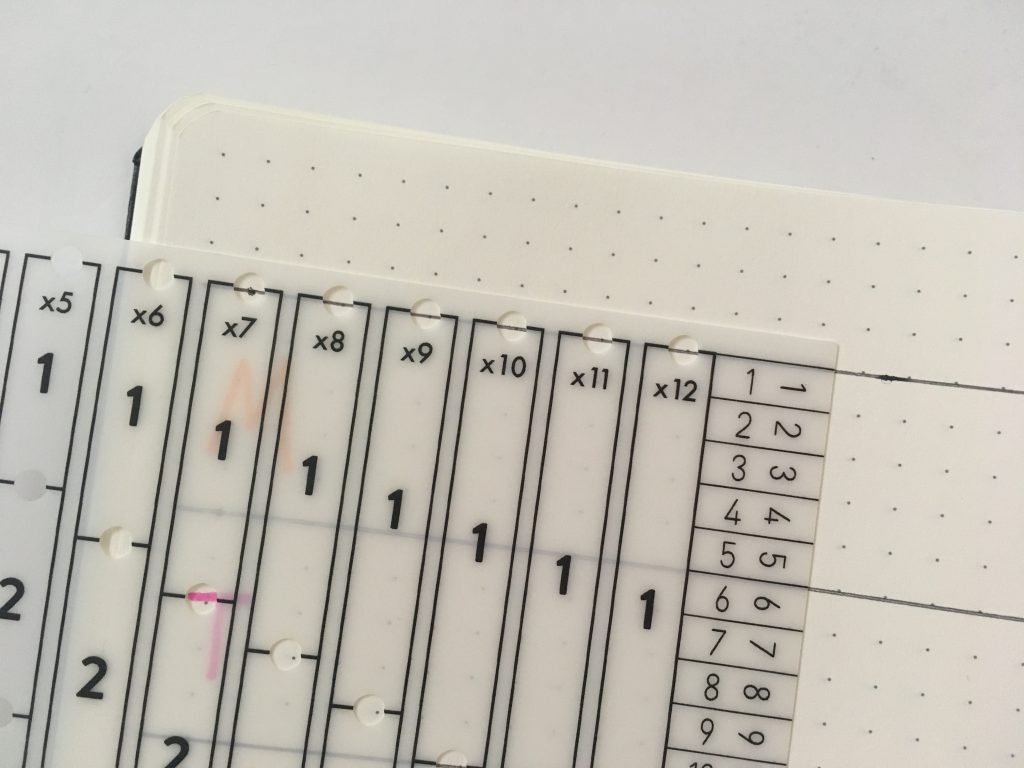 This stencil is small enough for travellers notebooks but you could still use it for larger page sizes if you just rotate the stencil orientation.

The vertical numbers are helpful if you want to do numbered lists or a vertical monthly spread. I much prefer this style of stencil – transparent with punch outs where you can mark the hole for your spreads.

The plastic material feels like the Ink By Jeng Stencil and since that is no longer available, this one is my second pick. 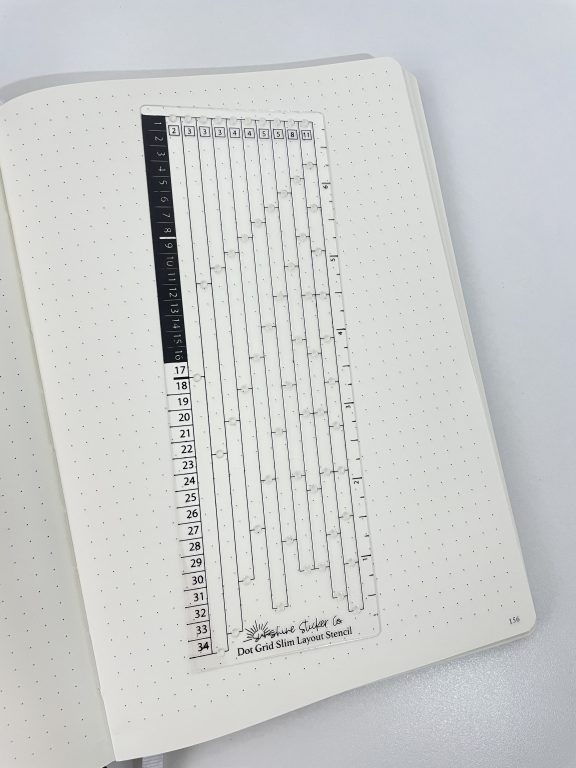 Note: When I purchased this stencil it was sold at a discount due to a misprint. It does not affect the design or function of the stencil but the column that marks the page to be divided in 6 is labelled as 5 instead 6.

At the time of writing this post Sunshine Sticker Co. haven’t yet re-ordered another batch of these stencils with the printing error fixed. 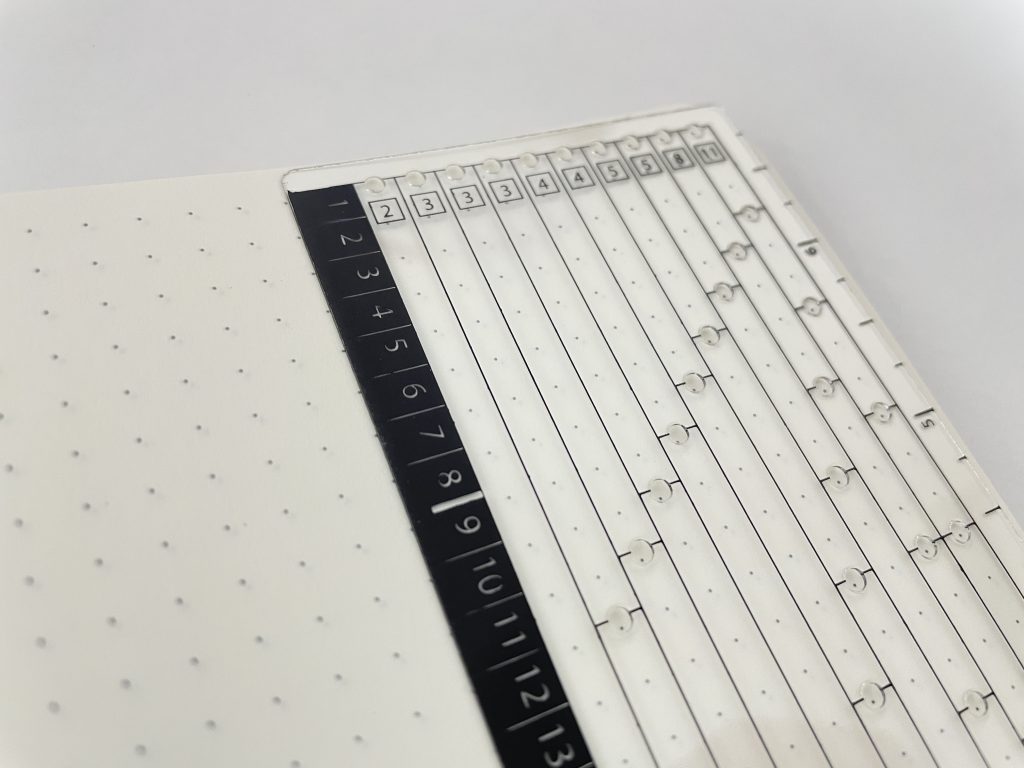 I like these stencils, but they don’t always perfectly align. if you’re ok with the border of the boxes going in between the dot grid rather than always on the dot grid then it’s fine. The gaps in the stencil are large enough to fit I’d say a 1.0 pen tip if you wanted bold borders.

Some of the holes / lines don’t align with the dot grid e.g. if you want 7 sections, the stencil places the line in the middle of the boxes to make it fit. I prefer when the lines are drawn over the dots instead of between, so have ranked this stencil third. 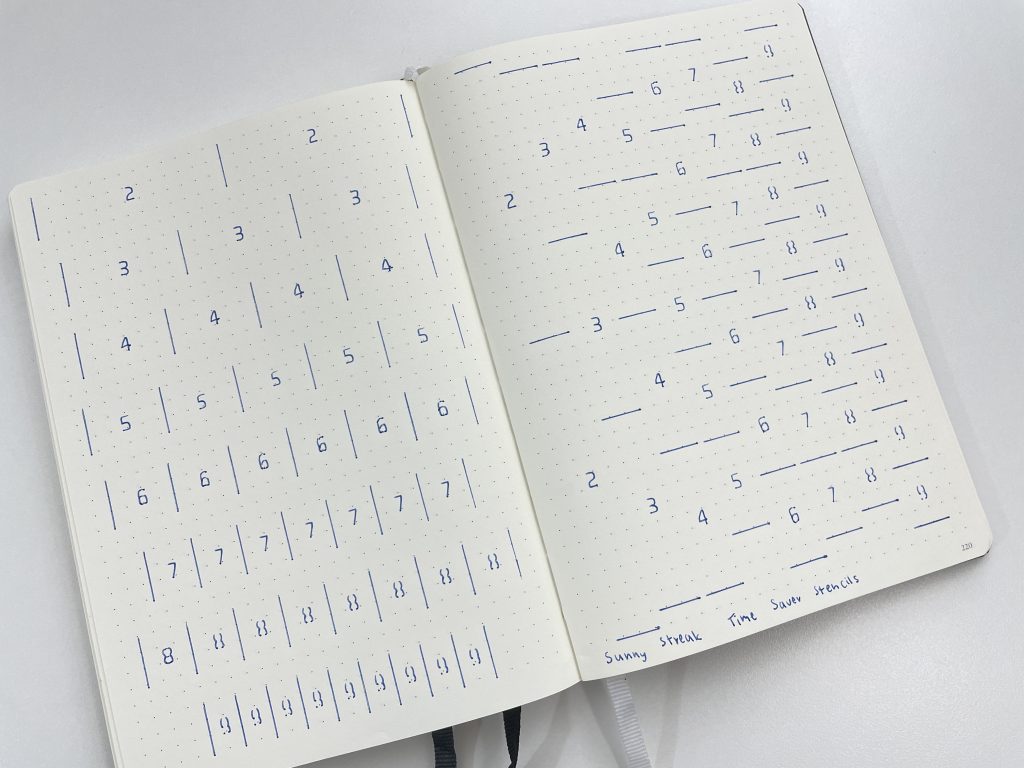 This stencil comes in a set of 3 from Amazon (tried to add the link here but it appears to have disappeared off of Amazon). The plastic is bendy but sturdy enough that it doesn’t move too much when you’re using the stencil. 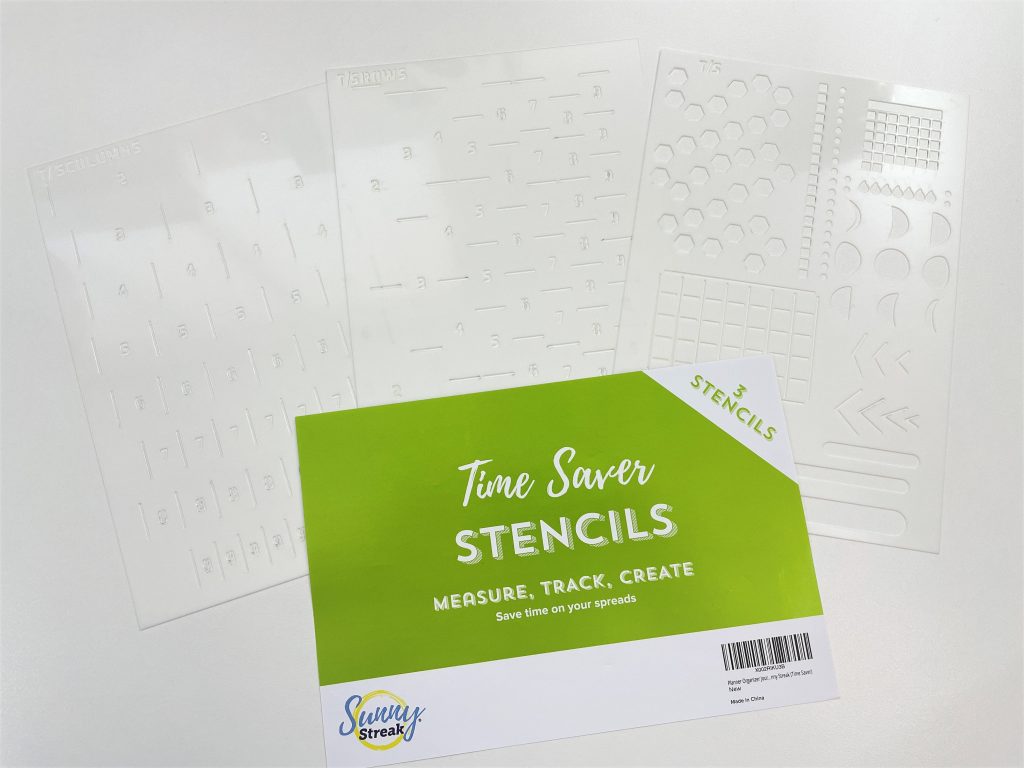 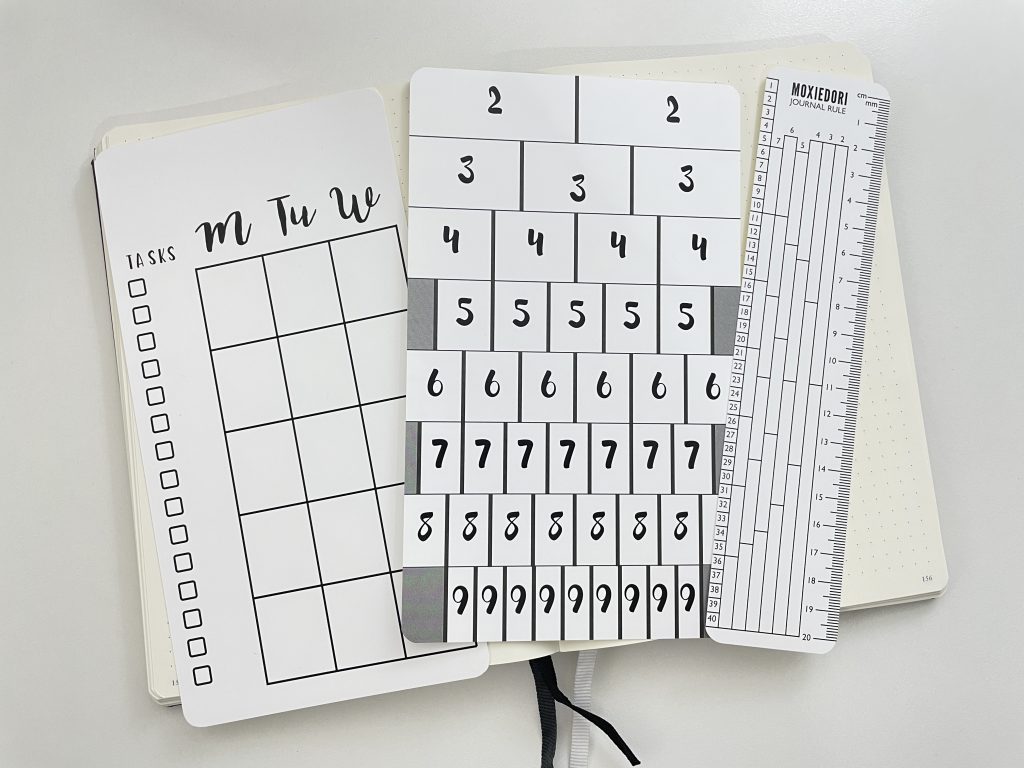 The only row and column stencil I have that isn’t transparent, and because of this, I don’t use it very often – I find it harder to line things up as there’s nowhere for the pen to ‘catch’ when you mark the dots on the page. You’re marking over the top of the stencil not in the stencil. I have to use my other hand to press down on the page, otherwise the pages never lay perfectly flat to see the tracing card underneath. 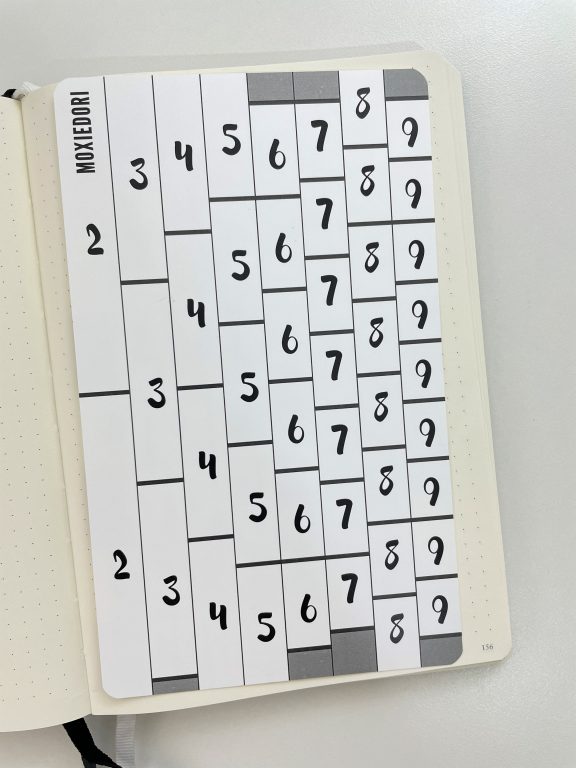 The paper of the Leuchtturm is thin (80 GSM) – see below. I can barely see the tracing card underneath 120GSM (Clever Fox) and Vivid Scribbles (140 GSM) and cannot see it at all (even if I hold the notebook under a light) in the Archer and Olive (160 GSM). 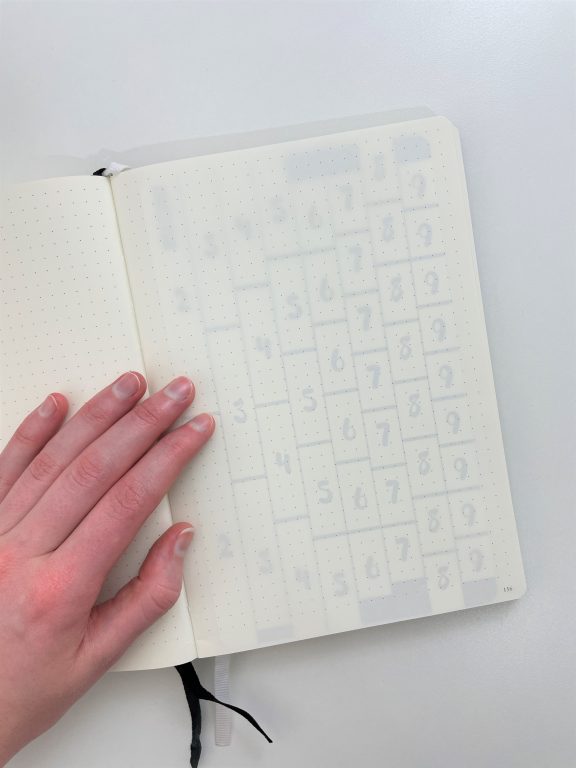 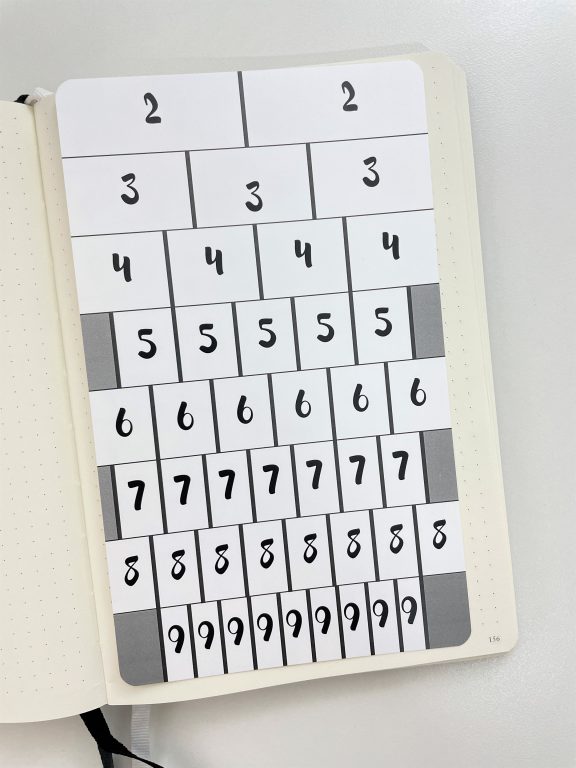 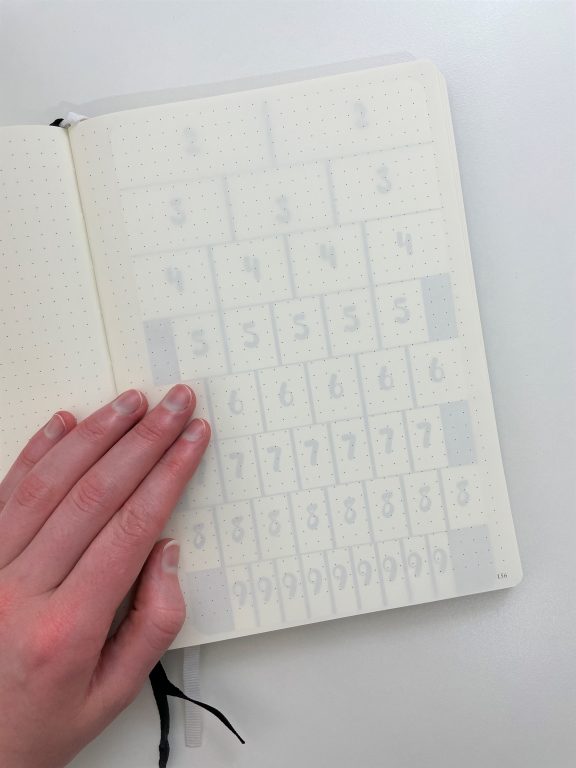 Because you’re placing it under the page instead of above, I mark the dots, then remove the stencil and rule the lines.

I also don’t like that these stencils are double sided. You have to flip the cards over to see the rest. So for the monthly calendar in the photo below, you only get the rest of the month when you flip that card over. The tasks bar of that monthly calendar is far too small to write more than 1 to 2 words against each task. The row and column stencil is also printed double sided.

I like the journal rule stencil better – the numbers are helpful for vertical monthly calendars and lists. The grid guide has a similar format to the Ink by Jeng and Sunshine Sticker Co, but the lines are thinner, there’s no gap between the number grids and there’s no holes to mark the dots so it takes longer to mark up the grid. The stencil is very compact so if you’re using your planner away from home you could easily take this with you. 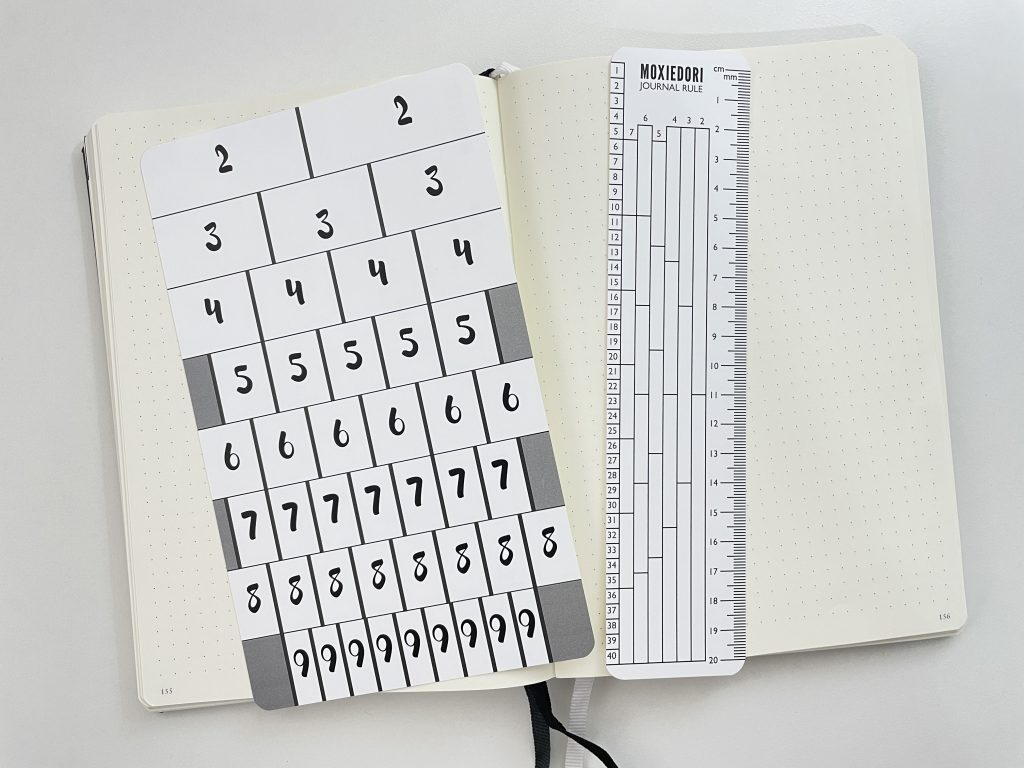 The material of these stencils is very thin cardstock, I wish it was something stronger and transparent like acrylic.

This row and column stencil was in a bundle of 24 stencils for only $12 USD… so just $0.50 USD for this stencil! The plastic is more flimsy than other stencils I’ve purchased (and all of the others on this list). If you rule lines instead of just using this stencil for dots, expect the stencil to move. I had to erase and redo a few of the lines in the photo below.

If you’ve never tried a row and column stencil (or bullet journaling stencils), then this bundle that it comes in would be a good place to start to try them out. 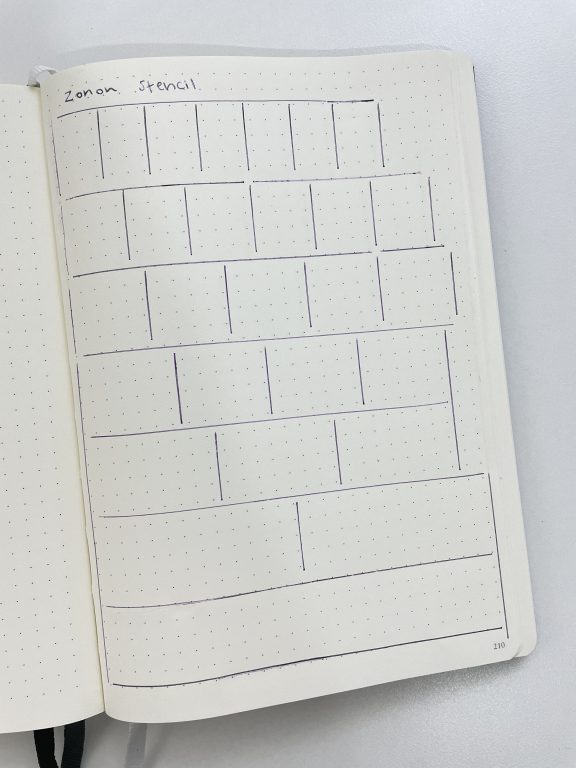 Unfortunately, this stencil places the lines between the dots rather than on the dots and the placement of the line is not always in the middle of the grid (at least it wasn’t for the number of dots in the Leuchtturm notebook I used to test it).

The blue on the corner of the stencil in the photo below is washi tape. I tag all of my stencil sets in a different washi tape so I can mix and match different stencils to create spreads, then put things back in their collections at the end so I can find specific stencils quickly next time. I also print the listing image on Amazon or wherever I purchase the stencil from, which shows all of the different stencils in the collection for quick reference. 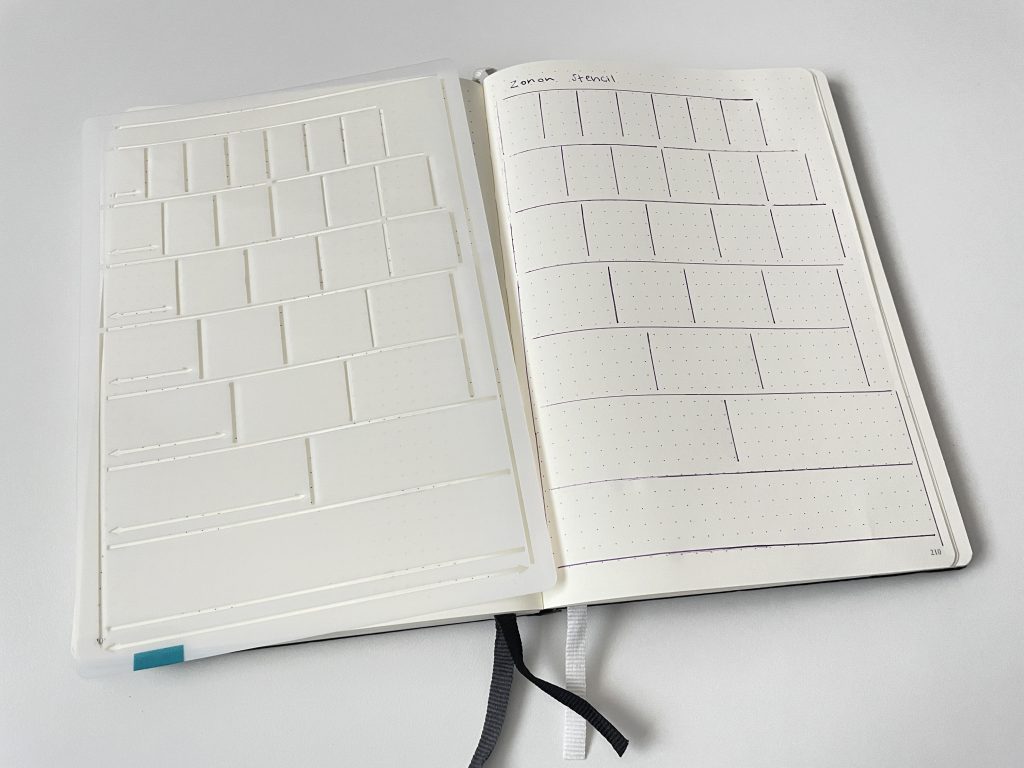 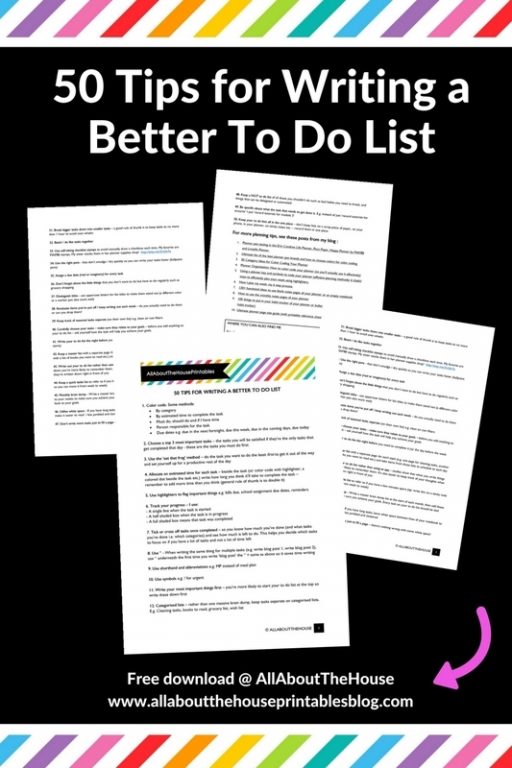