Lists are my favorite way to plan the week but since most planners only have small list sections for each week, I opted to use my own printables this week.

I went for a random mix of things:

Way back in 2017, I created a printable I called the ‘anything list‘. It had 4 checkboxes – a layout that can be adapted in so many ways. That week had the quickest setup, no decorating (I used black pen for the entire thing and actually considered throwing it out and redoing my spread to be ‘prettier’). But oddly enough, that week turned out to be one of the most popular of the entire 52 planners in 52 weeks challenge.

Since then, I’ve used that anything list many times over the years and finally updated it to a rainbow version which I decided to use this week! 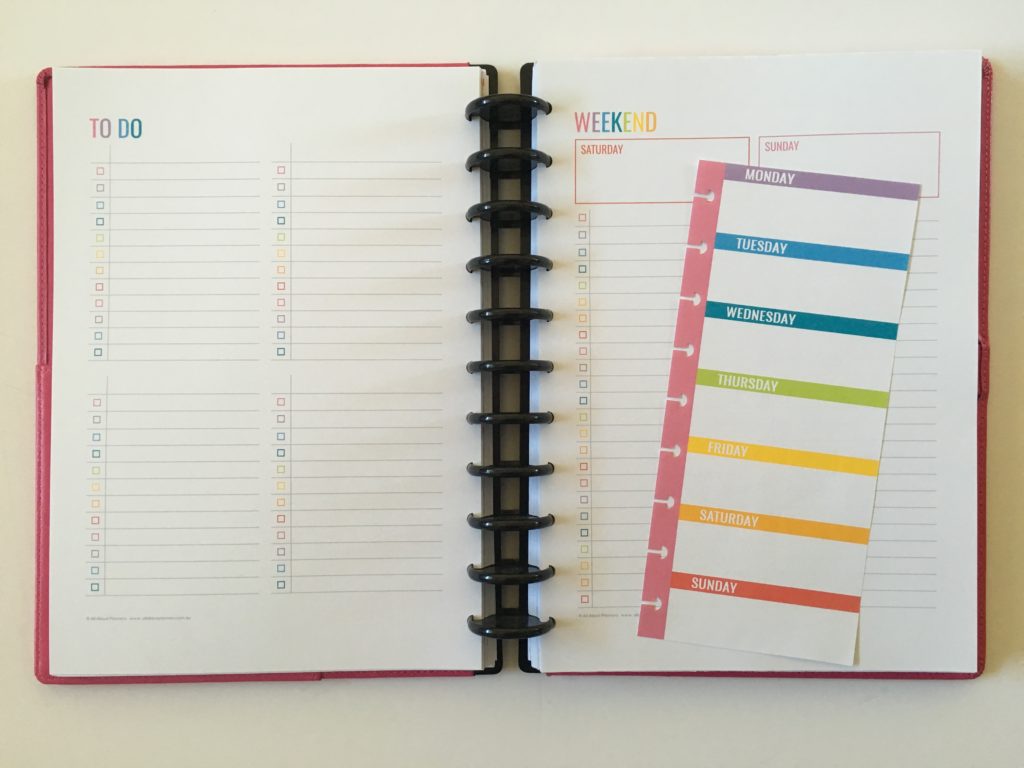 By the end of the week I’m usually reaching for a MAMBI half sheet or a sticky note to plan the weekend so this week I added a weekend planning page too. 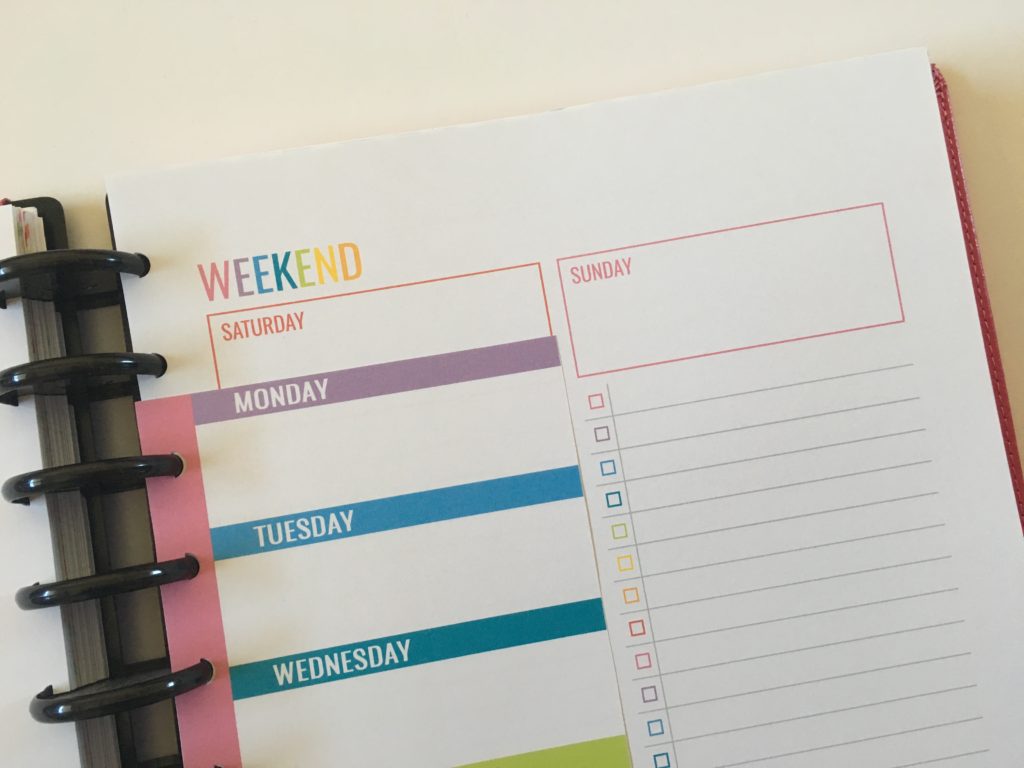 I used the ARC punch for the large printable and the half sheet insert with the MAMBI punch. See this post for detailed comparison of which discbound systems are compatible. 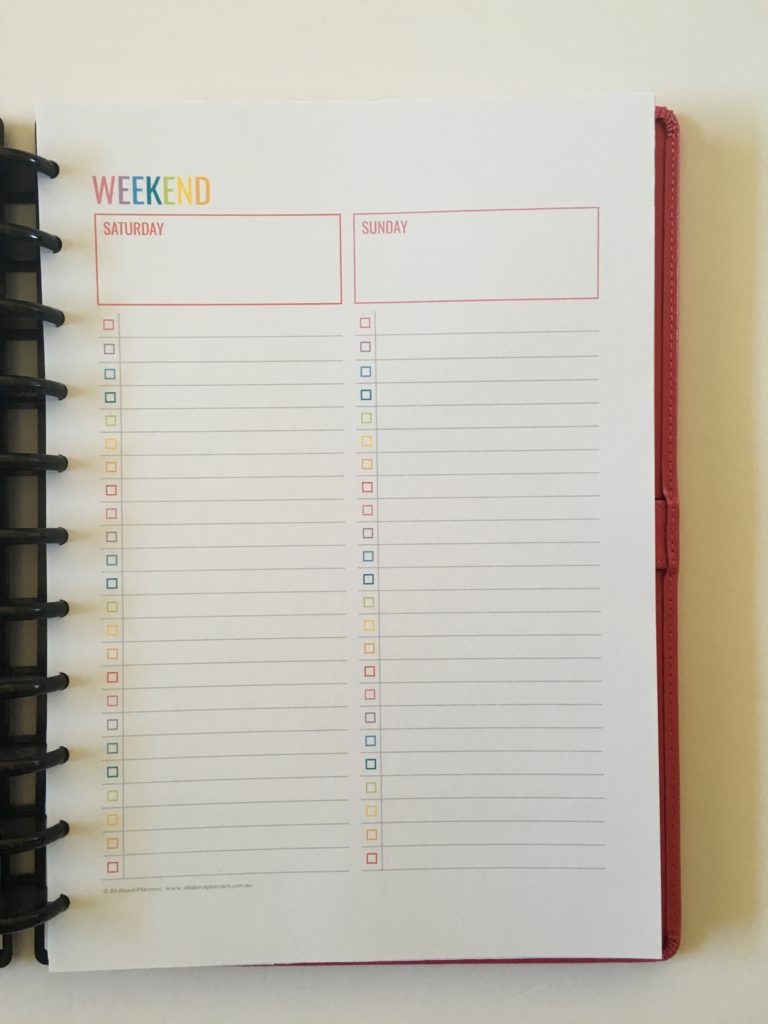 July / August is tax prep time in Australia so I printed out my tax prep lists (from my tax planner printables) and the tax deductions checklist (which you can download for free from the library here. Existing subscribers – login here)

As you can probably see, I went all out using a mix if pens and highlighters to keep the rainbow theme. I tend to always reach for my Inkjoy Gel pens so made sure I used different pens this week! 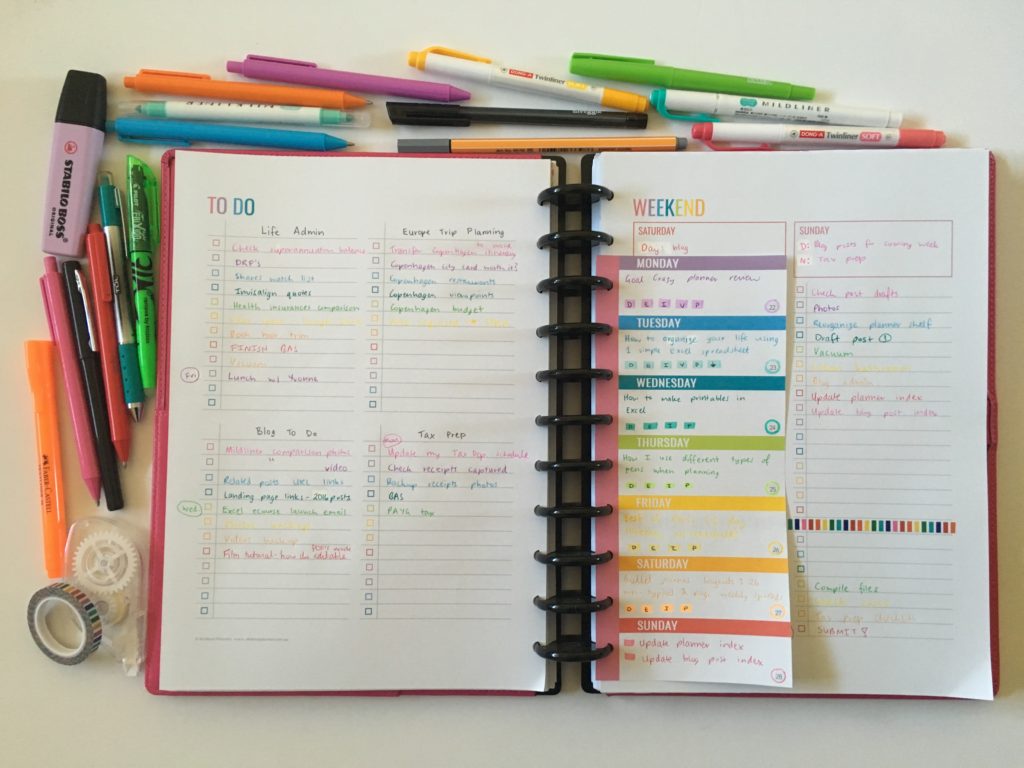 Not sure if you can tell from the photo below, but I used a variety of pens.

Ballpoint pens are much more prone to the ink skipping and leave more of an indent on the back side of the page. Felt tip (similar to fine tip) and gel pens have more vibrant colors and the ink doesn’t skip. Hence why they cost more… However they’re more prone to ghosting and bleed through than ballpoint pens. 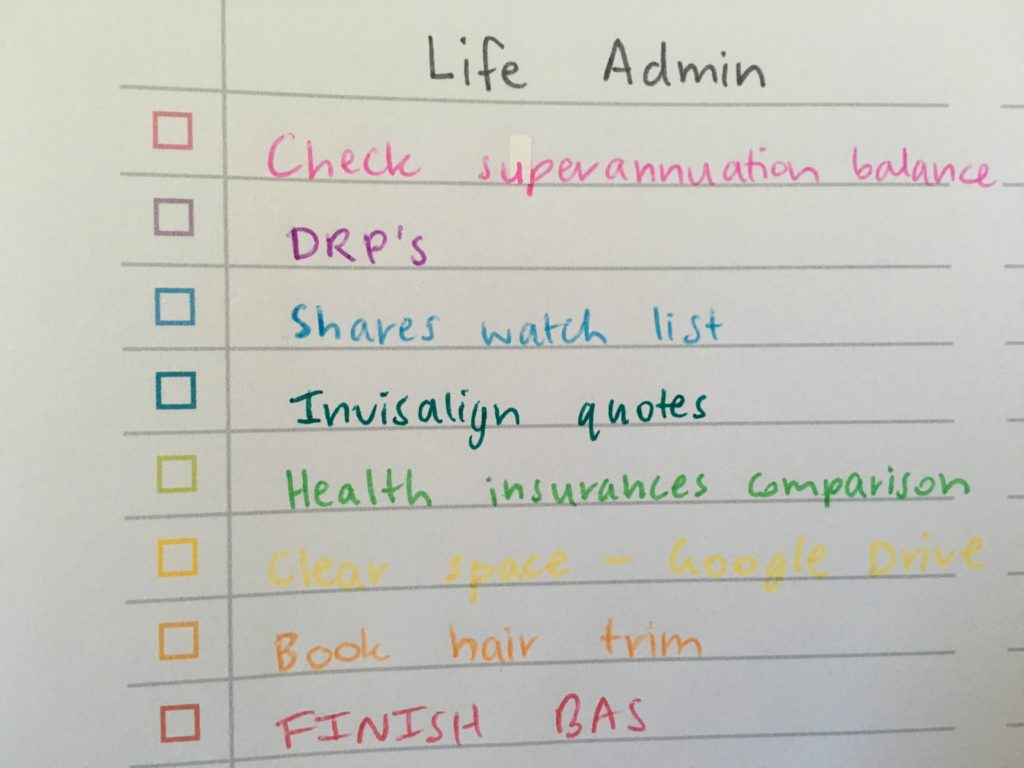 I used the Prima Planner mini date dot stickers (sadly I think they’ve now been discontinued). They’re good for minimalist layouts… but can easily add some color with a highlighter border. Or you could just highlight them before peeling them off and add color that way.

I started out listing to do’s then decided to cluster blog stuff and tax stuff. Then added the day / night. This is about as time structured as I tend to get. I could use a timed schedule but that can be too ‘restrictive’ hence why I just prefer to work off a to do list. 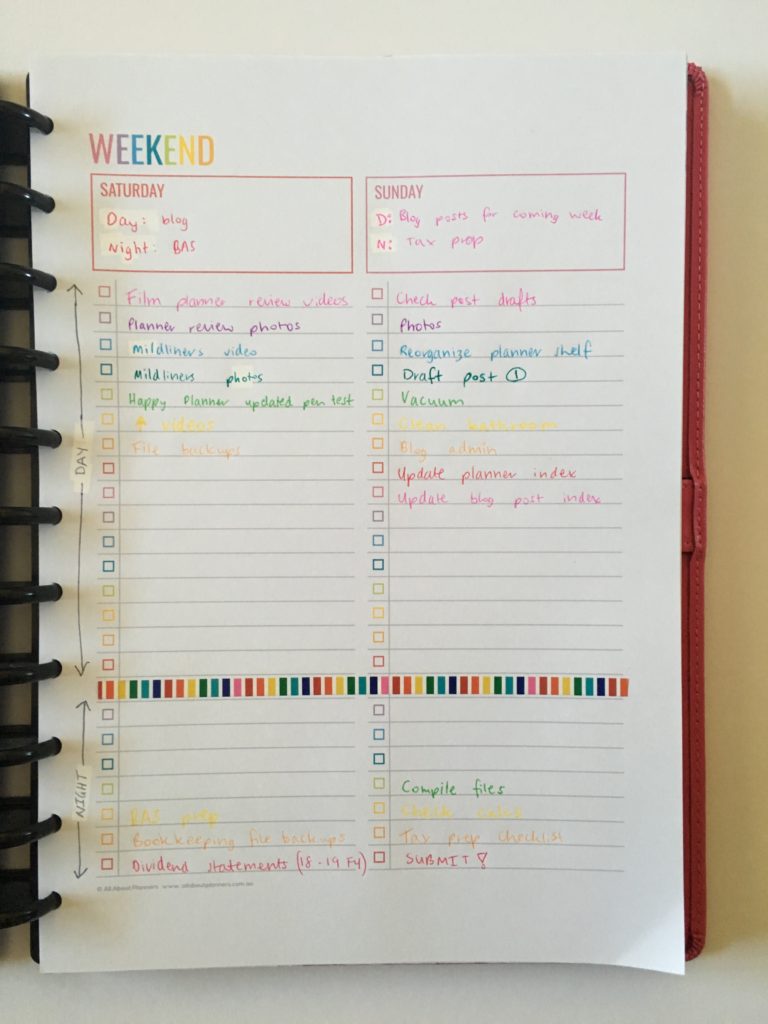 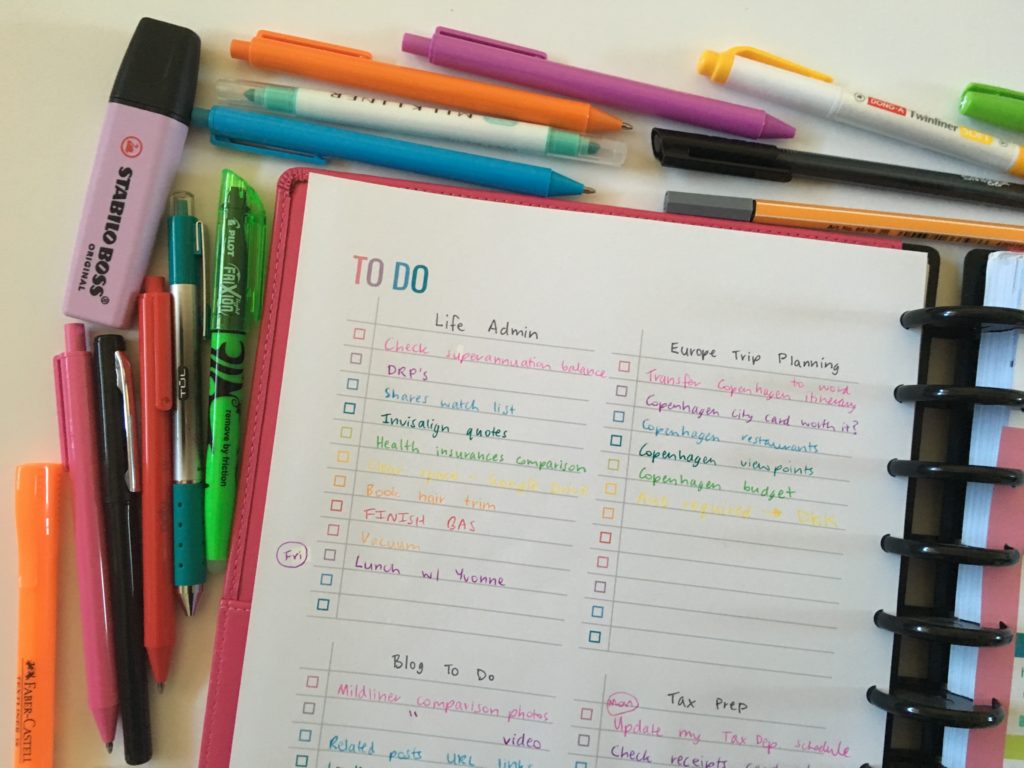 Yes. Allocating tasks to a specific day just doesn’t work for me. I much rather work off a to do list – even better when things are categorised! 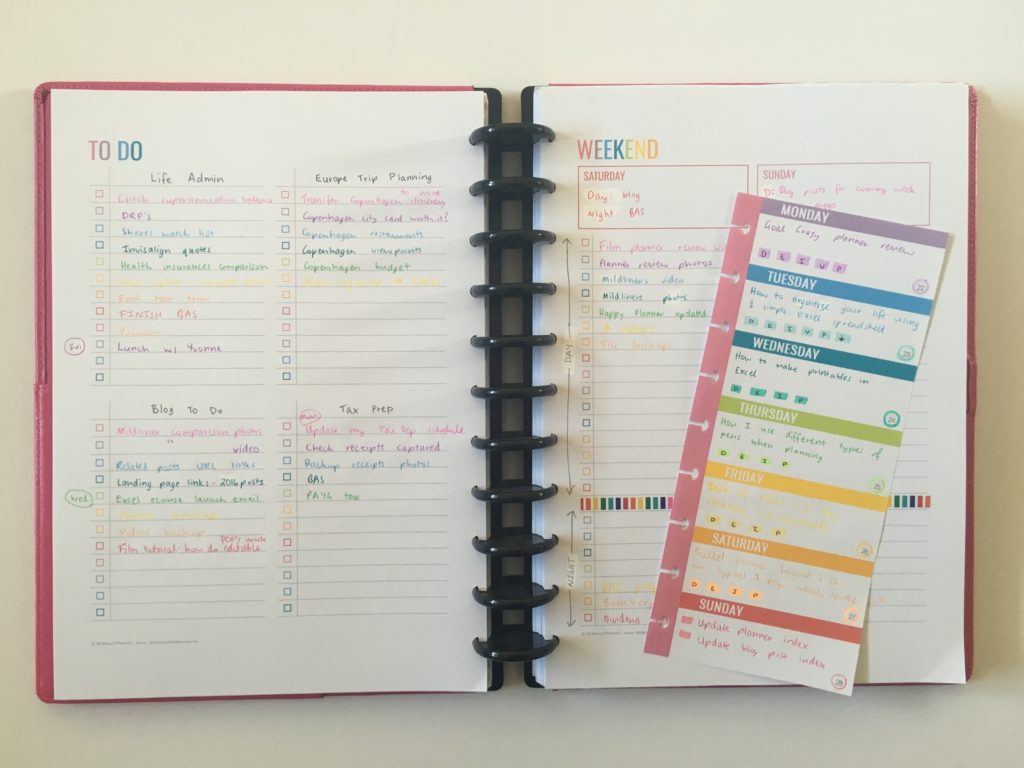