One of the most popular day trips from Riga is a visit to the Rundale Palace. Most tours are either a half day trip from Riga to Rundale Palace only, or a full day trip to 3 palaces. I opted to do the full day tour to 3 different palaces.

The first stop was Mežotne Palace. It was more of a fancy estate house that didn’t look that unique. It was 3.50 euro to enter however it wasn’t set up like an estate house, the entry fee was for an art exhibition in the building. The house had been converted into a hotel so you couldn’t walk around any rooms setup how it would’ve looked back in the day. I opted not to pay the entry fee and just wander around the gardens. However, these were also disappointing – there wasn’t any landscaping, just grass. I ended up just wandering around the gardens for about 20 minutes.

View from the front 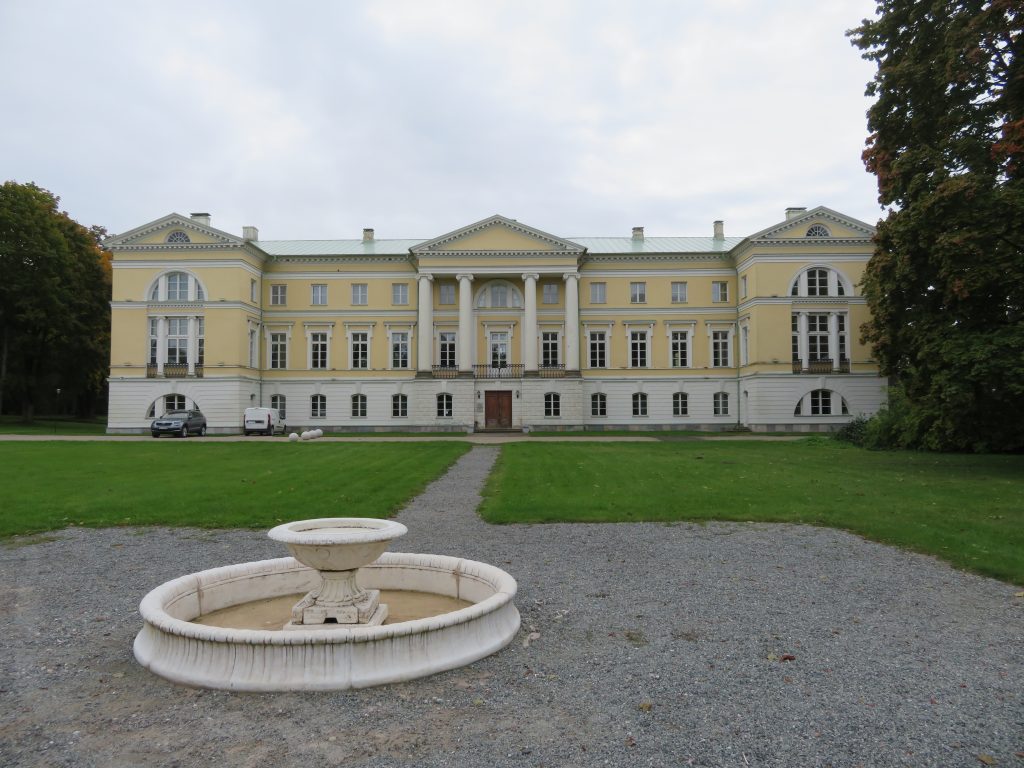 Much the same at the back 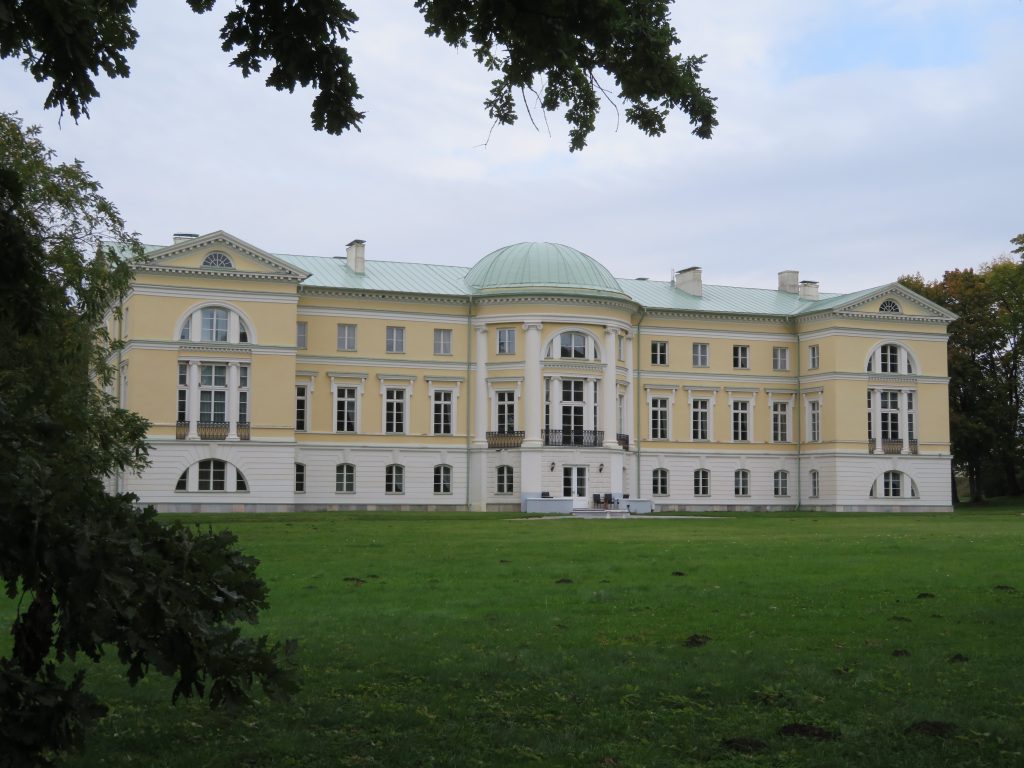 The stream on one side of the estate 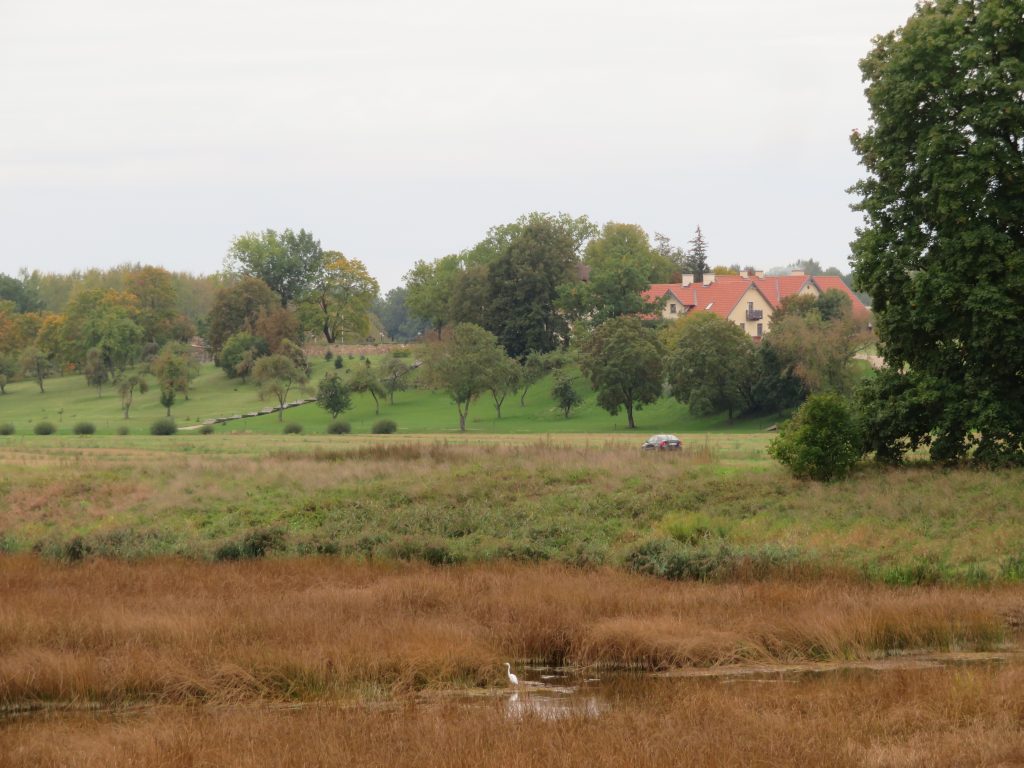 Next stop was Bauska Castle. This has undergone extensive renovations (some parts were still under refurbishment at the time of my visit in September 2019). It has been so heavily refurbished there are hardly any remnants of the old castle – everything looks too new with little character. There weren’t many furnishings in the rooms and most of the information plaques weren’t in English. I much prefer castles that are set up to how it looked like back in their heyday. Probably why I like Kreuszenstein castle outside Vienna (which I’d hoped this castle would be similar to). 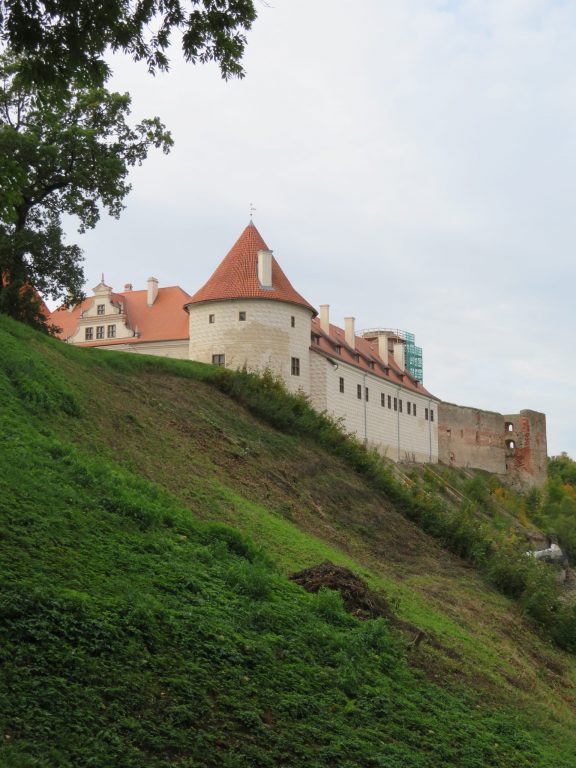 There wasn’t much to see in this castle – it was very small with mostly empty rooms. Those that did have furniture only had a few old artefacts or just 1 table. There were so many attendants – a different one to hole punch the ticket for the 5 different sections of the castle. A lot of the rooms were locked off to the public. In one part we even had to wear hospital booties over our shoes. Overall the inside was very disappointing. The best part was the clean toilets! 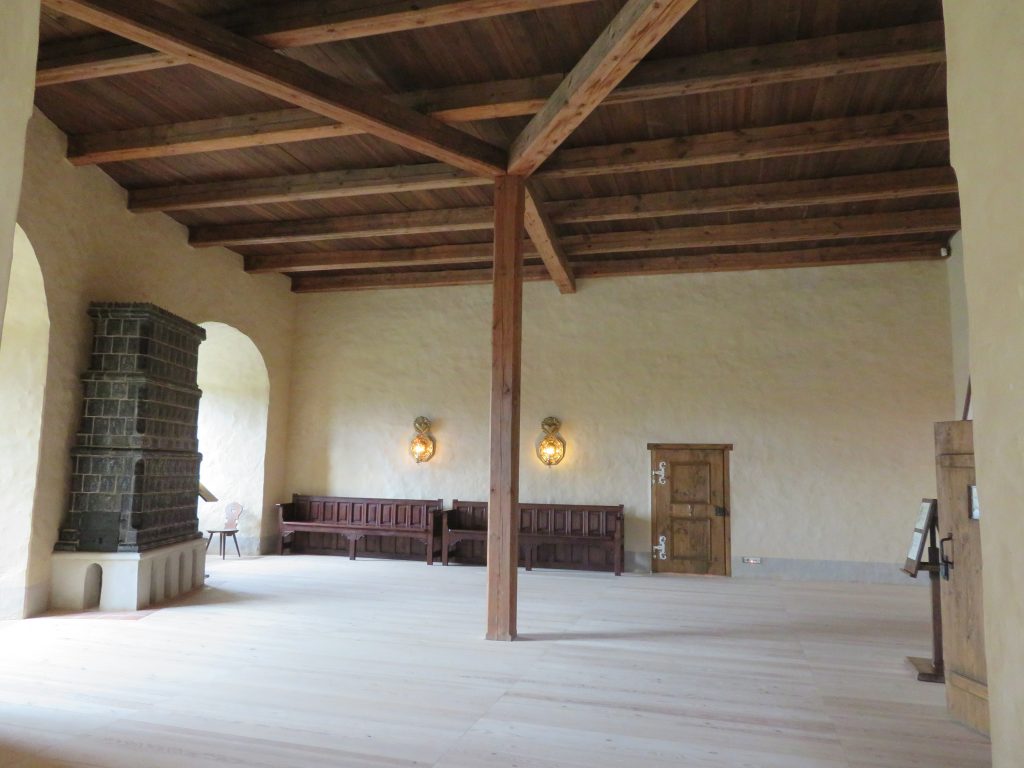 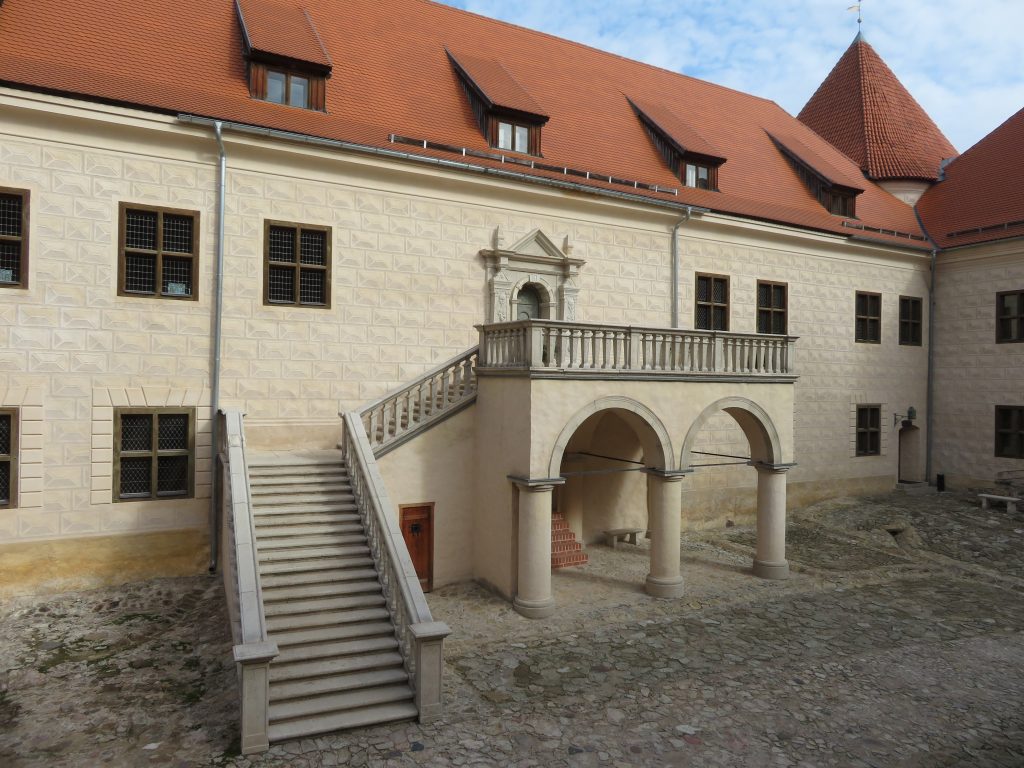 I wanted to go up the tower as I’m sure it would’ve had a good view of the 2 rivers merging (the castle is situated between 2 rivers) but this was under construction. 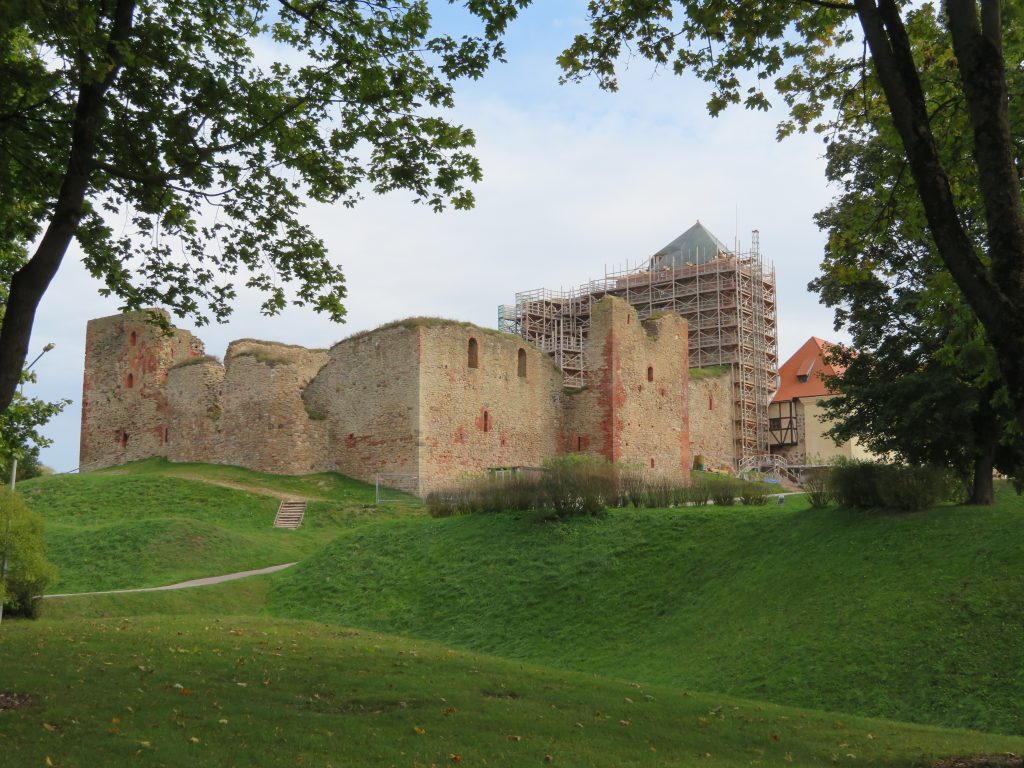 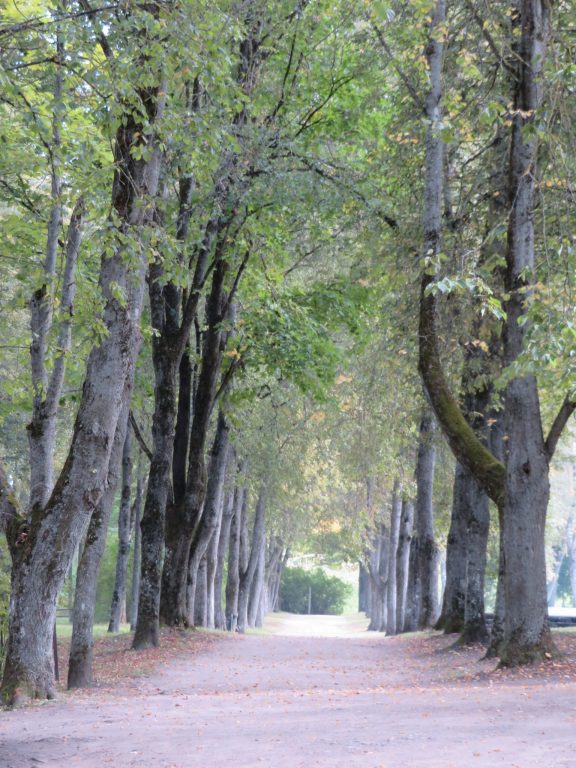 The entry fee was 4 euro for adult, 2 euro for students and seniors. It’s free to walk around the grounds. I was hoping for Autumn colors but was sadly too early (visited the last week of September). There are plenty of tree-lined paths.

We spent about an hour walking around inside the castle and the grounds outside. 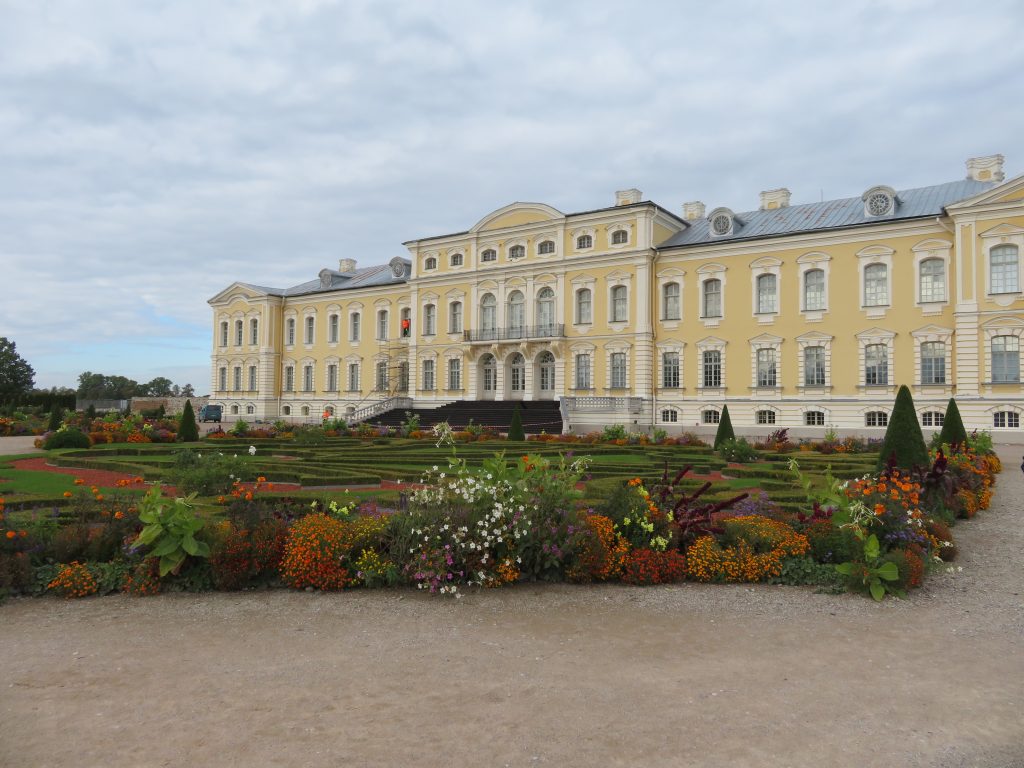 After Bauska Palace we drove through the town of Bauska. We didn’t stop but it would’ve been a good place for lunch as I saw quite a few food places that looked promising outside the van window. But no… the driver just kept on going. We drove 10 minutes to Rundale palace then asked where the lunch stop was. Ryniv or Rynov was the drivers name. His English wasn’t very good which was disappointing given when you book the tour it says they speak English. He didn’t make conversation unless we initiated. He was a good at driving the van, but he wouldn’t have talked for more than 5 minutes the entire day.

He didn’t give us a run-down on what was happening / the schedule for the day. When we asked about a lunch spot he was like ‘oh, I didn’t know you wanted lunch’ … um WTF it was like 2pm by then. Then he said just have something at the palace (of course… probably got a kick back). he probably wanted to get rid of us so he could go for his lunch – there was a guy waiting for him in the parking lot.

He did not have the right personality to be a driver for tourists. Taxi driver maybe – but not for a tour company. I don’t think the tour companies in Riga care about customer reviews, Tripadvisor etc. the tour we did was the only one that offered visiting all 3 castles from Riga – they know they have the monopoly.

… Anywho, getting back to Rundale Palace. I didn’t like the menu at the palace – too may soups and mushrooms and duck liver and other weird things. My mum and sister ate the mushroom soup from there and said it was really food and the prices weren’t too bad – around 10 euro.

While they were eating lunch I was going to wander around the gardens taking photos since the sun was in a great spot. When I asked if I could come back to the gardens a second time later on, a very stern lady at the ticket booth was like ‘NO, one time visit only’… ok lady. The place is deserted, it’s just gardens so it’s not like coming back would create a queue or anything. This is just one example where I found the people in Latvia weren’t particularly friendly.. they were happy to take the tourist money but didn’t seem to want the tourists that comes along with that.

Anyway, Rundale Palace was the main reason for doing this day trip. Yet another palace that reminded me of Versailles! It’s where they filmed the Catherine the Great miniseries. 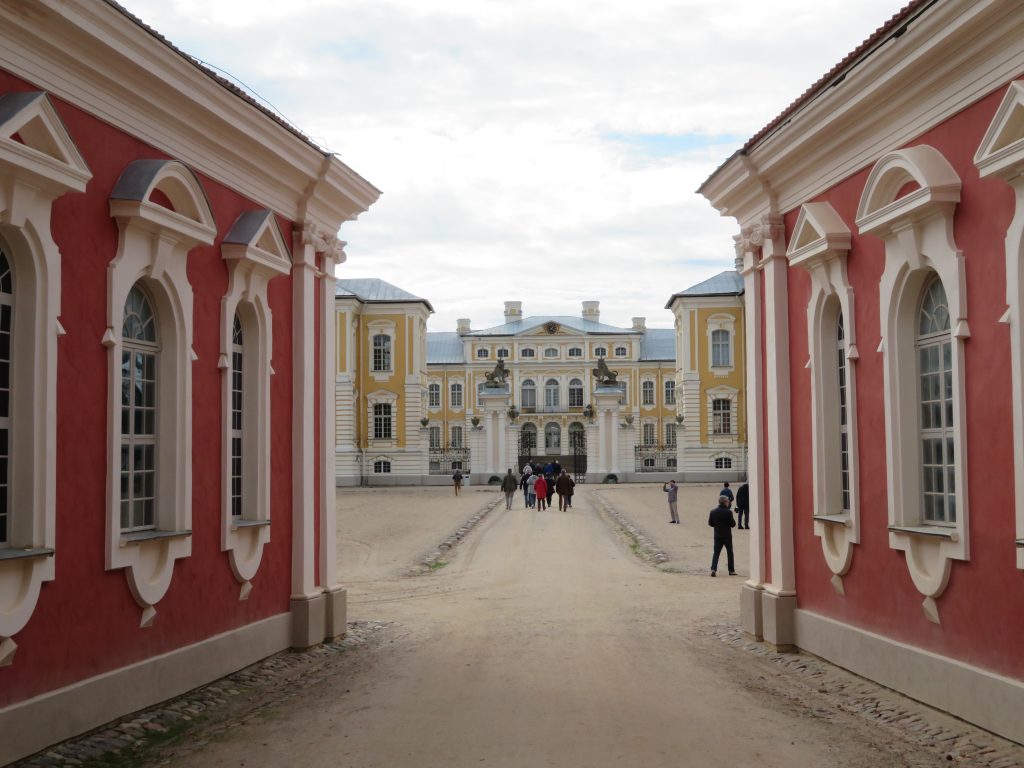 Empty courtyard at the main entry? This would never happen at Versailles 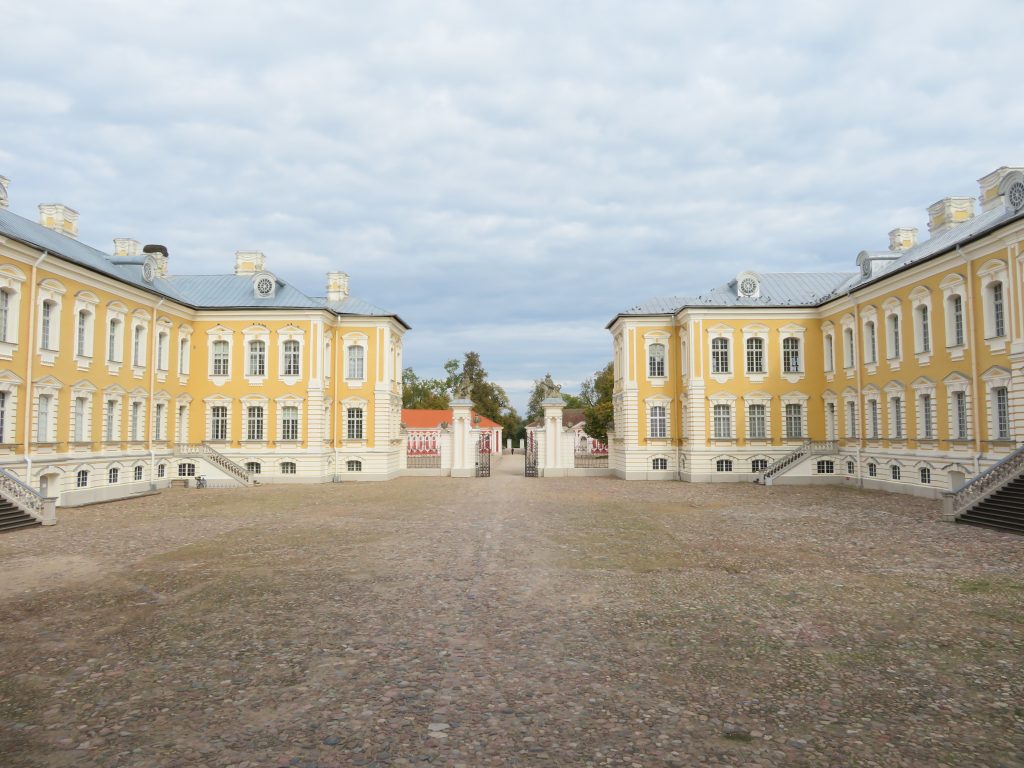 The rooms inside were nice but obviously not as spectacular as Versailles. It was so nice being able to go through all the rooms without hordes of people though.

The architecture looks similar to Russian palaces as the architect also designed the Winter Palace in Russia. 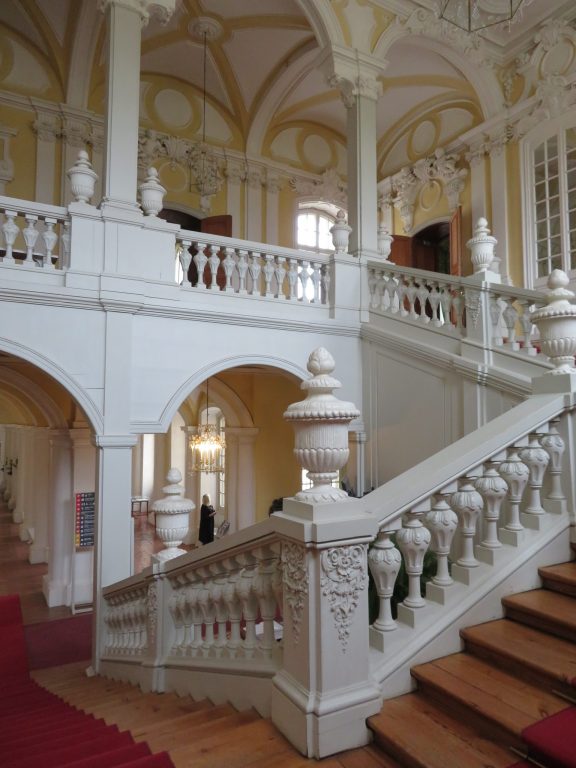 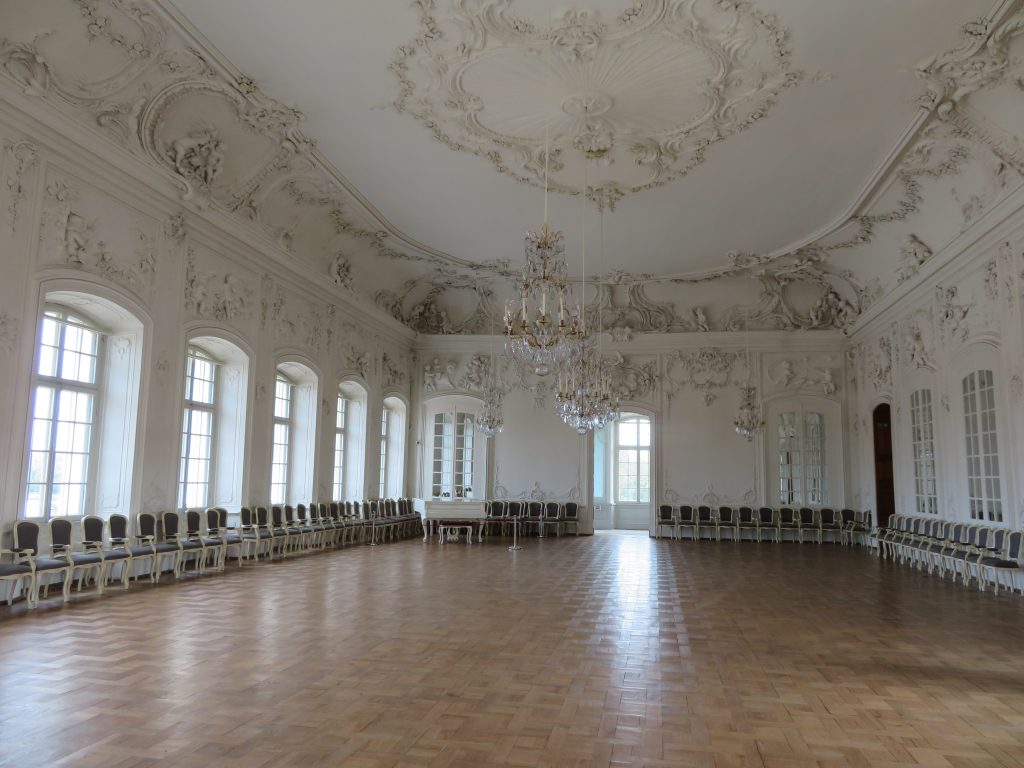 There were lots of priceless porcelain vases (this is just a few of them!) 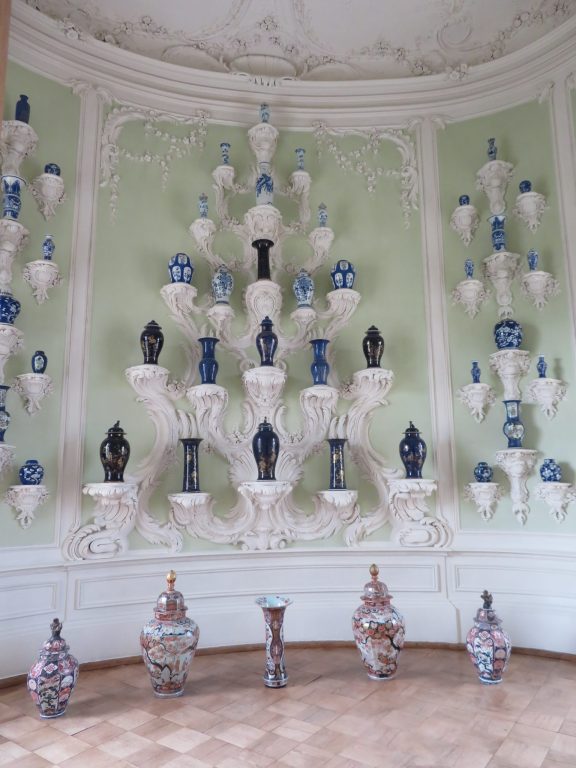 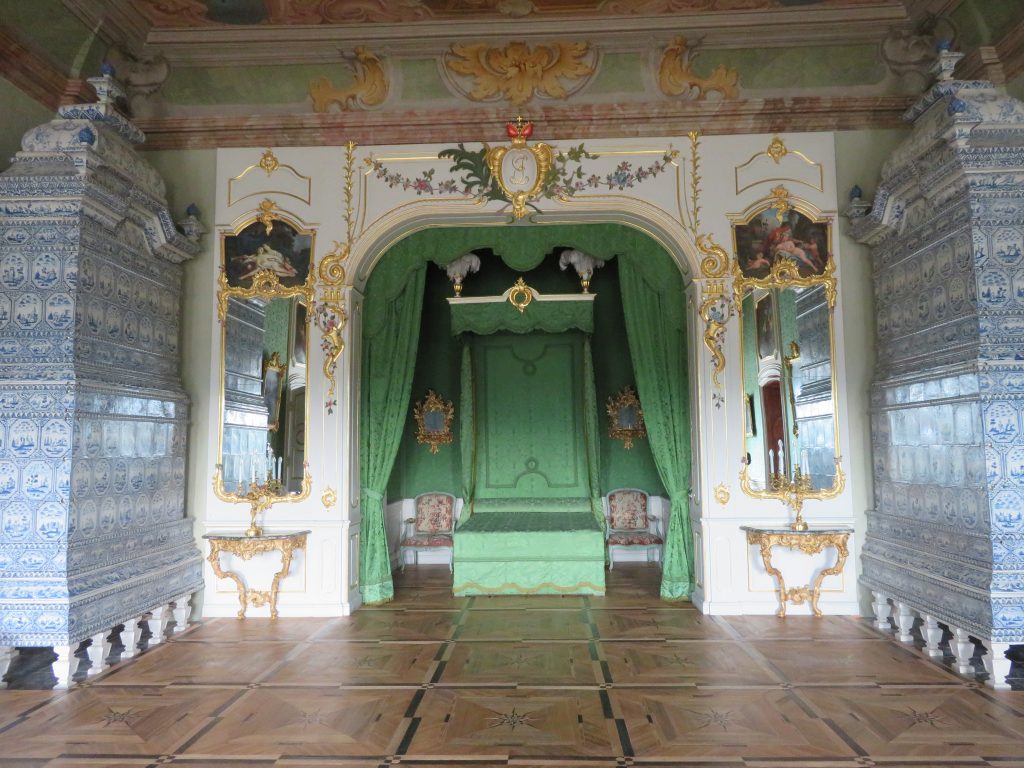 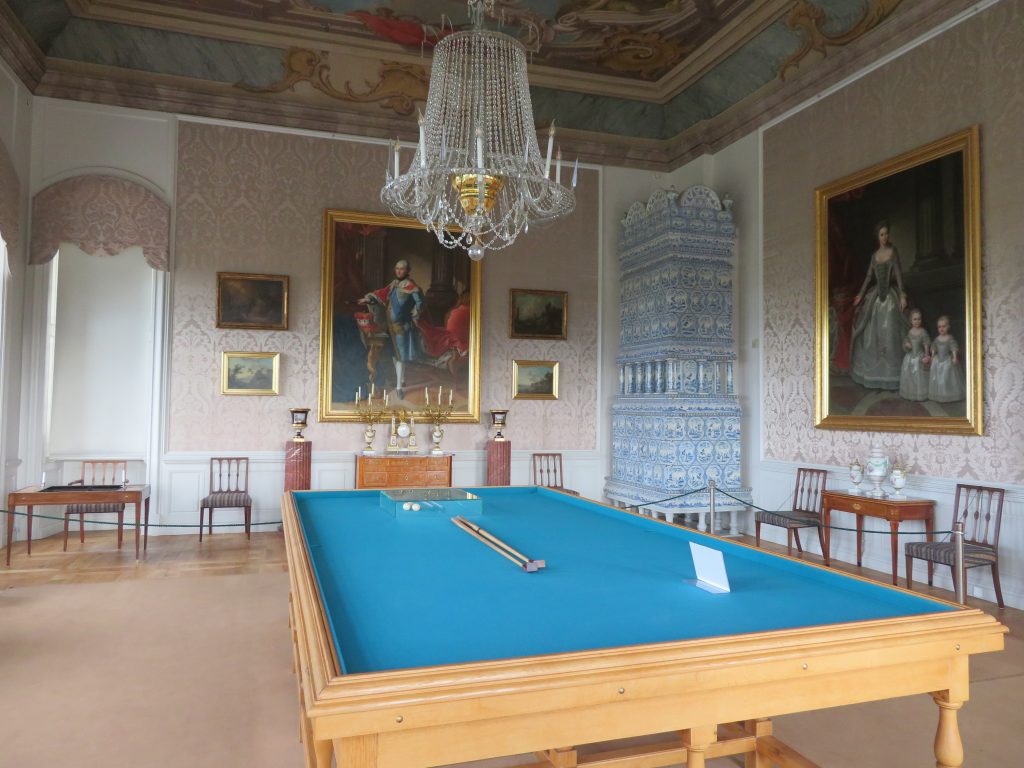 The gardens were like a very miniature replica of Versailles. The palace was way smaller too but had a similar central courtyard. There was a long and short route around the inside of the castle. Since Latvia isn’t overrun by tourists, the ticket was only 13 euro for the long route (which of course you need to choose to see all the chambers i.e. the good stuff) and the gardens. 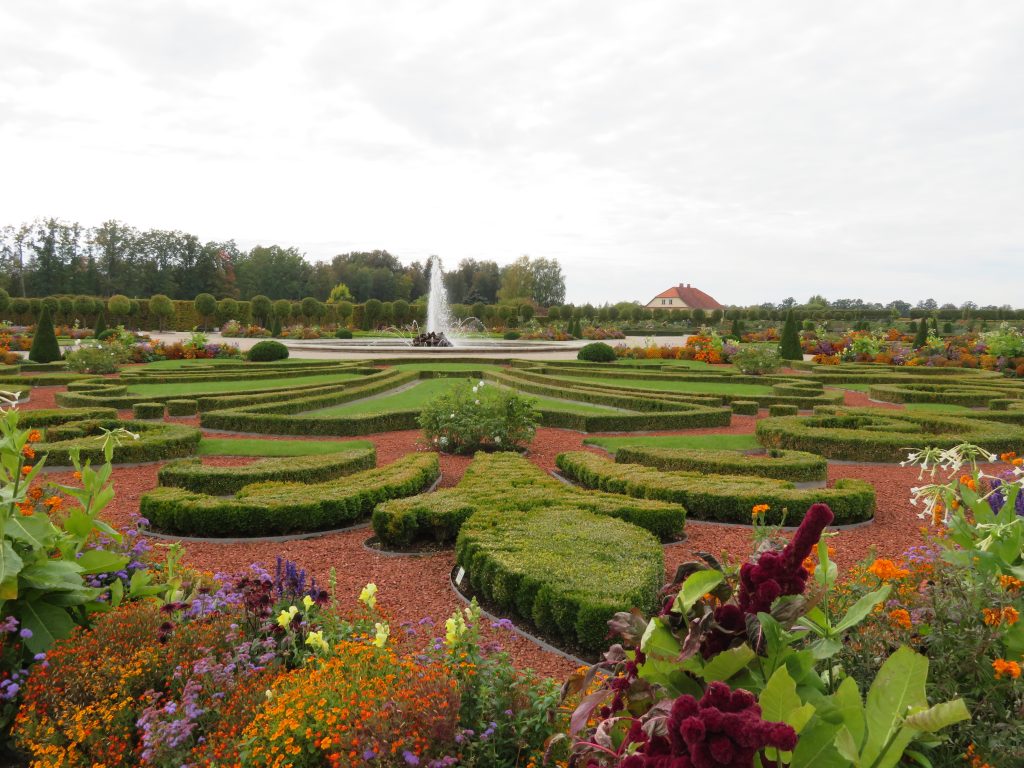 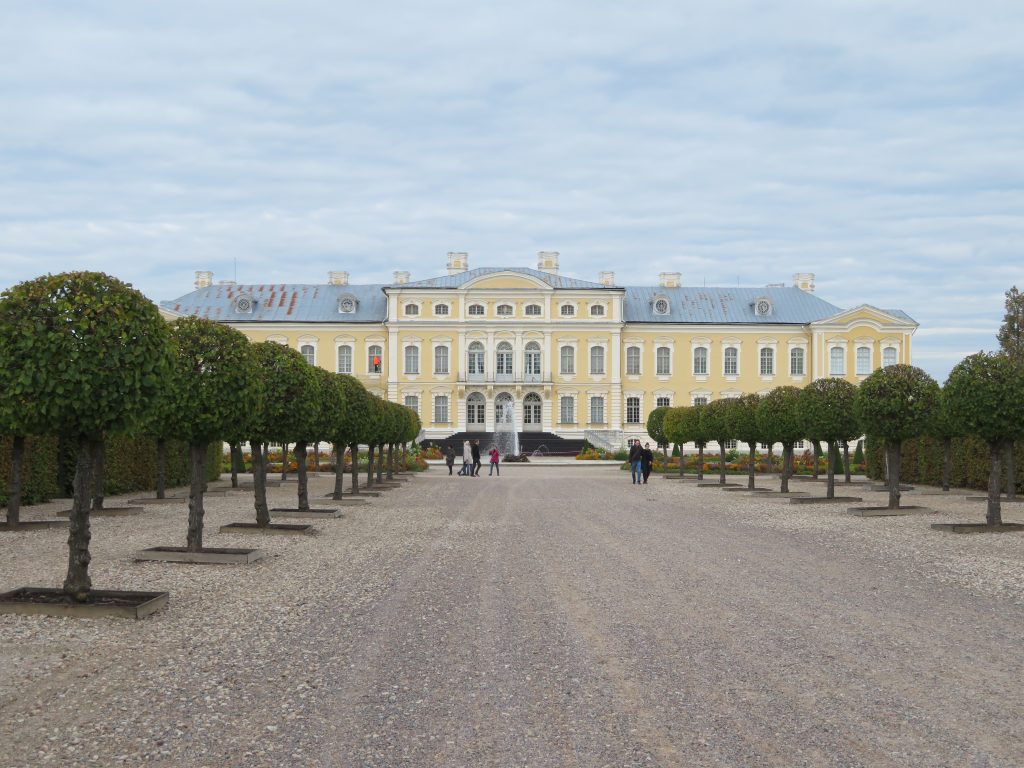 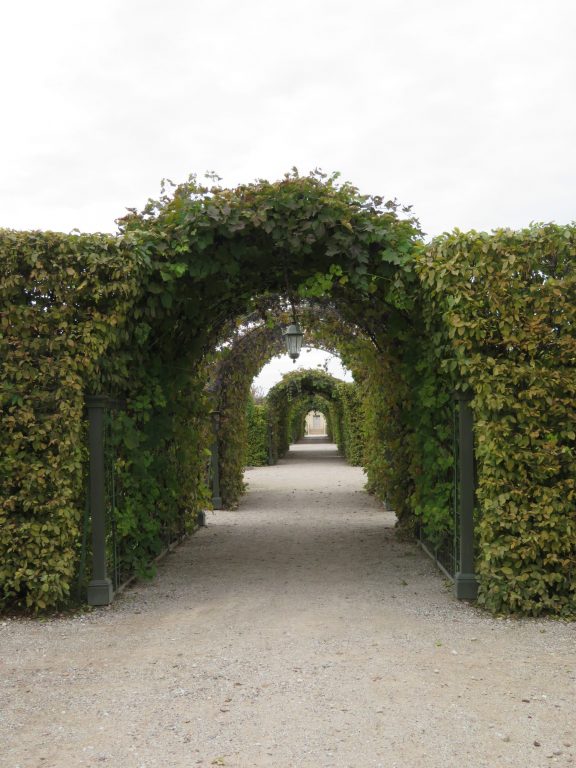 Opening hours vary throughout the year – see their website for dates & times.

Do I recommend this day trip?

If you have time, then yes. Otherwise, I’d skip it. If you were only in Riga for a weekend you could squeeze it in as a half day trip to just Rundale Palace and skip the other 2 palaces – I think that would be sufficient. I liked Rundale Palace but there are other, more spectacular palaces in Europe. If I hadn’t been to Versailles in France and the Schönbrunn Palace in Vienna first, I think I would’ve been more impressed by it.

The tour company we used was Baltic Transfers and Tours. As you can probably tell from my comments earlier in this post, I do not recommend them.

Pickup was from our hotel at 10am, drop-off back at the hotel was around 5pm.

The tour cost $237 AUD per person for a private tour with just the 4 of us. Even though it was a private tour I think it was very overpriced. None of the admission fees to the palaces or lunch was included in that price. Plus they were only a driver not a tour guide, I definitely think we got ripped off.