I’ve had a few readers email me over the years saying they wanted to take my courses for making printables in Microsoft Word, Microsoft Excel and most recently, making digital planners and notebooks in Microsoft Powerpoint. However they have a Mac not a PC. I don’t have a Mac, however if you do have a Mac you can still use Microsoft products. You can also use Microsoft programs online if you don’t want to purchase and install software on your computer.

I am not affiliated with Microsoft, I just like their software.

Go to this webpage: https://www.office.com/

If you don’t already have a Microsoft account you can create one by clicking on the ‘Get Office’ button. All you need is an email address. Best of all… it’s free to create an account! 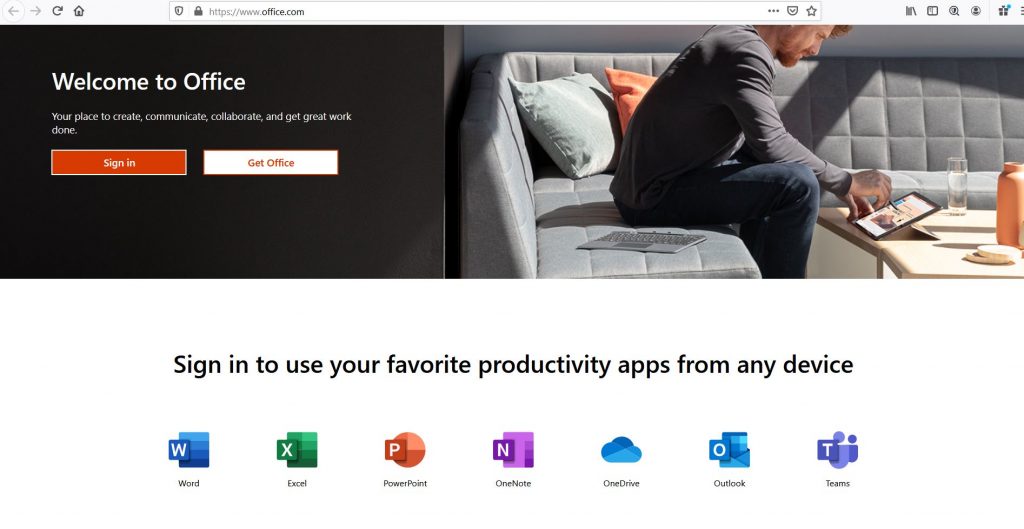 On the page after creating an account will be most (not all) of Microsoft’s Program’s. The 3 we care about (the ones I use at the moment for making printables and digital planners) are all listed here 🙂 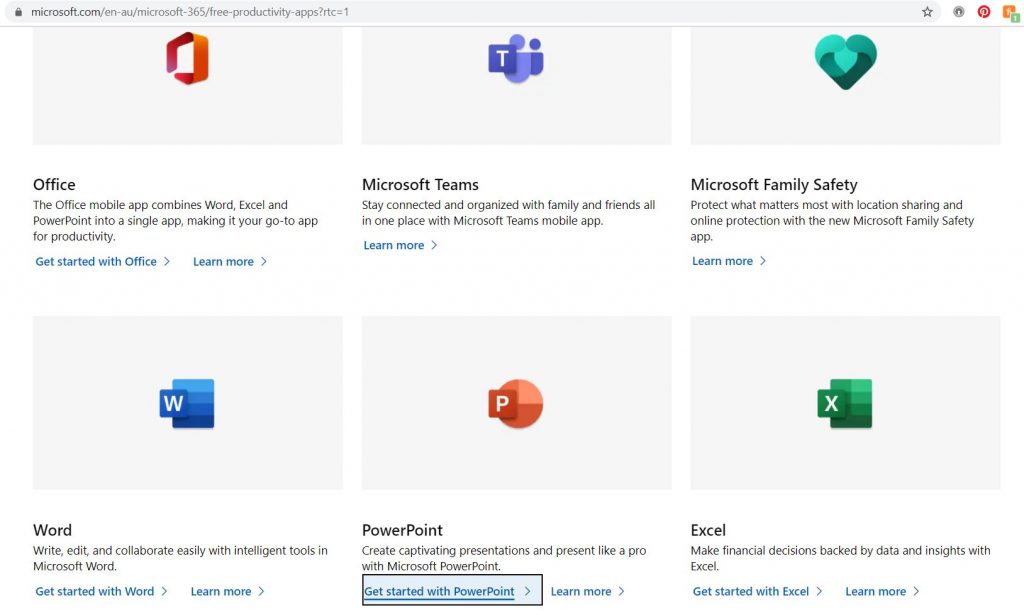 Let’s use Microsoft PowerPoint as an example (this is the program I use to make digital planners and notebooks).

Now you can start designing just like you would if you had purchased Microsoft Office. The only difference is that you’re creating online and saving to OneDrive instead of saving directly to your computer. You can access OneDrive from your iPad or other device that you want to use for digital planning. You can also email the files to yourself after you’ve finished designing, and then download them from your emails to your device.

Here’s what Microsoft Powerpoint looks like in the free online version:

Here’s what Microsoft Powerpoint looks like on my computer

As you can see – they look much the same. The main difference is that the online version compresses the top toolbar. There is a dropdown arrow beside most of the tools and when you click on that you’ll see the rest of the options. For some of the tools (like the textbox tool), once you click on the tool it’s secondary menu appears. If you want to get rid of this function, click on the white oval beside ‘simplified ribbon’ and it’ll give you the option to switch back to classic view. Now it looks the same as if you had the program installed on your computer.

I’ve tested the free online version on both my laptop and iPad – they look exactly the same. While you could design on your iPad or tablet I don’t recommend it. It’s much faster to design with a computer mouse and physical keyboard than using your fingers to select the buttons and using the on-screen keyboard.

After experimenting with making something in the online version there are a few limitations I came across.

One is that custom fonts I’ve downloaded (see this post for a tutorial) do not appear (which makes sense as you download and install those on your computer). In the free version there are a few other fonts – you don’t only have to use Calibri. I’m guessing (not confirmed) that the paid version might have more fonts to choose from. 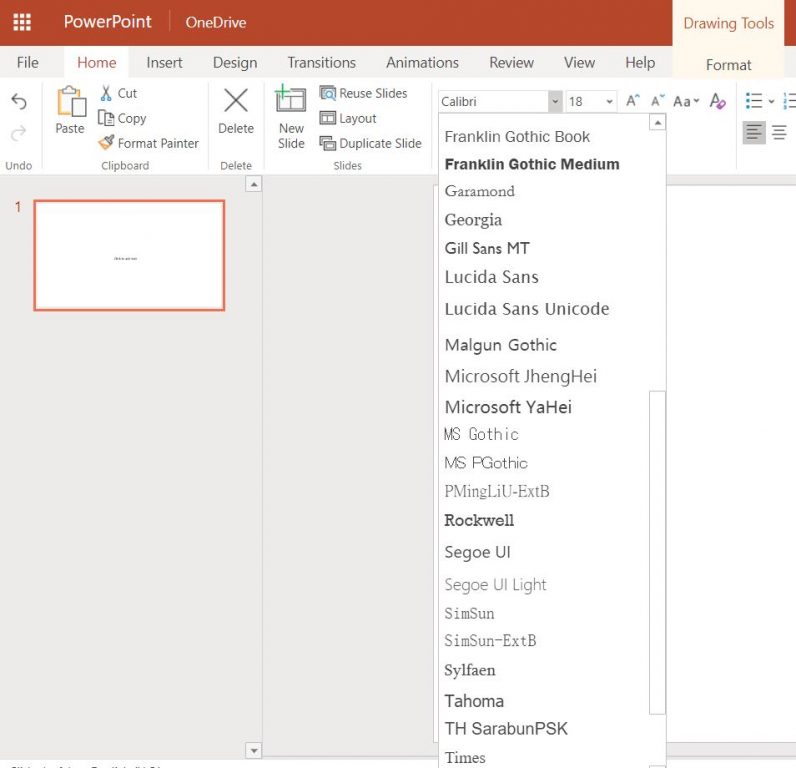 All of the other tools that I use for designing are still there in the free online version EXCEPT the tool I use for linking everything when making digital planners and notebooks. This only appears to work if you link text. In the desktop version I can link shapes and images as well. The function to link shapes and images might be part of the Microsoft 365 subscription i.e. the paid version (which costs $10 per month which, while not free, is still cheap). Since I already own the software I don’t have the online paid subscription (the premium version) to confirm if the linking function is the same as the paid desktop version.

Something a bit extra that I noticed is included in the online version but not my desktop version (mine’s from Office 2016 so this could also be why), are icons. There are surprisingly quite a few free ones.

Any with a diamond in the top right corner of the image are part of a 365 subscription which costs $10 per month.

There are heaps to choose from and there’s collections sorted into themes like home, holidays, sports, vehicles, food and drink, animals, people, symbols etc. These icons would look cute on a printable – especially checklists! 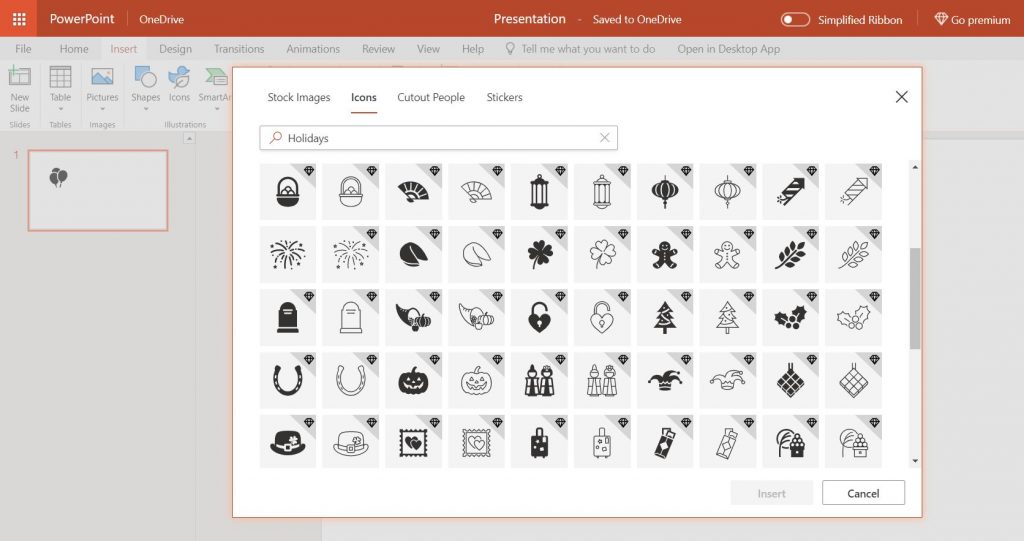 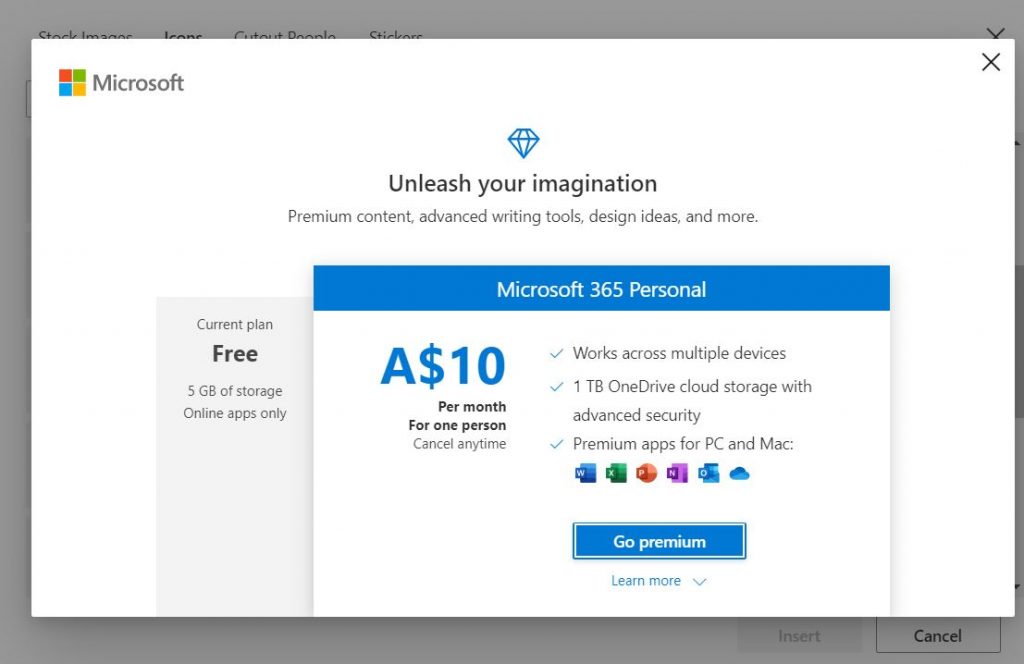 If you’re wondering if there are differences between Microsoft Word and Microsoft Excel, they appear to be the same online as they are in the paid desktop version. 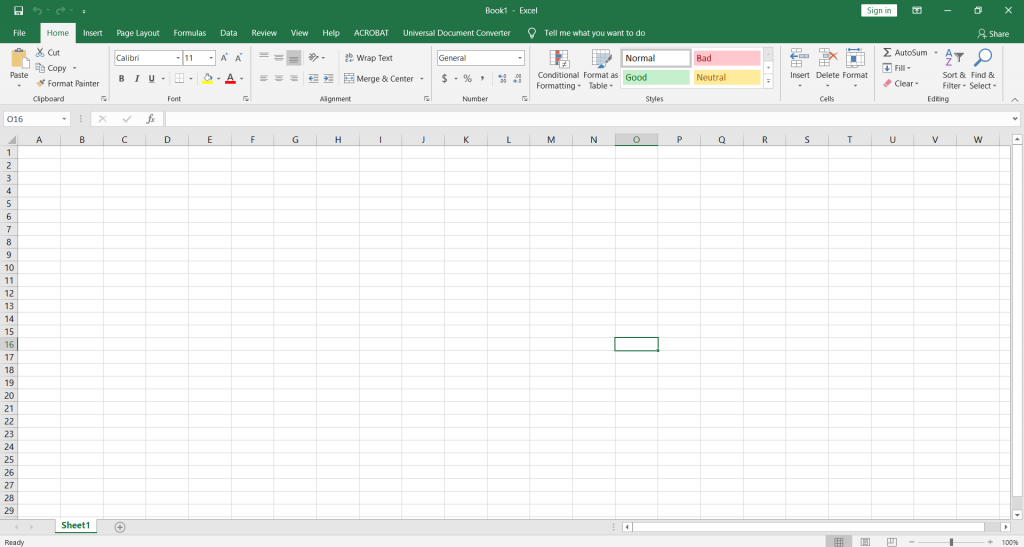 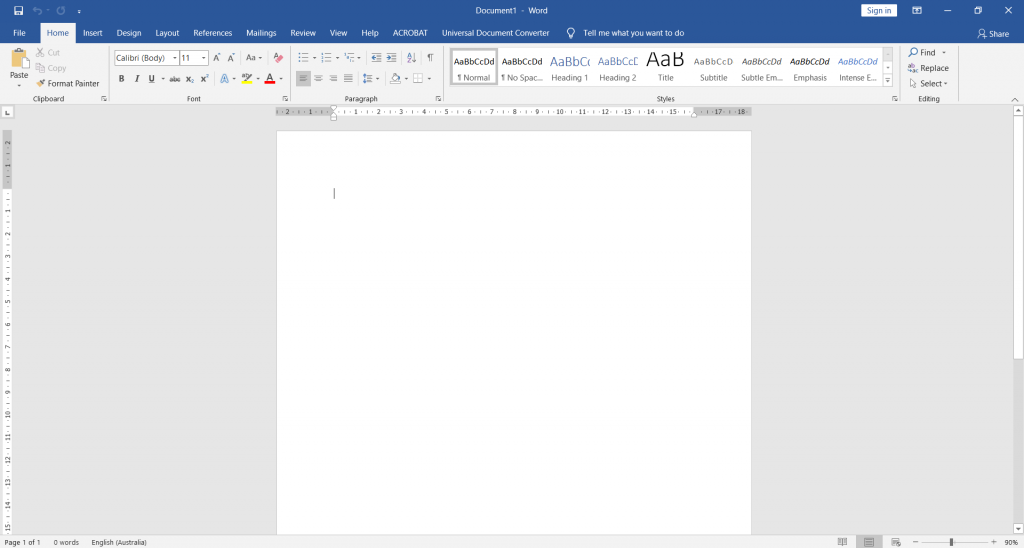 You can switch between programs in Microsoft online by clicking the grid of dots in the top left corner: 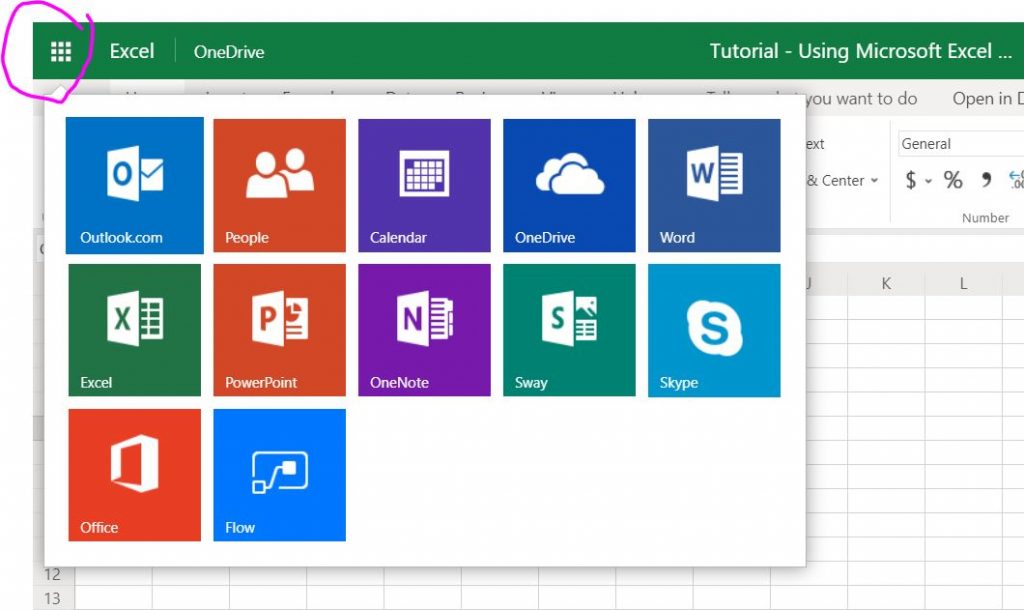 If you have any questions, please comment below and I’ll do my best to answer them.

If you now want to enrol in one of my courses where I teach how to make planner related things using Microsoft Software, here are the links:

How to make printables in Microsoft Word 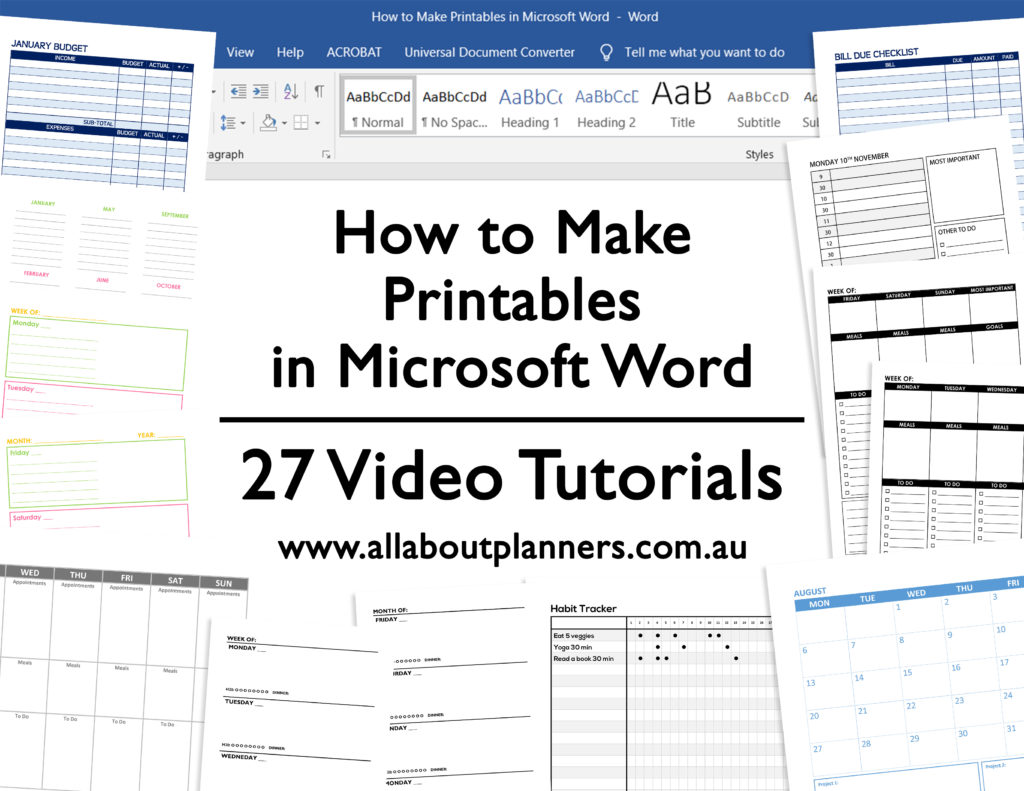 How to make printables in Microsoft Excel 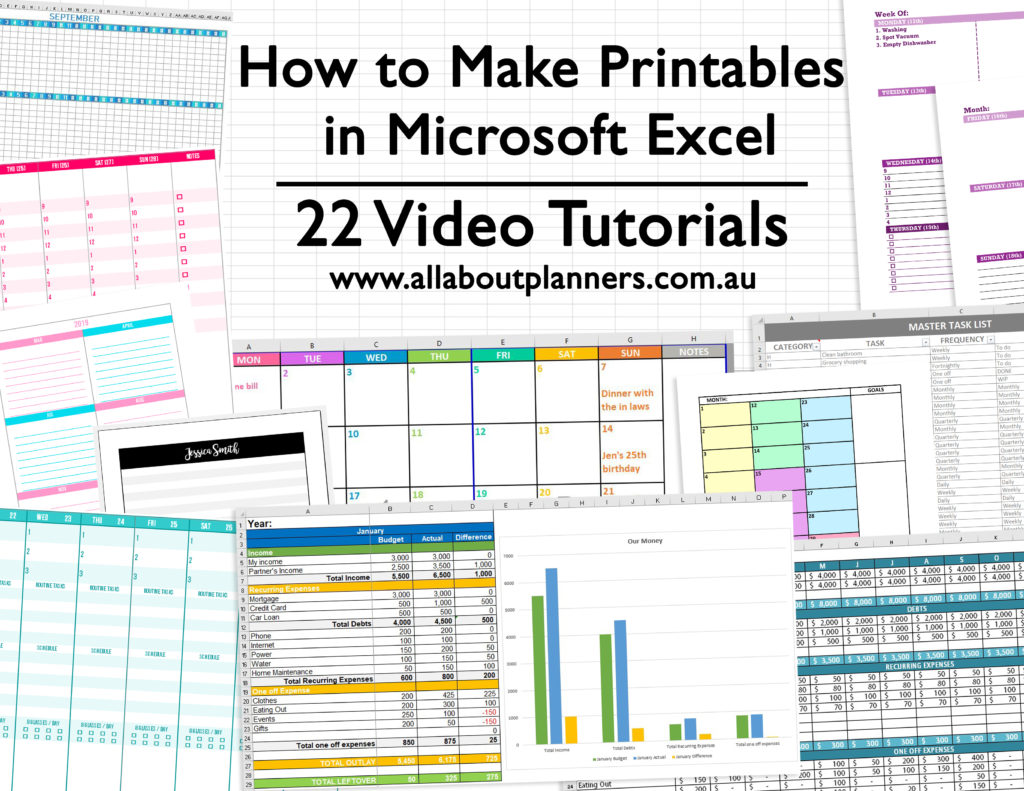 How to make digital planners and notebooks in Microsoft Powerpoint 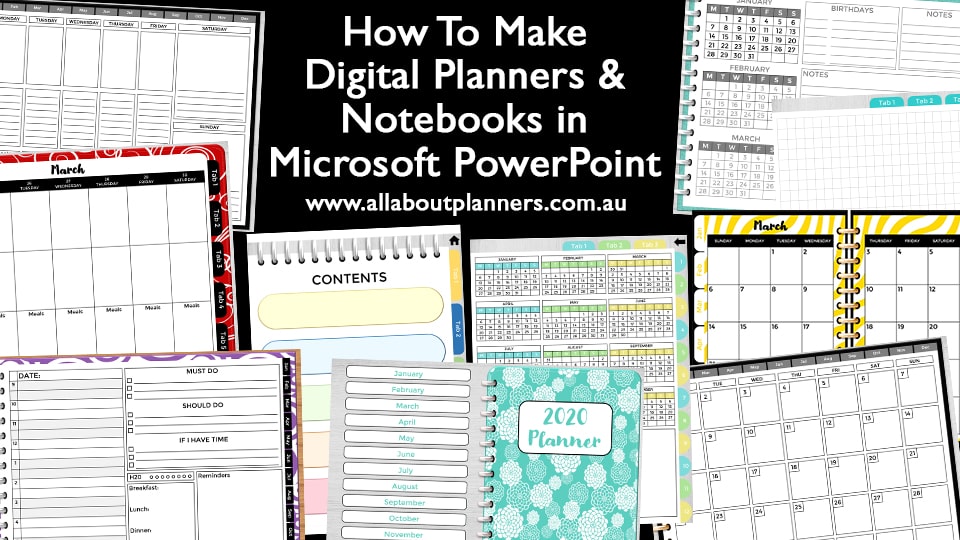