Arriving into Vilnius on the Lux Express bus I remember driving through this neighbourhood on the outskirts of Vilnius thinking the concrete soviet-era buildings looked just like the ones in the Chernobyl TV series. Then I did a TV show filming locations tour a few days later… and found out that was the exact neighbourhood where they filmed!

After picking us up near our hotel, the tour guide (a girl named IEVA) started driving out to the outskirts of Vilnius while telling us many stories not only about Chernobyl, but about life in Vilnius. She was born in a coastal town in Lithuania but moved to Vilnius to live with her aunt (in one of the soviet era apartment blocks). She had many stories and facts, these are the ones I found most interesting (IEVA if you’re reading this, I hope I remember these facts right!)

So yes this tour was great to see the filming locations, but also to hear a Lithuania local openly talk about something that was never discussed in history class in school here in Australia.

Some of the TV show was filmed in Ukraine and other locations like ‘The Bridge of Death’ and the nuclear power plant (Chernobyl’s ‘sister’ plant the Ignalina Nuclear Power Plant which was only decommissioned so Lithuania could join the EU… and took until 2009 to finish decommissioning) were filmed in Lithuania (but not in Vilnius). You can do a tour of the nuclear power plant they used to film if you want to… but I definitely wasn’t going to do that or go anywhere near the real Chernobyl.

After story time in the car, we arrived in a neighbourhood called Fabijoniškės (it’s about 5km outside Vilnius’ city centre) which is ‘Pripyat’ from the TV series.

This neighbourhood was chosen as it doesn’t have many tall trees. The Director wanted the neighbourhood to look ‘new’ like it would’ve back at the time of the explosion. Back in 1986, Pripyat was known for it’s roses so most of the existing garden beds in the neighbourhood had roses planted for the TV series, which were then removed after filming ended (which disappointed the current residents!) 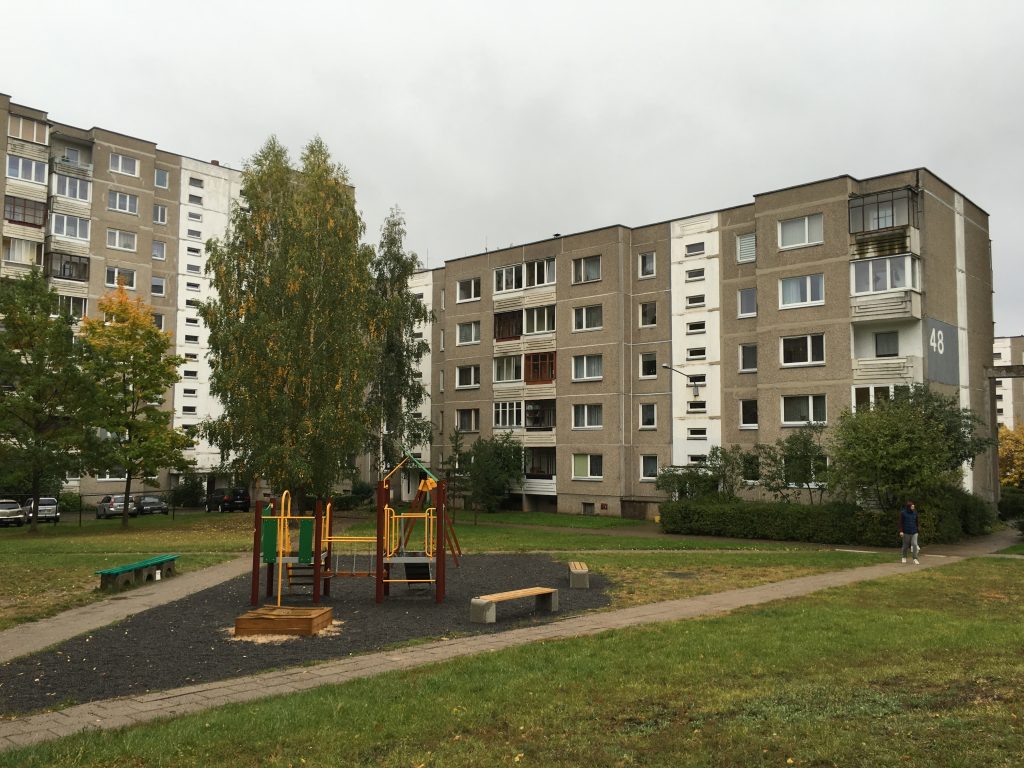 There is a scene in the movie where children are heading off to school so the tour guide had us ‘recreate’ the photo in the same spot they filmed that scene! She was happy to take any photos for us that we wanted and had an iPad to pay clips of the TV show if you didn’t recognise what they’d filmed in that location.

While we sheltered from the rain in a bus stop and the tour guide showed us some photos of the the location setup for filming versus what you see now, a lady in the bus stop overhead us and excitedly told us they filmed the rooftop scenes on the rooftop of the building she lives in. For the scenes where the actors are on the rooftop, apparently they had chains around their ankles for safety. A condition of filming on the rooftop, was apparently upgrading the entire roof when filming finished.

This is the road where they filmed the evacuation scene (one of the main roads heading into Vilnius). They removed the linemarking during filming, then had to reinstate when filming finished. The tour guide told us a story where they asked people to move their parked cars so they could film but there was this one car that wasn’t moving. They traced the car’s owner to a guy in Germany who said he wouldn’t be back for months.. so they towed his car, filmed the scenes, then moved his car back to its original spot with the car’s owner none the wiser.. 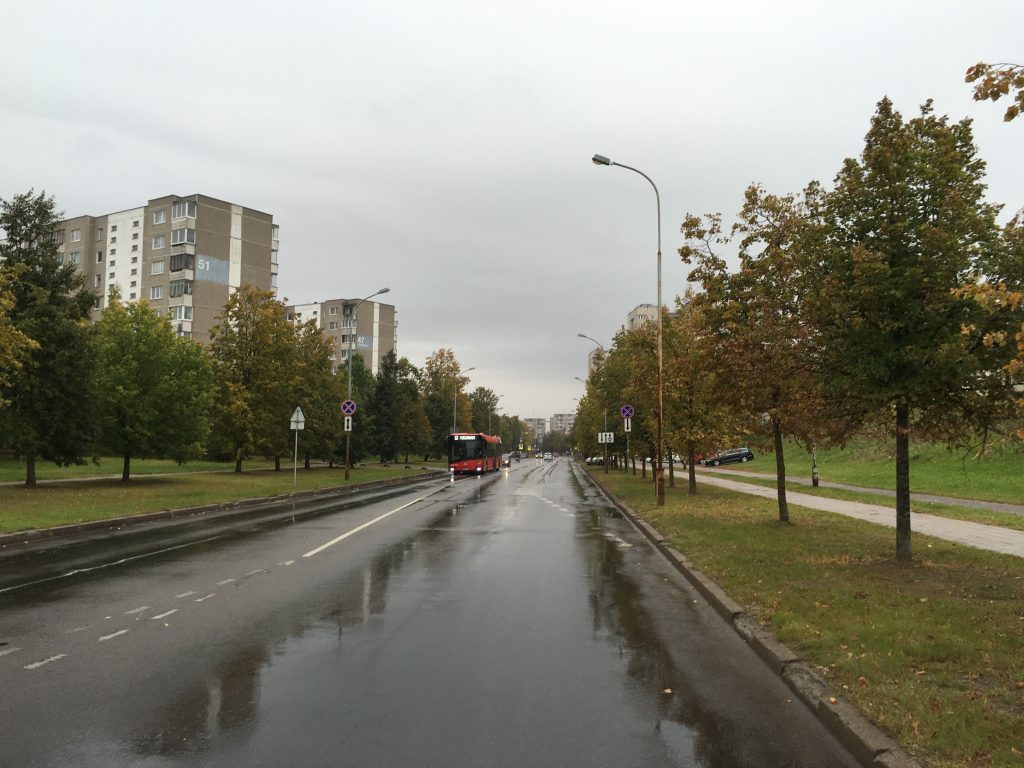 The tour guide also mentioned various Lithuania tour companies were encouraged to visit the filming locations and talk to people on set. They wanted them to have inside knowledge to run these tours and boost tourism in Lithuania. 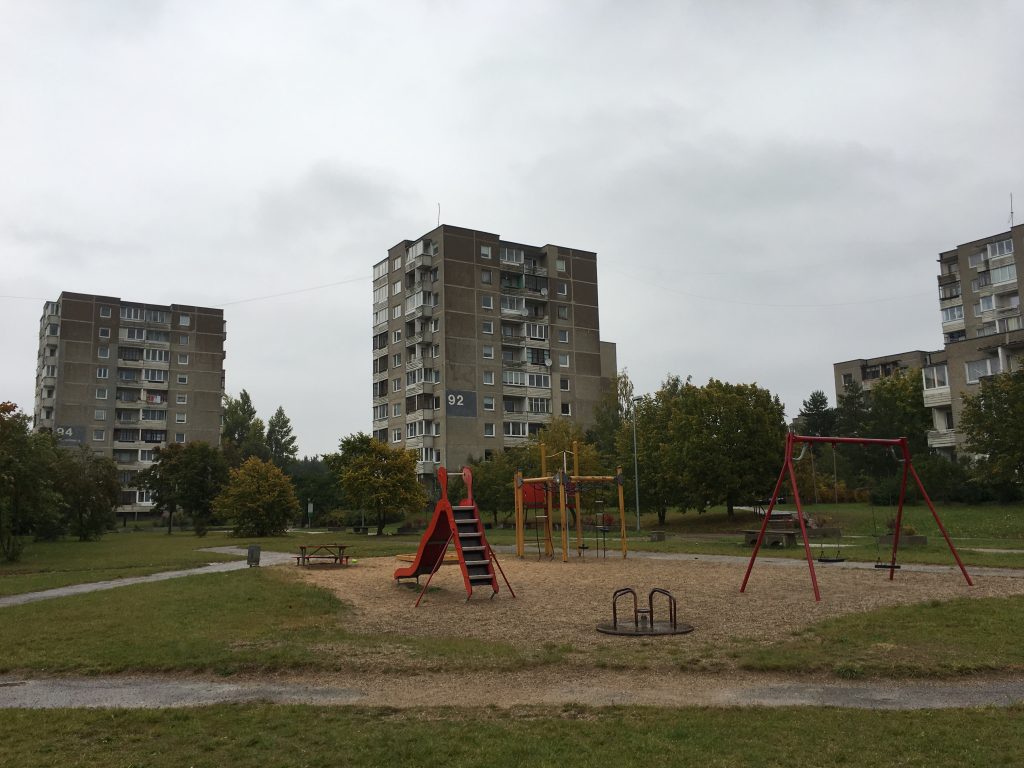 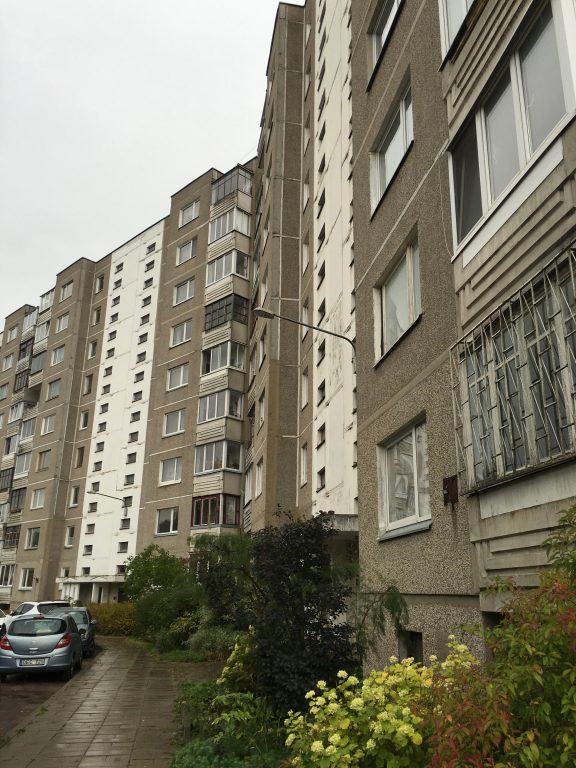 The entrance into one of the building’s… When I asked the tour guide if there were plans to demolish the apartment blocks and build new she said no, they just renovate the apartments inside. 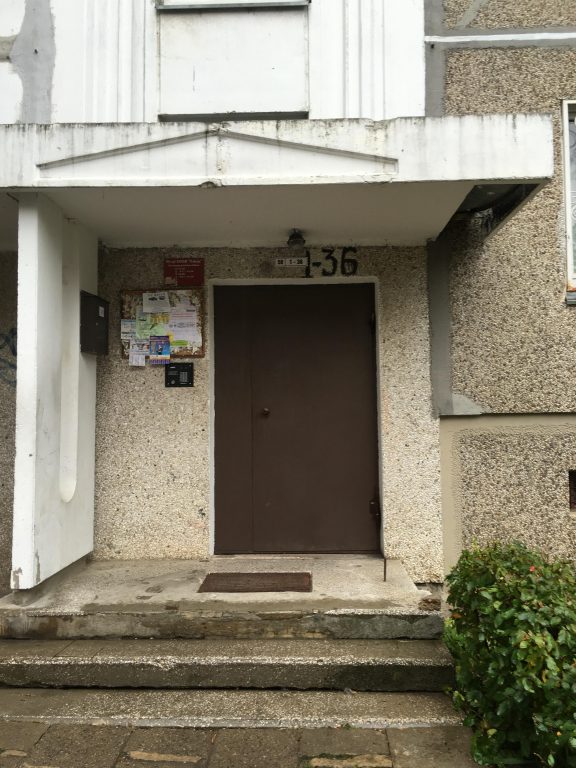 Residents still park on ground level as there is no basement – must be cold bringing the groceries in during the winter. 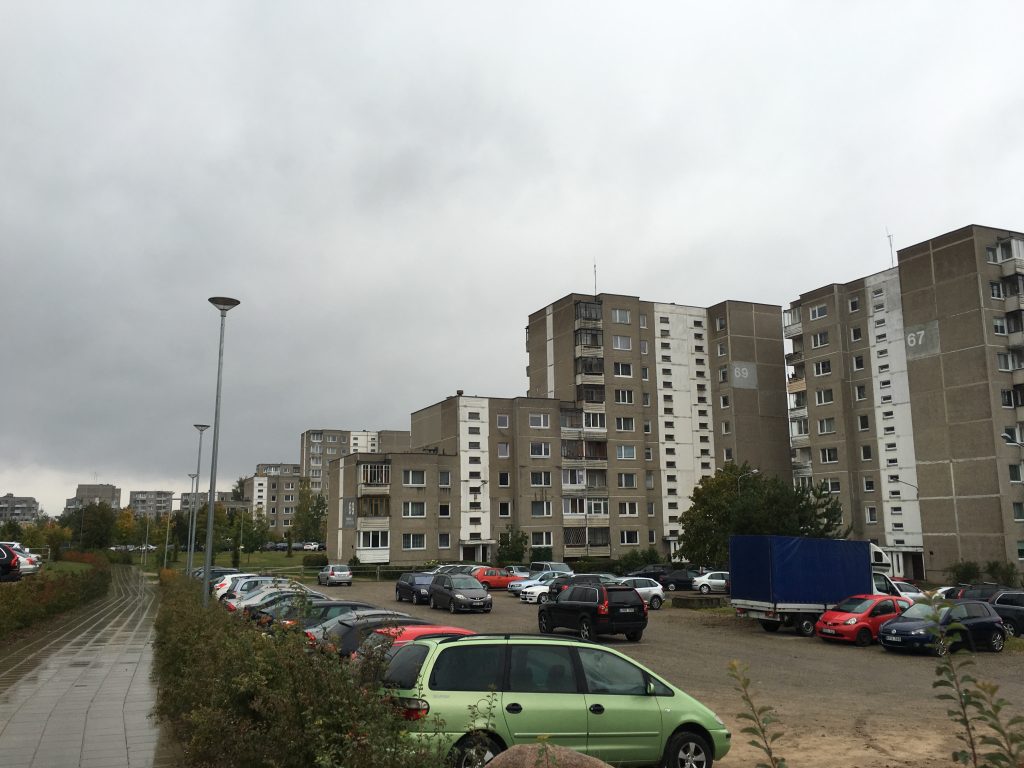 If you look closely, some of the buildings have different facades – this one has a lattice pattern on the balconies. 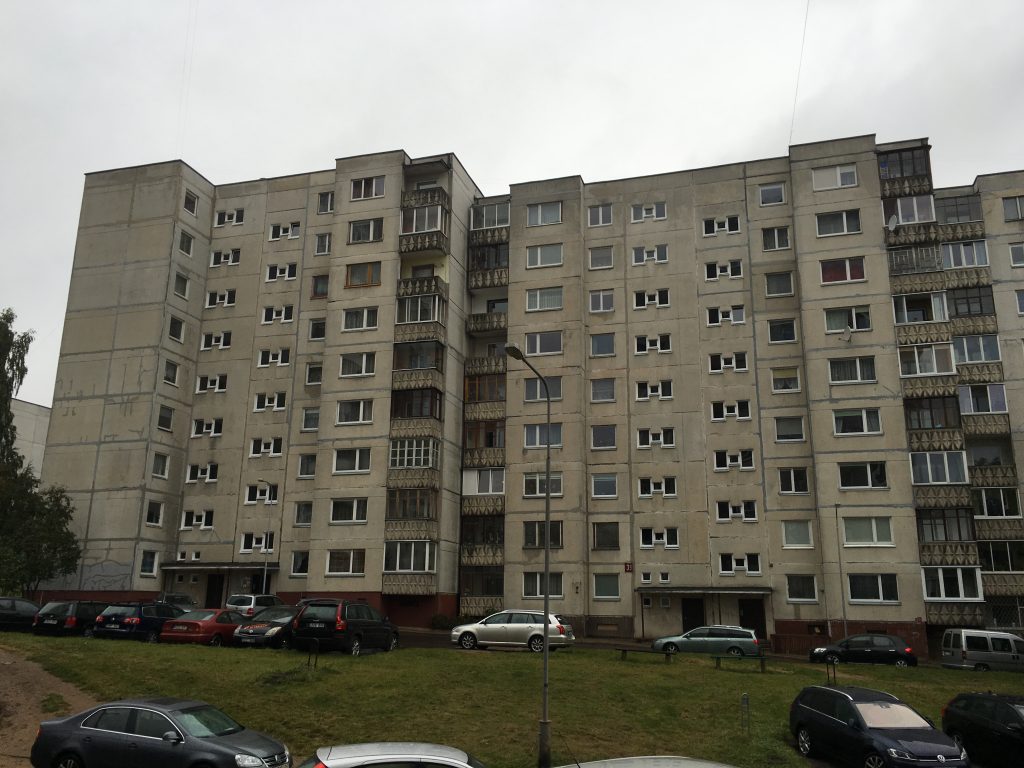 Each building has a number on the side so people can actually find their apartment as the buildings look so similar. 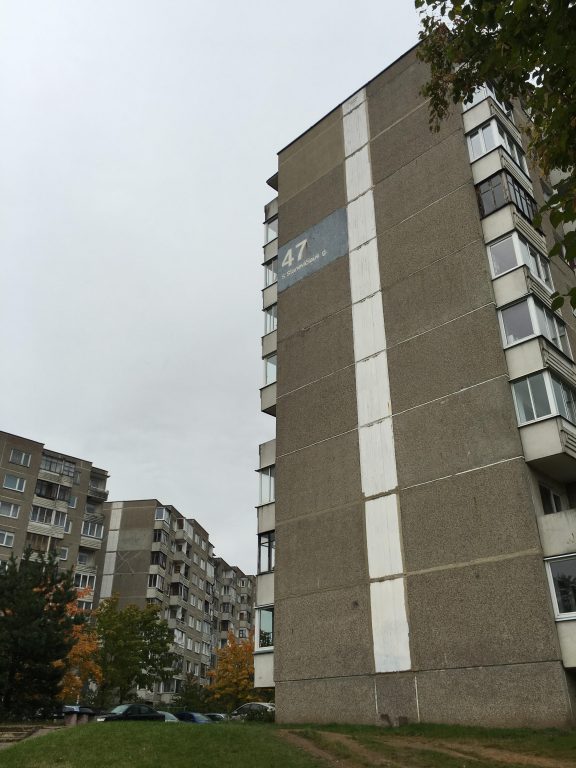 The yellow buildings on the left are what they used for the shops (where they filmed the craft shop scene when they do the rewind to the morning before the disaster). 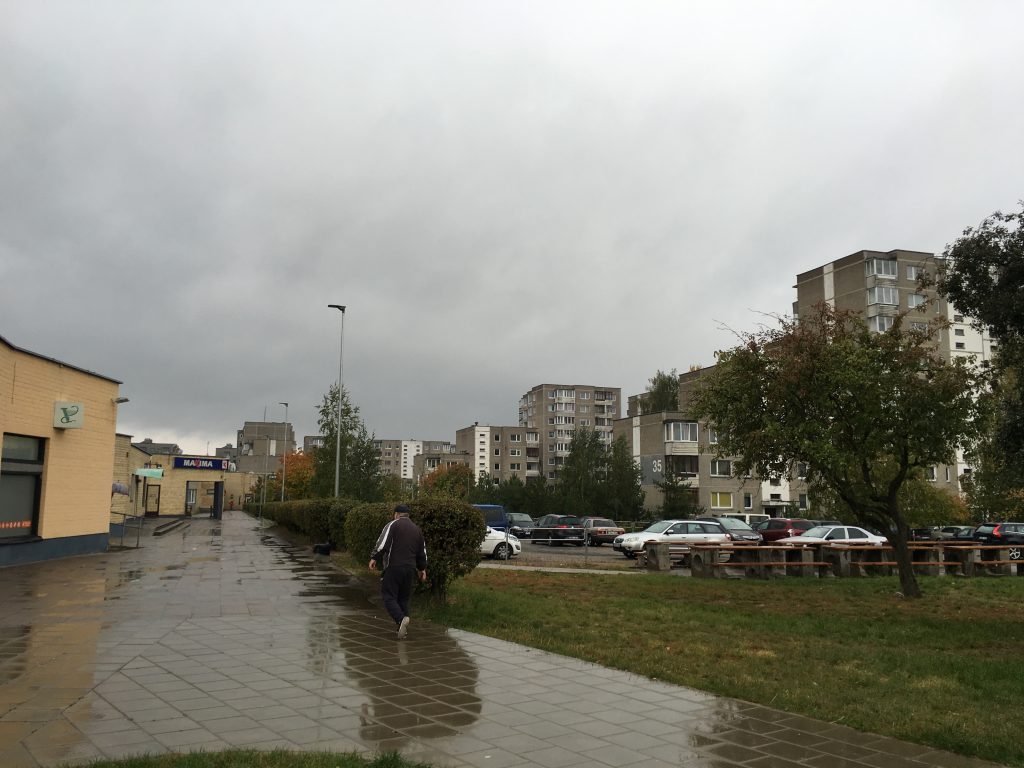 A hint of autumn colors finally making an appearance in late September! 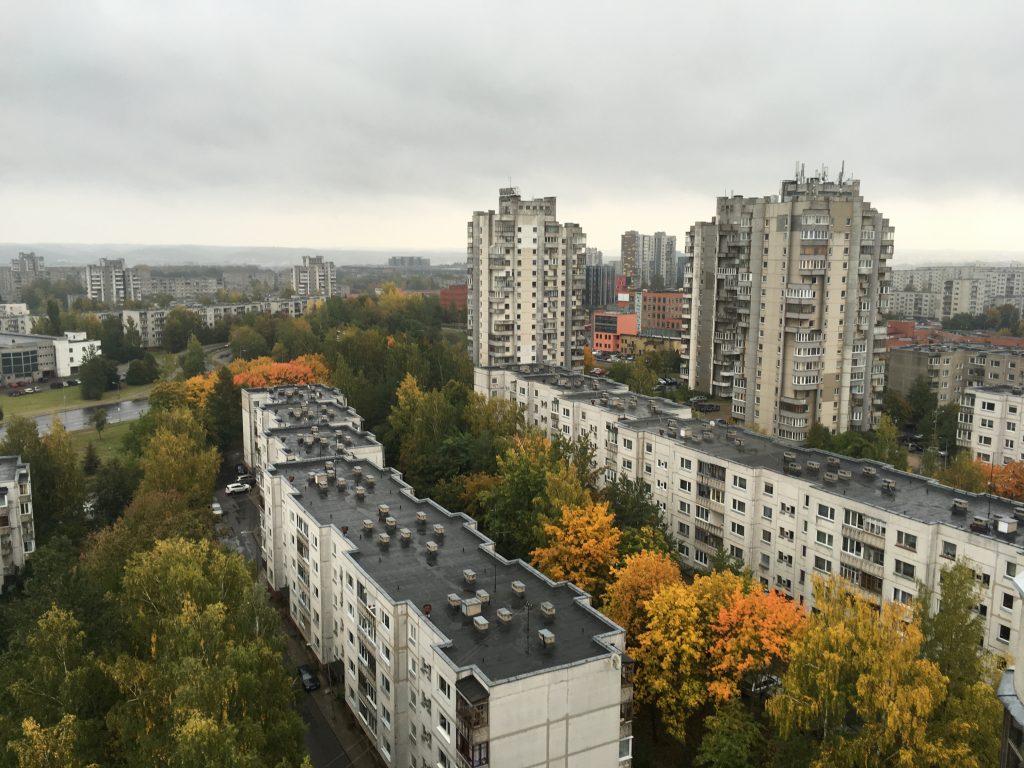 This photo was taken from the tour guide’s aunt’s top floor apartment (it was tiny!) on one of the soviet-era apartment blocks. She said when she moved in she was right on the edge of town (near the Vilnius sign), there were fields where all of the apartments blocks in this photo currently are. Now there are apartment blocks are far as you can see. The tour guide’s aunt was happy to answer any questions we asked about life in Soviet times. I’m not sure if this is a standard inclusion or if we visited because the KGB Museum (another filming location) was closed that day, but it was definitely a nice surprise part of the tour!

If you look to the left (which used to be farmland), there’s concrete apartment blocks as far as you can see (there are even more to the left but I couldn’t get them in the one photo) 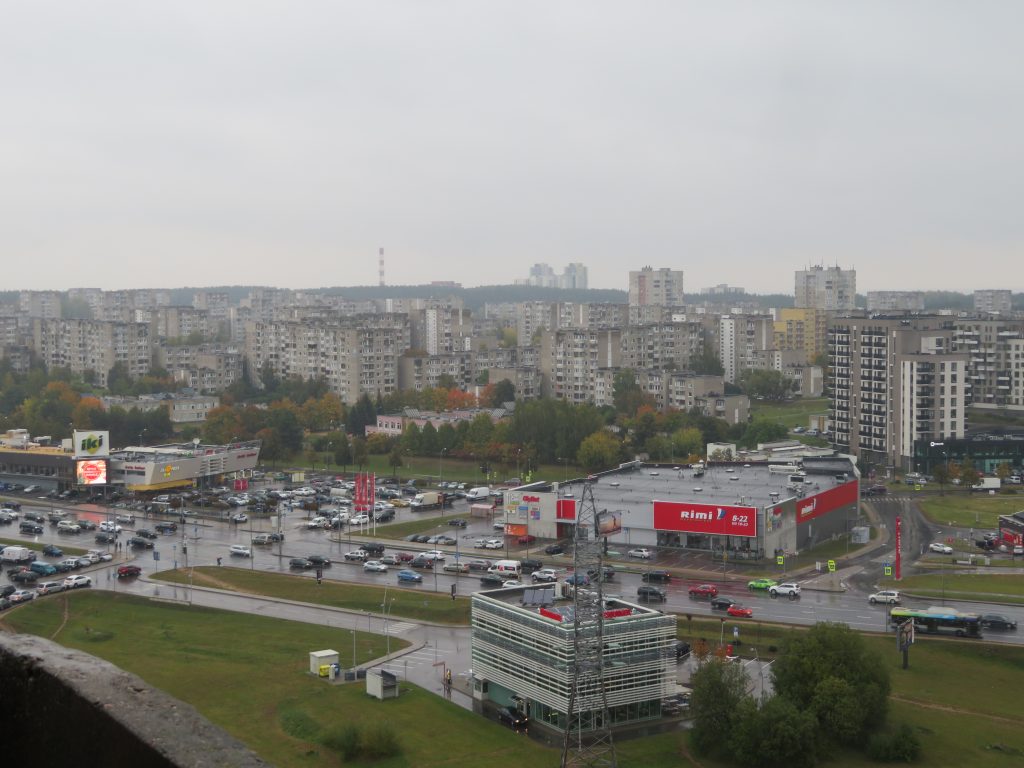 After visiting ‘Pripyat’ we went to an old concrete building where I had no clue what they’d filmed there until the tour guide showed us a clip from the series.

This is the building where the filmed the Pripyat Hotel scenes. They used the lobby as the hotel lobby and set up the bar underneath these stairs. This building is used as a concert hall now. 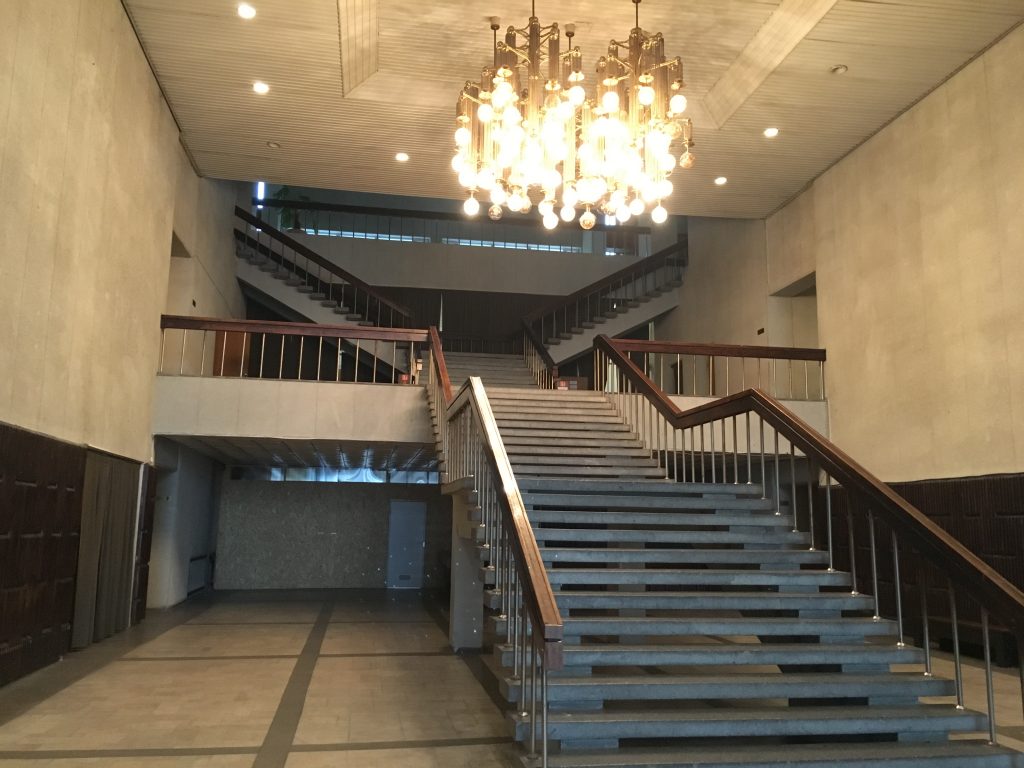 The building maintenance people who went and found the key to the room in the photo below, were very excited people had come to their country all the way from Australia and insisted we peek into one of the concert halls in use through a side door. 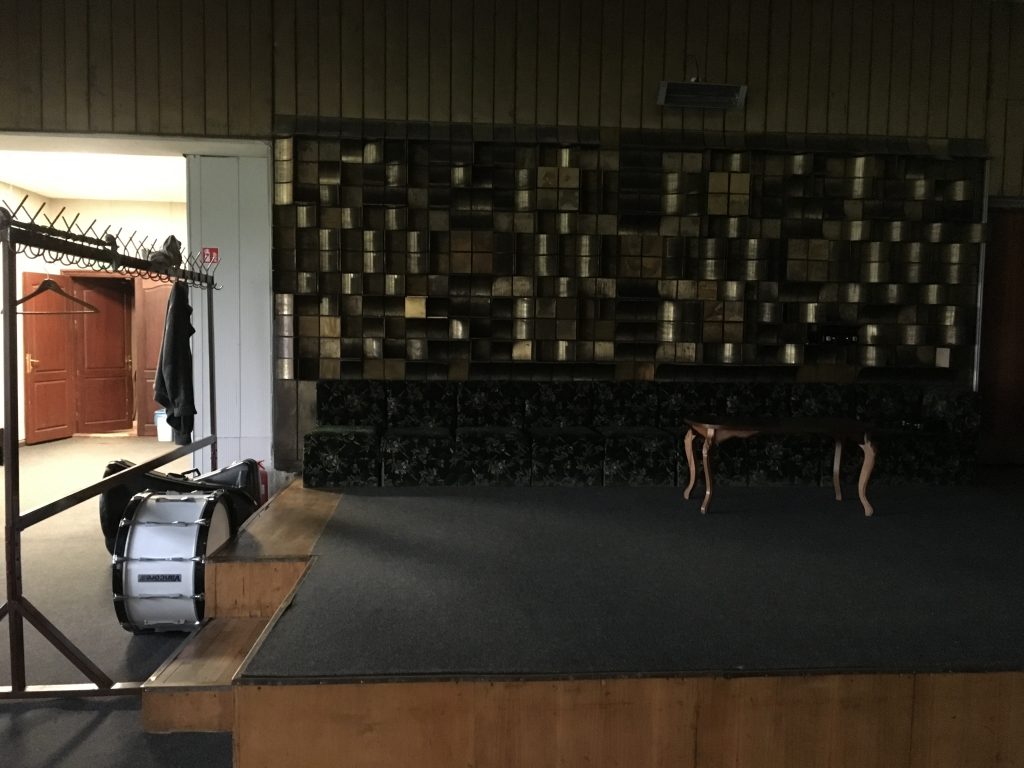 Would I recommend this tour?

While the tour was short (only 3 hours) it ended up being the highlight of my visit to Vilnius. Not only do I love seeing filming locations for any movie or TV show in real life, but I also enjoyed the guide’s history of the soviet era. It wasn’t like a textbook or what you read on the internet, the tour guide was really honest and had so many stories to tell.

We were supposed to visit the KGB Museum as part of the tour but on the day we booked it was unfortunately shut. Despite this, I still recommend doing this tour.

If you’re interested, I did the tour through Vilnius With Locals (they were the only tour company I could find offering this tour at the time of my visit). And no, this is not a sponsored post. I didn’t even tell the tour guide I’d be writing a blog post about the tour.

At the time of booking this tour, the guide told us it they’d only run the tour a few times before ours so just keep in mind they may have modified the itinerary a bit since I went.