The Baltic countries are cheap to visit and cheap to travel between. You could go to the hassle of getting the airport, going through security, worrying about the stingy bag limit (20kg per person on Air Baltic) OR you could take the Lux Bus. 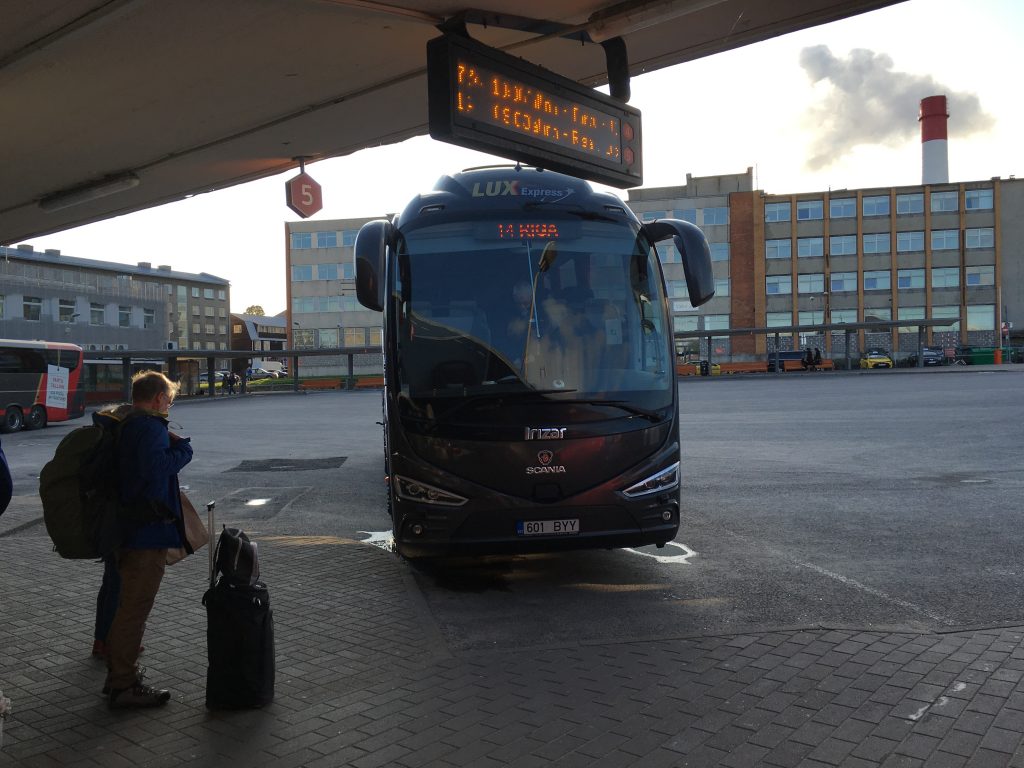 Why I liked the Lux Bus 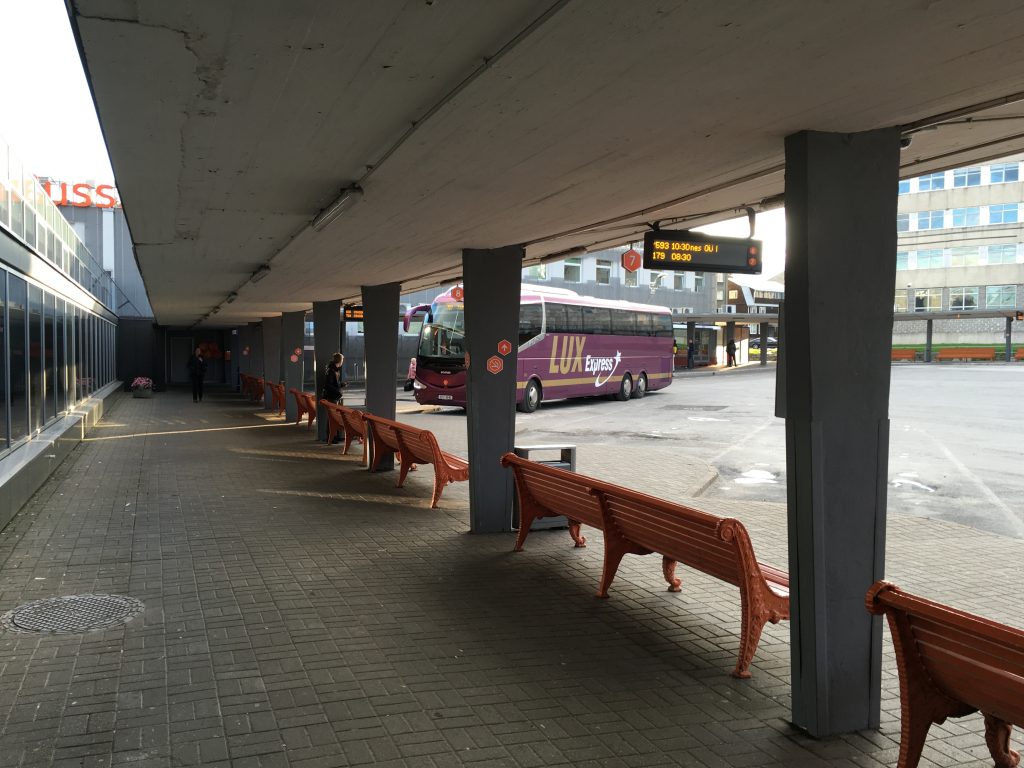 There was a toilet inside the bus station (it was either 1 to 2 euro – I can’t remember). 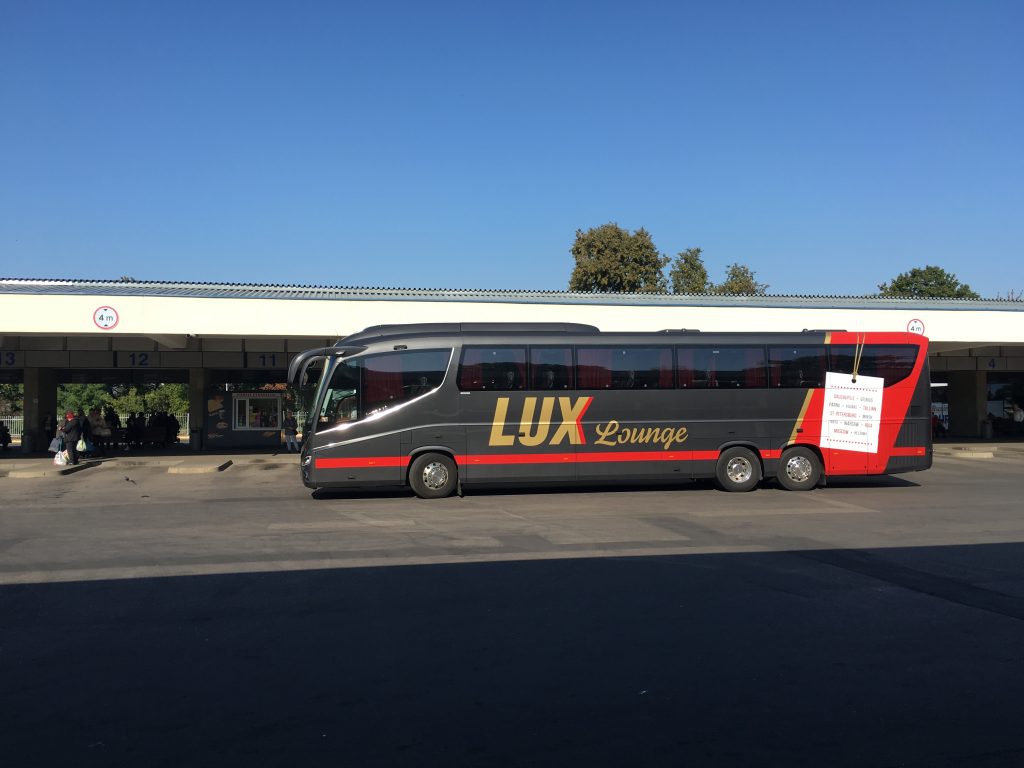 I pre-purchased the ticket online. You might be able to purchase on the spot at the bus station but I didn’t do this so am not sure.

You can take an overnight bus, one during the day, go from Tallin (Estonia) straight to Vilnius (Lithuania) without getting off at Riga (Latvia) in between like I chose to do. There were a few other stops at smaller bus stations on the way. Not enough time to get off the bus but perhaps they do this for longer bus rides.

Inside the Lux Bus 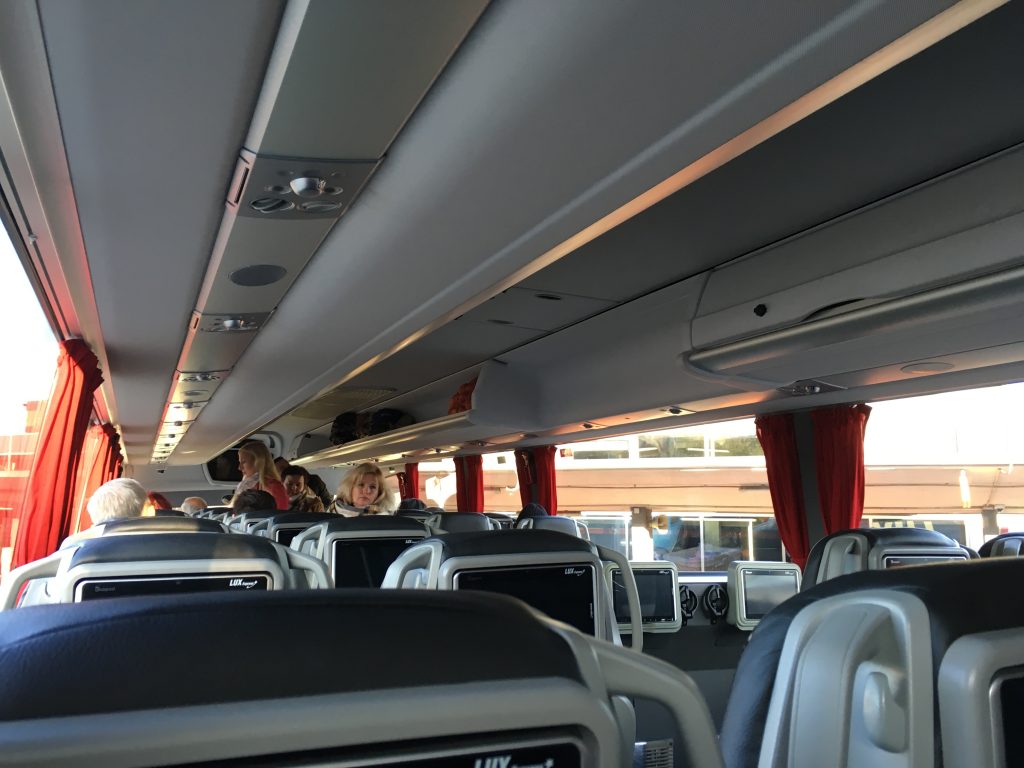 The back of each seat had a TV screen with heaps of movies and TV shows (as many as you’d see on a plane) – most had English captions too, plus you could use the internet (albeit it was slow and did drop out sometimes).

I got to choose our seats when booking i.e. assigned seating but since the bus was only 1/3 full my family spread out (2 seats for each person). 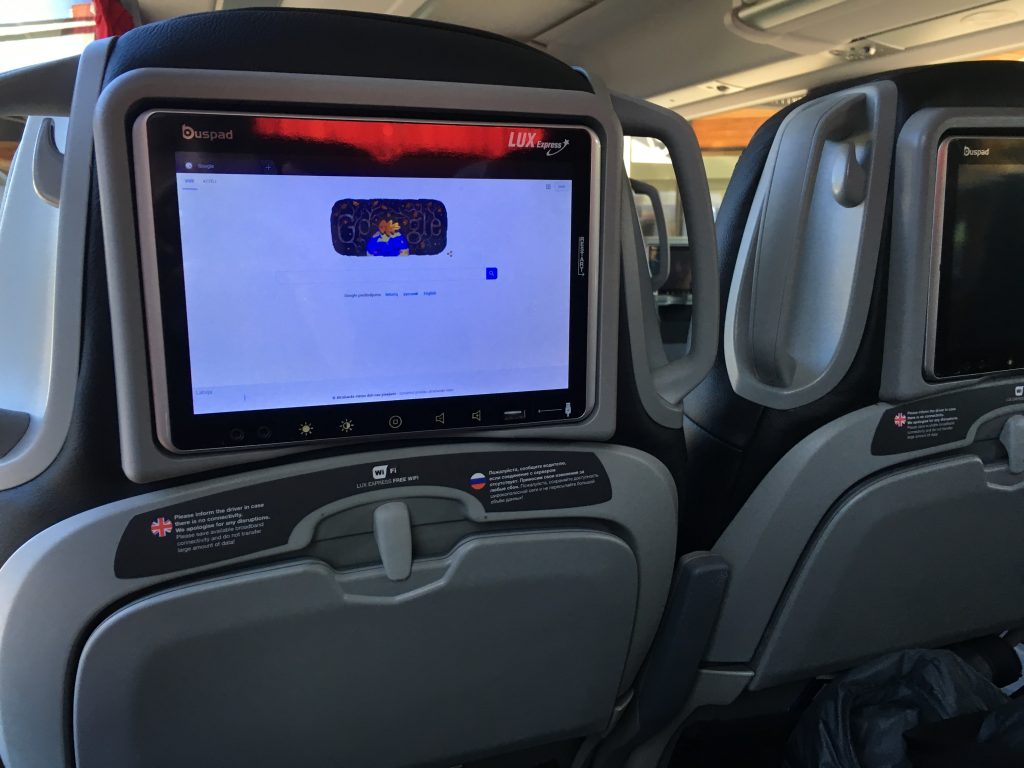 They store all of your luggage (checked bag size plus carry on bag underneath). The only thing you keep up top with you is your day bag / handbag. Just make sure you get everything out that you’ll need as it looked like they were only loading bags on at each stop and there wasn’t much time if you were to request they get something out of your bag.

Would I take the bus or fly?

I had the unfortunate experience of having to fly Air Baltic from Vilnius (Lithuania) to Amsterdam – it was the only airline option. I found the staff at the airport seemed to only think there’s one way to do something and that way must be followed.

Very strict luggage restrictions, brisk staff that don’t even say hello when you get to the ticket counter or board the plane, crappy flight time (departed 8:30am and was the only option that day which means a really early wakeup to get the flight), no water on the plane, a small cramped plane (one of those really loud propeller ones). There was hardly any aircon and no room to take off and store winter jackets. I felt queasy the whole flight (which never happens) – I was so glad to finally get off the plane.

Air Baltic were so strict with the luggage limit. Only 20kg per checked bag and 7kg for your carry on. That 7kg was to include your carry on and personal bag. If you want to purchase extra lugagge you needed to do so sooner than 48hrs before your flight. Since we just missed the time cut off and knew our bags were over 20kg (each of us was travelling for between 4- 7 weeks), we decided to make 1 bag overweight and keep the rest under the 20kg. I was so glad I’d spent $20 on a digital bag weigh scale before we left home so we could test the bags before we got to the airport. We were Googling in the hotel room the night before to see if they’re strict. As expected, there were tons of reviews of people complaining about the bag limit – that their bag was only 200g only and they got slapped with the fee. Someone even said they weighed their winter coat with their carry on luggage so they could slap them with an overweight bag fee.

We decided to send my sister’s overweight bag first and thankfully they were so distracted eagerly telling her how to go pay the 50 euro heavy baggage fee – yep Air Baltic charged 50 euro if you’re over the 20kg checked bag limit (on top of the baggage fee you already paid when you booked the flight) AND another 60 euro is your carry on bag if over the weight limit. So you better shove everything into your checked bag to avoid paying the fee twice. I managed to sneak through with my carry on suitcase plus cross body bag (which were about 9kg as I travel with a small laptop).

Make sure they add tags to your carry on bags at the bag drop counter, as they were re-weighing bags at the gate before boarding. There was quite a few heated discussions between passengers and ground staff as they made people go to another service desk to pay the 60 euro overweight bag fee, then they had to run back to board the flight before it closed. The flight crew made it clear to passengers they weren’t boarding the flight until they presented the receipt for their overweight luggage and weren’t going to hold the plane while they went and paid.

I’m never flying Air Baltic again – I’ll change the entire itinerary if I have to! If I ever visit the Baltics again I’d rather a long bus ride to Warsaw and fly out of there. Or get the bus to Tallin and fly Finnaiir.

Long story short if you’re going to the Baltics – take the bus!

The costs mentioned in this post were current as of 2019. Air Baltic and Lux Express bus fees may have increased since then.