I always use the same style of dot grid notebooks and I must admit, it’s a slightly-annoying-first-world-problem when the first few and last few pages don’t completely lay flat because of the binding. So I wanted to try this little stitched notebook from this Erin Condren Haul.

For small notebooks like these, I don’t do 2 columns vertically – too narrow! So I rotated the page landscape ways.

The dot grid spacing is slightly more than the 5mm most dot grid notebooks have (not quite 6mm but closer to 6mm than 5mm). It looks like they’ve changed the dot grid to 5mm since I purchased this notebook. 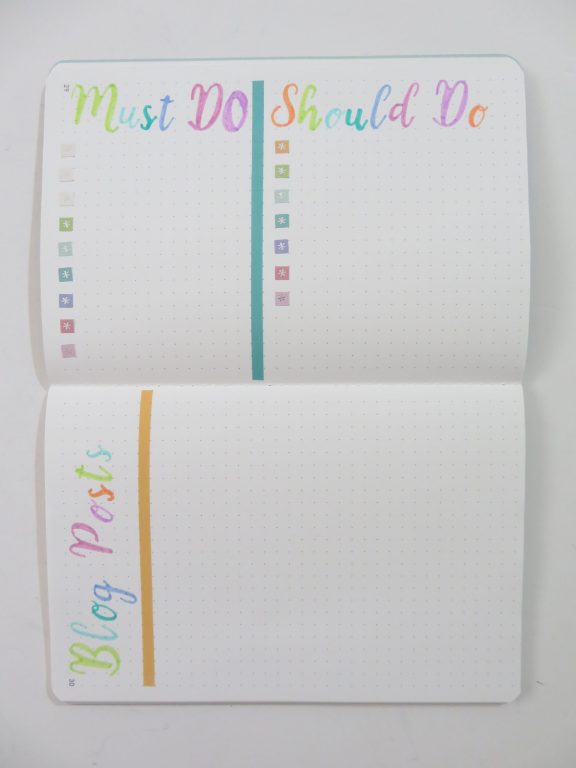 My verdict on the stencils? They’re ok but time consuming and you do need to do some manual fix ups. It took me around 15 minutes to do the letters.

Look how bendy it is – I was expecting sturdy, hard, non-bendable plastic. This just feels like a cheap quality stencil with an expensive price tag and packaging. 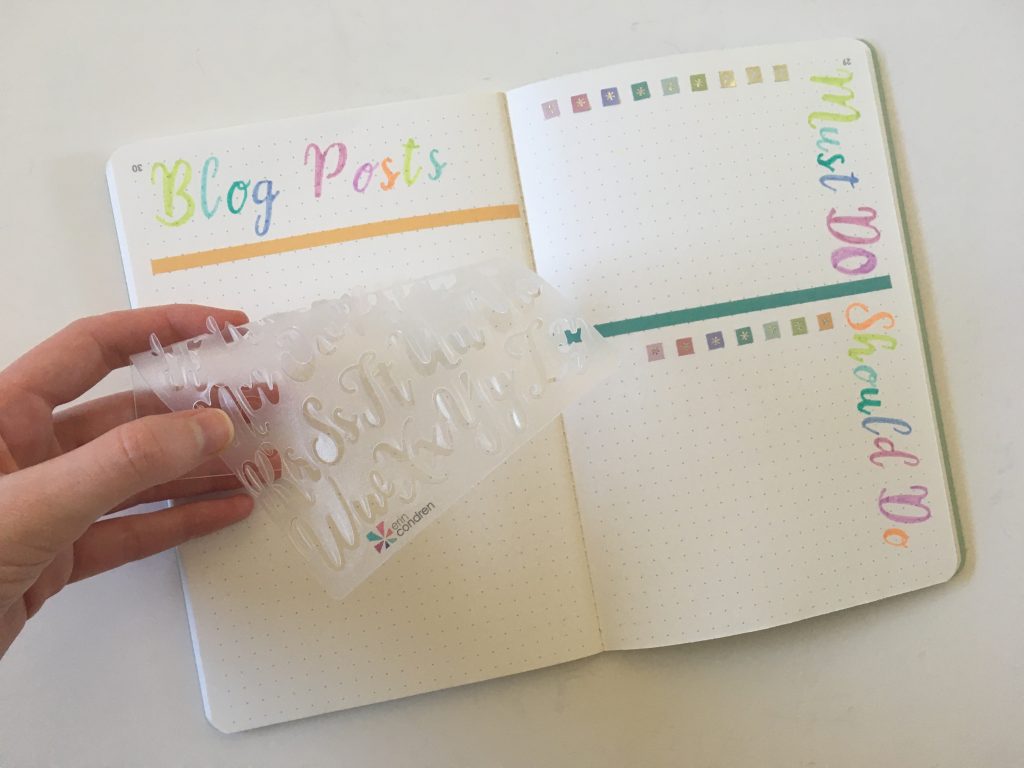 I don’t understand why some stencils are like this – with awkward gaps you have to manually join by hand to make it not look like a stencil… But then the ink pools anyway and it looks like you used a stencil.

I ended up just free-handing the o’s, the stencil o has no resemblance to a real letter o. 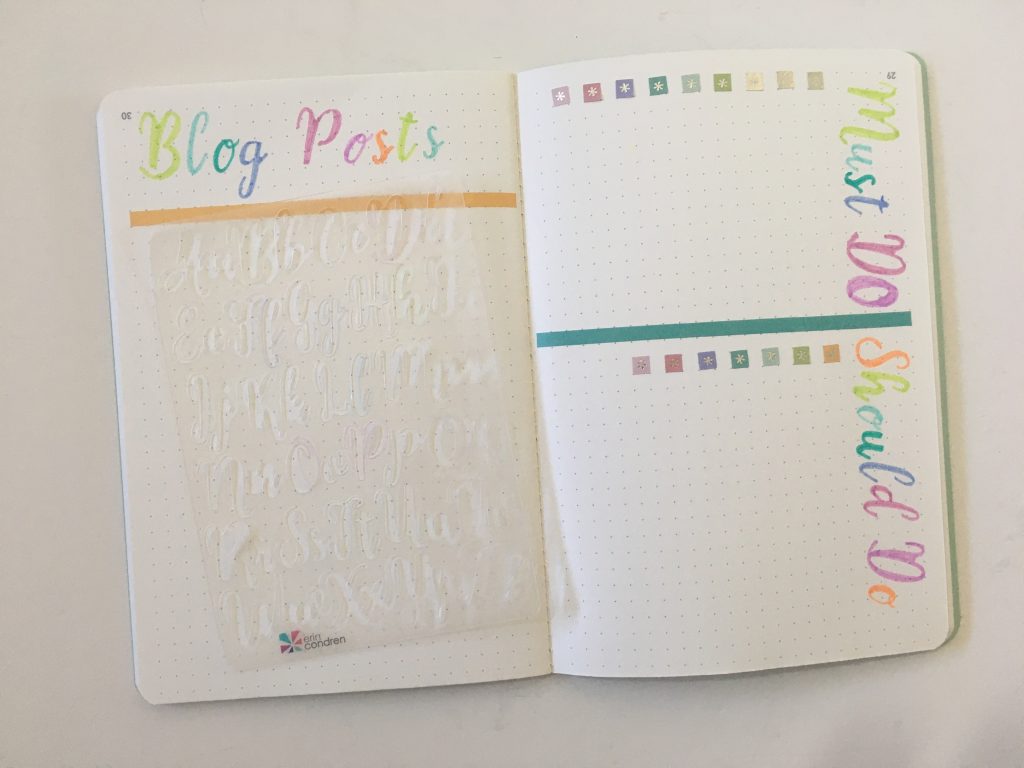 I thought about placing the stencil backing (the cardstock that has the letters printed on it that comes in the packaging), but the paper is thick enough that you can’t see through (but you can still see ghosting from highlighters, pens and even the big stickers). 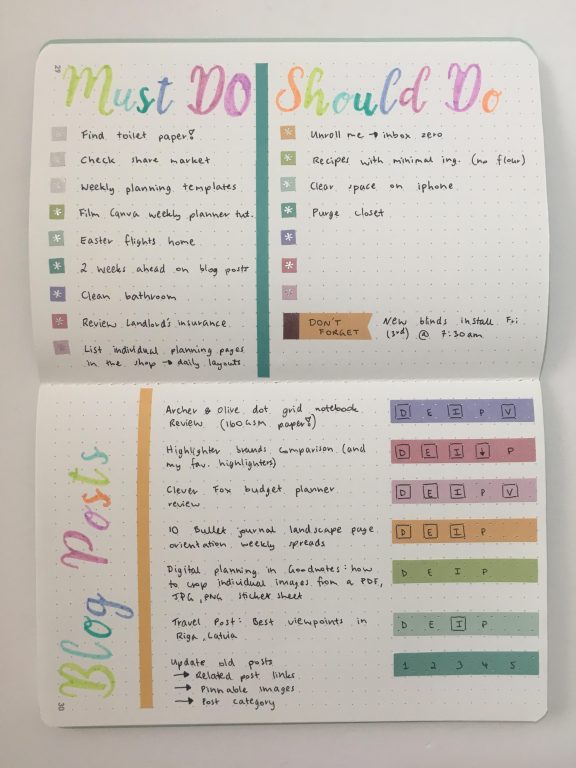 Stencils are risky… if your hand slips, it’s obvious if you use whiteout. I was super careful and used the thinner end of a dual tip highlighter. It ended up being the perfect thickness to not require going over a second time like you would with a normal pen (or even a dual tip pen).

All of the stickers are from Erin Condren. They suggested using these rectangular ones vertical for lists, but I opted to flip them and use for blog post workflow instead (I drew the box if the task was complete). I like how this turned out and would use these stickers again! 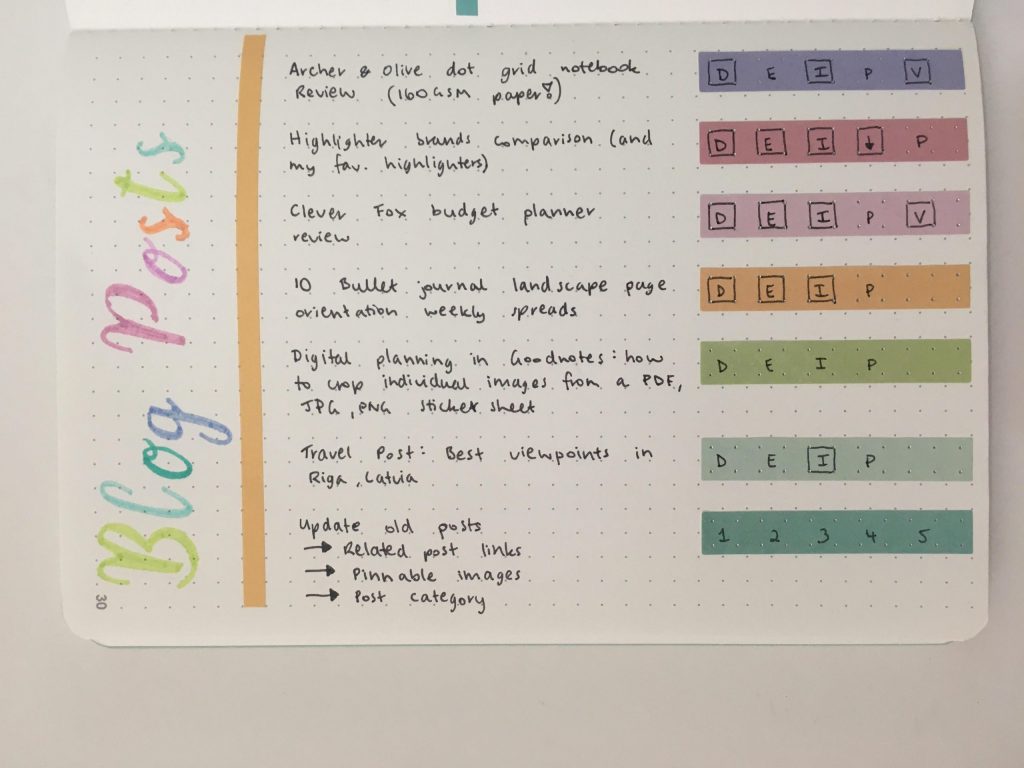 I quite like these stickers and wish they came in full sheets of just the rainbow asterisks. 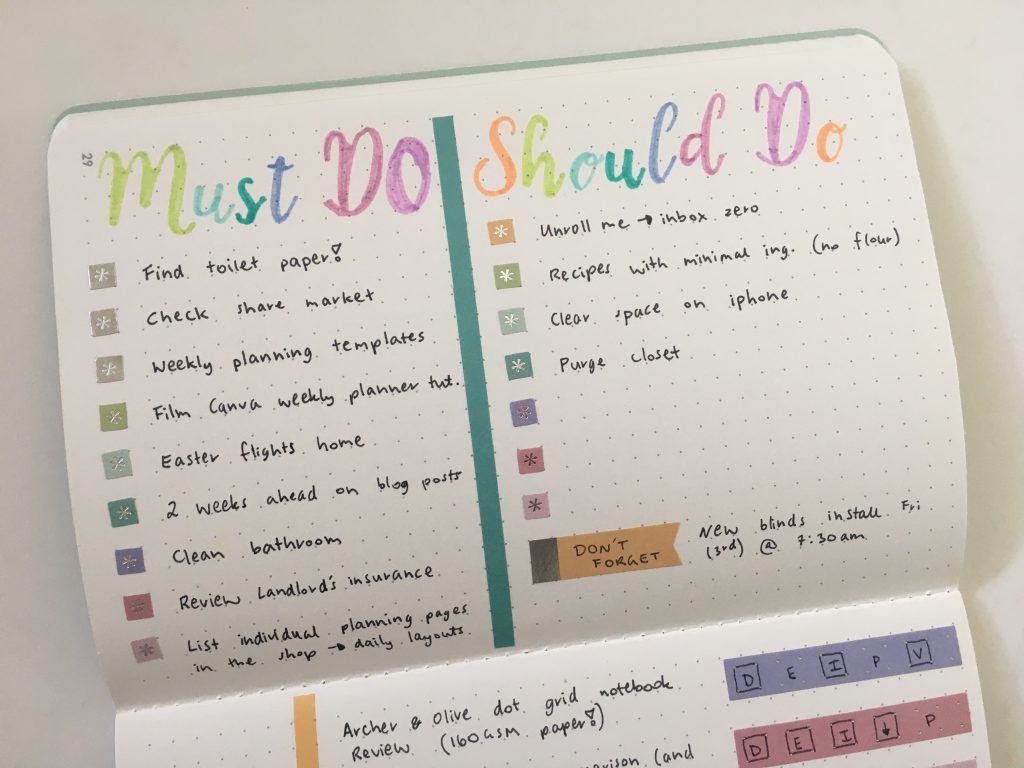 I always default to silver gold foil or glitter washi tape and while I’m sure that would’ve looked great with the silver foil stickers, I wanted to use something different. I had just gotten this washi tape (with the intention to use it in a spread with the Stabilo Boss pastel highlighters which I may still do in the future), which ended up being a close color match with the stickers. 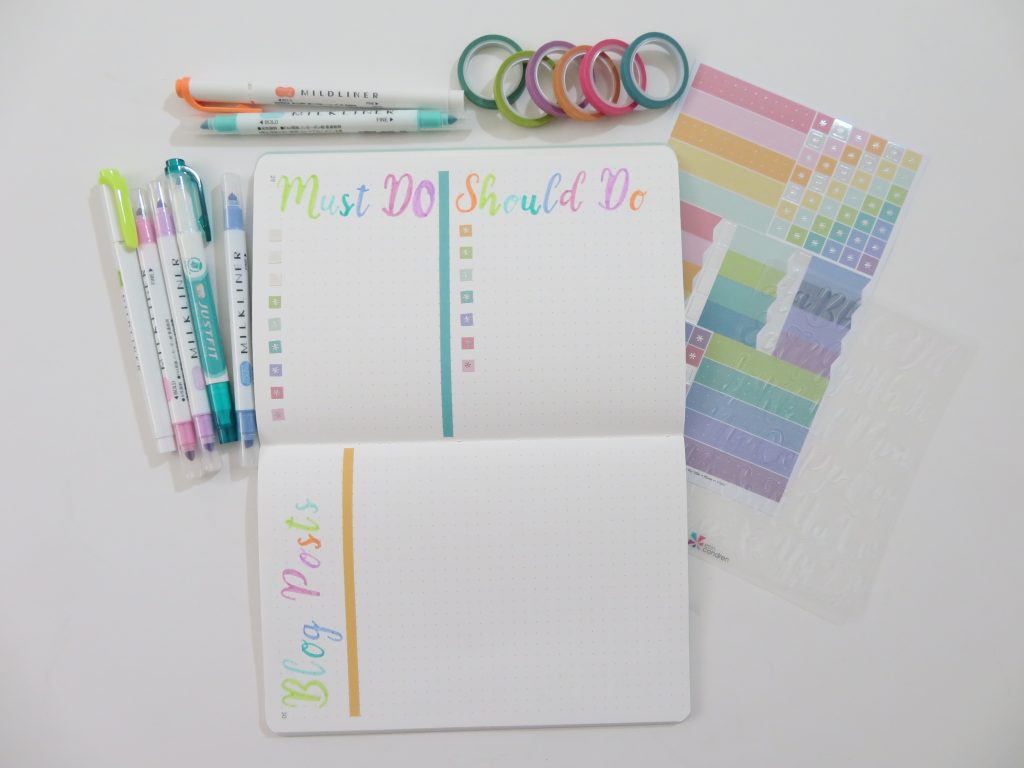 Pros of this weekly spread

Cons of this weekly spread

Would I use this notebook again?

I like the notebook and the fact that it lays flat on it’s own, as well as the affordable price tag (only $9 USD, plus there’s frequent sales nowadays that you might be able to get it even cheaper), but I wouldn’t go out of my way to do an Erin Condren order just for this notebook.

I like the stickers, but they’re over-priced ($5.50 USD for 2 sheets) for being mass produced I’d expect them to be a bit cheaper.

I like the idea of a calligraphy stencil and if the plastic was sturdier with the letters punched through properly then I’d be more likely to use this stencil.

Overall, I like the products and I like how the spread turned out, but it was time consuming. I may replicate elements in other spreads e.g. maybe just 1 calligraphy heading to save time.

If you prefer a more traditional sewn bound notebook, see my review of the Erin Condren dot grid notebook here. 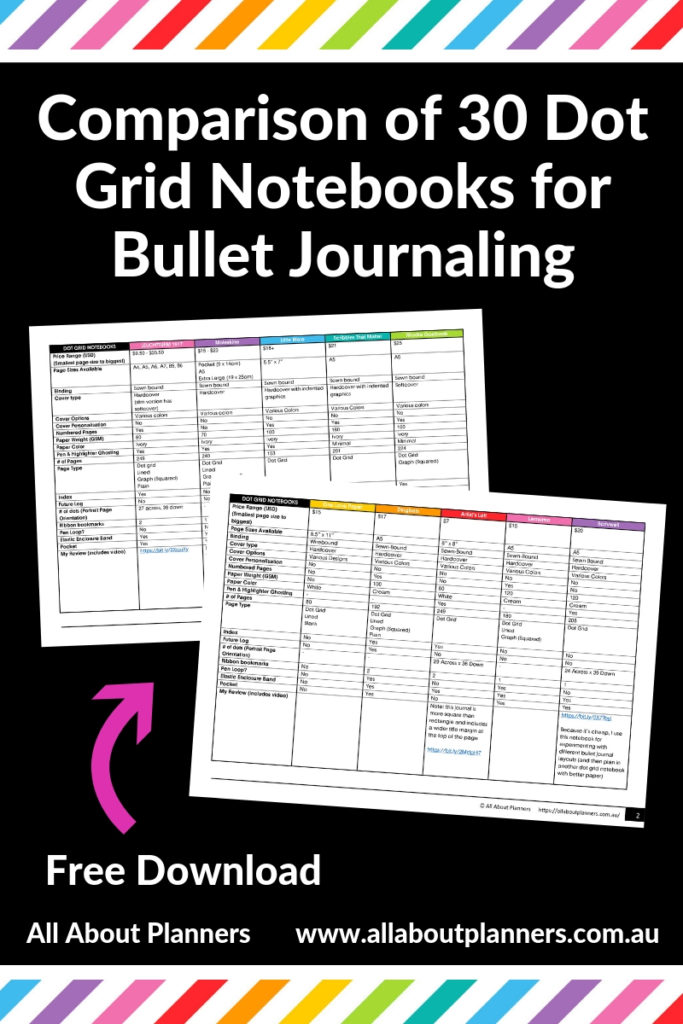