One of the most popular day tours from Vilnius is a 30 minute drive to Trakai Castle. Since we didn’t want to drive in a foreign country we opted for a half day tour.

How to get to Trakai Castle

While we took a guided tour, you can get the bus or train from Vilnius to Trakai. The Vilnius with Locals website has some great directions on how to get there and how much it should cost. If you do go the self-transport instead of private tour, you probably won’t be able to go to all the manor houses I went to (I’m not sure if there’s public transport links nearby), and you’ll likely need a full day by the time you wait for public transport, walk through town to the castle etc. For this reason we opted to save time and see a few more manor houses via private tour. Plus we knew hardly anything about Lithuanian history so going with a guide I feel we learned a lot more than if I was to go by myself and just read some information plaques at each location.

I was travelling with my parents and one of my sisters – it ended up being a private tour with just us 4 and the guide.

Trakai Castle. This photo was taken on a September afternoon – timed perfect lighting (for once!) 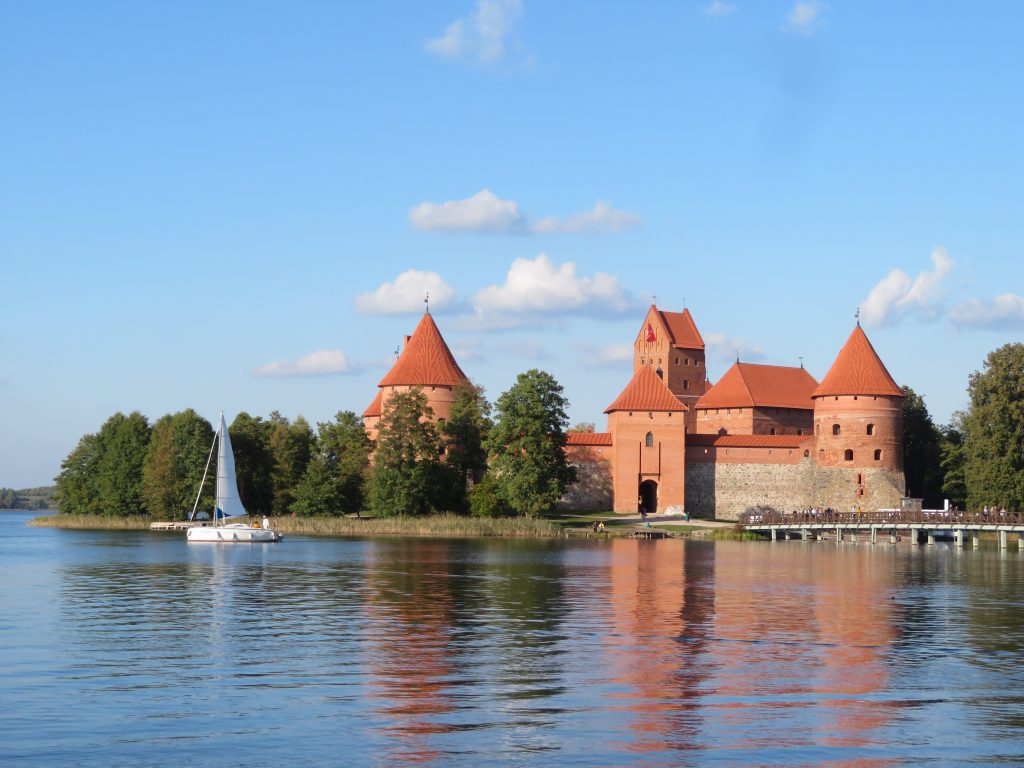 First stop of the day was this manor house that has apparently changed hands many times of the years as people run out of money to restore it. According to the guide the latest owner apparently purchased it for just $1 with the catch that they needed to pay for and complete the restoration by a certain date.

Since it’s being restored I couldn’t go inside, could walk around the manor only. 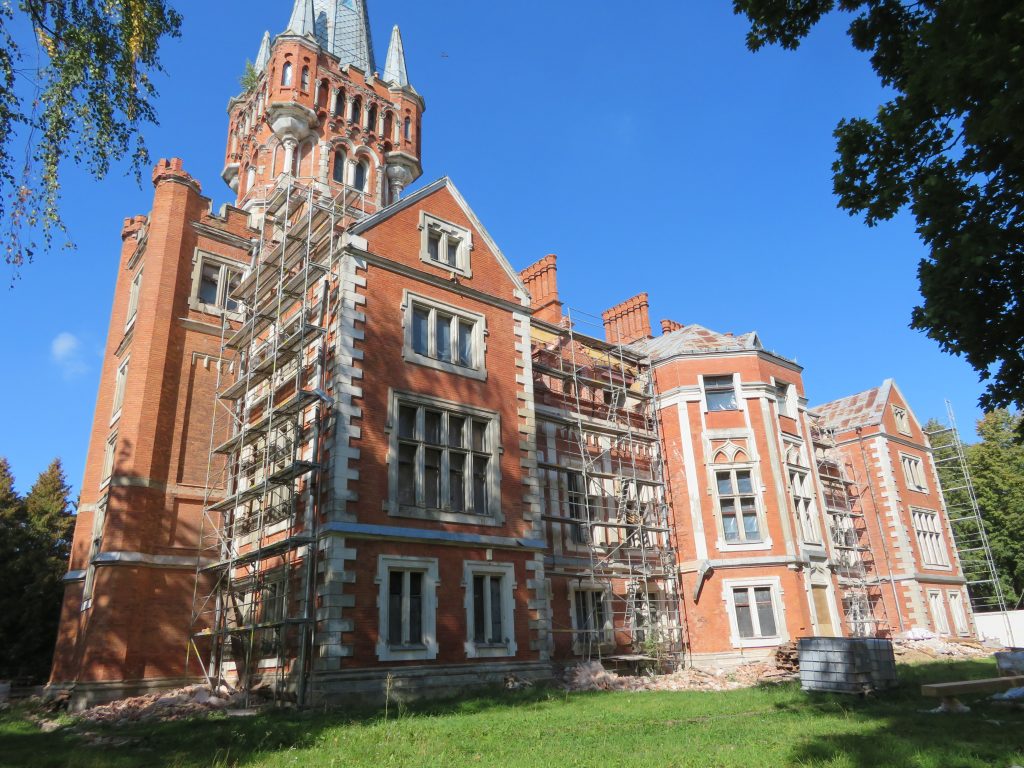 Should look good when the restoration is eventually finished! 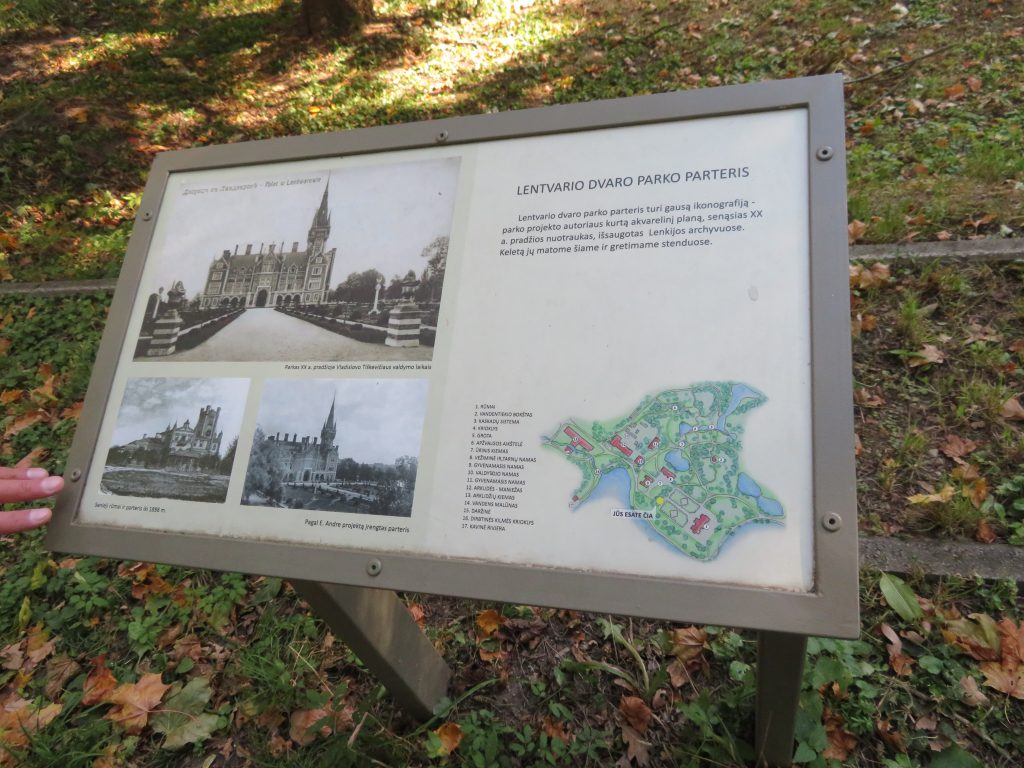 Next we drove to the town of Trakai.

Waiting for a train at the crossing enroute… 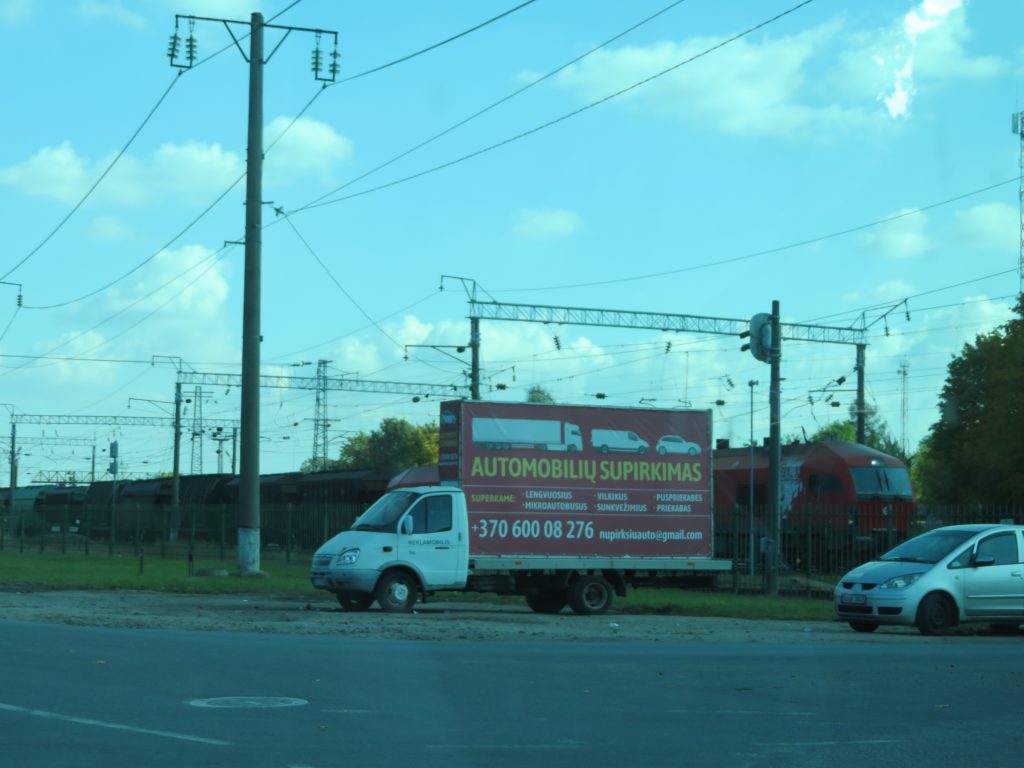 This little town’s Karaite neighbourhood had plenty of timber houses, each having something slightly different about them. These were some of my favorite: 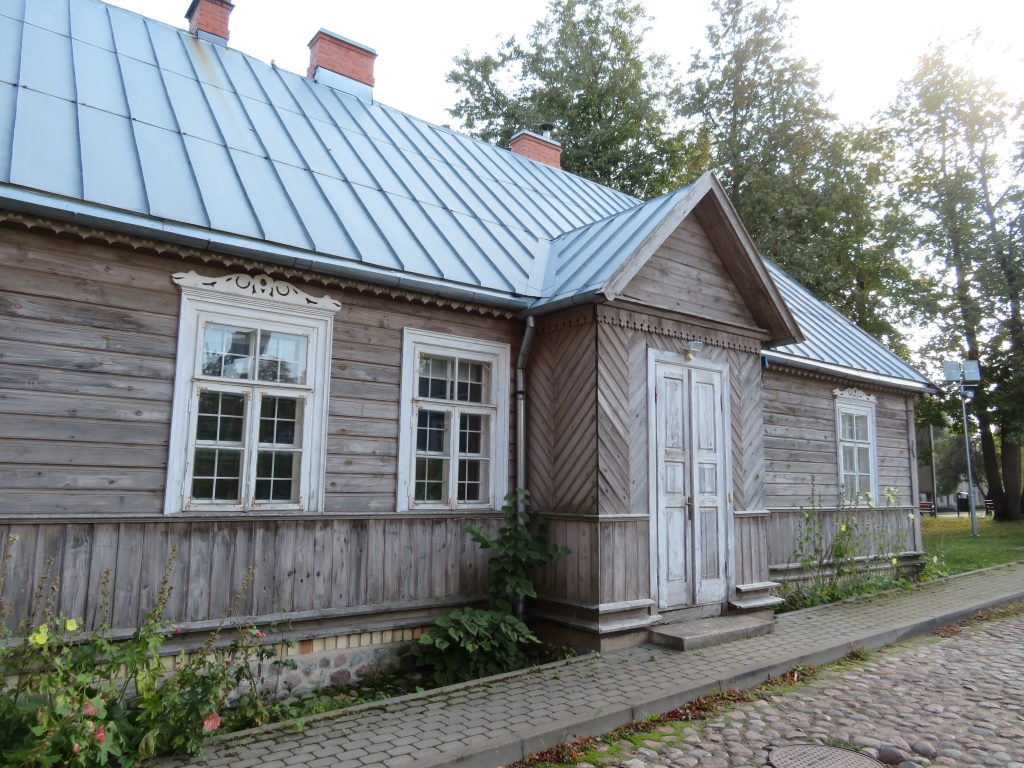 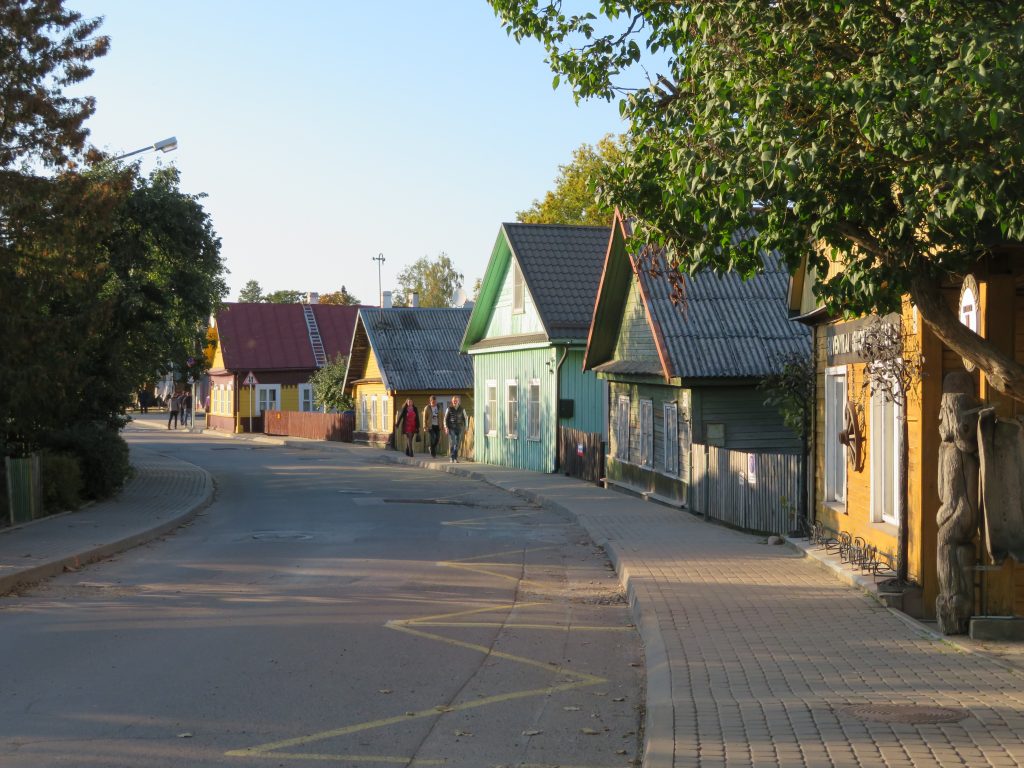 The story supposedly goes that you had to pay big money to the duke if you wanted windows facing the street so not many houses have more than 3. 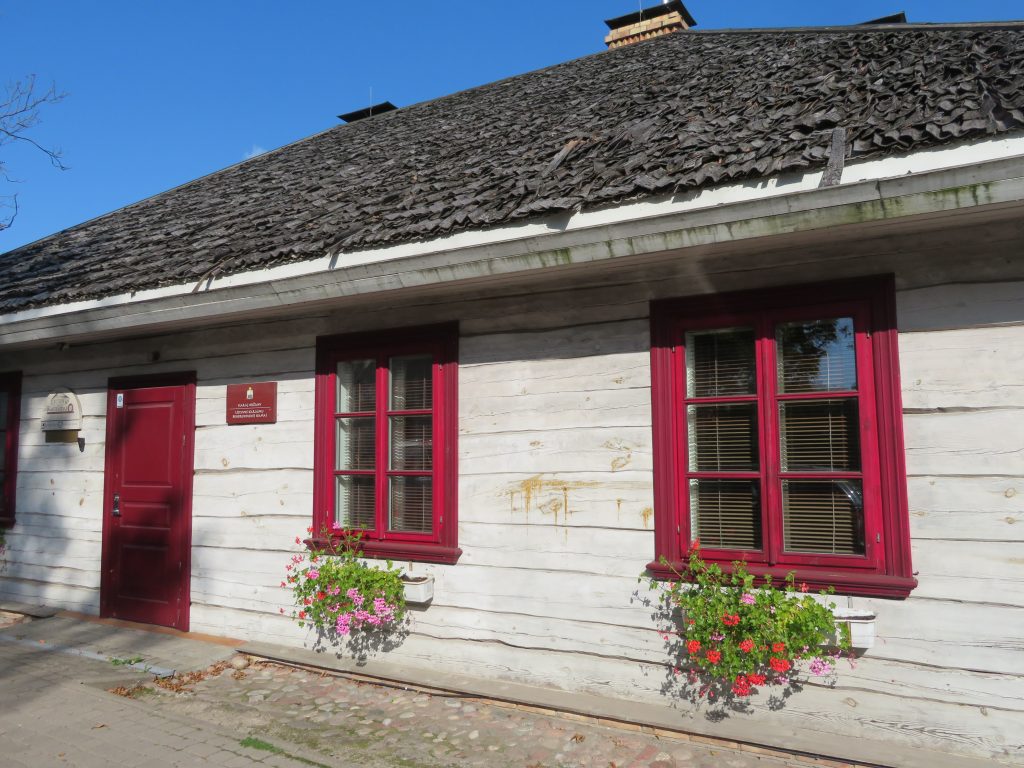 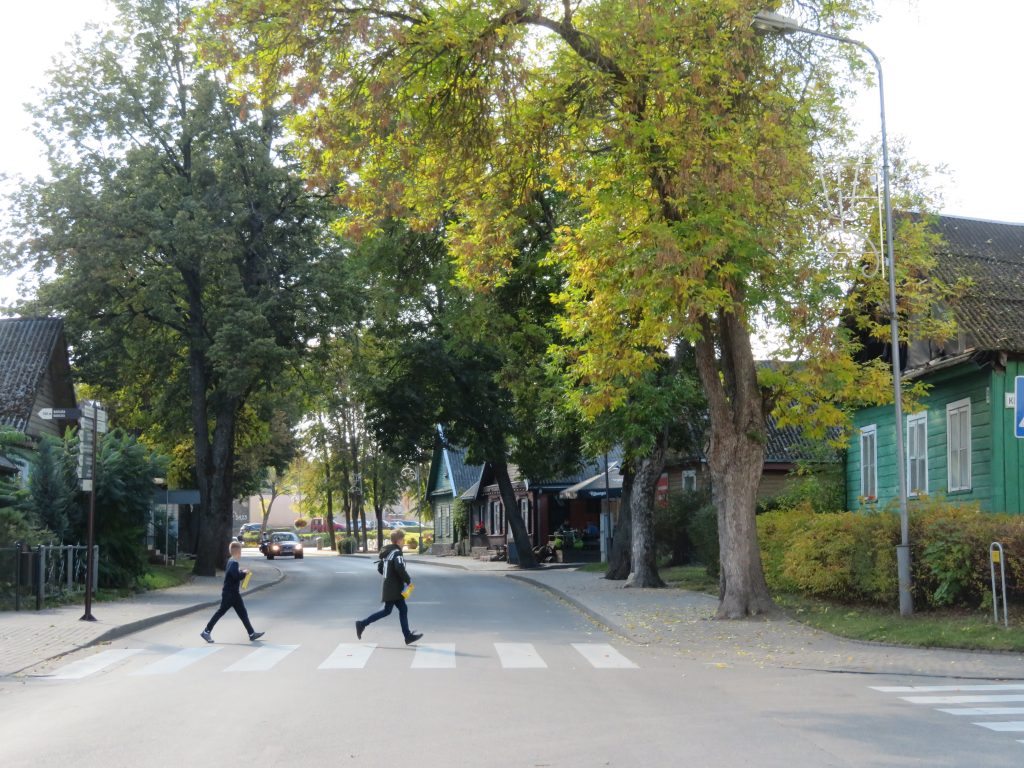 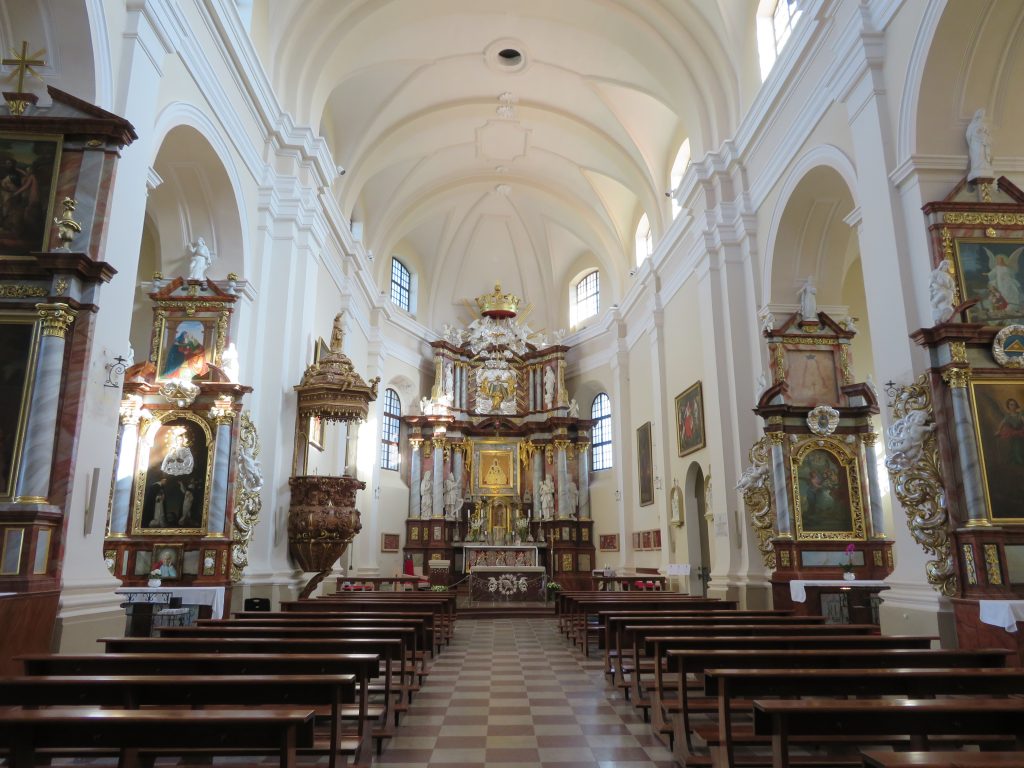 Along the waterfront of the town was a strip of shops and a few food places where the guide recommended we try a Lithaunia food – a Kibinai Pastry. He said the best / traditional version was the ones with meat and vegetables… but once I saw there was a chocolate filled version I was definitely getting chocolate instead!

Yummy but small – I could’ve eaten two in one sitting! 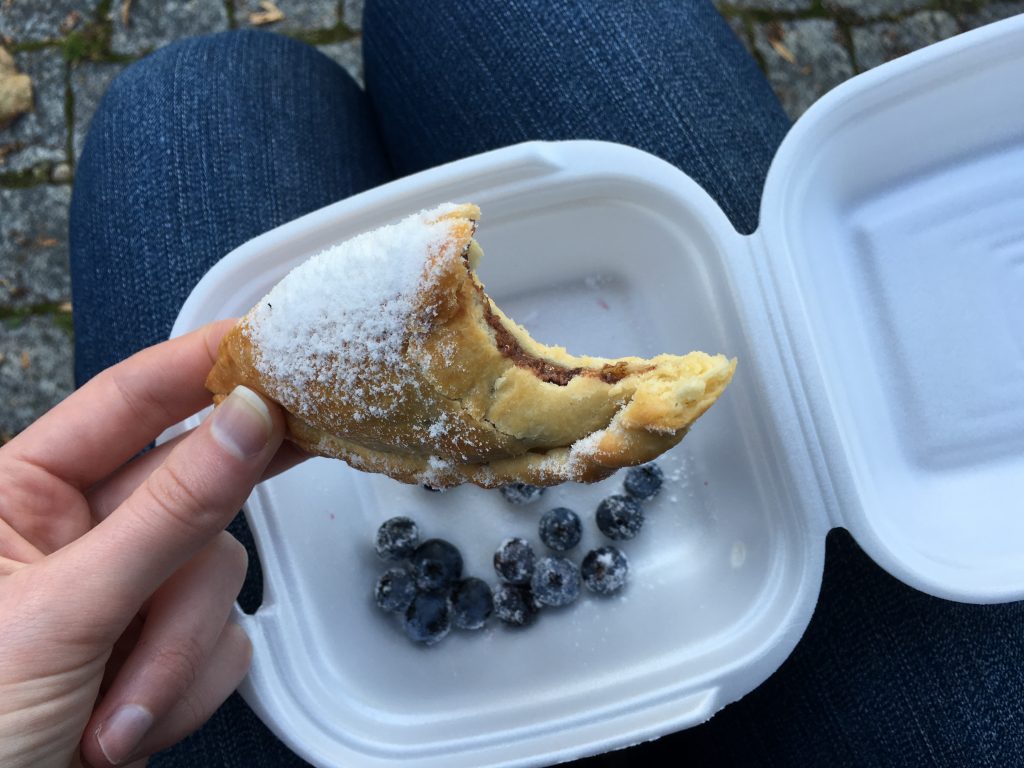 You can find the shop selling these right near the main footbridge to the castle. 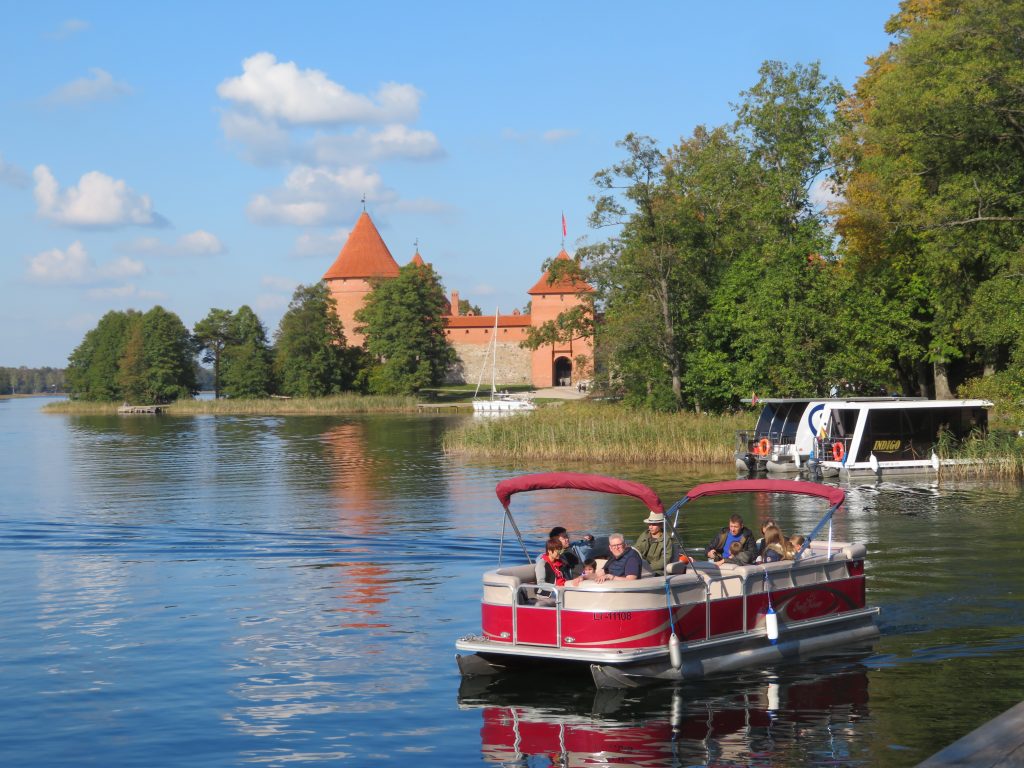 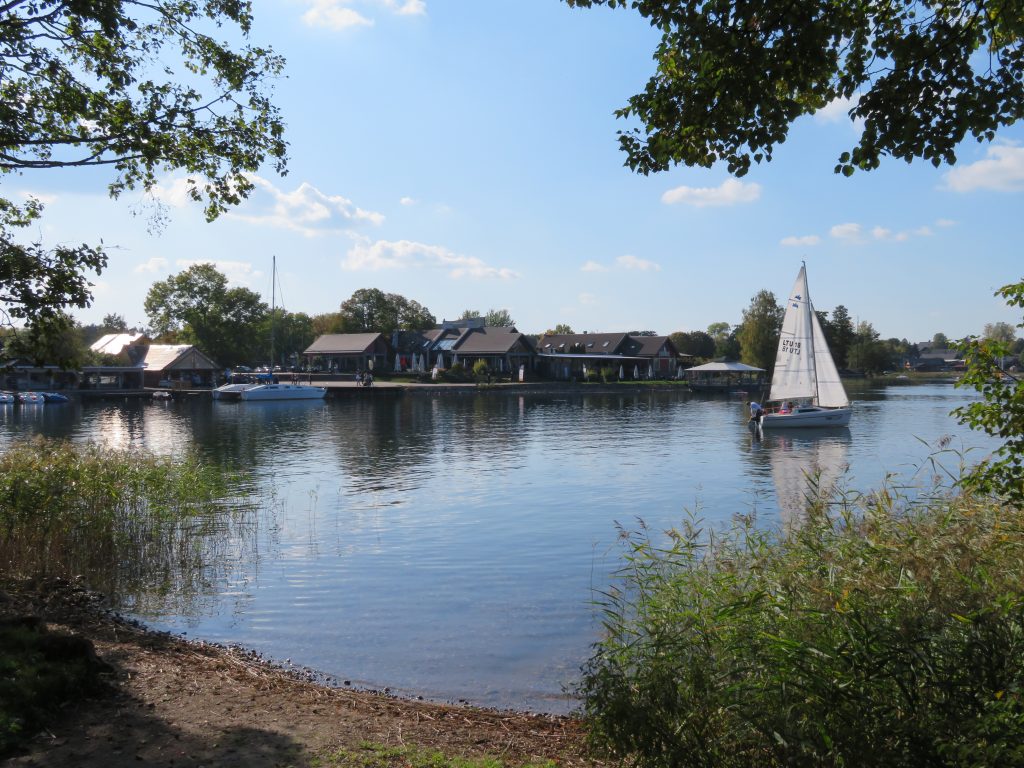 Once you’re on the island you enter the first (main) courtyard and pay the entry fee. From there it takes about an hour to wander around the buildings and walk around the island.

One my of favorite things about the Baltics was the lack of tourists. Almost no one in the courtyard! (I visited at the end of September if you were wondering) 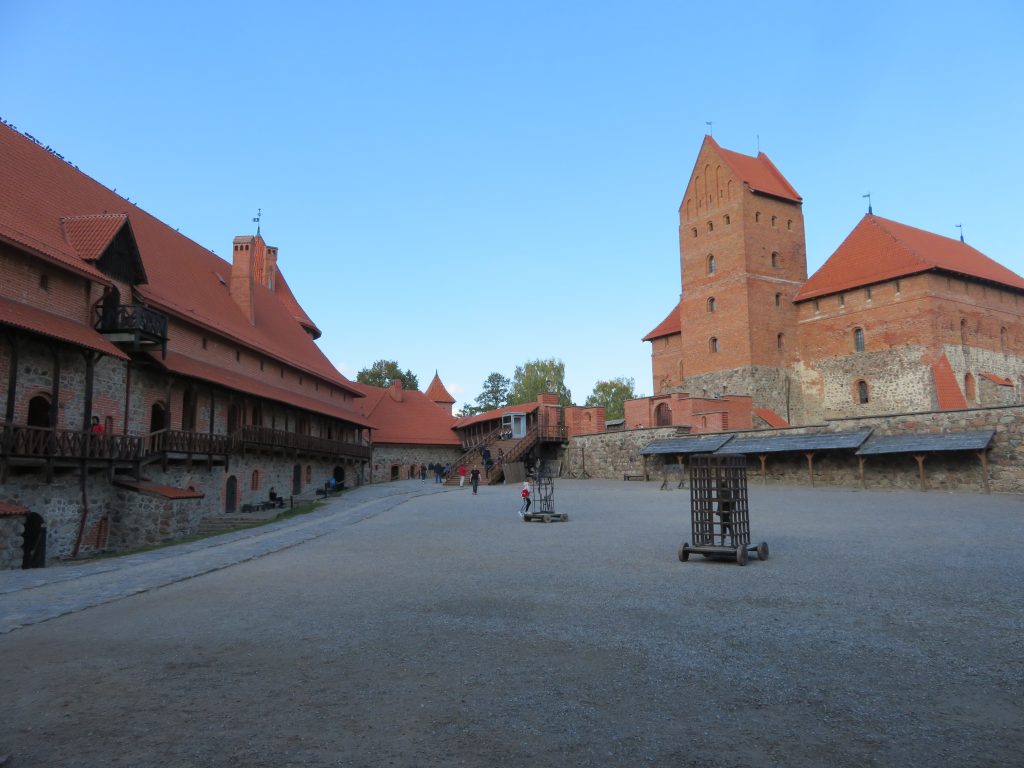 You can go inside most buildings on the island – the main part is on the right of the photo above (up the stairs).

The castle was built in the 1,300’s so of course there have been numerous battles in the hundreds of years since. so most of what you see is a reconstruction of the original.

Inside there’s another courtyard where you can go up a few floors and wander through the rooms with historical artefacts. If you go with a guide they’ll explain everything to you (some things weren’t in English).

There were maps, objects that were stored in the castle (including a lot of coins!), some history about the Karaims, there were a few mini room setups – basically the usual stuff you’d expect to find in a castle. 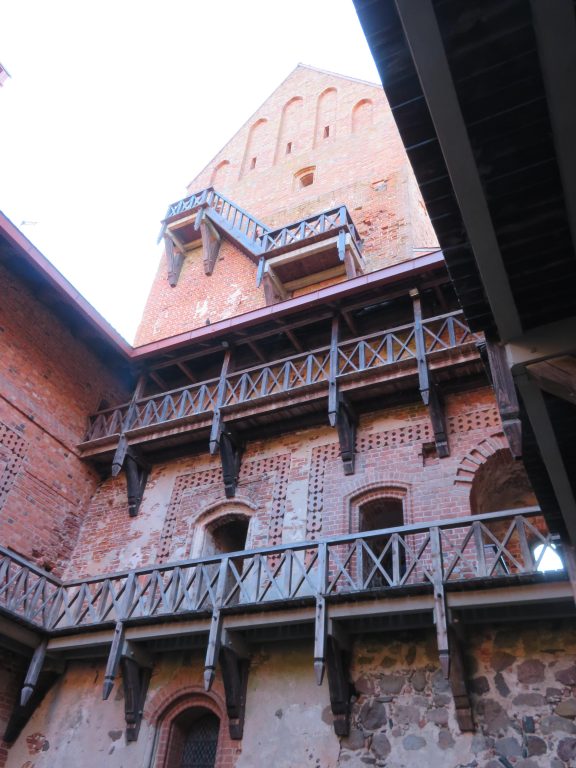 It cost extra to get a special pass to take photos inside of the artefects and based on the tour guides recommendation we decided not to. Honestly there wasn’t anything fancy / picturesque that I felt warranted taking a photo of and most things were securely stored behind glass cabinets that would’ve had a bad reflection in photos.

After the town of Trakai there was one more stop. After a short drive around the lake we arrived at…

You can see this manor house if you take a walk around the Trakai Castle Island (where I took the photo below). 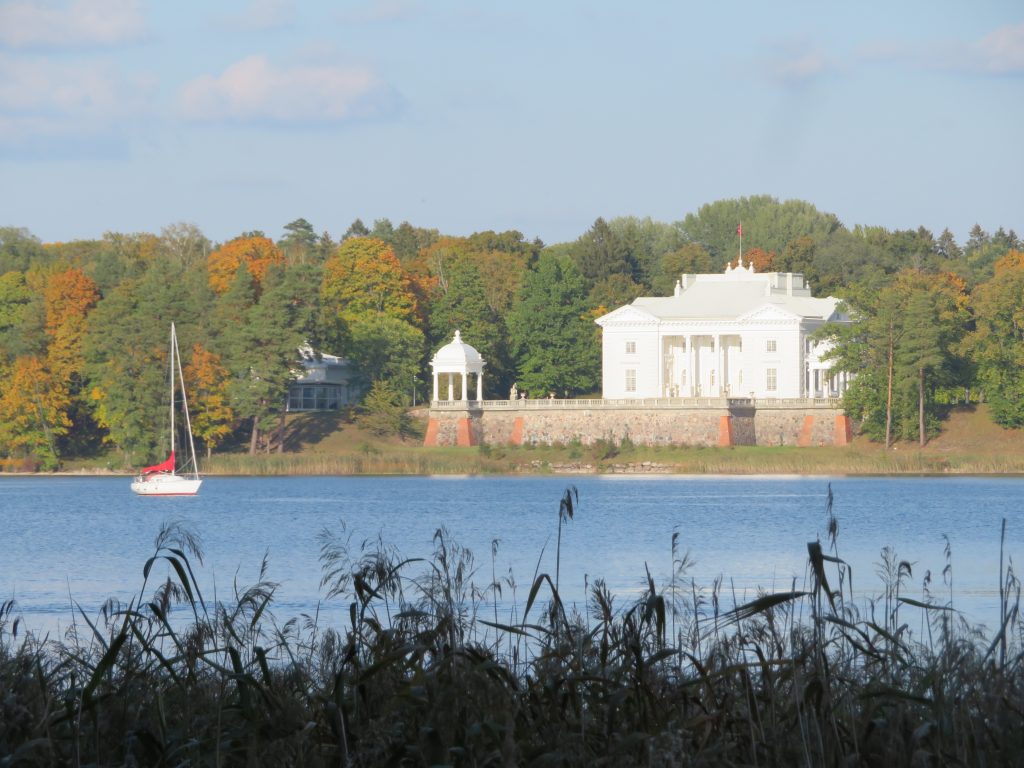 We timed a number of hot air balloons which made for a good photo: 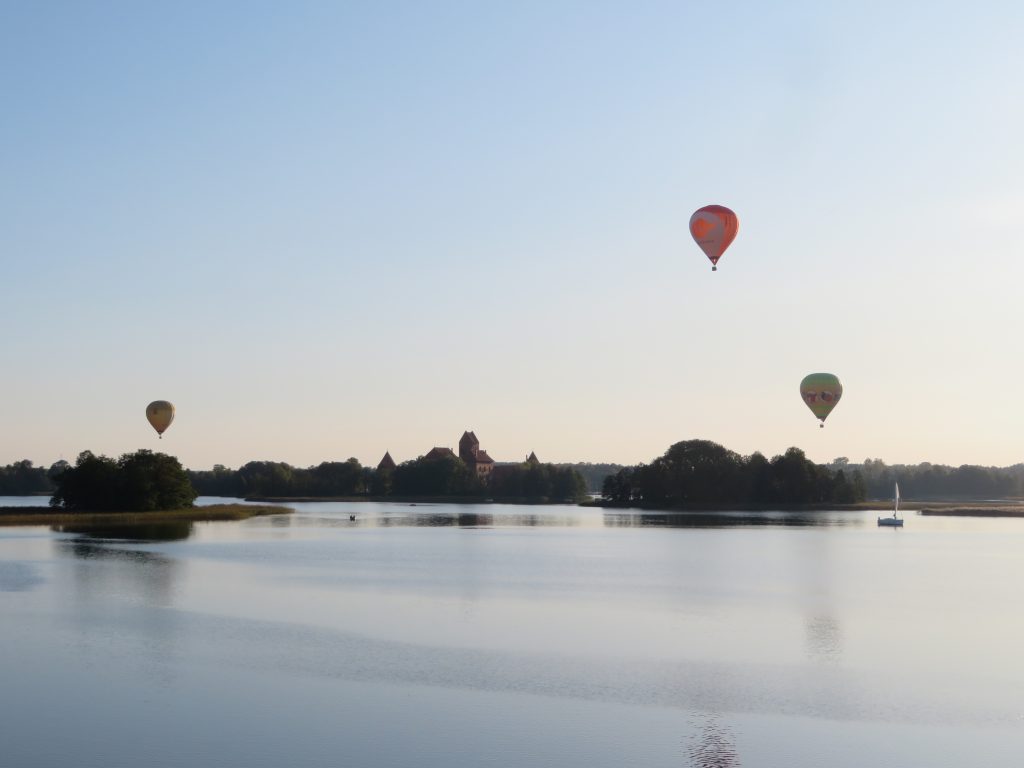 Apparently it’s a popular wedding venue. The inside is only open during summer. 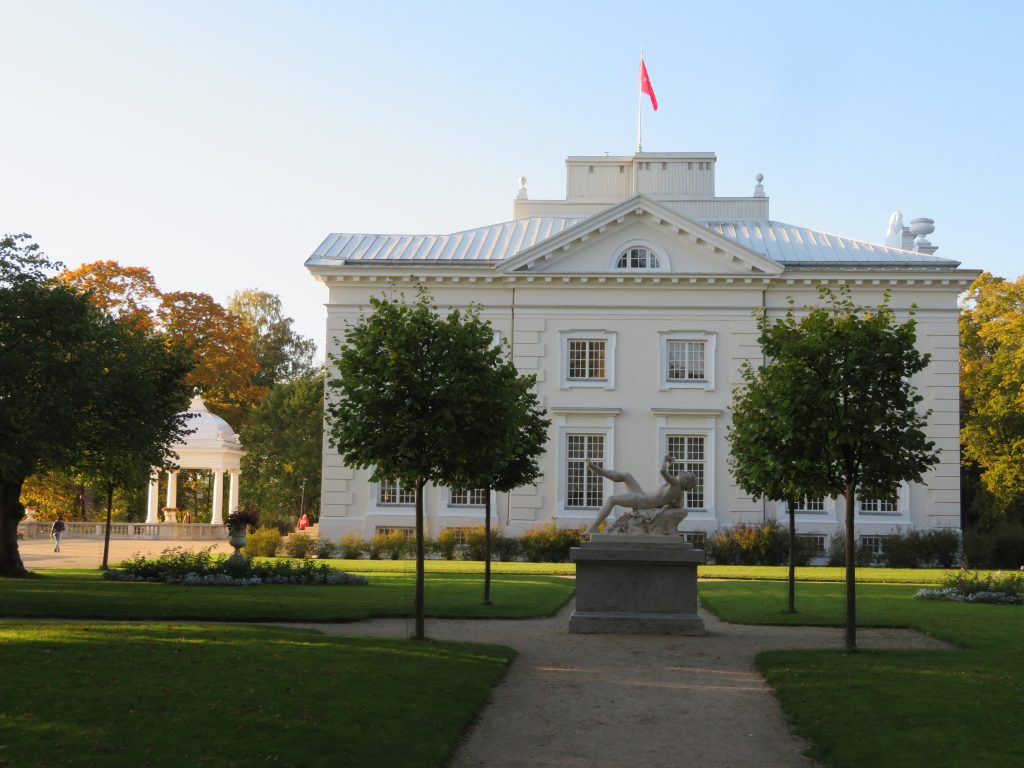 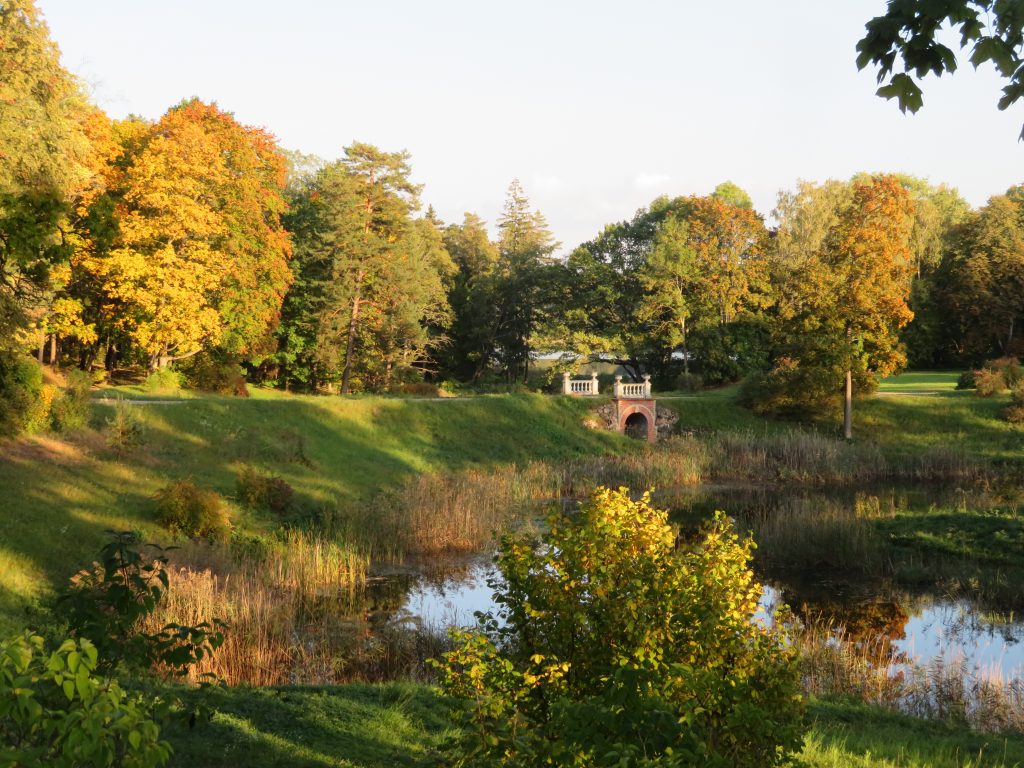 Afterwards we had a short drive back to Vilnius where the tour guide dropped us off at Subačiaus apžvalgos aikštelė lookout where we timed the sunset before a short walk back into town. 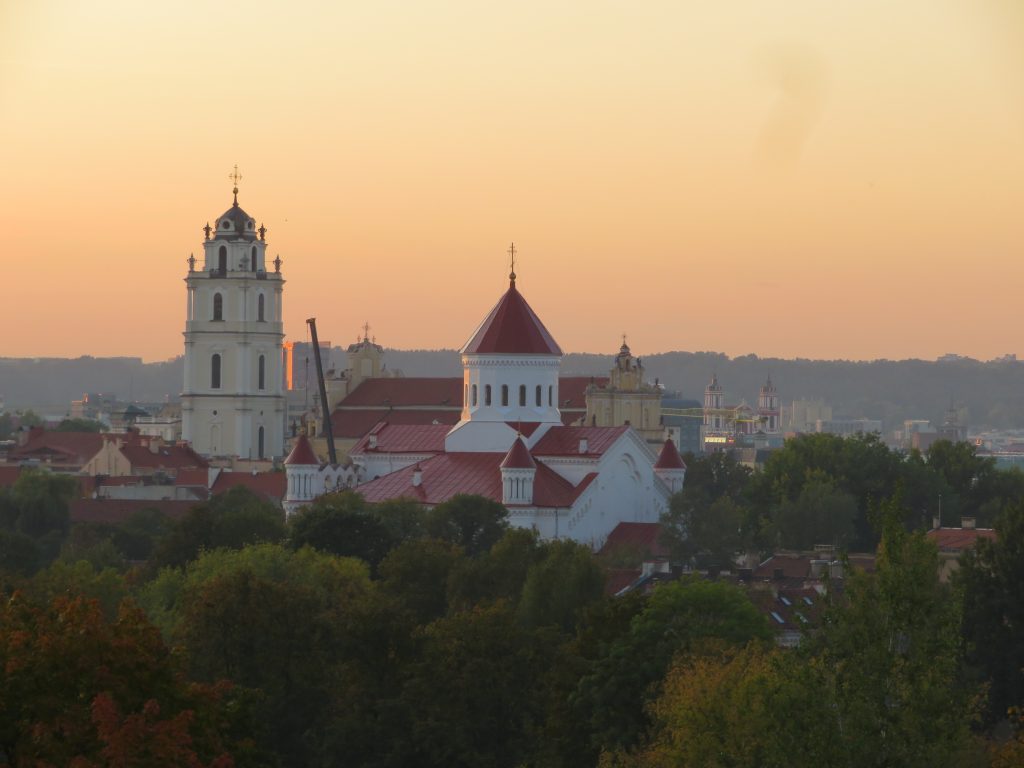 Would I recommend this half day trip?

Yes. I’m obsessed with any and all European castles (we have nothing like them in Australia!) while it’s obviously not Neuswanstein, I like seeing the different architecture of castles in various countries so I do think it’s worth a visit.

After doing quite a bit of research, other than a tour of Chernobyl filming locations there weren’t many day trips from Vilnius that appealed to me. If you have the time I’d do a Trakai half (or full day if you have the time) day trip.

We booked the Trakai Castles and Manors tour via Viator (not an affiliate link, just giving you the link if you want to do the tour). The tour company was called North North East Tours.

We booked a half day tour and when we emailed them on the day after waiting 20 minutes to ask where’s pickup they were like ‘oh you didn’t confirm so we thought you’d cancelled’. We’d reconfirmed the tour as per the booking instructions. They gave the impression they were just going to keep our money and not provide the tour! Eventually the company replied and said one of their guides could do the tour that afternoon. Lucky we had nothing else pre-booked for that day – the tour was supposed to be in the morning.

When the tour guide showed up (on time at the new agreed time) he said his boss had had a miss-communication. I don’t know how you can ‘miss-communicate’ a confirmation and booking for 4 people (who already booked so I don’t understand the need to ‘re-confirm’ otherwise what was the point in booking it in the first place). Plus if we hadn’t re-confirmed and that was a requirement you’d think the company would bother to spend 5 minutes sending an email to ask us if we still wanted to do the tour. Instead we got the impression that the company was trying to keep our money and hoped we wouldn’t realise.

Anyway, the guide (Simas) was very friendly, knowledgeable and enthusiastic about all things Latvian. His timings in each location were great – not too short and not too long.

Note that as is the case with most tours in the Baltics, you pay for the tour which is basically the guide and transport, and if you want to enter the attraction (so in this case, Trakai Castle), it costs extra. Usually the entry fee is a few euro cheaper as you give your cash to the guide and the guide goes and buys the ticket.

All up the tour was around 5 – 6 hours which I think was a good amount of time. The cost was around $160 AUD per person. For 4 of us it ended up being quite expensive – it would’ve been cheaper to just hire a car and go ourselves but if you don’t want to drive in a foreign country, there aren’t many tour options and they’re all over-priced.